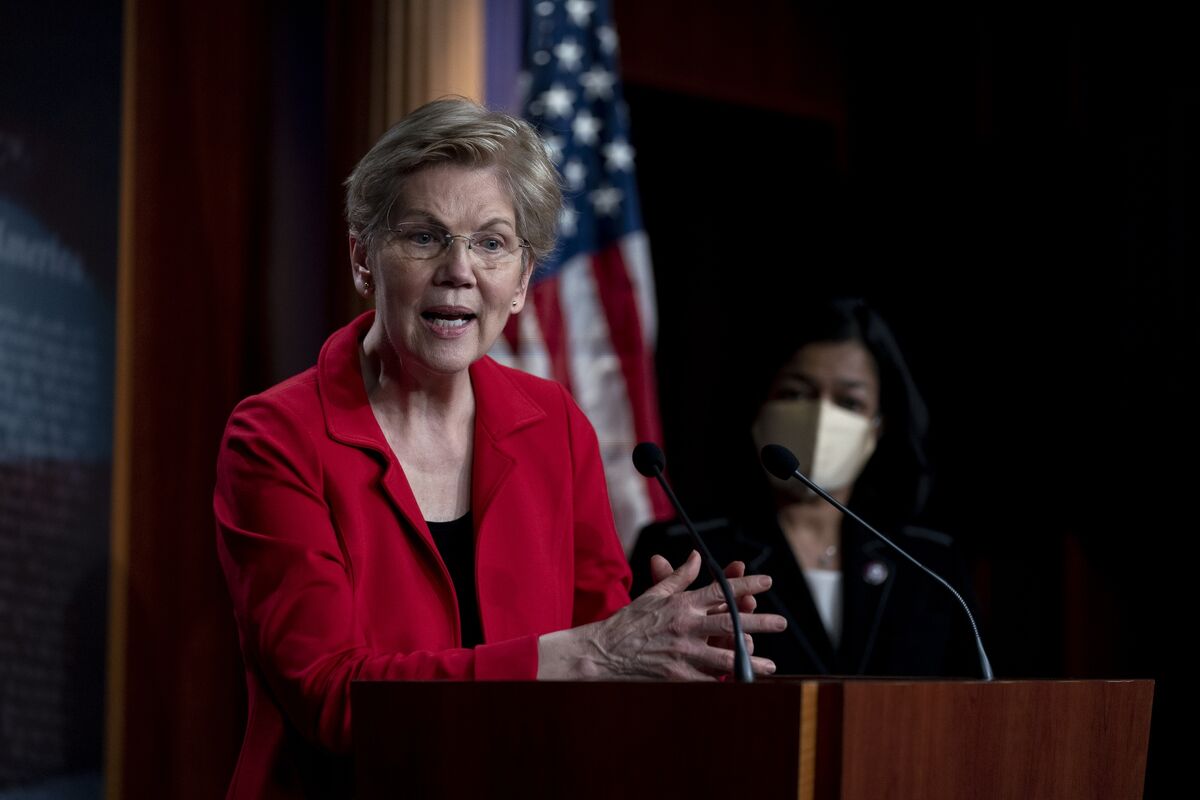 Senator Elizabeth Warren is calling for more transparency and oversight in the financial system after the forced selloff of holdings linked to Bill Hwangs private investment firm.

Archegos Capital Management after banks forced it to sell billions of dollars in investments accumulated through highly leveraged bets has roiled global markets. Calls for increased oversight have come about due to Archegos never having disclosed its positions in the publicly-traded companies.

Archegos meltdown had all the makings of a dangerous situation — largely unregulated hedge fund, opaque derivatives, trading in private dark pools, high leverage, and a trader who wriggled out of the SECs enforcement, Warren said in an email. Regulators need to rely on more than luck to fend off risks to the financial system: we need transparency and strong oversight to ensure that the next hedge fund blowup doesnt take the economy down with it.

The Securities and Exchange Commission

held meetings with banks on Monday to discuss what led to the forced sale. Archegoss prime brokers included

Warren, a Massachusetts Democrat and member of the Senate Banking Committee, is a proponent for increased regulation and oversight of banks. She

Gamestop Corp. and other stocks caused a hedge-fund short squeeze. A woman crashed her car into a freezing river....

A FedEx Express driver is being hailed a hero by police after he jumped into freezing water to save a woman who had crashed her car.
Read more

DOJ seeks dismissal of case by ACLU, BLM against...

The reforms, which would have increased taxes on low earners, have now been shelved.
Read more

The prime minister still warns of "bumps on the road" ahead as the IMF predicts 7% growth for the UK economy.
Read more

New Mexico Gov. Michelle Lujan Grisham is set to sign legislation that will legalize recreational marijuana use and sales in the state
Read more

Wife fears for American snatched from Moscow and taken...

Ziankovich, a lawyer with U.S. citizenship, is a long-time opponent of Alexander Lukashenko, the authoritarian leader of his native Belarus.
Read more

Watch the dramatic end to the first race in the women's omnium as Great Britain's Laura Kenny is involved in a big crash at the Tokyo Olympics.
Read more

Where the Republican party stands after Trump, according to...

Cynthia Lummis may be new to the Senate, but this isn't her first rodeo in Congress.
Read more

No Time to Die’s huge debut shakes and stirs...

No Time to Die has seemingly jumpstarted the theatrical box office after a superb opening weekend performance.
Read more

She's concerned the public may increasingly see the court as partisan.
Read more

Shona Stevens, 31, was attacked as she returned from the shops in Irvine almost 27 years ago.
Read more

Authorities are investigating after two passenger trains collided in the province of Sohag.
Read more

A bipartisan group of lawmakers is struggling to resolve a disagreement on public transit funding. Sen. Warner believes the bill could be finalized on Monday.
Read more

Former President Trump over the weekend used a speech at a wedding at his Mar-a-Lago club in Florida to tear into President Biden and his handling of various issues during his first three months in office."I've bee...
Read more

For one thing he hasn’t messed up yet.
Read more

Britain should respect its post-Brexit commitments, especially on Northern Ireland and fishing, and the EU is entitled to take action if that should not be the case, said French European Affairs Minister Clement Beaune, who added he was "very worried" by Brit…
Read more

Impossible Foods won a court ruling that allows it to continue using a key additive in its popular meat substitute, over the safety objections of a food-safety group.
Read more

OnlyFans might be trying to comply with specific terms, but what happens to the people dependent on the site?
Read more

In the past, Carlson has called the COVID-19 vaccine "a massive achievement" that "all Americans can be proud of."
Read more

Toyota's EVP of sales Bob Carter says the all-new Tundra will have technology that "will blow you away" when it goes on sale later this year. The Full-size truck will be revealed in September.
Read more

China cannot accept the World Health Organization's plan for the second phase of a study into the origins of COVID-19, a Chinese health official said Thursday.
Read more

Former county official Dave Muhlbauer is entering the race to unseat Sen. Chuck Grassley (R-Iowa), becoming the first Democrat to formally jump into the 2022 contest."I grew up a Democrat. My dad was a Democrat. My...
Read more

Someone just tried to add a security backdoor in...

Code changes were made in the name of senior PHP developers.
Read more

The remainder of the 2021 Indian Premier League season will take place in the United Arab Emirates in September and October.
Read more

‘Boy Next Door Killer’ to get death penalty or...

Struggling Blues seek to regain swagger, move up in...

The Blues have lost 12 of their last 14 games and are running out of time to salvage their season and make the playoffs.
Read more

A woman who once publicly defended R. Kelly against allegations of abuse as one of his "girlfriends" continued testifying anonymously against the singer Tuesday, describing their volatile relationship and what it was like being one of his multiple live-in gir…
Read more

Security flaw could expose some user IP addresses, even if you're using a VPN.
Read more

Senators closing in on Capitol security deal after Jan....

Without a deal, the U.S. Capitol Police will have trouble paying salaries starting next month and the National Guard will have to cut training.
Read more

A public transit bus struck by a vehicle that was being tracked by police crashed into an Oakland home. Most involved were uninjured.
Read more

According to the Brennan Center, at least 18 states have enacted 30 laws restricting access to the vote so far this year. On August 28, the anniversary of the 1963 March on Washington, where Martin Luther King Jr. gave his famous "I Have a Dream" speech, civi…
Read more

Keeping the majority of Bureau of Land Management (BLM) sites open during the coronavirus pandemic in 2020 resulted in "harmful consequences" including vandalism and damages to restrooms, according to ...
Read more

Xabi Alonso has had an offer to take over as Borussia Monchengladbach's new manager, but a decision has not yet been made, says Spanish football expert Guillem Balague.
Read more

Toxic leak from Angola diamond mine kills 12 in...

The leak turned a tributary of the River Congo red and also killed many fish, a minister says.
Read more

"We have an historic opportunity to make the most significant expansion of Medicare since it was signed into law."
Read more

Several Black police officers say they faced racism by colleagues during their time at the University of Washington, ...
Read more

The Department of Homeland Security (DHS) announced on Monday that four families who were separated at the U.S.-Mexico border during the Trump administration will be reunited this week in the U.S....
Read more

Why is there a CO2 shortage and how will...

The food and drink industry is warning of supermarket shortages because of a lack of CO2.
Read more

Authorities in Pakistan briefly blocked access to social media platforms on Friday amid ongoing anti-French protests across the country spurred by depictions published of the Prophet Muhammad. Khurram Mehran, a spokesman for Pakistan’s media...
Read more

One third of UK farmers could be depressed –...

Regulation, the pandemic and extreme weather are among factors causing high stress to farmers.
Read more

Zettle 2 provides a mobile app and card reading system allowing you to receive payments from anyone.
Read more

Test and Trace boss Dido Harding to step down...

Boris Johnson promised a "world-beating" system, but it was heavily criticised during her tenure.
Read more

More than 40 percent of Americans say they would like to see President Biden's two infrastructure spending proposals passed in their current form, even if they do not receive bipartisan support, according to a new p...
Read more

A Texas woman who confessed to smothering her two young daughters to death has been charged with capital murder, authorities said.
Read more

U.S. Racial Vaccine Gaps Are Bigger Than We Thought

The Best Multi-Tools for Any Task

Swiss Army knife or Leatherman? Choosing one of these tiny gadgets can be confusing. These are our favorites.
Read more

Ex-Marine sharpshooter accused of killing 4 was searching for...

A patch at the 11th hour helped Linux avoid “yet another hardware trainwreck” in the latest development release of the upcoming kernel.
Read more

A shocking court ruling has deemed that a Ring doorbell could be considered an invasion of others' privacy.
Read more

Magic fall to Nuggets on the road as Nikola...

The Orlando Magic fall to the Denver Nuggets on the road as Nikola Jokic records his 12th triple-double of the season.
Read more

Obama: “Definitely a deal to be done” with GOP...

Security cameras in a pet store in St. Petersburg, Florida, caught a man as he stole a baby python from its cage. Upon seeing the attempted theft on the cameras, store employees rushed to capture the man.
Read more

Here's what you missed from Day 9 of the 2020 Summer Olympics in Tokyo.
Read more