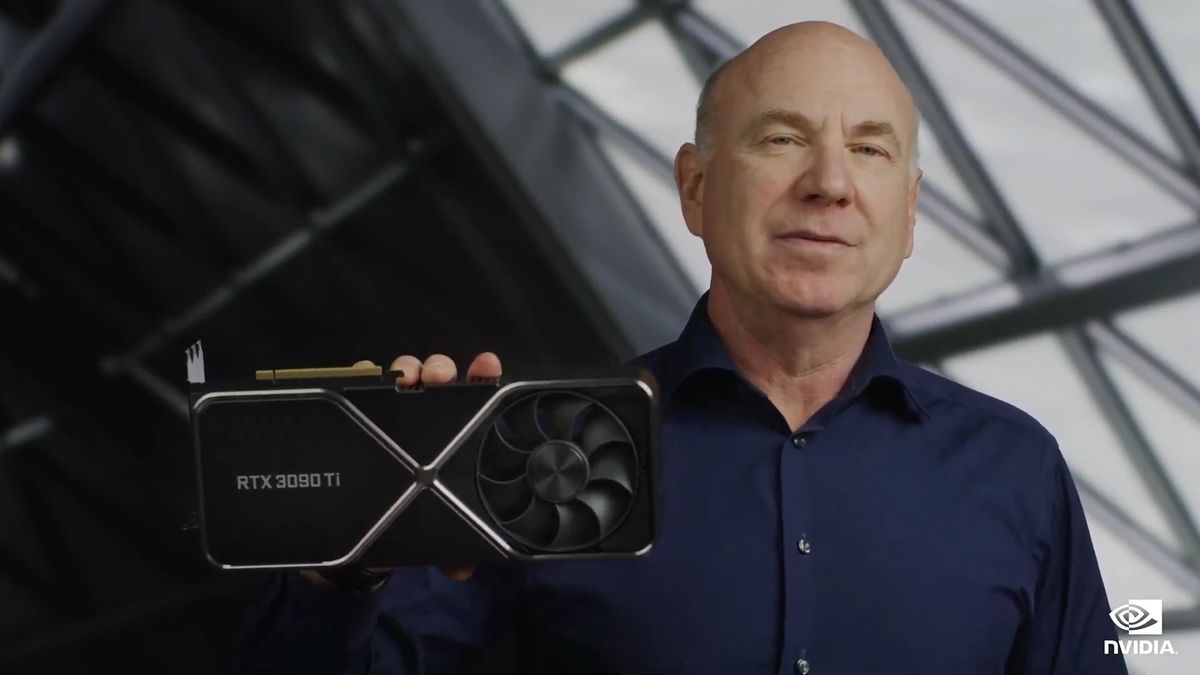 Nvidia’s RTX 3090 Ti leaks are coming thick and fast now, with the latest from the grapevine giving us a purported price, and also the contention that stock of this GPU should be plentiful.

VideoCardz has tapped its sources and reports that the price tag of the RTX 3090 Ti will be pitched at $1,999 in the US (around £1,500, AU$2,700) for Nvidia’s own Founders Edition. However, third-party versions from card makers will likely retail for more (perhaps quite a hefty chunk more, based on other spillage of pre-release pricing we’ve heard).

What’s really interesting is that the report asserts that some major US retailers will have ‘thousands’ of RTX 3090 Ti graphics cards as launch stock right from the get-go.

VideoCardz also leaks performance figures for the new Ti version of Nvidia’s Ampere flagship, and the card is expected to be around 7% faster than the vanilla RTX 3090 (based on 3DMark benchmarks), which is roughly in line with previous rumors. Another recent nugget suggested up to a 10% performance boost (albeit that was at 4K resolution). In short, expect some gains compared to the base 3090, but nothing too extravagant.

That price sounds about right for the Founders Edition. There’s a fresh rumor about the 3090 Ti keeping the same price tag (MSRP) as the 3090 – and the latter dropping down its recommended price further – but we’re finding that one difficult to believe.

Sadly, we’re just not expecting any remotely tempting pricing here, mainly because the RTX 3090 Ti is only really going to appeal to PC enthusiasts with silly amounts of cash to hand. After all, we’re now that close to the launch of next-gen cards and the RTX 4090, it seems silly not to wait for those Lovelace GPUs. Not unless you absolutely must own the bragging rights to having the fastest card going in your PC right away when the 3090 Ti hits the market. And those sorts of people aren’t going to be thinking remotely about graphics card budget, so there’s no need for Nvidia to, either; or that’s our argument.

What’s really interesting here is the part of the rumor around there being ‘thousands’ of cards ready to go from the off, which seems unlikely to say the least. The 3090 Ti isn’t going to sell in large numbers purely because it is very much a niche card due to that steep price tag (and the proximity to the next-gen Lovelace launch only reinforces that). So why would there be tons of them floating around?

Obviously we have to take all of this speculation from the rumor mill with large pinches of salt, but what this does give us is the suggestion that stock of the RTX 3090 Ti will be as plentiful as it needs to be, and anyone looking to grab one of these cards obviously won’t have a problem doing so, right out of the gate.

More broadly, we’re seeing plenty of signs that the GPU stock picture is improving rapidly, and that pricing is set to come down across all models. Fingers crossed that this continues going forward.

‘Always More To The Story’: Siesta Key Is Returning...

This is the abortion bill Republicans want if they...

How to Insure the Most Expensive Car in the...

Bilingual R&B Star Omar Apollo Welcomes You Into His...

The secret stretch of coastal France that’s nicer than...

Facebook reports losing users for the first time in...

Moderna says new booster for fall could be ‘turning...

China criticizes US as tensions rise in South Pacific

Boris Johnson party apology reaction: ‘They should stick to...

San Francisco reporter on the rising rate of unsolved...

S As credit demand grows in India, banks may...

Russia Having ‘More and More Difficulties Conducting War in...

McCarthy picks his path on Cheney: Try to boot...

Championship: Four from 10? The race for the play-offs...

Dems face facts: They need a November turnaround to...

Judge rules against school board in probe of sex...