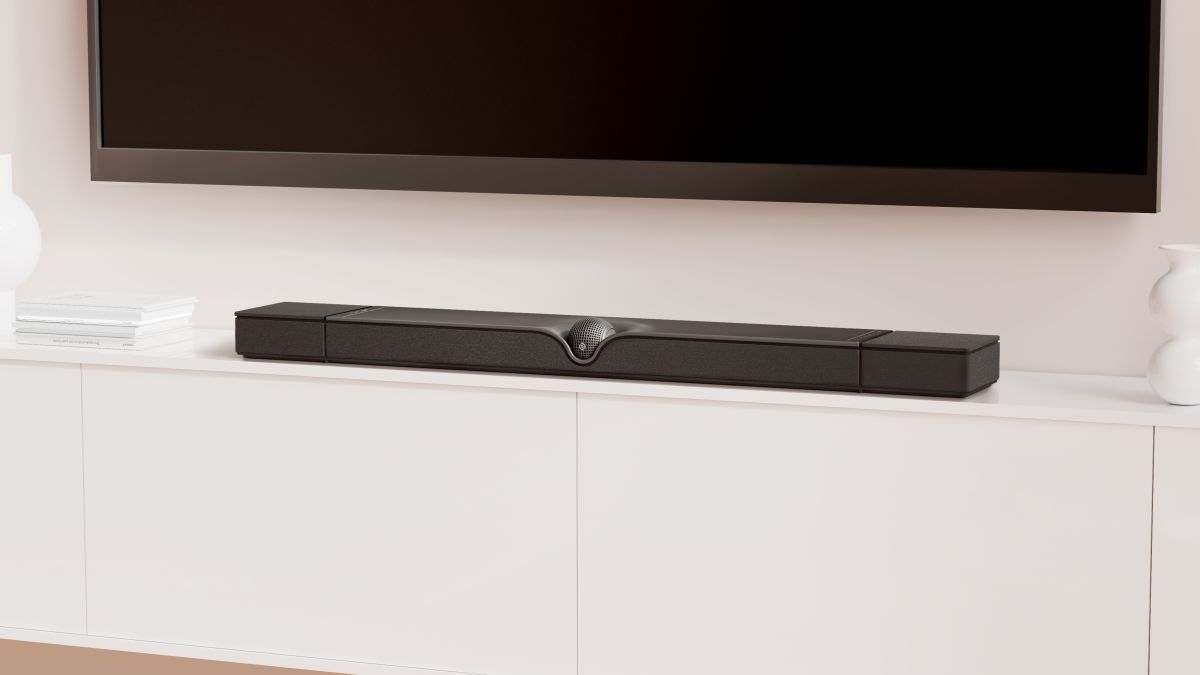 French audio brand Devialet has announced its first-ever soundbar – and with Dolby Atmos and room calibration, it could make a convincing alternative to rivals like the Sonos Arc.

While most soundbars look fairly similar to one another, the Devialet Dione employs a striking design that sets it apart from the competition and takes inspiration from the company’s previous space age-style wireless speakers.

In the middle of the new Dolby Atmos soundbar is an orb-shaped center channel, that’s designed to maintain perfect front-facing calibration, no matter how you position the Dione (fans of the Devialet Phantom I speaker will recognize the spherical design). Whether you place the soundbar underneath your TV, or mount it flush against your wall, the orb points towards you to deliver sound straight to your ears.

As well as mechanically adapting the sound, the orb in the center of the soundbar contains a gyroscopic sensor that detects the position of the soundbar and adjusts the audio signal accordingly.

As with the Sonos Arc, the Devialet Dione can be calibrated to your room for a personalized sound, using the company’s app to scan your surroundings.

This should make the soundbar’s Dolby Atmos audio feel particularly convincing, as it will know which surfaces it can bounce sound off of to create an immersive listening experience.

Devialet says that, even when the soundbar is mounted to the wall, its upfiring drivers will still beam sound up to your ceiling.

If you’re not watching Atmos content, you’ll still be able to achieve a semblance of spatial audio, thanks to the company’s proprietary SPACE technology, which upmixes sources into 5.1.2-channel sound.

Atmos aside, the sound of the Devialet Dione should be pretty powerful; it contains eight subwoofers and nine aluminum full-range speakers. Those subwoofers utilize Devialet’s push-push technology to deliver what the company describes as “powerful, deep bass whatever the volume” without the need for a separate subwoofer.

There are four different listening modes to choose from. The Movie and Spatial modes convert stereo content into multichannel audio thanks to that SPACE algorithm we mentioned, while Voice Mode is designed to make podcasts and news programs sound clearer. Finally, Music mode is there to “faithfully reproduce a stereo setup”, and disables all the spatialization effects for a naturalistic sound.

As for connectivity? You get HDMI 2.1 eARC, optical, AirPlay 2, Spotify Connect, UPnP, and Bluetooth 5, so you should be covered whether you want a plug-and-play setup or easy wireless connections with your other devices.

All that combined with a sleek design that stands out from the competition makes the Devialet Dione an intriguing alternative to the best soundbars available today. However, it’s hefty price tag may be off-putting to budget-conscious cinephiles.

Available to preorder now and launching officially in April, the Devialet Dione will cost $2,400 / £1,990, and while Australian pricing is yet to be confirmed, that works out at about AU$3,200.

Devialet has never been a bargain basement brand, with its wireless speakers costing as much as $3,200 / £2,790 / AU$5,490. Still, when you can get models like the Sonos Arc and Samsung HW-Q950A for much less, that price tag will only appeal to those that already love the Devialet aesthetic and sound. Czechs in talks to get German tanks as they...

Preparations underway for “The Race of the Gentleman” vintage...

Planet Fitness Borrows in a Big Bet on Life...

America Revisits the Assault on Its Democracy: Weekend Reads

A Masterpiece of German Realism

Derby County: How one of England’s historic clubs was...

Rain finally in forecast for Texas areas scorched by...

Volvo will debut its ‘self-driving’ Ride Pilot feature in...

How a budget battle sowed chaos on the cusp...

Kids want to put Montana on trial for unhealthy...

Cause of major Aberdeen recycling plant fire remains a...

Protecting Florida From the Voters

OSOM’s OV1 looks to pick up where the Essential...

LA mayor’s race: Bass and Caruso to face off...

Debris From China Space Rocket Long March 5B Is...

Germany looks to bounce back from shock defeat and...

Iowa announces upcoming end to COVID-19 as a public...

The Pixel Tablet will attach to a speaker base...

Cost of living: How can I save money on...