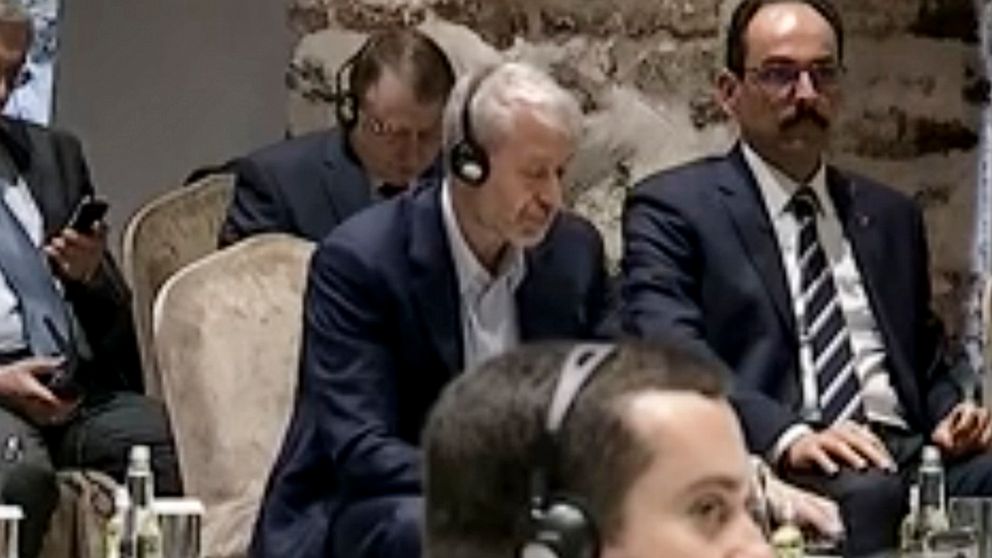 The 55-year-old billionaire has swapped the skybox seat he once proudly occupied at his beloved Chelsea soccer club in Britain for a spot on the sidelines of negotiations between Kyiv and Moscow aimed at ending Russia’s bloody war in Ukraine.

The silver-haired oil-and-aluminum tycoon stood in the background Tuesday as Turkish President Recep Tayyip Erdogan entered a hall packed with negotiators in a government building adjacent to the 19th century Ottoman palace, Dolmabahce, on the shores of the Bosporus in Istanbul.

It was left to Kremlin spokesman Dmitry Peskov to try to explain Abramovich’s role.

Abramovich has been ensuring certain contacts between the Russian and Ukrainian sides, Peskov said, but is not an official member of the delegation. He said both sides have approved his role.

Ukraine’s ambassador to Britain, Vadym Prystaiko, said, however: I have no idea what Mr. Abramovich is claiming or doing. He is not a part of the negotiation team.

The talks appeared to yield a cautious step toward scaling back Moscow’s offensive when Deputy Defense Minister Alexander Fomin said Russia would fundamentally cut back operations near Ukraines capital of Kyiv and a northern city in a move to build trust.

Turkish Foreign Minister Mevlut Cavusoglu said the two sides made the most meaningful progress since the start of the negotiations at their meeting in Istanbul.

Just being in the room in Istanbul marks a remarkable turnaround for Abramovich, who has been sanctioned by the U.K. government and European Union, although he is conspicuous by his absence from a list of oligarchs sanctioned by the United States.

Abramovich appears to have established contacts high in Ukrainian government circles, to go alongside his long-standing links to the Kremlin.

President Volodymyr Zelenskyy said Sunday that Kyiv had received signals with offers of help from Abramovich and others, along with requests to be spared from sanctions.

Some of them were ready to help restore Ukraine after the war, he said, before citing their offers: We are ready to give money, we are ready to relocate business to Ukraine. We are now living in England or in Switzerland, we would like to do it. Is it possible not to be on the sanctions list?

Abramovich’s presence in Istanbul was all the more surprising as it came a day after reports that he may have been poisoned at an earlier round of talks.

The British Foreign Office said in a statement Tuesday that the allegations are very concerning. The Organization for the Prohibition of Chemical Weapons has not commented on the report.

Ukrainian Foreign Minister Dmytro Kuleba also voiced his concern, telling the 1+1 TV channel: I advise anyone going to the negotiations with the Russian Federation not to eat or drink anything and preferably avoid touching any surfaces.

U.S. Secretary of State Antony Blinken said he had no details on the poisoning reports, but that the reporting to that effect raises concerns because Russia has a real track record, a reference to past poisoning cases blamed on Moscow.

Peskov dismissed the reports as part of the information war. These reports obviously do not correspond to reality.

Abramovich’s press representative had no comment on the reported poisoning or on his involvement in Russia-Ukraine talks.

In announcing sanctions against Abramovich, Prime Minister Boris Johnson’s government called him a pro-Kremlin oligarch with an estimated fortune of more than 9 billion pounds ($12 billion) who should be punished for his association with Putin. Abramovich also was linked with destabilizing and threatening Ukraine.

It was a further fall from grace for Abramovich, whose $2 billion investment in Chelsea over 19 years transformed the English Premier League team into a force in European football and earned it the nicknames Chelski and the Roman Empire.”

He is being forced to sell the club after his assets were frozen as part of a crackdown on oligarchs following Russias Feb. 24 invasion. The Premier League also disqualified him from running the west London club and being a director. Abramovich has said proceeds of the clubs sale, which is subject to government approval, will go to a foundation he started for victims of the war in Ukraine.

He has been banned largely absent from Britain since 2018, when he withdrew an application to renew his visa amid a clampdown on rich Russians after a former Russian spy and his daughter were poisoned in the English city of Salisbury. Britain blamed Russia for the pairs exposure to a nerve agent, an allegation Moscow denied.

He took Israeli citizenship in 2018, although it is not clear how much time he spends in the country. He has been rumored to be in Israel several times since the war erupted, according to the movements of planes purportedly belonging to him. He was seen about two weeks ago at Ben-Gurion airport.

The Solaris, a yacht belonging Abramovich, was seen docked in Turkeys Aegean Sea resort of Bodrum earlier this month, Turkish media reports said. NATO-member Turkey has not joined other members of the alliance in sanctions on Russia.

This retro-inspired Casio adventure watch is made from beans…...

Florida Girl Attacked by 9ft Shark Was Saved by...

Queen’s Platinum Jubilee: ‘As a refugee it made me...

Military veterans commissioner for Wales to be appointed this...

We Need a New Word for Expensive: The Readout...

Not see hide nor hair

Millions of women and children have fled the war...

Medicare limits coverage of controversial Alzheimer’s drug to those...

WHO: COVID cases and deaths continue to fall globally

‘Where the Crawdads Sing’ Ending: Did Kya Kill Chase?

Stephen Fry: Actor and writer to become next MCC...

Hundreds of books found discarded in dumpster outside Lake...

Pret sales jump as it focuses on towns and...

A look at the global impact of the assassination...

Key gas pipeline from Russia to Europe restarts after...

Is Keir Starmer right that wages have been ‘stuck...

Majority of Americans Believe Government Is Corrupt and Rigged...

Amazon’s latest gadget for kids is finally available to everyone in the...