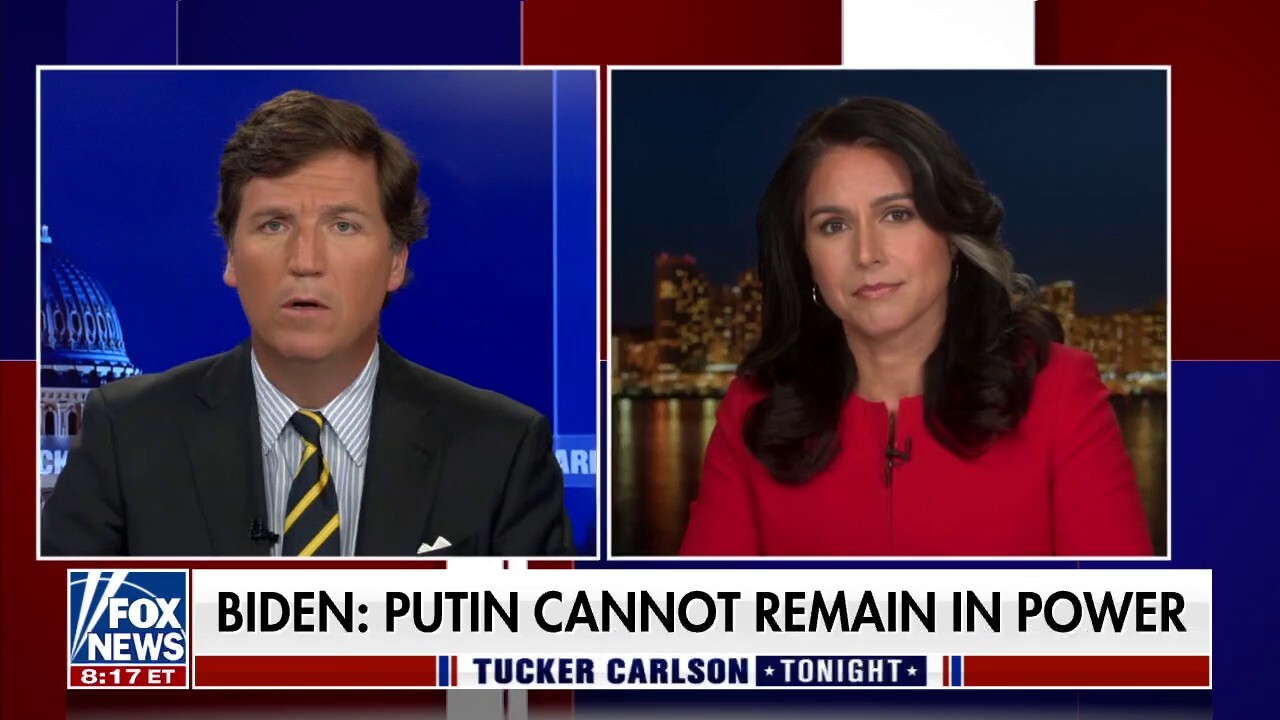 , a 2020 presidential candidate and U.S. military reservist, pointed to Biden’s speech in Warsaw on Saturday where he appeared to call for a new regime in Russia, declaring at the time that President Vladimir Putin “cannot remain in power.”

US President Joe Biden delivers a speech about the Russian war in Ukraine at the Royal Castle in Warsaw, Poland on March 26, 2022.

The White House issued an immediate clarification on the president’s comment, prompting the media to chalk it up to one of several “gaffes” he made while traveling abroad. But Gabbard believes the president was verbalizing what had been his primary objective all along.

“It was not a gaffe at all,” she told Tucker Carlson. “President Biden just said out loud what the aims and objectives of his administrations policies are, which is regime change in Russia, to get Putin out of power. They are doing so through using the primary weapons of economic warfare,” she said.

“They are doing so by waging this modern-day siege against Russia, isolating, containing, destroying their economy, starving the Russian people in the hope that the Russian people or the military will rise up and revolt and overthrow their government, and get rid of Putin.”

Gabbard said she believes Biden is “lying” about his true motives to avoid the political blowback that would result from initiating a “regime change war.”

“The reason why they are lying about this to the American people, is, they know we are sick and tired of our country waging regime change wars. We remember how costly and devastating these wars in Iraq, Libya, Syria have been. And we rejected them wholeheartedly,” she said. “So if they were to come out and tell the truth, their polls would tank even more than they already are, and their politics would suffer.”

“The American people are smart enough to know that a regime change war against a nuclear-armed Russia is very different from any other thats been waged before,” she continued, “and will result in disastrous consequences that go beyond anything we could even imagine.” McConnell says Biden speech was ‘incoherent, incorrect and beneath...

Australia Briefing: Why It’s the Best Time to Visit...

How companies can manage the risks in handling alternative...

Our American Village: An East Hollywood attorney and her...

Depression rise at Christmas linked to stress over Covid

Google Fires Software Engineer Who Says He Talked to...

Ukraine, Biden And The Future Of Crypto

The speedy Fujifilm X-H2S is like a mini Nikon...

Xiaomi 12T imminent, according to tipster; should the pricier...

Josh Shapiro Puts His Faith at the Center of...

Black Republican Says He Needs AR-15 to Fight Off...

Family tribute to Fife man who died after dive...

SPAR19 Is Most-Tracked Plane on FlightRadar24: Is Nancy Pelosi...

Jan. 6 committee has outtakes of Trump’s message to...

Forbes op-ed suggests Oscars proved 'respectability will not and has not saved...