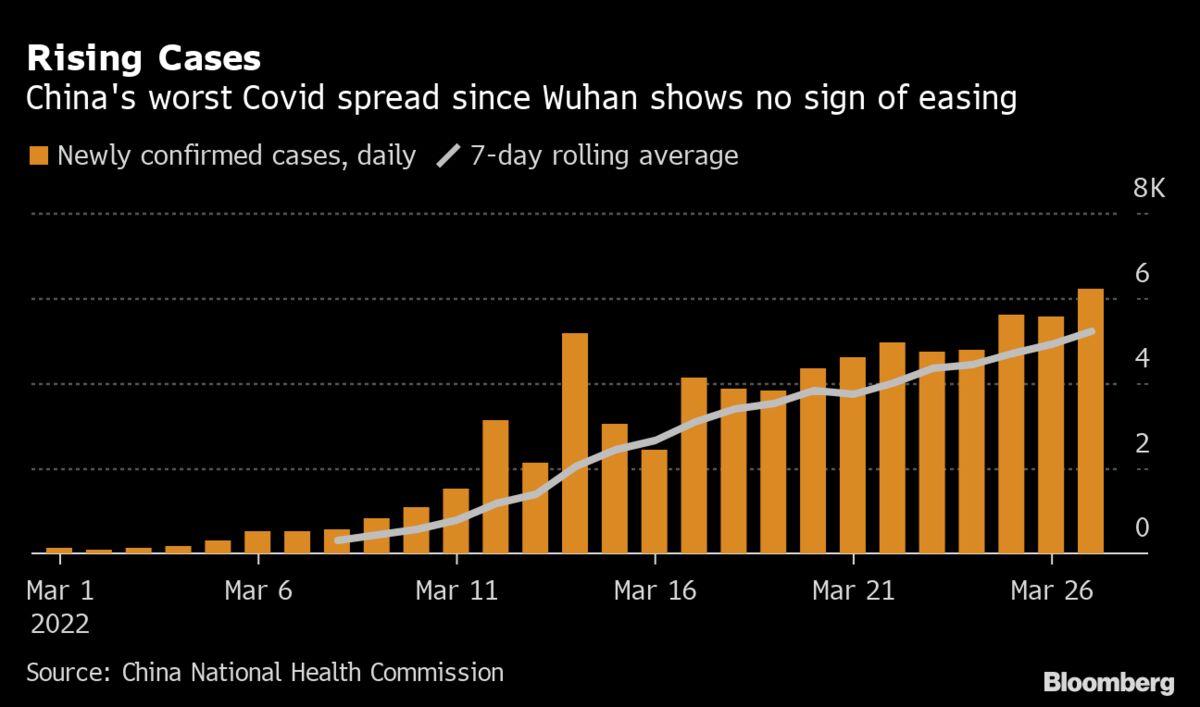 lockdown will likely deal a heavy blow to businesses reliant on consumer spending, though economists say the citys industrial sector can largely withstand the disruption, mitigating threats to the global supply chain.

The staggered eight-day lockdown in Shanghai — a city of 25 million people — and lingering effects from the measure may shave up to 0.4 percentage point from Chinas economic growth in the first and second quarter, compared to a year ago, according to estimates by Liu Peiqian, China economist at NatWest Group Plc.

The restrictions targeting half of the city at a time will bar the citys residents from leaving home, an attempt to curb Chinas worst Covid outbreak since Wuhan in early 2020. That will likely hurt employment in the services industry and weigh on small businesses the most.

Liu, whose forecast for gross domestic product growth in the first quarter is 4.7%, said the gradual recovery of the services and consumption sectors could take eight weeks.

As a major financial and trade hub, Shanghai contributes 3.8% to the countrys GDP. Its also the second-richest city, trailing only Beijing, according to the latest available figures from the National Bureau of Statistics.

Economists have been downgrading Chinas growth forecasts for the year as outbreaks linked to the highly infectious omicron variant continue to spread. High frequency indicators and company statements released so far suggest a likely temporary hit to factory production as the government tries to minimize the fallout. The damage to consumer sentiment may be more lasting though, putting the governments full-year growth target of about 5.5% under threat.

Even before the Shanghai lockdown was announced, Nomura Holdings Inc. warned Chinas economy

faces its worst downward pressure since the pandemic began. The banks economists, led by Lu Ting, wrote in a note that markets should be concerned about a slide in growth in the second quarter as they downgraded quarterly forecasts for the rest of the year.

Factory activity likely took a knock in March, with the official manufacturing Purchasing Managers Index, which is scheduled for release on Thursday, probably slipping into

contraction after the Shenzhen lockdown, according to Bloomberg Economics.

China’s latest Covid outbreak a threat to its economic outlook

On supply chains, China can likely limit the damage as long as the lockdown doesnt last longer than three weeks, according to Raymond Yeung, chief economist for Greater China at Australia & New Zealand Banking Group Ltd.

He said a so-called

closed loop system tested in Shenzhen — where factory workers are living in dorms, working in a bubble separate from the general public — has lessened the impact on the economy. The southern technology hub of Shenzhen resumed normal operations Sunday, about two weeks after the government placed its 17.5 million residents under

Similar to Shenzhen, Shanghai is the economic powerhouse of the country, Yeung said. The scale is obviously larger but the action is swift, hoping to minimize the economic impact as soon as possible.

Shanghai port, the worlds largest, is still operating around the clock, according to local media reports. Chinese chipmaker

normal production at its facility in the city, and is complying with Covid prevention measures.

suspended production Monday, with operations to be halted for four days.

China is the last holdout in pursuing

Covid Zero, a strategy that prioritizes control and elimination of the virus through stringent restrictions like lockdowns and mass testing. Many experts still think Beijing wont ease curbs and open up this year, though some have said the countrys virus strategy could continue to be tweaked, allowing for some flexibility.

The government could boost confidence should it detail a road map for eventually reopening to the rest of the world, according to Zhang Zhiwei, chief economist at Pinpoint Asset Management Ltd.

The main uncertainty facing Chinas Covid fight is that the exit strategy is not clear going forward, he said. The zero tolerance policy is likely to be unsustainable in long term in terms of economic costs and the burden on normal peoples daily lives.

Larry Hu, an economist at Macquarie Capital Ltd., said policy makers will have no choice but to step up stimulus in the coming months in order to meet the GDP growth target this year.

We maintain our annual GDP forecast of 5%, as more policy easing would come through, he said, predicting a benchmark interest rate cut in April, as well as more support for infrastructure and property sectors.

With assistance by John Liu, Yujing Liu, and Fran Wang

(Updates with latest on the Tesla restrictions and comments from economists.) At least 59 dead in crowd crush during Halloween...

In the War on Thanksgiving, America May Finally Be...

Russians pounding Ukraine, but Mariupol’s no Grozny — yet

How to Upload Custom Emoji in Slack

Liz Truss: An heir to Thatcher intent on shaking...

Wrexham serve up Hollywood drama in the FA Cup

Zelenskyy is rallying ‘the world,’ Biden is leading from...

The Lectric XP Lite is a folding e-bike with...

Tax refunds could be a lot less this year

White should have been withdrawn from Ireland game

Gigabyte and Maingear team up to offer hassle-free PC...

I never enjoyed taking drugs – it was self...