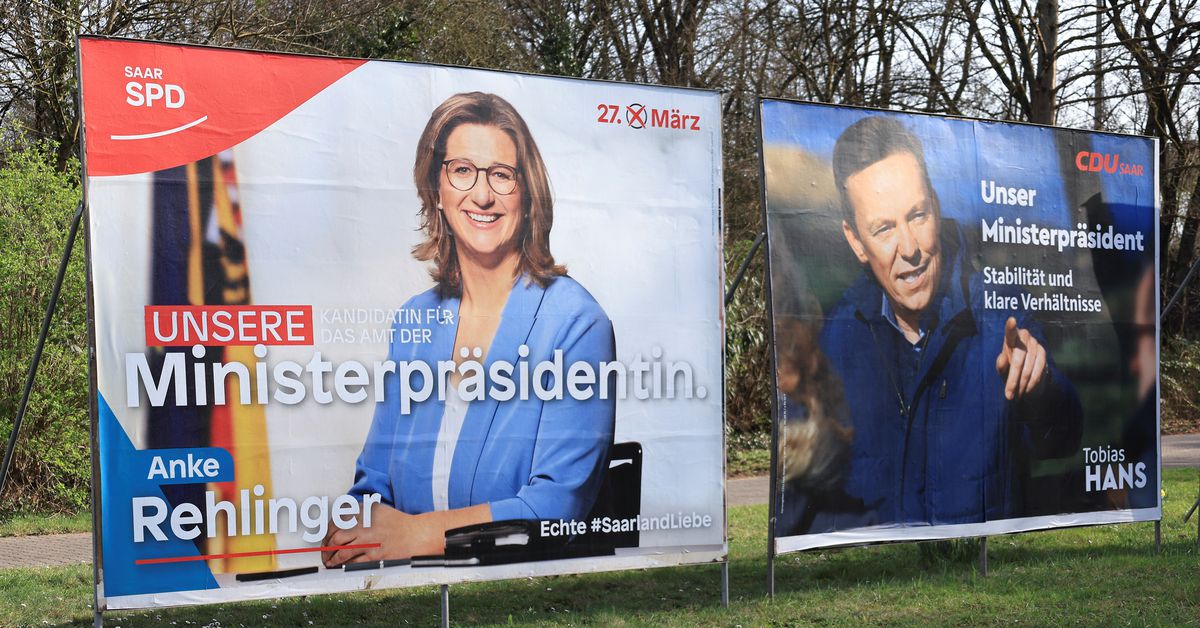 BERLIN, March 27 (Reuters) – Germans head to the polls in the small western state of Saarland on Sunday in the first of four regional votes this year which could enable Social Democrat Chancellor Olaf Scholz to consolidate his grip on power.

The first regional vote since the federal election last September which the Social Democrats (SPD) unexpectedly won – beating the conservatives for the first time in 16 years – looks set to provide the party another boost.

A poll published on Thursday by ZDF Politbarometer put the SPD at 41% of the vote compared with 28% for the conservative Christian Democrats (CDU). The two parties have ruled Saarland in a conservative-led so-called “grand coalition” since 2012.

State elections in Germany are important bellwethers for the public mood and to determine the distribution of votes in the Bundesrat upper house of parliament.

While the ruling coalition of SPD, environmentalist Greens and liberal Free Democrats (FDP) has a solid majority in the Bundestag lower house, conservative-led or co-ruled states have 51 of 69 votes in the Bundesrat.

Three of the four states going to the polls this year are CDU-led. If the CDU were to lose those votes, that could make it easier for the government to pass legislation.

In the case of Saarland however, political analysts point out it does not have much weight in the Bundesrat given it has only around a million inhabitants.

Moreover voters there are especially motivated by local issues like concerns about high unemployment and the popularity of regional SPD leader Anke Rehlinger.

The conservatives are actually leading in polls nationwide, at 27% versus 23% for the SPD, said Manfred Guellner, head of pollster Forsa.

A more critical signpost will be the elections on May 15 in Germany’s most populous state North Rhine-Westphalia, said Naz Masraff at Eurasia Group.

“A possible change of government from the CDU to the SPD would be critical for Scholz to further consolidate power in his party, and allow larger policy space for the government,” said Masraff.

Currently the CDU premiers of North Rhine-Westphalia and Schleswig-Holstein, which is set to hold a state election on May 8, are leading their SPD rivals in polls. Lower Saxony, where the SPD is leading a grand coalition, also goes to the ballot on Oct. 9. CDC on omicron cases, hospitalizations: ‘Milder does not mean...

How Disney Cruise Line Housekeepers Make You Feel at...

Americans are eating into pandemic savings to cope with...

The Lasting Impact of The Bogle Effect (Podcast)

‘His life was threatened.’ But Pence isn’t talking about...

Al-Zawahri’s path went from Cairo slum to top of...

How to Help Victims of the War in Ukraine

Why Ghislaine Maxwell May Hold Back if She Speaks...

Thousands of homes without power as Storm Corrie looms

Greg Gutfeld: The media is distancing itself from Joe...

Stranger Things 5 will have shorter episodes – and...

Jill Biden tests negative for Covid-19 and will return...

Russia-Ukraine crisis: Why Brussels fears Europe is ‘closest to...

Uttar Pradesh elections: ‘We Muslims are treated like the...

DOW plunges amid fears of a recession

Biden to propose minimum tax on households worth over $100 million