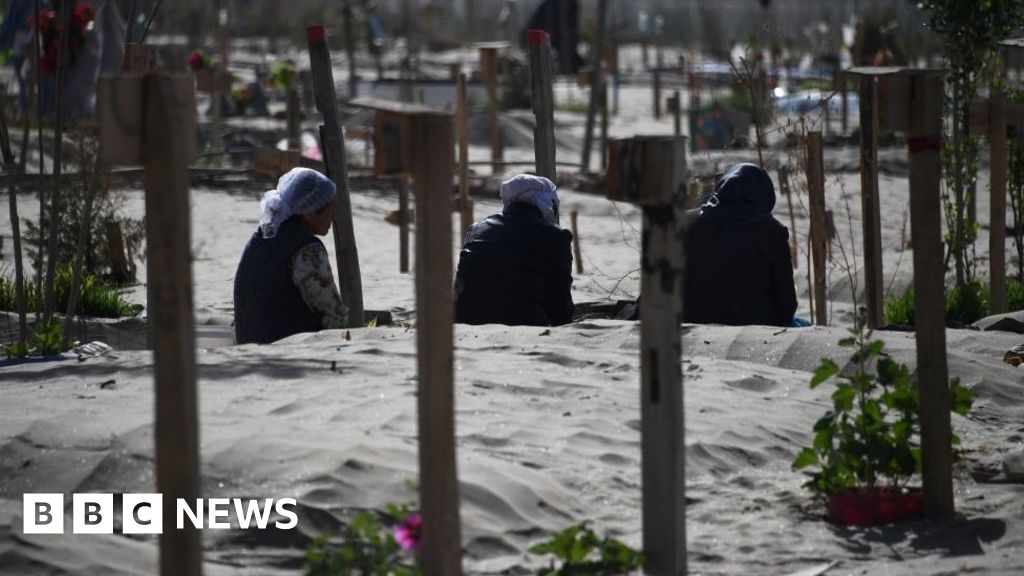 China has imposed sanctions on nine UK citizens – including five MPs – for spreading what it called “lies and disinformation” about the country.

It comes in retaliation for measures taken by the UK government on Monday over human rights abuses against the Uighur Muslim minority group.

Sir Iain Duncan Smith is among the MPs targeted by China, along with two peers, a lawyer and an academic.

He said he would wear the sanctions “as a badge of honour”.

The response by China follows similar sanctions imposed on the European Union, which was part of the co-ordinated action along with the UK, the US and Canada on Monday.

China has detained Uighurs at camps in the north-west region of Xinjiang, where allegations of torture, forced labour and sexual abuse have emerged.

It has denied the allegations of abuse, claiming the camps are “re-education” facilities used to combat terrorism.

They will all be banned from entering China, Hong Kong and Macao, their property in China will be frozen and Chinese citizens and institutions will be prohibited from doing business with them.

Former Conservative leader Sir Iain said: “It is our duty to call out the Chinese governments human rights abuses in Hong Kong and their genocide of the Uighur people.

“Those of us who live free lives under the rule of law must speak for those who have no voice. If that brings the anger of China down upon me the I shall wear that as a badge of honour.”

Academic Ms Smith Finley tweeted: “I have no regrets for speaking out, and I will not be silenced.”

He added that the Chinese Foreign Ministry had summoned the British Ambassador to China to “lodge solemn representations, expressing firm opposition and strong condemnation”.

This retaliation by the Chinese government was not unexpected.

From the moment the UK imposed its first ever sanctions on Chinese officials earlier in the week, a response from Beijing was inevitable.

But that does not mean the tit-for-tat exchange of sanctions is not unimportant. It will ensure that the UK’s already poor relationship with China will deteriorate further.

And that matters because the government is trying to strike a balance in its relations with Beijing.

In its recent foreign policy review, the UK described China as a “systemic competitor” and “the biggest state-based threat to the UK’s economic security”.

But it also spoke of pursuing “a positive trade and investment relationship” and cooperating with China on climate change and biodiversity. All that just became a little harder still.

Four groups have also been sanctioned – the China Research Group, which is led by Mr Tugendhat and Mr O’Brien, the Conservative Party Human Rights Commission, the Uighur Tribunal, and Essex Court Chambers.

An IPAC spokesman said: “The decision to sanction five of our British members is a flagrant assault on those Parliamentarians’ rights to conduct their duties.

“We will be making urgent representations to ministers and the House authorities to see that they’re protected from danger or harm as a result of the communist party’s bullying.”

After UK sanctions were announced on Monday, UK Foreign Secretary Dominic Raab called the abuse of Uighur Muslims in Xinjiang “one of the worst human rights crises of our time”.

More than a million Uighurs and other minorities are estimated to have been detained in camps in Xinjiang.

Xinjiang lies in the north-west of China and is the country’s biggest region. Like Tibet, it is autonomous, meaning – in theory – it has some powers of self-governance. But in practice, both face major restrictions by the central government.

Uighurs living in the region speak their own language, similar to Turkish, and see themselves as culturally and ethnically close to Central Asian nations.

The Chinese government has been accused of carrying out forced sterilisations on Uighur women and separating children from their families.

The country initially denied the existence of the camps, before defending them as a necessary measure against terrorism. It has denied allegations of human rights abuses. Britain urged the European Union on Tuesday to help find an urgent solution to trade difficulties with Northern Ireland before the end of this month, saying there was no case for the bloc to prevent the sale of chilled meat in the province.
Read more

The announcement of a tax rise to pay for social care leads all of the morning papers.
Read more

Potter gave emotional testimony in her own defense, saying she meant to grab her Taser instead of her gun.
Read more

Senate Republican leader Mitch McConnell on Friday warned President Joe Biden he should not expect cooperation on raising the debt ceiling again, a day after he voted with Democrats to overcome a procedural hurdle and make way for a temporary extension of the…
Read more

The Food and Drug Administration has granted approval to a drug called Aduhelm, developed by Biogen, for patients with Alzheimer's disease. The decision comes despite warnings from independent advisers that there isn't strong enough evidence to prove the trea…
Read more

NFL to require boosters for some coaches, staff, amid...

The NFL is requiring that some coaches and staffers receive a COVID-19 booster shot this month amid an uptick in coronavirus infections across the league.The league sent a memo to teams on Monday...
Read more

A tropical threat that could strengthen into tropical storm Claudette is taking aim on the Gulf Coast.
Read more

Weekend of water deaths ‘is worst in memory’

Six people died in accidents on Loch Lomond and on rivers in South Lanarkshire between Friday and Sunday.
Read more

Spotify’s podcast subscriptions tipped to launch next week to...

Apple just unveiled options for podcast creators to boost revenue, and now Spotify is about to do the same.
Read more

Could McCarthy win the gavel?

MCCARTHYS FIGHT AHEADRepublicans are feeling confident about their chance to to take back control of the House in the 2022 midterm elections. But...
Read more

The PS5 restock this week will likely start on Tuesday, April 6. Here's when and where to buy it at top stores in the US.
Read more

U.S. water officials are projecting the man-made lakes that store water used throughout the American West will fall to historically low levels and trigger an official shortage declaration for the first time
Read more

The new owners of WooHa say they plan to restart production at the Moray-based brewery soon.
Read more

Small businesses are scrambling to hire enough workers to meet surging demand.With consumers flocking back to their pre-pandemic routines quicker than some workers are willing and able to rejoin the workforce, businesses are boosting wages, offering...
Read more

Virgin Galactic Holdings Inc. shares soared as much as 36% in premarket trading after the company founded by British billionaire Richard Branson conducted a test flight to space for the first time in more than two years.
Read more

The Time to Buy Your Holiday Presents Is Now

Supply chain problems haven’t improved. If you want to gift something special, here's how to plan ahead.
Read more

Paul Rusesabagina, a former hotel manager who is the central character in the 2004 hit movie “Hotel Rwanda,” has been convicted on terrorism charges, Reuters reported.Rwandan Judge Beatrice Mukamurenzi said in court Monday that...
Read more

What Putin wants when he meets Biden

What does Russia's president Vladimir Putin want from his summit with President Joe Biden in Switzerland.
Read more

Apple’s Next Step in Services Could Be New Bundles,...

Hey everyone, it’s Mark. The next phase of Apple’s services push is likely to include deeper integration among offerings and more bundles. Also: Apple hires Facebook’s AR/VR communications chief as it readies its own headset and rising Covid cases close Apple…
Read more

Police said it is no longer an active situation.
Read more

‘My husband refused a divorce for nine years’

Under orthodox Jewish law, a husband must give his wife a document to allow the marriage to end.
Read more

After four years of taking a backseat role under Donald Trump, the Biden administration was a driving force at the Glasgow COP26 talks. But winning a strong global agreement remains difficult.
Read more

The deputy press secretary will be just the second African-American woman to lead a White House press briefing.
Read more

The Environmental Protection Agency (EPA) is reportedly proposing cuts for how much biofuel has to be blended into other fuels. ...
Read more

The 9th U.S. Circuit Court of Appeals on Monday revived a legal challenge to California's trailblazing law requiring companies headquartered there to include women on their boards.
Read more

Halloween is one of our favorite holidays here at Disney, and I’m already getting so excited to celebrat­e because we are now #HalfwaytoHalloween! It’s the perfect time for a “shriek peek” at some exciting new products that are coming soon, and some that you …
Read more

‘After Life’ Season 3 Cast: Meet the Characters in...

"After Life" Season 3 is heading back to Tambury to catch up with Tony, Postman Pat, Emma and more.
Read more

Israel PM: Lebanon responsible for attacks, Hezbollah or not

The Supreme Court says it will not hear a case out of Pennsylvania related to the 2020 election, a case that had lingered while similar election challenges had already been rejected by the justices
Read more

Biden tries to navigate fits and starts of economic...

An onslaught of surprising economic data is raising difficult questions for President Biden as he attempts to steer the recovery without derailing it.Republicans have pounced on unexpectedly high...
Read more

Hi-Res audio lovers have a new friend in the...

OneOdio’s Monitor 60 provide a stylish and high-fidelity option for audiophiles, and they have a special Black Friday deal.
Read more

TyTy Washington Jr. is making the most of his increased playing time.
Read more

Police have arrested several people during protests in Elizabeth City, North Carolina, including two journalists who were covering the demonstration
Read more

British judges granted a U.S. request to extradite Julian Assange, in a remarkable legal blow to the man who has spent almost a decade fighting attempts to remove him from Britain.
Read more

The NHL on Monday postponed the Seattle Kraken’s home game scheduled for Thursday against Ottawa because of COVID-19 problems with the Senators.
Read more

The veteran television journalist who accused CNN host Chris Cuomo of sexually harassing her when they worked together at ABC News doesn’t think the "Cuomo Prime Time" namesake has learned his lesson.
Read more

The millennial generation is undeniably shaping and influencing investment decisions across the economy. Millennials are demanding a heightened focus on equity, racial justice and the environment. With this trend, the focus on valuation of social, environment…
Read more

The UK share index tracks similar falls in the US and Asia on worries that inflation is set to pick up.
Read more

The children, who were not named to protect their privacy, have mild symptoms and will be quarantined.
Read more

Students Show Off Bizarre Accommodation With a Belfry and...

The students made a video of their house, including the attic, basement, dungeon and belfry, where Steve the pigeon lives.
Read more

U.K. Prime Minister Boris Johnson is facing an unprecedented challenge to his authority after the controversial strategist who masterminded his rise to power declared he is unfit to hold the job.
Read more

A plurality of voters are in favor of making Juneteenth a national holiday, according to a new poll released by Gallup on Tuesday....
Read more

Panthers get 41 shots on net but are shut out by Blackhawks...