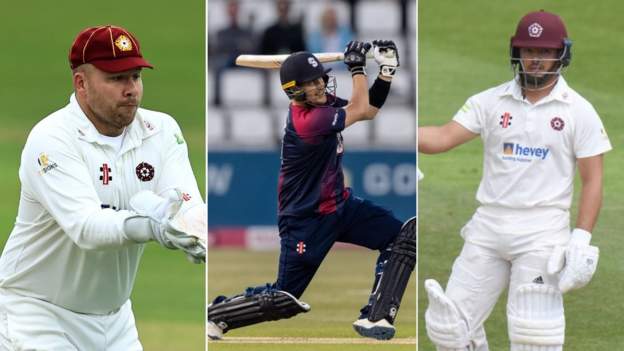 Northamptonshire have made a change of captain less than a fortnight before the start of the 2022 County Championship season.

They have named Ricardo Vasconcelos as red-ball skipper in place of Adam Rossington, with Josh Cobb leading their white-ball sides.

Rossington, who succeeded Alex Wakely as captain in 2019, led Northants in 10 of last season’s 14 Championship games.

He took charge in Northants’ other four Championship games in 2021 and also led the side in the One-Day Cup.

Cobb, who was already Northants Steelbacks’ T20 Blast skipper, remains in that role.

New Northants head coach John Sadler, who replaced long-serving David Ripley at the end of last season, said: “Ricardo is an incredible young player and now at the stage of his career where he’s ready to thrive and take on this added responsibility.

“Josh has been brilliant. His knowledge of the white ball game is incredible. He’s so tactically astute.”

Northamptonshire are back in Division One of the County Championship, following the ECB’s latest end-of-season restructure.

They start the new season on 7 April with a home game against Gloucestershire. Should masks become optional in schools?

Hocus Pocus 2 Resurrects The Sanderson Sisters For A...

Turner Prize 2023 to be awarded at Towner Eastbourne

Exiled Ex-PM of Kazakhstan Hopes Unrest Is ‘Signal for...

Icahn Documentary Shows the Laughs as Well as the...

Two dead and five in hospital after head-on crash...

Your Evening Briefing: Biden Basks as US Jobs Juggernaut...

New Jersey Retail Pot Sales Are Just Around the...

Apple to Boost Pay for US Workers as Inflation...

How it really happened: the Inflation Reduction Act

How to Get the Hottest Crypto Jobs: Start by...

Warriors Co-Owner Sparks Fury After Saying ‘Nobody Cares’ About China’s...

Banker sentenced to year in prison in Manafort loan...

Israel Set to Remove U.S., Other Countries From ‘Red’...

Russia ‘Obviously at a Loss,’ ‘Improvising’ in War: Ex-Putin...

Sadio Mane on Liverpool, Bayern Munich and winning with...

Dems wonder if Biden can rise to moment

Trump Stages Rally in Wyoming in His Quest to...

‘Claim to Fame’: X on Why Lying About Laverne...

Bongino asks what happens when Putin loses support at...

Where is Russia’s cyber blitzkrieg? | TheHill – The...

Unlocked doors were ‘first line of defense’ at Uvalde...

The best podcast app on iOS gets a major redesign, leaving Apple's...