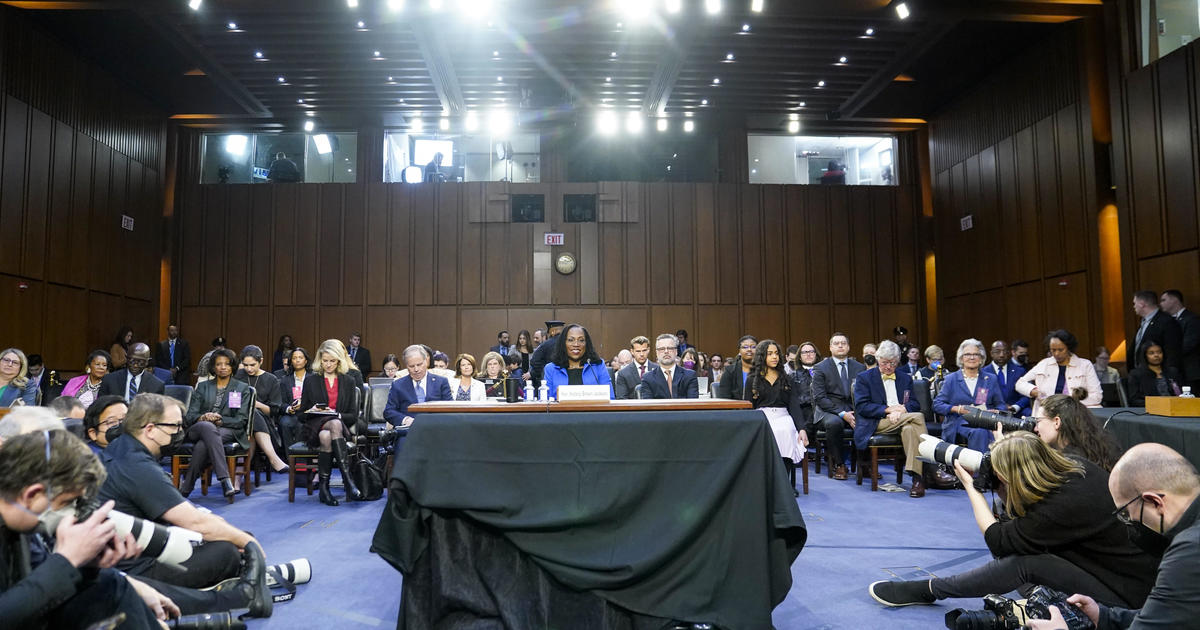 Washington — The Senate Judiciary Committee is convening Thursday for its fourth and final day of confirmation hearings for Judge Ketanji Brown Jackson’s nomination to the Supreme Court, where senators will hear from outside experts and witnesses beginning at 9 a.m.

Jackson, 51, would be the first Black woman confirmed to the high court if approved by the Senate. She fielded questions from senators for two marathon days of questioning on Tuesday and Wednesday, in which Republicans pressed her to explain sentencing decisions in a number of child pornography cases during her time as a federal judge in a U.S. district court. Jackson repeatedly defended her record, explaining her approach to cases and rebutting suggestions that she imposed lenient sentences.

Thursday’s hearing will include testimony from three representatives from the American Bar Association and panels of outside witnesses called by Democratic and Republican members.

On Wednesday, 10 of the 11 Republicans on the committee requested access to pre-sentencing reports that are prepared by a defendant’s probation officer and given to a judge before sentencing. The reports are filed under seal, as they contain highly sensitive information, including information about victims.

Jackson repeatedly told senators they did not have access to all the filings that informed her sentencing decisions. The request prompted sparring between Republicans and Judiciary Committee Chairman Dick Durbin, who said he opposed GOP members’ request to see the pre-sentencing reports in the roughly seven cases they raised.

“The information contained in these reports is dangerous, dangerous to the victims, and to the innocent people who are mentioned in these reports and unnecessary at this point,” Durbin said. “It’s merely a fishing expedition in dangerous territory. Classified settings, redacted versions of the reports, this has never happened in the history of this committee.”

Jackson, a Harvard graduate, said that if confirmed, she would recuse herself from the case next term over Harvard’s admissions policies. She currently serves on the Board of Overseers, and has faced calls to recuse herself in this case.

Democrats, meanwhile, continued their praise of Jackson. Democratic Senator Cory Booker, who is also Black, emotionally recounted how much it meant to him to see a Black woman on the court.Jackson appeared to wipe her eyes while he spoke.

“I’m sorry, you’re a person that is so much more than your race and gender,” Booker said. “You’re a Christian, you’re a mom, you’re an intellect, you love books. But for me, I’m sorry, it’s hard for me not to look at you and not see my mom, not to see my cousins, one of them who had to come here and sit behind you. She had to have your back. I see my ancestors in yours. Nobody’s going to steal the joy of that woman in the street, or the calls that I’m getting, or the texts. Nobody’s going to steal that joy.”

President Biden nominated Jackson last month to replace liberal Justice Stephen Breyer, who, at 83, is the oldest justice on the Supreme Court. Breyer will retire at the end of this term. Think your home value is soaring? Talk to a...

Biden, first lady to travel to Uvalde on Sunday...

California forest fire burns out of control near Yosemite

Games Bring Space Exploration Home. But They Omit the...

Three Wise Men: Men Can Be Vulnerable, Too

Two-thirds of Americans support accepting Ukrainian refugees into US:...

Ex-Clinton strategist reveals why she no longer appears on...

2 officers wounded in Houston shooting out of hospital

Senegal midwives go on trial in Louga over Astou...

Kamila Valieva: Skating minimum age to be raised to...

Rescued Oklahoma tigers get care in California and new...

PMQs: Saville Roberts and Johnson on MPs lying in...

Today in History: July 20, Armstrong and Aldrin on...

Levelling up: ‘It’s about people, not shiny new buildings’

Hawaiian Air Aiming to Ramp Up Flight Service to...

Ahead of Mother’s Day, Florida rabbi reveals gratitude for...

Halo Infinite Season 2 will begin in May, bringing...

Youngkin underwater on handling of coronavirus in Virginia: PPP...

Scots parents return from holiday to find son is...

Russia ‘ready to discuss’ prisoner swap with U.S. after...

Douglas Brinkley on voting rights and the “new Jim...

In the footsteps of the women who escaped a...

Bloomberg Westminster: Did Sunak Do Enough?