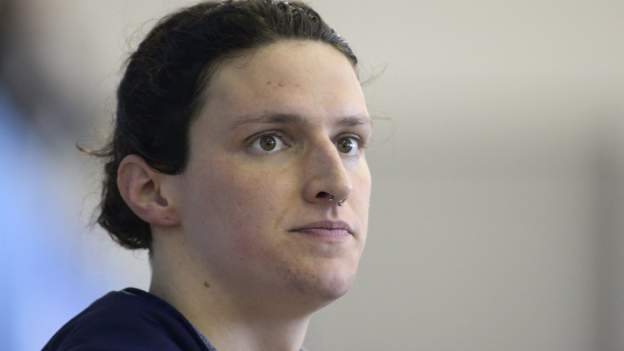 In an Instagram post, US Olympic swimmer Erica Sullivan (second from right, pictured in cowboy hat) said this image – of transgender woman Lia Thomas (L) on the podium, with Sullivan and friends and team-mates Emma Weyant and Brooke Forde stood off to the right of the podium – had been “misrepresented”

Florida governor Ron DeSantis has signed a proclamation recognising runner-up Emma Weyant as the winner of the highest US national college swimming title – an event she lost to transgender athlete Lia Thomas.

She took victory in the women’s 500-yard freestyle in Atlanta.

But on Tuesday Republican governor DeSantis said the result “undermined the integrity of the competition”.

Thomas, who swims for the University of Pennsylvania, secured the title in four minutes 33.24 seconds in Atlanta.

Weyant, of Sarasota, Florida, who won 400m individual medley silver at the Tokyo Olympics, finished 1.75secs behind in second.

He said: “The NCAA is basically taking efforts to destroy women’s athletics, they’re trying to undermine the integrity of the competition and they’re crowning somebody else the women’s champion and we think that’s wrong.

US swimming updated its policy in February to allow transgender athletes to swim in elite events, alongside criteria that aims to reduce any unfair advantage.

On Monday World Athletics president Lord Coe issued a warning over the future of women’s sport if sporting organisations get regulations for transgender athletes wrong. How Muni Investments Are Faring In 2022 (Radio)

Biden says monkeypox cases something to “be concerned about”

Biden is pro-union, not pro-worker

Family of Little Leaguer who suffered severe injuries after...

Firefighters in Spain battle wildfires across the country

Apple Finds Its Next Big Business: Showing Ads on...

Searching for life on Mars from a Scottish island

Japan’s Inflation Spread to Biggest Share of Items Since...

Johnny Depp vs. Amber Heard: what will the ‘Aquaman’...

DP World Tour not a feeder for PGA Tour,...

Seoul says N. Korea will self-destruct if it uses...

Killing of Mexican reporter may be linked to local...

Ed Markey is walking on sunshine

Sony unveils electric SUV as part of push into...

India May Allow Sugar Mills to Export More to...

Domestic abuse: 'I think I could have save my daughter from murder'
Komal Sri Kumar on the Markets (Radio)