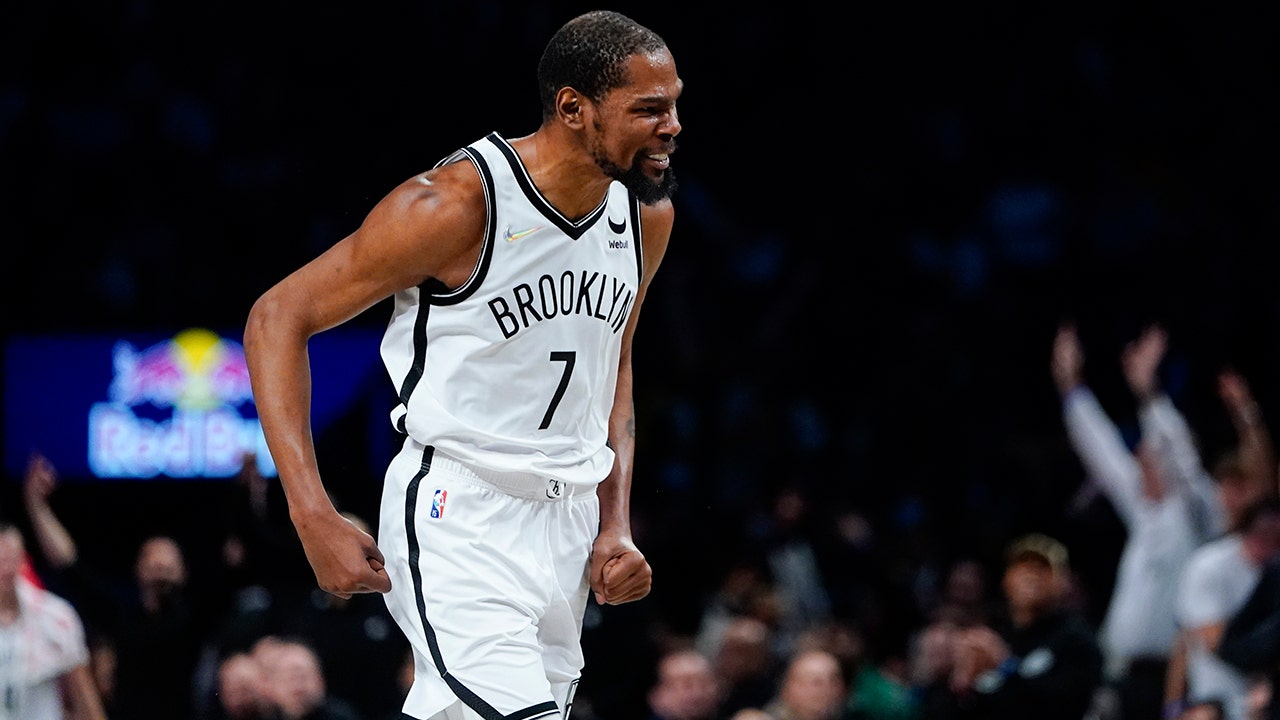 Already without Kyrie Irving and Ben Simmons, the Brooklyn Nets were down another starter to illness and lost one to injury.

They still had Kevin Durant, and that was enough against Utah.

“He made us pay,” Jazz forward Rudy Gay said.

Durant had 37 points, nine rebounds and eight assists, and the Nets beat the Jazz 114-106 on Monday night for their sixth win in seven games.

Bruce Brown added 22 points for the Nets, who stayed in sole possession of eighth place in the Eastern Conference. Nic Claxton, starting for ailing center Andre Drummond, made all five shots and scored 11 in the Nets 38-point third quarter that broke open the game.

Brooklyn Nets’ Kevin Durant (7) celebrates after making a 3-point basket during the second half of an NBA basketball game against the Utah Jazz, Monday, March 21, 2022, in New York.

Durant scored 15 in that period and said Brooklyn’s strong play lately has been a team effort.

“I just think were rallying around each other,” he said. “Were making big plays, were just doing it together more than anything. Its just a collective effort.”

Mostly, it’s Durant. Gay was asked how a two-point game got away from Utah so quickly in the third.

“KD had like 20 points. Thats probably the start,” Gay said.

He said Durant punished Utah for strategic mistakes, which included having centers Rudy Gobert and Hassan Whiteside trying to contain the superstar forward at times.

“We heard they were starting to switch, so really it was just get him the ball and get out of the way,” Brown said. “We know Gobert and Hassan cant stay with him at all.”

Donovan Mitchell scored 30 for the Jazz, who had their three-game winning streak snapped. Jordan Clarkson added 19 and Mike Conley had 18 points and seven assists after sitting out a victory Sunday at New York to rest his right knee.

The Nets’ two-point halftime lead was down to one before play even began in the second half after they were given a technical foul for a second delay of game violation. But then Claxton made the first two baskets in the third to get their big quarter going.

The game seemed fully in the Nets’ control when Durant’s 3-pointer made it 108-87 midway through the fourth, but Utah put together a 19-4 surge that trimmed it to 112-106 with 57 seconds to play. Durant then halted Utah’s momentum by throwing a lob pass that Claxton slammed down with 37 seconds remaining.

Drummond was out with an illness not related to COVID-19. Nets guard Seth Curry, who came over with him and Simmons in the trade for James Harden, then missed the second half with a sprained left ankle.

Jazz: Royce O’Neale missed all four shots from the field and had two points. … Trent Forrest returned after missing five games with a sprained right wrist and was 1 of 6 for four points. … The Jazz are 1-1 on a six-game road trip.

Nets: Goran Dragic started despite left knee soreness from what coach Steve Nash said was a fall during Brooklyn’s victory over Portland on Friday. … The Nets used their 40th different starting lineup of the season. … With LaMarcus Aldridge out with a right hip injury, Nash said it’s possible rookie Day’Ron Sharpe could be recalled from the NBA G League for Brooklyn’s upcoming two road games if Drummond’s illness lasts beyond Tuesday.

Nash said Simmons’ injury was a herniated disk, an issue he had earlier in his career that had flared up again. Nash said he still believes Simmons will play this season, even with only 10 regular-season games remaining.

The Nets announced that Joe Harris had left ankle ligament reconstruction surgery Monday in Green Bay, Wisconsin. He is expected to be ready by the start of training camp. Credit Market Pain Is Too Muted to Save Stocks

Complete list of winners from the CMT Music Awards

Dad Dragged for Saying Son’s Hobby Is ‘Embarrassing and...

How Many People Should I Invite to My Wedding?...

‘More time to be a dad’: Australian treasurer poised...

Beavers Return to London for First Time in More...

Key witness in Nipsey Hussle killing is pressed over...

Israel holding more than 600 without charge, most since...

Mortgage demand drops to a 22-year low as higher...

Under 18s will no longer be sent to young...

Watters: Canada and Mexico are ‘losing their minds’

Zelenskyy downplays Putin’s most extreme threats as ‘bluff’: ‘Nothing...

BHP Posts Record Earnings With a Warning On Weaker...

Trump Fans Are Making DWAC the Best-Performing SPAC of...

The latest Windows Server update is breaking a bunch...

Almost Half of Brits Think Charles Should Step Aside...

Ever wanted to play Doom in Minecraft? This player...

Stranger Things 5 will have shorter episodes – and...

EXPLAINER: Russia-backed rebels a thorn in Ukraine’s side