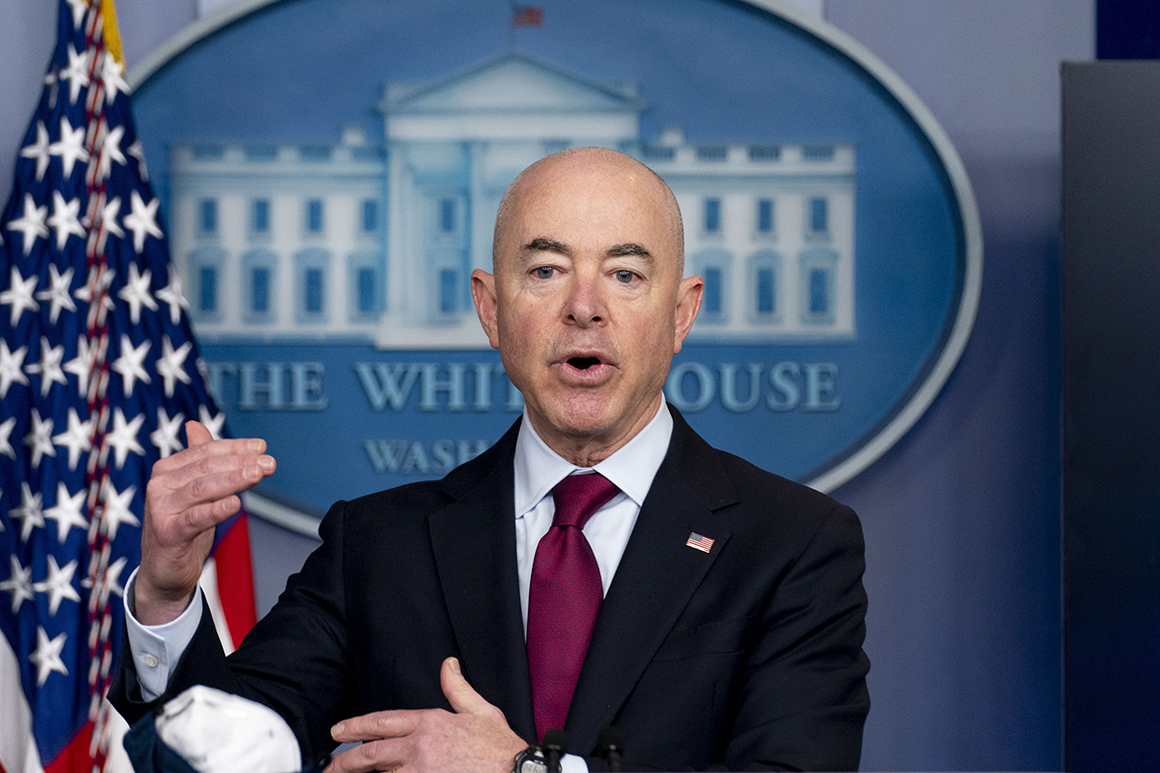 The rapid increase in migrants seeking to enter the U.S., which the Biden administration refuses to call a “crisis,” has become an urgent challenge for the president just two months into his term. In February, U.S. border agents apprehended more than 100,000 migrants, in what was a 28 percent increase from the previous month.

In addition to criticism that their policies are enabling the surge, administration officials are also facing questions for not providing media access to border facilities so the public can get a firsthand look at the situation. Mayorkas said “we’re working on that” but made clear it wasn’t a top priority. He said the administration was dealing with a pandemic and “not focused on ride-alongs right now.”

“Meet the Press” host Chuck Todd asked Mayorkas if there was a “gag order” obstructing media access, which Mayorkas denied.

“We are focused on our operations, in removing children from those crowded Border Patrol stations to the Health and Human Services facilities that can best shelter them,” he said. “And we are also working on providing access so the American public can in a safe way, without jeopardizing our operations, see what is going on. We’re working on that.” The Brooklyn Nets won’t allow Kyrie Irving to participate in any team activities until he gets the COVID-19 vaccine, the team announced Tuesday morning.
Read more

The FBI is conducting law enforcement activity at the home of Russian oligarch Oleg Deripaska on Tuesday in the nation’s capital.
Read more

Hong Kong’s Apple Daily board may stop publication this...

Two Conservative MPs write to Boris Johnson urging him to listen to warnings about the benefit cut.
Read more

Facebook's oversight board has upheld the company's decision to suspend Donald Trump's account following posts he made during the attack on the US Congress by his supporters in January. Also in the programme: President Emmanuel Macron has laid a wreath at th…
Read more

In the past two weeks, Facebook has been scrutinized by lawmakers on Capitol Hill after a scathing report by the Wall Street Journal found the company has ignored the fact that its platforms have a negative impact on the mental health of teenagers. Executive …
Read more

California’s Racial Quota for Company Boards Is Challenged in...

California faces a court challenge to a 2020 law that requires public companies to diversify their boards by including minority members.
Read more

Black-owned farms in the U.S. are disappearing fast

"I think discrimination is still pervasive. I think that it's done in a much subtler way," one Black farmer said.
Read more

An employment tribunal accepts evidence of a "horrific culture" in part of Police Scotland.
Read more

Edwin Poots: Who is the new leader of the...

The NI Assembly member for Lagan Valley has become the fourth leader of the party in its 50-year history.
Read more

The House passed legislation on Tuesday that would eliminate the federal disparity in prison sentences for crack and powder cocaine offenses, in an effort to enact criminal justice reform on a bipartisan basis.The...
Read more

These are the biggest security flaws of 2021 so...

New joint advisory from the US, UK and Australia aims to raise awareness of global cyber weaknesses.
Read more

Kanye West is holding a new listening event and...

Kanye West is holding more listening events in anticipation of his "Donda" album, and the next one will have Covid-19 vaccines available.
Read more

The prime minister says the economy is facing the "stresses and strains that you'd expect" after Covid.
Read more

The Realme 8 and Realme 8 Pro will launch in India in March. Here is everything you need about the upcoming budget phones.
Read more

Newlyweds travel across the country in a van after...

Ben and Malory Landheer, originally from Charlotte, North Carolina, decided to leave their jobs, their apartment and their city to travel across the country in a refurbished van.
Read more

Kemp: Voting law ‘worth the boycotts as well as...

Why the US needs a federal manufacturing strategy

We all need to come together — Republicans and Democrats alike — to seize this moment. We have an opportunity to secure our position as a world leader in advanced manufacturing, set the global standard for the next generation of innovation.
Read more

As prosecutors and defence lawyers begin their closing arguments, we look back at five key moments of the trial.
Read more

‘Cinderella’ tries to update the fairy tale, but the...

Trying to retrofit "Cinderella" with a feminist sensibility is a big-time challenge, and despite ample energy and the sing-along benefits of a jukebox musical, a new version starring Camila Cabello can't crack that code. Premiering on Amazon, the movie mostly…
Read more

iPhone 12 Pro Max deals can be expensive but this offer from Sky Mobile helps bring the costs right down at just £43.
Read more

Report: Most nations fall far short in plans to...

Yellen to Call for Global Minimum Company Tax in...

Gov calls for probe into traffic stop of Black...

Man who broke into Eminem’s home gets probation, time...

Chinese-speaking hackers recently targeted the top tiers of the Afghan government, along with the governments of other nearby nations, research published Thursday found.According to findings from cybersecurity group Check Point Research, a hacking...
Read more

‘My pet has helped me so much during the...

Research has shown pets can have a huge benefit to our mental health - especially this past year.
Read more

Tackle your finances and get the best from your cash with this desktop or mobile money management package.
Read more

The Democratic Republic of Congo is working on ways to entice more investment into its mines as the green revolution boosts demand for...
Read more

Former "90 Day Fiancé" star Geoffrey Ian Paschel was convicted of aggravated kidnapping, domestic assault and one other charge after sitting through a two-day trial.
Read more

American Hegemony, Now and in the Future

The U.S. squandered the unipolar moment, but we aren't into simple multipolarity quite yet. The post American Hegemony, Now and in the Future appeared first on The American Conservative.
Read more

The wife of notorious Mexican drug kingpin Joaquin "El Chapo" Guzman appeared in a Washington, D.C., court on Thursday, where she officially announced plans to plead guilty to federal charges in connection with allegations she helped her husband run his multi…
Read more

Bubbling beneath France’s political landscape is an assortment of ultra-right groups, an invisible subculture that shot to the nation’s attention when a young man slapped President Emmanuel Macron and blurted out a centuries-old royalist cry
Read more

Charles Donohoe is the latest to be locked up in recent days while fighting charges of conspiring to stop the certification of the 2020 election.
Read more

Watch all the goals from Saturday's Scottish Premiership wins for Rangers, Hearts and Motherwell.
Read more

Why NASA Made a Helicopter for Mars

It's not easy designing a new helicopter, especially if that new helicopter has to survive a ride on a rocket into space. NASA's Ingenuity helicopter is the first machine aerial vehicle to fly on a planet outside Earth. Ingenuity was designed specifically to …
Read more

The building is part of a new memorial at Babyn Yar, a site where nearly 34,000 Jews were murdered.
Read more

The GOP-led states say the benefits aren't needed. But some out-of-work people say they are still struggling.
Read more

The former US president urges other countries to restrict use of social media platforms.
Read more

Biden asks federal employees to get vaccinated or submit...

President Biden on Thursday is directing all federal employees and onsite contractors to show that they are vaccinated or otherwise submit to regular coronavirus testing, a major step that will likely cause other private...
Read more

Opening-night squad lists for the National Basketball Association's 2021-22 season, which begins later on Tuesday, will feature 109 international players from 39 countries, according to the league.
Read more

Overnight Health Care: How a GOP governor and a...

Welcome to Tuesday's Overnight Health Care. More people are rolling up their sleeves for their first COVID-19 shot, as the U.S.'s seven-day average for new vaccine recipients reached ...
Read more

Sen. Joni Ernst has now teamed up with Gillibrand to champion the reform.
Read more

Defense Secretary Lloyd Austin is telling Congress that the U.S. military has already begun conducting combat operations and surveillance in Afghanistan from outside the country’s borders, as the troop withdrawal continues
Read more

Texas Lt. Gov. Dan Patrick said Friday that the Conservative Political Action Conference (CPAC) should stay in Texas permanently, as he touted the state's COVID-19 approach that conference Chairman Matt Schlapp said was part of the reason he chose to host an …
Read more

Our Tailscale review puts this “no config” VPN to the test to see if it really is as simple and safe as it claims.
Read more

The Environmental Protection Agency announced on Wednesday that package- and freight-delivery companies United Parcel Service Inc and TForce Freight Inc will pay a $3.8 million fine in exchange for the agency dropping administrative claims that they polluted …
Read more

Cheney: Fox News has ‘a particular obligation’ to refute...

The radio host must pay the families of victims after calling the Sandy Hook school shooting a "hoax".
Read more

Even the Swiss Are Tightening the Screws on the...

Switzerland, which has stood out among European neighbors for its generally more laissez-faire approach to the pandemic, is joining the ranks of countries now increasing pressure on the unvaccinated.
Read more

A large Iranian navy ship was seen in the Baltic Sea and appears to be heading toward Russia.The Danish Defense Ministry posted aerial photos of the Iranian destroyer Sahand making its way throug...
Read more

Indian banks are likely to see a rise in gross non-performing assets (NPA) to 8-9% of total lending at the end of this fiscal year from 7.5% last year, rating agency CRISIL said in a report on Tuesday.
Read more

Dying of loneliness: What COVID-19 has taught us about the opioid epidemic