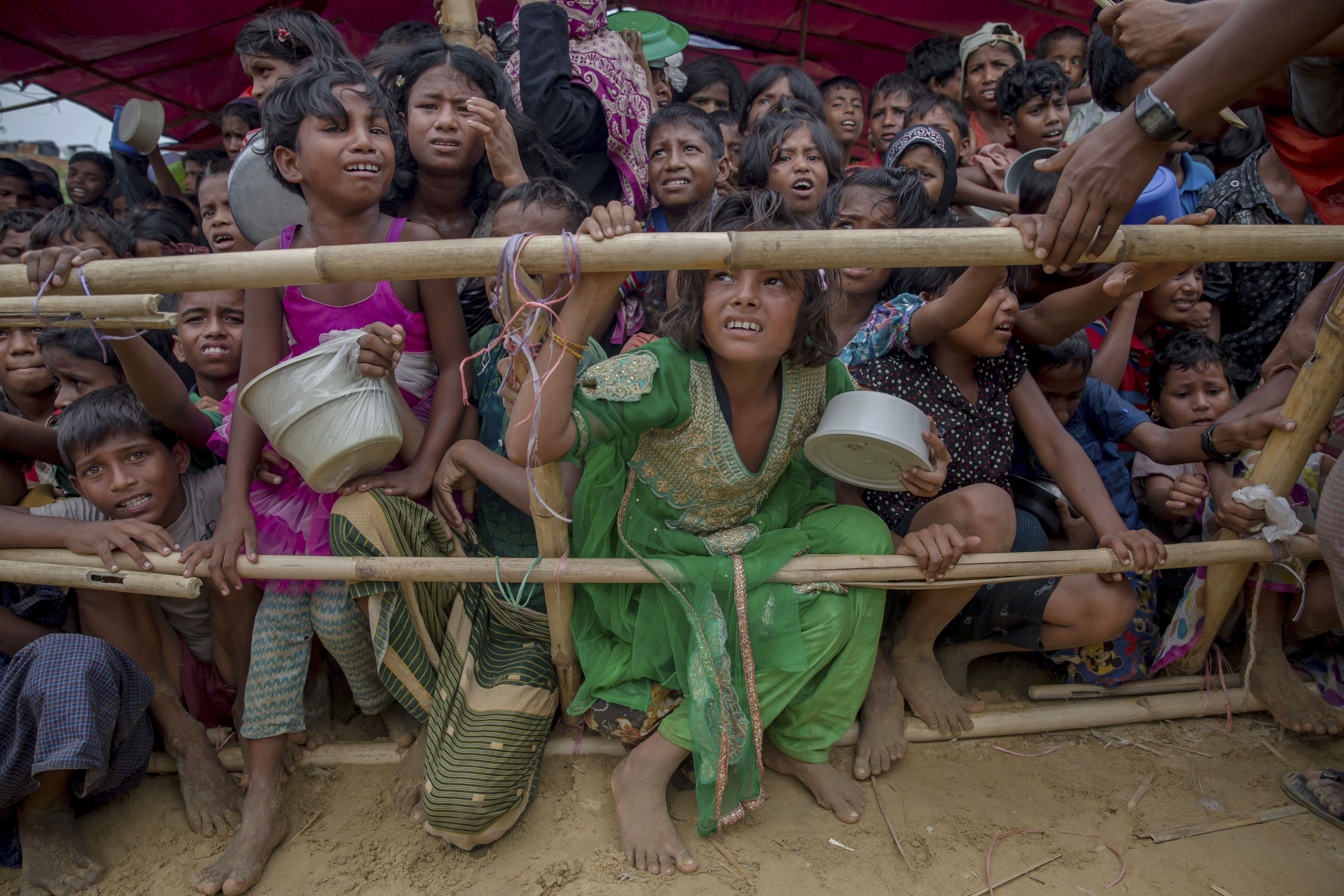 Blinken unveiled the determination at the U.S. Holocaust Memorial Museum, one of the entities that had long urged the State Department to make the call. He specifically blamed the military, not Myanmars now-ousted civilian government, for the abuses. And he laid out example after example of the atrocities the Rohingya faced in the crackdown that began in August 2017, from children being stomped upon by soldiers to some of the troops revealing that they were told to shoot Rohingya on sight.

He said the evidence was abundant that the Myanmar military intended to destroy the Rohingya in whole or in part, meeting one element of the definition of genocide.

Its critically important to reach the determination of genocide, but at the same time, we must remember that behind each of these numbers are countless individual acts of cruelty, and inhumanity, Blinken said. The day will come when those responsible for these appalling acts will have to answer for them.

This determination is long overdue, said Kelley Currie, a long-time Myanmar specialist who served as ambassador-at-large for global womens issues during the Trump administration. It should have been made years ago, and any political or policy justification for not doing it vanished with the militarys coup.

Currie and others urged the Biden administration to impose more punishments on the Myanmar military for the atrocities it has committed since the coup. According to Human Rights Watch, Myanmar security forces have killed some 1,600 people, detained more than 12,000 and displaced more than 500,000 in crackdowns as the population has resisted the return to military rule. The post-coup operations have often targeted ethnic groups beyond the Rohingya who, too, have long struggled.

The Myanmar military will continue to commit atrocities so long as other governments fail to impose measures to hold them accountable, said John Sifton, Asia advocacy director for Human Rights Watch.

As word spread of Blinkens decision, the International Campaign for the Rohingya declared on Twitter: This is huge. It should set the stage for further US sanctions on the #Myanmar military, including action to block oil and gas money flows to the junta.

Efforts to reach officials at the Myanmar embassy in Washington were not immediately successful. In the past, Myanmar officials have insisted the 2017 operation was legitimate.

Blinken spent significant time in his speech discussing the coup and its aftermath, saying at one point, There is no one the Burmese military wont come for.

The Rohingya have suffered long-standing oppression in Myanmar, a majority Buddhist country, and were stripped of their citizenship in the 1980s. For decades, the country was ruled by its military, but a partial transition to civilian rule over the past 15 years encouraged heavily by Washington did not, as some had hoped, lead to better conditions for the Rohingya. In fact, their lives got worse.

In his speech Monday, Blinken laid out much of the history of Myanmars mistreatment of the Rohingya, noting that genocides are not necessarily sudden events but ongoing processes.

The 2017 military crackdown, ostensibly a response to an attack by Rohingya militants, was exceptionally severe. Thousands of Rohingya were killed and some 700,000 fled into neighboring Bangladesh, where they remain in camps.

The U.S. government, led by President Donald Trump, responded to the crisis by imposing sanctions on Myanmars military, sending humanitarian aid and taking other steps to aid the Rohingya. For geopolitical and other reasons, however, the administration held off on formally recognizing the Rohingya as victims of genocide and crimes against humanity. Instead, it stuck with the term ethnic cleansing, which, unlike genocide and crimes against humanity, has little meaning in international law.

One reason the Trump administration held off on the declaration was to avoid weakening Myanmars fragile civilian government, led by famed Nobel Peace Prize laureate Aung San Suu Kyi, which had no serious control over the military. In a sign of the perilous politics surrounding the Rohingya issue, Suu Kyi did not defend the embattled Muslim groups cause, tarnishing her global image.

The Trump administration also worried that accusing Myanmar of genocide would lead it to further turn toward China as a partner, despite the Myanmar militarys wary relations with Beijing. (There also were reports that then Secretary of State Mike Pompeo was upset about leaks to POLITICO about the State Departments investigation into what happened to the Rohingya.)

Prior to leaving office, Pompeo declared that the Chinese government was carrying out a genocide against Uyghur Muslims in Xinjiang, but he said nothing about the Rohingya. That fueled bipartisan frustration in Congress and elsewhere about logical inconsistencies in the State Departments deliberations on atrocities.

The frustration grew over the past year with President Joe Biden in charge. Biden had declared during his presidential campaign that the Uyghurs were genocide victims. That move appeared to be campaign maneuver to make Biden look tough on Beijing, which he and Trump had identified as a top U.S. foe.

But Biden and his aides held off on making the same declaration for the Rohingya, both during the campaign and his first year in office. Again, China played a role, with the Biden team wary of not strengthening Chinas hand in Myanmar. But the Myanmar militarys ouster of the civilian government just days into Bidens tenure also confused the issue.

Before the coup, some State Department officials argued that accusing Myanmar of genocide could lead to a military coup that ended the countrys democratic experiment. After the coup, some U.S. diplomats warned that accusing the country of genocide could make it harder to convince the military to restore democracy. (The U.S. imposed sanctions on Myanmar related to the coup itself.)

The logical contortions over the question of genocide exasperated U.S. lawmakers and others, even though the American government has a long history of being inconsistent and late on recognizing that crime.

Such processes must always be carried out objectively, consistently, and in a way that transcends geopolitical considerations, said Sen. Jeff Merkley (D-Ore.), who nonetheless praised the Biden administration this week for having demonstrated that it is on the right side of history and stands with the people of Burma.

Over the months, however, even officials in the State Departments East Asia and Pacific bureau, where there had been significant resistance to a genocide declaration, came around, according to a Biden administration official.

Ultimately, the decision to declare a genocide is the prerogative of the secretary of State, the official noted. But the East Asia bureau, as well as the departments divisions that focus on human rights and global criminal justice co-authored the memo that Blinken signed, the official said.

The important thing is its happening, the official said. But I agree, human rights consistency and credibility is important.

The promise of the House Select Committee on the...

From Washington: The President’s Plea For Gun Control

China warns ASEAN nations to avoid being used as...

The Rise Of Brand-New Secondhand EVs

BMW is selling a $17 monthly subscription plan for...

Will abortion be on more state ballots after Kansas...

Ex-cop who killed Black teen leaving prison: Was it...

This creepy new Android malware records your audio and...

The Tricky Business of Elon Musk Getting Twitter Fire-Hose...

POLITICO Playbook: How gas prices could crush Biden and...

A Georgia solar factory shows the promise — and...

Sorry, Apple Watch and watchOS 9, I prefer to...

The Dish: Chef David Nayfeld on his Italian food...

Singapore Aims to Give Kids Under Five Covid Vaccines

A New Way to Curb the Rise of Oversized...

Sound On: Trump vs. DOJ, Hunt for Earth-bound Asteroids...

Critics are raving about Netflix's latest documentary – but viewers aren't convinced
Saudi Arabia says it 'won't bear any responsibility' for oil shortages after...