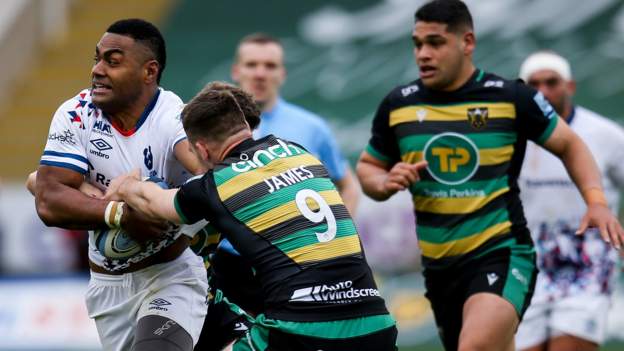 Bristol extended their lead at the top of Premiership but needed two late tries to beat Northampton.

First-half tries from Henry Purdy and Siva Naulago looked to have put the Bears in control at Franklin’s Gardens.

A score on the stroke of half-time from Nick Isiekwe kept Saints in touch and George Furbank’s try on 58 minutes put them into the lead.

But two tries in a minute late on from Luke Morahan and Andy Uren sealed Bristol’s bonus-point win.

Northampton stay fifth after Sale’s win, while Bristol extend their lead over Exeter.

The Dow dropped nearly 400 points Friday as a massive selloff to begin 2016 continued; When police officer Ryan Davis lost his partner Jethro in the line of duty, it left a huge hole.
Read more

Beijing’s top official in Hong Kong is warning foreign forces not to interfere with the bottom line of national security in the city, threatening retaliation amid tensions between China and Western powers
Read more

Haney vs Linares live stream: how to watch title...

Is the veteran former champ slick enough to down the new king? Here's how to get a Devin Haney vs Jorge Linares live stream - including free ways to watch.
Read more

Nobel prize ceremonies are again scaled down due to...

For the second year in a row, the Nobel prize ceremonies have been reined in and scaled down events are planned because of uncertainty about the pandemic and international travel possibilities
Read more

Controversy over the equestrian memorial to Robert E
Read more

The award of more than five million Apple shares comes as Mr Cook marks a decade as the firm's boss.
Read more

Afghan man suing US, wants to reunite with sons

An Afghan man living in California is suing the U.S. to reunite with his sons who are still in Afghanistan after American forces withdrew in August.The International Refugee Assistance Project filed a ...
Read more

Candidates competing in the Democratic primary are banking on support in New York’s traditional battleground areas. But the advent of a new ballot system has scrambled political conventions.
Read more

AT&T will use Ericsson radio kit to spread C-band...

While Bashar al-Assad is still shunned by the West who blame him for a decade of brutal war in Syria, a shift is under way in the Middle East where Arab allies of the United States are bringing him in from the cold by reviving economic and diplomatic ties.
Read more

Anger as France slashes visas for Algeria, Morocco and...

France has accused the north African countries of failing to co-operate over returning nationals.
Read more

G-7 nations gather to pledge 1B vaccine doses for...

Mattress brand Beautyrest is giving someone the chance to spend the night at the Long Island Aquarium in August as a way to promote its new Harmony Lux Hybrid mattress.
Read more

Moderna says its COVID-19 shot works in kids as...

Police officers have made "numerous" arrests connected to looting in New Orleans as the city continues relief efforts in the wake of Hurricane Ida, officials said Monday.
Read more

‘Happy Days’ alum Ron Howard reveals who he would...

The filmmaker and 'Andy Griffith Show' actor sat down with his brother, fellow performer Clint Howard, and opened up about the constant questions he often hears from fans who remain excited at the prospect of seeing the show come back.
Read more

Lee Child: Why Forsyth’s Day Of The Jackal was...

After leaks and rumors, we got our first look at Windows 11, and the future of Windows as a platform, today. Here's what you have to look forward to this fall.
Read more

City where Daunte Wright shot to vote on policing...

In an excerpt from his new book, Jesse Watters describes the origin of the "Mom Texts" segment from "The Five" and their influence on his book.
Read more

Gerard Gallant is taking over a young team with potential as coach of the New York Rangers, just like his three previous stops.
Read more

Meghan Markle, Duchess of Sussex, said that her illustrated children's book "The Bench" depicts "another side of masculinity."
Read more

No charges will be filed against the members of the U.S. Marshal task force who fatally shot Winston Smith in Minneapolis in early June.In letter published by ...
Read more

The suspect was taken into custody by police.
Read more

Haiti’s government is starting to crumble as Prime Minister Ariel Henry faces increased scrutiny from authorities investigating the president’s slaying, with one top official resigning as he accused Henry of obstructing justice in a sharply worded letter
Read more

Demonstrators have been marching against lockdowns and mandatory vaccines in Australia's second largest city.
Read more

Asian stocks sink as investors watch for US jobs...

Asian stock markets are mixed after Wall Street rose to a high as investors wait for U.S. jobs data for an update on how coronavirus flareups are affecting the biggest global economy
Read more

"Ultimately, it will be the president's decision how this proceeds, no one else's," White House national security adviser Jake Sullivan said.
Read more

Since becoming head coach of the Lions, Dan Campbell has been a consistent headline.
Read more

Sen. Joe Manchin opened the door to a legislative compromise on voting legislation on Wednesday, with a memo proposing a slew of changes to Democrats' bills.
Read more

19-year-old attempts to become youngest woman to fly around...

19-year-old Zara Rutherford is on a mission to become the youngest woman to fly around the world solo. Her goal is not just to break records, but to break barriers in the male-dominated aviation industry. Ian Lee has more.
Read more

Roughly 60,000 film and TV production crew workers will go on strike Monday if they do not secure a new contract with Hollywood and streaming giants. International Alliance of Theatrical Stage Em...
Read more

Laurence Llewelyn-Bowen and his leather trousers usher the home makeover show back after 17 years.
Read more

Sheriff finds “no link” between Gabby Petito case and...

The New York woman was on a cross-country trip with her fiancé, Brian Laundrie, when he returned home without her.
Read more

Dog theft: Simple tips to stop your puppy being...

With dog thefts on the rise, here are some tips on how you can keep your dog as safe as possible.
Read more

5 feared dead in Fiji after reports of violence...

The most political garden in America is still sowing...

Since leaving Washington last January, there have been only a handful of things that have drawn former first lady Melania Trump out of her social media silence: holidays, the anniversary of Be Best, thanks for birthday wishes.
Read more

France and Germany ‘seeking full clarity’ from US and...

CDC estimates Alpha variant made up 66 percent of...

The Centers of Disease Control and Prevention (CDC) estimated in a study released Thursday that the Alpha variant made up about 66 percent of COVID-19 infections in the U.S. in mid-April. The study highlights how quickly a new variant can...
Read more

Magic’s Robin Lopez jokes he’ll do his ‘own research’...

While NBA’s media day was a bit tense in some pockets of the basketball world, Orlando Magic center Robin Lopez joked Monday he wasn’t sure whether the Milwaukee Bucks won the title last season.
Read more

G20 signs off on tax crackdown, warns on virus...

Finance chiefs of the G20 large economies endorsed a landmark move to stop multinationals shifting profits to low-tax havens at talks on Saturday where they will also warn that coronavirus variants threaten the global economic recovery.
Read more

The world's biggest carmaker will cut output in September and VW warns it may have to make further cuts.
Read more

Some Missouri hospitals bracing for another COVID surge

Health experts are warning that the oncoming surge fueled by the Delta variant will be worse than previous ones. Kansas City has reported its highest positivity rate of COVID cases since the pandemic began. Mireya Villarreal takes a look.
Read more

Searchers worked early on Sunday to find more than 150 missing residents amid the rubble of a Florida condo building that collapsed three days ago as questions arose about the tower's structural integrity.
Read more

The divorce between Bill Gates and Melinda French Gates was finalized on Monday, ...
Read more

A police dog handler has described the moment his dog Bear discovered the 49-year-old's body in woodland.
Read more

The £20-a-week boost - brought in to help with Covid - will be adjusted from this autumn, a minister says.
Read more

A lack of truck drivers is partially behind lengthy delivery delays in the U.S., and the industry expects a shortage of 100,000 drivers by 2023, when the startup Aurora plans to have autonomous trucks begin driving FedEx packages. Transportation correspondent…
Read more

The family of the Chicago police officer seriously wounded in the fatal shooting of Officer Ella French earlier this month released a heartbreaking video from his hospital bed Wednesday night.
Read more

Five weeks before the start of the Olympics in Rio, a mutilated body washed up on Copacabana beach that will host beach volleyball events. The horrific discovery comes as Olympic organizers deal with a raft of problems including severe pollution in water spor…
Read more

In Syria camp, forgotten children are molded by IS...

It has been more than two years that some 27,000 children have been left to languish at al-Hol camp in northeast Syria, housing families of Islamic State militants
Read more

Progress in vaccinating the world against COVID-19 means the world's economic recovery and demand for oil will outpace the output of top producers, the International Energy Agency (IEA) said on Wednesday
Read more

Biden and Trudeau profess a great friendship, but these nine key issues won’t be solved by smiles.
Read more

Stock Bull Run Rolls On With JPMorgan Doubling Down...

It’s all very simple. The economy isn’t strong enough for the Federal Reserve to taper stimulus, therefore stay-at-home tech shares will rally. And any efforts to heal the economy are likely to drive up inflation, meaning banks and airlines will benefit.
Read more

Speaker Nancy Pelosi (D-Calif.) took a jab at Republicans on Wednesday over COVID-19 vaccinations, arguing the GOP has been "delinquent" in embracing the science of vacc...
Read more

Public health experts are growing increasingly concerned about a rise in anti-vaccination rhetoric among elected officials and right-wing media as a new wave of coronavirus infections begins to wash over Americans who hav...
Read more

President Biden on Thursday said he is directing his administration to look into ways to protect abortion access for women in Texas after the Supreme Court ...
Read more

Bannon says he discussed how to ‘kill this administration...

A Brazilian healthcare provider is accused of conducting trials on Covid-19 patients without consent.
Read more

Aston Villa manager Dean Smith says it was an "ugly game" as his side conceded a late equaliser against Newcastle in a largely dull encounter at St James' Park.
Read more

The grand experiment is over and the metropolis has no one to blame but itself. The post Farewell, New York City appeared first on The American Conservative.
Read more

Algeria is one of several Mediterranean countries to face devastating wildfires.
Read more

Republicans consider dividing up Nashville district to gain US...

Rep. Jim Cooper has represented Nashville in the House for nearly 20 years, and a nearby district before that for another dozen, serving in Congress longer than anyone else in Tennessee. In the deep red state, he and his brother John -- Music City's mayor -- …
Read more

Arsenal come from 3-0 down to rescue point in thriller with West...