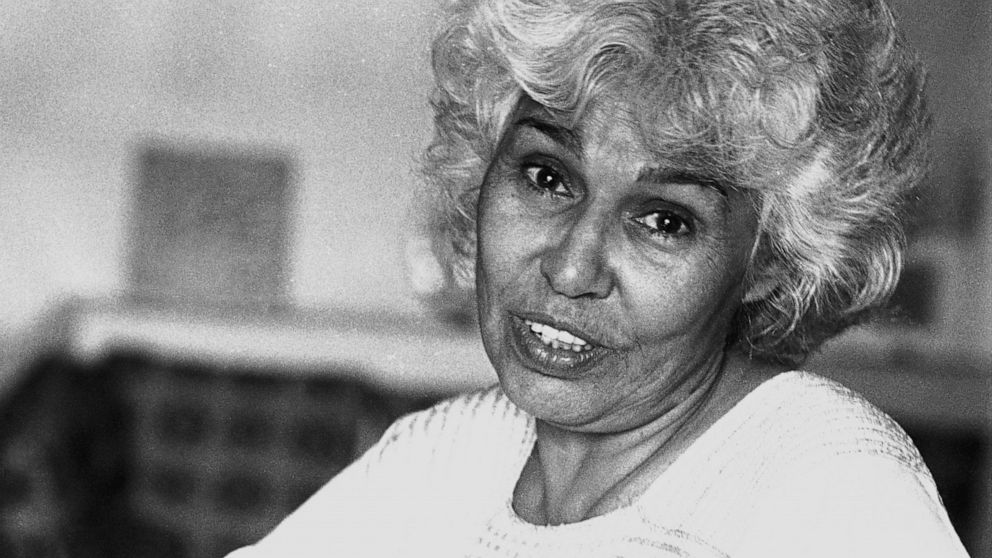 CAIRO — Nawal Saadawi, a renowned Egyptian feminist, psychiatrist and novelist, whose writings have stirred controversy for decades in an overwhelming conservative society, died of age-related health problems in Cairo on Sunday, officials said. She was 89.

Born in October 1931 in a Nile Delta village, Saadawi studied medicine in Cairo University. She worked as a psychiatrist and university lecturer and authored dozens of books. She was also a regular writer in Egyptian newspapers.

As a fierce advocate of women rights in Egypt and the Arab world, her writings focused mainly on feminism, domestic violence against women and religious extremism. She was a vocal opponent of female genital mutilation in Egypt and worldwide.

When she published her famous book, Women and Sex in 1972, she faced a storm of criticism and condemnation from Egypt’s political and religious establishment. She also lost lost her job at the Health Ministry.

She was detained and jailed for two months in 1981 as part of a wide political crackdown waged by then-President Anwar Sadat. While in jail, Saadawi wrote down her experience in a book entitled: Memoirs from the Womens Prison, using a roll of toilet paper and a cosmetic pencil.

In 2005, She was awarded the Inana International Prize in Belgium, a year after she received the North-South prize from the Council of Europe. In 2020, Time Magazine named her on their 100 Women of the Year list.

Because of her views, Saadawi faced several legal challenges, including accusations of apostasy from Islamists.

Saadawi was married three times, and is survived by two daughters. Sinema rakes in Pharma and finance cash amid reconciliation negotiations

Chris Eubank Jr says the cancellation of his fight is "surreal" after it was called off due to medical concerns for his opponent Anatoli Muratov.
Read more

The coal-supporting nation has faced increasing pressure to commit to a net-zero emissions target.
Read more

The following is a transcript of an interview with Senator Bernie Sanders that aired Sunday, May 23, 2021, on "Face the Nation."
Read more

Things are heating up on "Love Island U.K." as the show crosses the halfway mark. This week, the villa was home to betrayals, broken hearts and sports day.
Read more

Black veteran celebrates the US: ‘You’re not born into...

A Black combat veteran celebrated the United States and the opportunities it gives to people in a Fox News Independence Day special, calling America "the best place on the planet" for others like him who choose to pursue opportunity.
Read more

An almost completely transparent “glass octopus” was sighted in the middle of the Pacific Ocean last month by marine scientists on the Schmidt Ocean Institute’s research vessel Falkor.
Read more

Police negotiators on scene at hotel after reports of...

A man with a firearm has barricaded himself into a Honolulu hotel room following reports of multiple shots being fired as police negotiators have arrived on the scene.
Read more

Covid 19: More than one third of Londoners unvaccinated

Although the city has administered nine million jabs, its young population means many are unvaccinated.
Read more

Fully vaccinated head coaches no longer have to wear...

The National Basketball Association will no longer require head coaches who are fully vaccinated against Covid-19 to wear masks during games, according to a memo obtained by CNN.
Read more

This week the company announced it would shut down Fleets with an extremely apt tweet.
Read more

Former President Trump said it is an "easy question" whether he'll run for office again, while declining to share his decision on launching a 2024 presidential bid."Actually, for me, it's an easy...
Read more

Singapore has warned it may need to reimpose Covid-19 restrictions if a new outbreak of the highly infectious Delta variant is not contained, putting at risk the city's shift towards living with the virus.
Read more

Police responded to a near blast from the past in Maryland after a resident found a live Civil War-era cannonball.
Read more

Brandon Pettit case: Do words make you a murderer?

A son is accused of having his parents killed, but his sister says there's no physical evidence directly tying him to the crime — only words.
Read more

Want to run Windows 11 on the Steam Deck? That shouldn’t be a problem (with any luck).
Read more

Here’s how Disney Plus movie releases will work as...

Disney CEO Bob Chapek has hinted at the future of the studio’s theatrical releases.
Read more

Indian shares were subdued early on Monday as gains in Reliance Industries were offset by weakness in IT stocks after Tata Consultancy Services reported September-quarter results.
Read more

Northern Superchargers rack up 200 in an incredible 69-run win over Manchester Originals as the visitors wilt at a raucous Headingley.
Read more

Lady Gaga Is Back In Center Frame In Gorgeous...

Lady Gaga is returning to the screen in a new true crime film. She will appear in Ridley Scott’s House of Gucci, starring as the notorious Patrizia Reggiani, who was convicted of killing her ex-husband Maurizio Gucci in an infamous court trial back in 1998. A…
Read more

The investigation found that the governor engaged in inappropriate touching and comments.
Read more

Starfield could come to Xbox Series X this year

Bethesda’s elusive space RPG Starfield could see a release as early as 2021, according to a reporter with a strong track record on leaks.
Read more

The 58-year-old is described as a "predatory paedophile" by a judge, who also praised Albert Bremner's victims.
Read more

President Biden reportedly proposed a new, minimum corporate tax of 15 percent to fund his infrastructure plan during a private meeting Wednesday, marking a reversal from his earlier effort to raise the corporate tax rate...
Read more

Algerians are clamouring for democratic reforms and the weakening the influence of the military.
Read more

Study reveals why some people get Covid toe condition

Scientists have investigated how the chilblain-like lesions arise in some people who catch Covid.
Read more

President Biden will deliver remarks next week on voting rights in Pennsylvania, the White House said Friday, weeks after the president first pledged he would go on the road to discuss the need to strengthen and protect b...
Read more

Chinese vendor surprises us with a new version of its award winning laptop.
Read more

The thwarted attempt to kill President Andry Rajoelina is the latest turmoil to strike the island nation.
Read more

PUBG Corp goes on a hiring spree in India...

PUBG Mobile India might actually be close to release as Krafton is looking to hire across multiple roles in Bangalore.
Read more

Missed the second half of the show? The latest on Afghanistan, Hurricane Ida, Coronavirus vaccination mandates.
Read more

New Japan PM Kishida off to rocky start in...

Japan's new Prime Minister, Fumio Kishida, is struggling to find his footing with voters just two days after he was voted into office and launched his new government, multiple polls by local media showed on Tuesday.
Read more

The first minister has defended the system of appeals for pupil assessments.
Read more

Ingram attacked Los Angles with slashing drives, pull-up jumpers and three 3-pointers, including one while fouled for a 4-point play.
Read more

Magic Unfolds Behind the Scenes of the ‘Disney Fab...

Over the past several weeks, I’ve had the privilege of being part of the team working with a wide range of Disney cast members, Legends and celebrities to playfully reveal 50 beloved characters that, beginning Oct. 1 and throughout "The World’s Most Magical C…
Read more

Sen. Joe Manchin (D-W.Va.) is keeping his colleagues guessing on whether he will back a sweeping election bill during a high-profile vote next week.
Read more

Windows 11 could bring back desktop widgets in a...

Are we heading back to the days of Windows Vista? Maybe, kind of, at some point down the line…
Read more

Erika Jayne fires back after being slammed for sharing...

The “Real Housewives of Beverly Hills” star, 50, took to her Instagram Stories on Thursday to respond to a fan’s post about attorney Ronald Richards, who is the point man in the ongoing liquidation of Girardi’s shuttered law firm.
Read more

Want to invest in crypto? There’s a consultant for...

Great Yarmouth: ‘This town got stuck in time but...

Great Yarmouth is turning its fortunes round with an increase in visitors and several big projects.
Read more

The Florida Republican, 38, says he and his family are victims of an extortion scheme.
Read more

In her first detailed TV interview, the socialite admits accidentally shooting police superintendent Henry Jemmott on a moonlit pier in Belize. His family, however, believes Hartin murdered him.
Read more

St Helens come from behind to beat Castleford at Wembley and win the Challenge Cup for the first time in 13 years.
Read more

The 18-year-old woman was taken to hospital after the incident in Elgin in the early hours of Sunday.
Read more

Don’t Get NFTs? Don’t Worry, Neither Do Most Americans

A new poll shows most people don’t understand non-fungible tokens and don’t value them all that highly.
Read more

Activity outside of home hits highest point since pandemic...

More Americans are engaging in activities outside the home than at any point since the start of the COVID-19 pandemic, according to a poll released Tuesday.The ...
Read more

A Category 3 or 4 by sunrise is not out of the question as Ida roars toward the Louisiana-Mississippi coasts, only to make landfall on Katrina's 16th anniversary Sunday.
Read more

Parkrun resumption delayed after fewer than half of venues...

Parkrun will not resume on 5 June after fewer than half of its venues approve the return of the 5km runs.
Read more

The European Medicines Agency has concluded that a booster dose of the BioNTech/Pfizer and Moderna coronavirus vaccines "may be given to people with severely weakened immune systems, at least 28 days after their second dose," according to a statement Monday.
Read more

Charles “Chuck” Geschke, founder of Adobe and developer of...

“This is a huge loss for the entire Adobe community and the technology industry," Adobe CEO Shantanu Narayen wrote in an email to the company's employees.
Read more

Fauci says this is a pause and not a...

Dr. Anthony Fauci, the nation's top infectious disease expert, says the recommended pause on the Johnson & Johnson Covid-19 vaccine is just that: a pause -- and not a cancellation -- and will likely last days to weeks.
Read more

The White House on Monday lifted the 14-person pandemic limit on the number of reporters allowed in the James S. Brady Press Briefing Room, increasing the number to 24, half its full capacity....
Read more

Michelle Obama: Girls ‘all give me hope’

Speaking to girls from London schools, the former US first lady had inspiring messages to share.
Read more

Relatives of 16 Nicaraguan opposition figures jailed in recent weeks are demanding that President Daniel Ortega’s government let them see their loved ones, know where they are and how they are doing
Read more

“CBS This Morning” preview: Thursday, May 7

Apple is seeking to protect its image as a guardian of personal privacy, maintaining it was blindsided and handcuffed by a Trump administration probe that resulted in the company handing over phone data from two Democratic congressmen
Read more

Has Tucker Deposed Trump as the Troller in Chief?

Microsoft to disable old-school macros to shield users from...

Microsoft will disable XLM macros in Microsoft 365 to prevent users from falling victim to attacks that leverage this legacy feature.
Read more

Corporate profits running into a wall