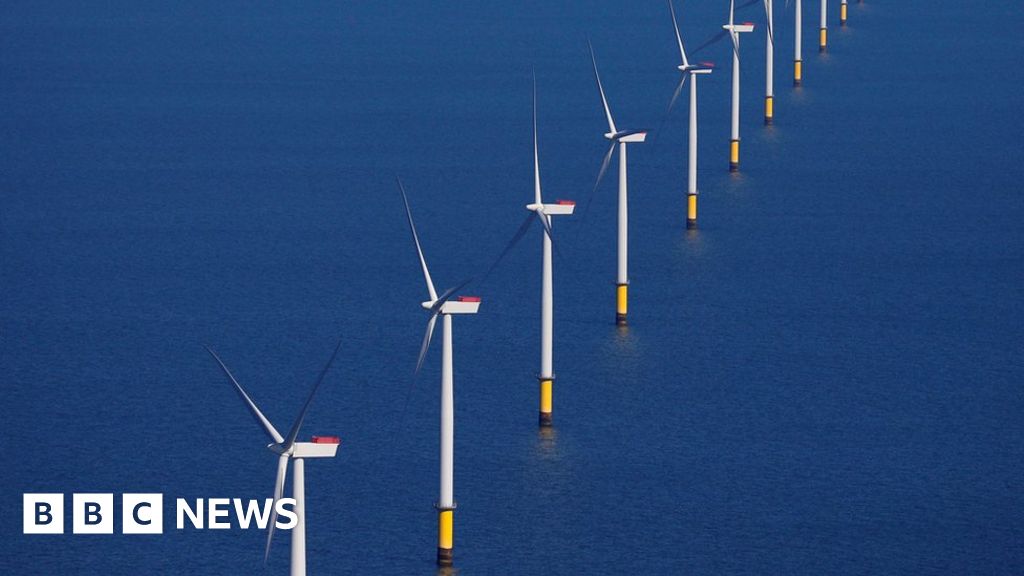 The Liberal Democrats want the government to use profits from green infrastructure projects to create a new fund for climate action and green jobs.

He said the government raised £9bn last month from auctions to build wind farms on the coasts of England and Wales.

Sir Ed wants money from projects like this to be invested “to grow our green wealth even further” in the UK.

The party leader told the conference: “This green wealth doesn’t belong to Rishi Sunak, or the Tories. It belongs to the British people.

“So I say, let’s invest it in a sovereign green wealth fund. Let’s invest this windfall from wind power into more climate action, to build new infrastructure and attract more private investment.”

He said by using the money to invest in green technologies – such as tidal power and hydrogen – the UK could “grow our green wealth even further” and create “thousands of manufacturing jobs”.

The Lib Dems also proposed a new tax break for small businesses to support new jobs as part of the Covid economic recovery.

Sir Ed called on the chancellor to slash National Insurance contributions for smaller firms by quadrupling the annual Employment Allowance from £4,000 to £16,000 .

Employers would not have to pay any National Insurance for their first five employees, he said.

He called it a “tax cut to back small businesses, create jobs, and put recovery first”.

Trump urges Herschel Walker to run for Senate in...

Former President Trump is urging retired NFL star Herschel Walker to run against Sen. Raphael Warnock (D) in Georgia, touting a close ally in a crucial midterm election."Wouldn't it be fantastic if the legendary He...
Read more

Visits will be permitted to occur even if there are outbreaks in facilities, so long as they are contained to "a single unit or separate area of the facility," the guidance says.
Read more

The White House is currently in the process of reviewing clemency applications and has signaled that President Joe Biden, who views the pardon power as a key tool for advancing equity, will issue acts of clemency before the middle of his presidential term, a …
Read more

Back to school deals at Dell: get the XPS...

Score epic deals at the Dell back to school sale like the XPS 13 laptop, which is on sale for just $699.99.
Read more

North Korean leader Kim Jong Un has presided over a meeting of the ruling party in his first public appearance in about a month, and called for a larger political conference to discuss efforts to salvage a decaying economy
Read more

Inside the lives of Asian massage workers: ‘How can...

Asian female massage workers in the US speak up about the stigma surrounding their profession.
Read more

Covid in Scotland: Can we stop worrying about high...

As vaccination reduces serious illness from Covid-19, the Scottish government is changing its strategy.
Read more

Heat come up short at home against rolling Suns

The Miami Heat come up short at home against the rolling Phoenix Suns.
Read more

White House officials have apparently rehung portraits of former Presidents George W. Bush and Bill Clinton in a prominent location after President Trump's staff broke tradition by moving them away from areas typically us...
Read more

The president's phone number was found on a list of numbers that were potential phone hacking targets.
Read more

Biden meets with general who stepped down as commander...

President Biden on Wednesday will meet with the U.S. general who until recently was the top commander in Afghanistan, as the U.S. withdrawal from America's longest war comes to a close.
Read more

Brady Mistic says he "held his open and empty hands up in an obvious effort to show he meant no harm" – but the officers ignored him and tackled him.
Read more

What are your resolutions for 2017? Journalist Jennifer Wallace has some tips to help you achieve them.
Read more

Sony’s latest speakers will change the way you listen...

Russian cosmonauts have reported 'superficial fissures' on one of the modules of the International Space Station.
Read more

Don’t break the bank in the name of a sale. We found a bunch of budget-friendly discounts on Amazon.
Read more

The awning outside of a Las Vegas supermarket collapsed Friday morning, injuring four people and sending more than a dozen running out the back door, according to authorities.
Read more

Federal officials faced a grilling from lawmakers on Tuesday over how the Biden a...
Read more

As rescue crews continue to search for survivors in Thursday's partial collapse of a Surfside, Florida condo building, officials are considering whether a neighboring apartment building should be temporarily evacuated.
Read more

Protesters burned mock coffins and pictures of Myanmar's army ruler Min Aung Hlaing on Saturday in the latest demonstrations against the coup over five months ago that has plunged the Southeast Asian country into chaos.
Read more

Asian shares are higher as investors interpreted comments from the head of the U.S. Federal Reserve as signaling low interest rates were here to stay for some time
Read more

Liberals get ready to grab wheel of Dem agenda

The Congressional Progressive Caucus' chief says more than half her 96-member group is willing to block the Senate-passed infrastructure bill later this month without a separate party-line measure.
Read more

Interview: How one developer created iOS 4 in an...

We talked to developer Zane Kleinberg about OldOS and his plans for it going forward, including an iPad version.
Read more

Former Boston Red Sox star Pedro Martinez famously got into an incident with Don Zimmer when he was the New York Yankees bench coach for manager Joe Torre during the 2003 season.
Read more

Political parties have begun a frantic day of campaigning on the last day before Thursday's polls.
Read more

"It's not like I'm in a secluded area," said a woman who recorded the animal in action.
Read more

The Royal College of Nursing says its annual meeting in Liverpool will be replaced by virtual events.
Read more

Swansea City miss the chance to move into the automatic promotion places in the Championship as they are held 1-1 by Blackburn at Ewood Park.
Read more

Attorneys for the family of a Black man shot and killed by deputies in North Carolina say an independent autopsy shows that he was shot five times, including a shot in the back of the head
Read more

This house was in a serious fire. Now it’s...

A house outside of Boston, MA was involved in a fire, and then placed on the market before it was repaired. It's now selling for just under $400k.
Read more

Prime Day deals over $100 that are actually worth...

Some things are worth the money, including the best deals this Prime Day on items over $100.
Read more

President Joe Biden scored a political win by sealing a $579 billion infrastructure deal with a group of Democratic and Republican senators, yet the bipartisan plan faces hurdles in Congress that reflect challenges to his broader economic agenda.
Read more

Johnson to give up seat at Prince Philip’s funeral...

U.K Prime Minister Boris Johnson will not attend Prince Philip’s funeral, instead giving up his place for a royal family member.Just 30 people will be allowed to attend Philip’s funeral next Saturday amid the ongoing coronavirus pandemic.A...
Read more

Most parents oppose COVID-19 vaccination mandates at schools, but a majority back requirements for unvaccinated students and staff to wear masks at schools, according to a Kaiser Family Foundation (KFF) poll.The KFF COVID-19 Vaccine Monitor ...
Read more

Black-owned farms in the U.S. are disappearing fast

"I think discrimination is still pervasive. I think that it's done in a much subtler way," one Black farmer said.
Read more

Putin at summit with Biden objected to US plan...

A new poll found that about seven in 10 parents are concerned that their children will face setbacks in schools, academically and socially, due to the coronavirus pandemic that caused many schools to switch to online learning for months.
Read more

Alphabet's self-driving car unit Waymo is claiming that its artificial intelligence could have avoided or mitigated the majority of a set of fatal accidents.In a white paper published Monday, the company simulated...
Read more

Shangela spoke to Newsweek about working with a new group of "inspiring" individuals on the second season of "We're Here," with Bob the Drag Queen and Eureka.
Read more

What options does the U.S. have to thwart ISIS?

Nikki Haley tests the Iowa waters while the base...

Nikki Haley took top billing at the Republican Party of Iowa's Lincoln Day dinner Thursday night, decrying what she called Democrats' "socialist" agenda and calling for a boycott of the 2022 Beijing Winter Olympics as she became the latest potential 2024 cont…
Read more

Vice President Harris met with South Korean President Moon Jae-in Friday, without the participation of President Biden, and then the two appeared together to make a statement. A bilateral meeting at the White House between a U.S. vice president and a visiting…
Read more

Cuomo Accuser Speaks Out for First Time as Sheriff...

The woman who filed a criminal complaint against New York Governor Andrew Cuomo spoke out publicly for the first time, calling for him to be held “accountable.”
Read more

Delta Air Lines Inc. is looking for employees to take shifts cleaning tables and restocking the buffet at Atlanta airport loyalty lounges after its normal contractor for the jobs couldn’t come up with enough workers.
Read more

The PS5 restock you've been waiting for is here, and it's directly from Sony. Here's how to buy the PS5 today.
Read more

iPhone apps on iPadOS 15 will finally get this...

iPadOS 15 enables iPhone apps to be viewed in landscape, rather than portrait.
Read more

Man says he killed kids over QAnon theories and...

Santa Barbara surfing school owner told the FBI he took them to Mexico, believing they'd become monsters, and shot them in their chests with a spear gun, authorities say.
Read more

Pandemic helped cause biggest drop in US life expectancy...

The company responsible apologized and stressed that there's no danger to recipients.
Read more

Dylann Roof, convicted of killing nine people in the 2015 attack on a South Carolina church, told a judge that he doesn't want to sit through all the testimony in the sentencing phase of his trial. CBS News correspondent Mark Strassmann joins CBSN from Charle…
Read more

Chu on Atlanta shootings: 'This is an anti-Asian hate crime'