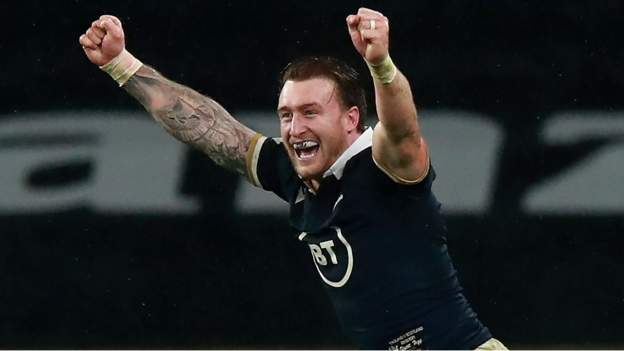 Scotland’s Premiership players will be available for Friday’s match with France, Six Nations organisers have confirmed.

The game in Paris was scheduled for February but was postponed after a Covid-19 outbreak in the France camp.

The rearranged date of 26 March falls outside an international window.

Captain Stuart Hogg and full-back Sean Maitland were among the England-based players in Scotland’s side for Saturday’s 52-10 win over Italy.

Hogg and international team-mate Jonny Gray are at Exeter, Maitland and Duncan Taylor play for Saracens and Gloucester’s Chris Harris was a replacement against the Italians at Murrayfield.

Fly-half Finn Russell plays his club rugby in France with Racing 92 but was injured for the visit of Italy.

“Six Nations Rugby are pleased to confirm that an agreement has been reached with Premiership Rugby for the release of Scottish players for the final rescheduled fixture of the 2021 Guinness Six Nations Championship, France v Scotland,” a statement read.

“Six Nations and Scottish Rugby would like to take this opportunity to thank all PRL club owners for their understanding and co-operation in these exceptional Covid affected circumstances.” Johnson & Johnson (J&J) has settled an opioid lawsuit with the state of New York for $230 million days before the company was to be put on trial.New York Attorney General Letitia James (D...
Read more

The brave, fallen ‘stars’ that brought me to Afghanistan

The Khost officers were representative of the 9/11 generation of CIA -- women and men of varied ethnicities, ages, backgrounds and political persuasions who united to take part in the great war of our time, writes Matt Castelli.
Read more

People are believed to have died after two lorries and several cars crashed on the A1 (M), police say.
Read more

‘The problem remains with the unvaccinated,’ one expert says...

With the spread of the more transmissible Delta variant continuing nationwide, the recent surge in Covid-19 cases is being largely driven by swaths of people that remain unvaccinated, according to one expert.
Read more

Racial justice and internet accountability advocacy groups launched a campaign Tuesday pressuring Facebook to take action to combat what they called a crisis of Spanish-language disinformation on the social media pl...
Read more

French President Emmanuel Macron offered on Saturday to reset relations with Britain as long as Prime Minister Boris Johnson stood by the Brexit divorce deal he signed with the European Union.
Read more

A Facebook executive will testify in front of the Senate after reports from The Wall Street Journal showed the social media giant downplayed the toxic impact its Instagram platform has on teenage girls.
Read more

Few of the pre-match predictions came to pass but the goal that won Rangers the Old Firm derby would be wearily familar to Celtic, writes Tom English.
Read more

China appealed a World Trade Organization dispute ruling that rejected the nations claims against the U.S. relating to safeguard measures that the Trump...
Read more

Saudi Arabia says this year’s hajj pilgrimage will be limited to no more than 60,000 people, all of them from within the kingdom, due to the ongoing coronavirus pandemic
Read more

Man in Mallorca charged with infecting 22 people with...

A 40-year-old Spanish man was arrested for intentionally causing injury after allegedly infecting 22 people with COVID-19, according to reports.
Read more

Sullivan: U.S. will not be issuing ‘threats or ultimatums’...

National Security Advisor Jake Sullivan said on Sunday that the U.S. would not be issuing "threats or ultimatums" to China as it seeks access for an investigation into the origins of the COVID-19 pandemic.Appearing...
Read more

European Central Bank President Christine Lagarde said her institution will probably adopt a mix of home- and office-based working after the pandemic, acknowledging that the crisis has shown how much can be done remotely.
Read more

Presented by Facebook THE BUZZ: The state Legislature passed a budget yesterday. Now lawmakers will work to strike a budget deal. If that sentence fell...
Read more

An influential data guru expounds on why he thinks his party is losing ground: Their reserve army of young, upscale liberals keeps stepping on their message.
Read more

A breastfeeding mother has her request to be excused from jury service declined.
Read more

Call of Duty: Warzone is getting an ‘extremely cool’...

Call of Duty: Warzone is set to receive a new map that will take players to the Pacific, and is inspired by the World War II setting of Call of Duty: Vanguard.
Read more

Democrats start bargaining in bid to save party-line megabill

Without an agreement between progressives, the White House and Sens. Joe Manchin and Kyrsten Sinema, the party's entire domestic agenda is in limbo.
Read more

France on Thursday accused President Biden of making an "unpredictable decision" like President Trump "used to do" after he scrapped a $40 billion submarine defense deal that the European nation had signed with Australia,...
Read more

DJI Mini SE finally lands in the US, but...

The long-awaited DJI Mini SE has now launched in the US, but most buyers should still go for its superior sibling.
Read more

The payment marks the end of a long-running legal battle over a spill during the 1967-70 Biafran War.
Read more

The state broadcaster says some regions have seen over 50cm (20in) of rain in three days.
Read more

On his first overseas trip, President Trump preparing to visit Israel after his stop in Saudi Arabia. Washington correspondent for Haaretz Amir Tibon joins CBSN from Tel Aviv to discuss what to expect.
Read more

The party puts forward a legal change that, if approved, could see the MP facing a recall petition.
Read more

Good morning and welcome to Fox News First. Here's what you need to know as you start your day Deadly shooting at Kabul airports...
Read more

Paul LePage Is Back. And Maine Is Terrified.

On the front lines, both parties are anxious about the storm that’s coming.
Read more

Nevada Gov. Steve Sisolak (D) on Saturday signed a law that bans "non-functional" grass in an effort to combat the effects of a drought that is threatening one of the state's primary sources of water: the Colorado R...
Read more

China criticizes US for abandoning Afghanistan, warns against ‘shirking...

Chinese foreign minister Wang Webin criticized the U.S. withdrawal from Afghanistan during a joint meeting with the Shanghai Cooperation Organization (SCO) and called on the Eurasian alliance to “prevent the United States from shirking its responsibility.”
Read more

A wide-ranging pro-Chinese influence group is attempting to use social media platforms and other forums to mobilize physical protests around COVID-19 concerns in the United States, research released Wednesday found.Cybersecurity group...
Read more

The 51-year-old has led a city marred by multiple crises, including the pandemic, monthslong protests and a spike in violent crime.
Read more

Son murdered mum and lived with body for two...

Dale Morgan is sentenced to life imprisonment for murdering Judith Rhead in a house in Pembroke Dock.
Read more

Presented by Ørsted Good Wednesday morning! From The New York Times we learn that federal agents raided a massive Hindu temple in Robbinsville of the...
Read more

Sen. Raphael Warnock, D-Ga., recently said he has "never been opposed" to voter ID as Senate Democrats push their election bill S.1 — even though many of his past comments are the exact opposite.
Read more

Lincoln will introduce its first all-electric model in 2022. Four battery-powered vehicles will be added to the lineup by 2030.
Read more

Suspect in custody after bomb threat on Capitol Hill

The suspect in a bomb threat investigation on Capitol Hill, Floyd Ray Roseberry, has surrendered after a nearly six-hour-long standoff with law enforcement. CBS News congressional correspondent Nikole Killion reports on the latest, and then Kathy Guider, a re…
Read more

‘Holyrood should be a mirror – it’s not’

The women of colour hoping to break the mould of the Scottish parliament's 22-year-history.
Read more

Shafali Verma, the top-ranked Twenty20 batter in the world, is called up to the India Test and one-day squad for the tour of England.
Read more

MLAs to debate ban on appointing those with serious...

AWS is making it simple to use the same...

A $35 Billion Plan for Korean Battery Giants to...

South Korea plans to invest 40.6 trillion won ($35 billion) in its electric-vehicle battery industry by the end of the decade to secure its spot as a major global force in the sector and compete with a dominant China and Japan.
Read more

Hong Kong tightened its travel curbs for residents returning from 16 countries -- including the U.S., France and Spain -- less than two months after it started easing some of the world’s strictest quarantine measures.
Read more

Buying a great laptop doesn't have to be expensive – there's loads of fantastic devices out there for less than £400.
Read more

Toyota is reporting a record 897.8 billion yen, or $8.2 billion, profit for the fiscal first quarter, underlining the Japanese automaker’s resilience even amid the coronavirus pandemic
Read more

Seven people involved with terror groups active in Italy in the 1970s and 1980s are detained.
Read more

Brazil to host Copa America after Argentina is stripped

Brazil will host Copa America for the second consecutive time after Colombia and Argentina were stripped of hosting rights for the tournament, prompting local health experts to criticize the decision to hold the troubled event in one of the countries hardest …
Read more

Biden to withdraw all U.S. troops from Afghanistan by...

The move will likely prompt the Taliban to renew attacks on American forces there, which have largely halted since the February 2020 agreement.
Read more

Woman Finds Iconic Dress From ‘How to Lose a...

World number one Barty stunned in Olympics first round

World number one Ashleigh Barty is stunned by Sara Sorribes Tormo of Spain in the first round of women's Olympics singles in Tokyo.
Read more

Sleeper, a fantasy sports startup, has more than quadrupled its valuation to $400 million after raising $40 million in a round led by Andreessen Horowitz.
Read more

A fiery crash in Phoenix on Wednesday night involving a tanker truck left at least four people dead sent nine others to hospitals, according to a report.
Read more

Pfizer and BioNTech on Friday said that they have begun their request for the Food and Drug Administration (FDA) to give full approval of its COVID-19 vaccine after having emergency use authorization for almost five...
Read more

The Dominion voting systems company is suing a pair of far-right media companies and the former head of Overstock.com for defamation based on statements made about the 2020 election.In separate lawsuits filed this...
Read more

Democrats are facing looming challenges as they plot their next legislative step, threatening to cut short a victory lap over the relief bill.The days-long debate on the $1.9 trillion package pro...
Read more

A 90-year old woman died in Sydney, as state officials warn of a surge in new infections.
Read more

Harris seeks her own unique path at White House