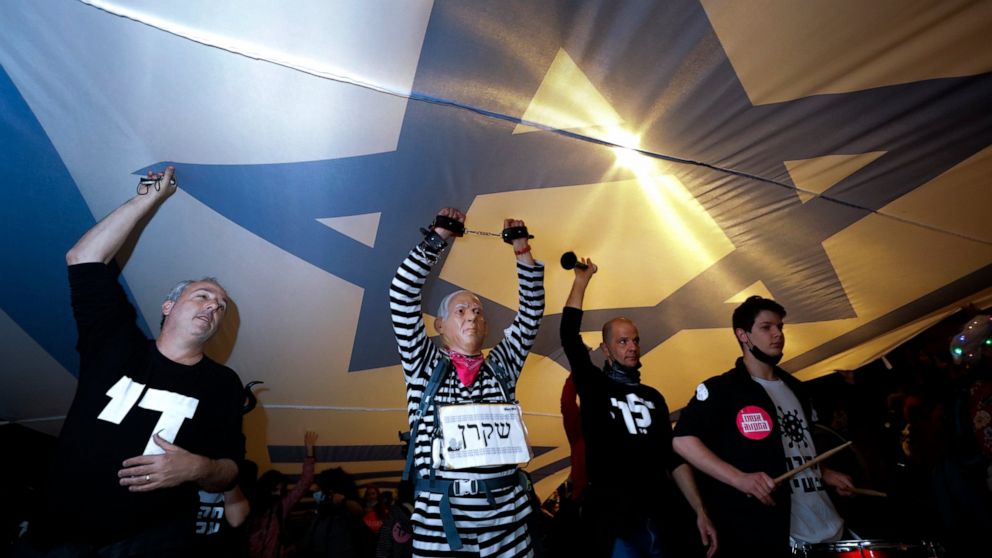 JERUSALEM — Thousands of Israelis demonstrated outside the official residence of Prime Minister Benjamin Netanyahu on Saturday night, calling for the longtime prime minister’s ouster in a final show of force ahead of this weeks parliamentary elections.

The weekly protests against Netanyahu have taken place for nine months. But they have lost strength in recent months in part due to cold winter weather and after early elections were declared in December. Saturday’s night’s gathering in central Jerusalem was the largest protest in months.

The grassroots protest movement believes Netanyahu cannot serve as prime minister while he is on trial for multiple corruption charges. Many also object to his handling of the coronavirus crisis.

Netanyahu is counting on his highly successful vaccination campaign to propel him to victory. Some three-quarters of the countrys adult population has been vaccinated in under three months, and the economy has reopened in recent weeks. But over 6,000 Israelis have died from COVID-19, the economy has been hard hit by repeated lockdowns, and unemployment remains in double digits. Many of the protesters have lost their jobs or seen their businesses suffer due to repeated lockdowns.

Its in our hands, read a sign on a giant Israeli flag. We are saving the country. We are fighting corruption, we are the hope, said another banner.

Opinion polls have forecast a tight race on Tuesday, with Netanyahu and his religious and nationalist allies struggling to secure a majority of seats in the 120-member Knesset, or parliament.

If the polls are correct, Israel could be facing weeks of horse-trading and even the possibility of an unprecedented fifth consecutive election in just over two years. Baldwin was told gun was ‘cold’ before movie set shooting

The Admirals Who Killed the West

Experts say COVID-19 is crimping the economic recovery, while inflation is likely to stay high through year-end.
Read more

The New York state attorney general has received a referral to open an investigation into Gov. Andrew Cuomo's (D) possible use of state resources for his recent pandemic memoir, allegations that come as the embattle...
Read more

Othal Wallace, the suspect in a manhunt that ended Friday morning after a Daytona, Florida, police officer was shot in the head while on duty Wednesday, is garnering support on social media.
Read more

The U.K. reported the most new coronavirus infections since the end of February, fueling rising concern that the resurgent pandemic could delay plans to ease restrictions.
Read more

Turkish President Recep Tayyip Erdogan is paying a two-day visit to Azerbaijan and, alongside his Azerbaijani counterpart Ilham Aliyev, has traveled to the city of Shusha that Azerbaijan recaptured from Armenian forces in last autumn’s war
Read more

Booster Debate Comes Down to Pivotal Meeting of FDA...

Nick Dietz compiles some of the latest and greatest viral videos, including a stubborn, box-loving English Bulldog and a pet raccoon that will wash anything it gets its paws on. To see these videos in t…
Read more

Thailand has tightened coronavirus restrictions further as daily cases surpassed 10,000 and the death toll hit a record 141 despite an overnight curfew in Bangkok and several other provinces
Read more

An elite FBI agent shoots his estranged wife after he says she came after him with a knife -- was it self-defense or murder? "48 Hours"' Susan Spencer investigates Saturday, Aug. 20 at 9 p.m. ET/PT on CBS.
Read more

In an exclusive interview with CBS News, the FBI is confirming preliminary statistics in its annual crime report for 2020 showing homicides climbed 29% despite widespread lockdowns. CBS News homeland security and justice reporter Nicole Sganga spoke with the …
Read more

Don't miss a single pass, sack or touchdown this season thanks to our guide on watching NFL live streams in every corner of the world.
Read more

A 47-year-old woman missing for months has been found alive in Diamond Fork in Utah County.
Read more

Dave Chappelle has been criticized by many for recent jokes about transgender people, but he's included such material in his act for years.
Read more

Media consulting firm Ormax Media has released the largest audience research to size the OTT universe in India, titled The Ormax OTT Audience Report 2021. The research was based on a sample size of 12,000 across urban and rural India.
Read more

Without the U.S. in Afghanistan, Israel Feels Alone With...

Without the U.S. in Afghanistan, Israel Feels Alone With Threat of Extremismbloomberg.com
Read more

Dianne Gill waited 11 months to see a specialist and says she has been stripped of her independence.
Read more

Pfizer Inc. and BioNTech SE’s coronavirus vaccine blocked 94% of asymptomatic infections in an Israeli study that further builds the case for the shot’s overwhelming effectiveness against the virus a year after the pandemic began.
Read more

Club completes challenge to bag all 282 Munros in...

Members of Carnethy Hill Running Club reached the summits of all 282 mountains in a single day.
Read more

A couple of rumors around the upcoming iPhone 13 models are now looking more likely to happen than ever.
Read more

Even if you bought a car with a five-star safety rating, if you're hit from behind, your seat may not protect you or the children sitting behind you. Experts say in certain crashes, some car seats can break and collapse, leading to paralysis or death. Kris Va…
Read more

The Skullcandy Dime prove that wireless earbuds don't have to be expensive.
Read more

One of the world's biggest syringe makers has ramped up production to meet the Covid demand.
Read more

Christopher Nolan’s next movie may not launch on HBO...

Christopher Nolan's next film, believed to be another World War II era flick, might not be produced by Warner Bros.
Read more

Kim Kardashian joins those lamenting the news about the second series of the popular Netflix show.
Read more

Hong Kong's pro-democracy Apple Daily shuts down after the government froze the newspaper's assets. It has been a relentless critic of China's Communist Party. Ramy Inocencio reports.
Read more

Rudy Giuliani suspended from practice of law in New...

The first major assessment from the UN-backed Intergovernmental Panel on Climate Change in nearly a decade sees no end to rising temperatures before 2050.
Read more

The 2021 Copa America has been left without a host less than two weeks before it starts after Argentina was stripped of the tournament.
Read more

The Sundance Film festival announced that it is requiring attendees to be vaccinated for its 2022 festival. Sundance Festival director Tabitha Jackson said ...
Read more

One Afghan evacuee in custody after security screening at...

One person evacuated from Afghanistan to a U.S. military base in Germany is in custody after failing security screening but is not believed to be a "high threat," the top U.S. general in Europe said Thursday.Speaki...
Read more

New York plumber who once ran for state Senate...

A Brooklyn plumber who once ran for New York state Senate was arrested Wednesday and charged with taking part in the Jan. 6 storming of the US Capitol, federal prosecutors said.
Read more

He's gone longer without one than any president in the past 100 years.
Read more

The Samsung Galaxy S22 could land this year

A leak suggests the Samsung Galaxy S22 range could land in December, but we wouldn't count on it.
Read more

Quantas CEO: ‘Governments are going to insist’ on vaccines...

The CEO of an Australian airline said he thinks "governments are going to insist" on vaccines for international travelers "as a condition of entry."Alan Joyce of Quantas Airways Limited ...
Read more

The death certificate of Jamal Sutherland, who died earlier this year in a South Carolina jail while being forcibly removed from a cell by deputies, has been changed to say the manner of death is homicide, attorneys for his family told CNN on Tuesday.
Read more

Bruno Fernandes misses a 93rd-minute penalty as Aston Villa win at Old Trafford for the first time in 12 years in a thrilling match.
Read more

The Xbox Series X is hard to find in stock, but we'll explain how to find the Microsoft console in stock today.
Read more

Former President Trump on Monday went on a tirade against Anthony Fauci and Deborah Birx, two of his former top medical advisers on the COVID-19 pandemic, excoriating their decision-making during his administration on the...
Read more

The new AMD RX 6600 XT is already scarce , but it might get even harder to find if its cryptomining hashrate is too high.
Read more

The Takata airbag recall may get bigger; Spam goes...

Polish writer could be jailed for describing president as...

Polish writer Jakub Zulczyk is facing possible jail time after he criticized Polish President Andrzej Duda and referred to him as a "moron" on social media....
Read more

The expansion could mean that 90 percent of American adults will have access to coronavirus vaccines in a matter of three weeks.
Read more

Football Focus discusses the Newcastle United takeover story, what it means for the city, the club and the current manager Steve Bruce.
Read more

A Democrat Hunts for Votes in Trump Country

Lucas Kunce, 38, running for Senate in Missouri, hopes to break the Democratic mold. The post A Democrat Hunts for Votes in Trump Country appeared first on The American Conservative.
Read more

The bodies of a woman and two children were found inside a car that was found partially submerged in Lake Eufaula, authorities say, and a possible suspect was being treated at a hospital
Read more

A review of evidence gathered after the IRA bomb in Manchester has produced "limited" leads, police say.
Read more

An open letter from 11 prominent organisations calls on the US rapper to help fight misinformation.
Read more

Asian shares were enjoying a relief rally on Monday as record highs on Wall Street and policy easing in China helped calm some of the recent jitters on global growth, though plenty of potential pitfalls lay ahead this week.
Read more

The Inspector General for the Department of Homeland Security said in a report on Wednesday that federal law enforcement was ill-prepared ahead of unrest that swept the U.S. last summer. CBS News senior investigative correspondent Catherine Herridge joins Cai…
Read more

A woman accused of killing Harry Dunn was due to give evidence in front of his parents next week.
Read more

Border apprehensions remained at a 20-year high in April

Most of the migrants apprehended along the U.S.-Mexico border in April were single adults, the majority of whom are being expelled to Mexico under a public health order.
Read more

Iran on Saturday named the man it believes is behind the attack on its nuclear facility in Natanz that could set back uranium enrichment at the site for months.
Read more

"There have been many weeks in 2021 that the number one reason for presenting to our emergency department is a suicide attempt," Dr. David Brumbaugh, chief medical officer for Children's Hospital Colorado, said on Tuesday.
Read more

A top police lobbying group slammed calls to defund the police on Tuesday as criminal justice reform advocates and others marked the one-year anniversary of the death of George Floyd in police custody.The National...
Read more

NM man charged with murder says he killed more than a dozen...