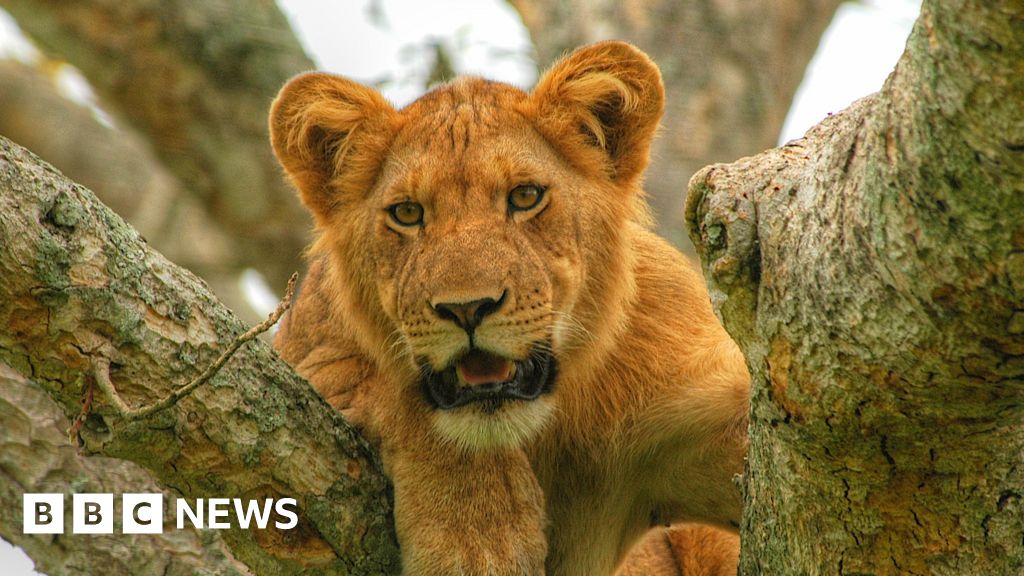 Six lions have been found dead and dismembered after a suspected poisoning in one of Uganda’s most famous parks.

The lions were found in Queen Elizabeth National Park with their heads and paws hacked off, and their bodies surrounded by dead vultures, officials said.

An investigation has now been launched, with conservationists working with local police at the scene.

These particular lions are known for their unique ability to climb trees.

In a statement, UWA’s communications manager Bashir Hangi said they were “saddened” by the killings.

He added that nature tourism is an important part of Uganda’s economy, contributing about 10% of its GDP, and plays a vital role in the conservation of animals.

“UWA strongly condemns the illegal killing of wildlife because it does not only impact negatively on our tourism as a country, but also revenue generation, which supports conservation and community work in our protected areas,” he said.

There have been a number of previous incidents where lions in Queen Elizabeth National Park were believed to have been poisoned.

In April 2018, 11 lions – including eight cubs – were found dead after a suspected poisoning. A similar incident led to the deaths of five lions in May 2010.

media captionIn 2018, the BBC looked at why lions were being poisoned in Uganda

It looks like something to celebrate: small businesses posting “Help Wanted” signs as the economy edges toward normalcy
Read more

Fox News host Tucker Carlson responded Friday on “Fox News Primetime” to criticism after his revelation the NSA had reportedly "unmasked" him in communications in which he sought an interview with Vladimir Putin.
Read more

Asheville rising star Indigo de Souza finds power in casting her feelings as obvious truths. She tells MTV News how her newest album, 'Any Shape You Take,' reflects how she moves through the world.
Read more

The future of the Violence Against Women act is hanging in the balance of the Senate as lawmakers debate reauthorizing the legislation. The bill, initially passed in 1994, is designed to address crimes often committed against women, like domestic abuse. The c…
Read more

Key industries in China and India face the prospect of months of further disruption to electricity supply.
Read more

WHO vaccine advisers recommend boosters for people with weakened...

The World Health Organization's (WHO) vaccine advisory group on Monday recommended that immunocompromised individuals who have been fully vaccinated with a WHO-approved COVID-19 vaccine receive a booster dose.The S...
Read more

A 1-year-old is in grave condition after he was shot in the head during an apparent road rage incident in Chicago, officials said.
Read more

An international arrest warrant had been issued for Qinxuan Pan in connection with the killing of Kevin Jiang.
Read more

Almanac: The forerunner of hypnotism

On March 5, 1815, Franz Anton Mesmer, a German doctor whose controversial methods to harness a force he called "animal magnetism" were the forerunner of modern hypnotism, died at age 80. Jane Pauley reports.
Read more

Chicago Mayor Lori Lightfoot (D) is considering implementing so-called vaccination passports that would allow city residents to gain preferred seating and access to events as a way to encourage people to get vaccinated ag...
Read more

On The Money: Trump asks court to block release...

Happy Tuesday and welcome back to On The Money, where we're still waiting for our invitations to former President Obama's 60th birthday party. I'm Sylvan Lane, and here's your nightly guide to every...
Read more

A judge has granted lawyers for Jussie Smollett more time to prepare arguments on several issues, including whether they can introduce a key witness’s previous conviction for battery
Read more

Homeland Security chief says there are no credible 9/11...

Despite the lack of a specific threat, DHS warned the 9/11 anniversary could create a "heightened threat environment," and Mayorkas said the agency is "ever vigilant."
Read more

Lordstown Gets Thrown a Lifeline From Top IPhone Maker...

The Treasury was "reluctant" to say the scheme could be used this way, emails from a civil servant suggest.
Read more

Lesotho is probing the deaths of five people who had received the Johnson & Johnson Covid-19 vaccine in its northern district of Leribe, according to Health Minister Semano Sekatle.
Read more

Hong Kong police say they have seized 195 million Hong Kong dollars ($25 million) worth of illegal drugs as part of a monthslong investigation, the largest seizure of the year
Read more

Yellen: ‘Safest’ thing to do is make sure infrastructure...

Treasury Secretary Janet Yellen during an interview Sunday said it would be "safest" to include the means for President Biden's infrastructure plan to fund itself while declining to answer whether President Biden would si...
Read more

China's national health authority said the patient was ready to be discharged, while the H10N3 strain of avian influenza was not likely to cause a large-scale outbreak.
Read more

This material may not be published, broadcast, rewritten, or redistributed. ©2021 FOX News Network, LLC. All rights reserved. Quotes displayed in real-time or...
Read more

Man shoots bear in self-defense after animal breaks into...

A California man is lucky to be alive after shooting a bear who managed to break into his home and attack him.
Read more

Breathless, beautiful and brilliant. The Champions League returns with a riotous night across Europe.
Read more

Thirty-plus privacy, consumer and anti-monopoly groups are coming together to stop big tech platforms from tracking and categorizing individuals for the purpose of narrowly targeting advertising.The broad coalition...
Read more

A Conservative spokesperson confirms Mr Seed will not take up the post if he wins the election.
Read more

Multiple content creators on the video platform have been sharing theories and tracking every development in the case in viral videos.
Read more

The Biden administration on Friday asked a federal court to toss a lawsuit that is seeking to prevent states from importing cheap prescription drugs from Canada.The White House said in a court filing that a lawsuit...
Read more

Interest in CPR and defibrillators has been pulling the attention of Danes away from soccer’s European Championship since the collapse of Christian Eriksen.
Read more

US slightly revises up its GDP estimate for Q2...

The U.S. economy expanded at a 6.7% annual pace from April through June, the Commerce Department said, slightly upgrading its estimate of last quarter’s growth in the face of a resurgence of COVID-19 in the form of the delta variant
Read more

Teenager Rubin Colwill scores twice as Cardiff City came from behind to win 2-1 and keep Nottingham Forest winless and bottom of the Championship table.
Read more

For The People Act will empower small donors and...

Simply put, small donor public financing grows the ranks of donors so that they are more like all Americans. It does so by changing the culture and practice of politics in three ways that get us closer to our ideal of a truly representative democracy.
Read more

New court documents say a search warrant being served when deputies shot and killed a Black man in North Carolina says that investigators used information from an informant, including recordings of drug buys
Read more

The insect flew through an open window, striking the driver in the face.
Read more

Sen. Kennedy reveals the truth about the bipartisan infrastructure...

Anders and Anne Holch Povlsen have gone to court in a bid to overturn permission for Space Hub Sutherland.
Read more

NFTs are both priceless and worthless

It is no longer possible to ignore NFTs, the crypto off-shoot that can tie intangible assets to specific, unalterable tokens. Interest in NFTs (non-fungible tokens) has spiked over the last year, and is now breaking into the mainstream with several h...
Read more

Landlords are unsympathetic figures in the eyes of many struggling tenants, but they’re emerging as a new economic problem for Congress and the White House.
Read more

'The Five' sounded off about parents being criticized for pushing back on AG Merrick Garland's pointed memo.
Read more

The second day of the Derek Chauvin trial was dominated for the most part by a handful of eyewitnesses who recanted wrenching details of what they observed on the night of May 25, 2020 in the Powderhorn neighborhood on Mi...
Read more

This year's ceremony was held in a train station and had far fewer people and light-hearted moments.
Read more

The logical flaw in thinking the new government UFO...

The new UFO report from intelligence agencies to Congress doesn't mention aliens and extraterrestrials. It's a flaw of logic to think it would.
Read more

Social media must do more to support vaccination, surgeon...

"The reality is that misinformation is still spreading like wildfire in our country," Vivek Murthy said.
Read more

Microsoft's next-gen console is back in stock at Target, Walmart and Newegg, while the Xbox Series S is available at several retailers.
Read more

Pelosi Says Masks to Stay on House Floor Despite...

House Speaker Nancy Pelosi said masks will still be required for members of Congress and staff on the House floor despite new guidance from the U.S. Centers for Disease Control and Prevention that face coverings aren’t needed for those who are fully vaccinate…
Read more

Carbon prices in the European Union's emissions trading system are expected to rise significantly in the next decade due to tougher climate goals, market participants said in an industry survey published on Monday.
Read more

More than 100,000 acres have burned in Arizona wildfires

Two growing wildfires in eastern Arizona have burned more than 109,000 acres as of Monday afternoon, according to officials at the interagency Incident Information Center.
Read more

The British government plans to expand student loan programs to give all adults access to four years of university or job training throughout their lifetimes as part of a legislative program designed to help the U.K. recover from the COVID-19 pandemic
Read more

Simone Biles was recognized as one of Time's most influential people of the year for being a "shining example" of strength.
Read more

The Private Equity Money Behind Soccer

There's a battle brewing among private equity giants and this time, the competition is playing out on a soccer field. Bloomberg’s Dani Burger reports on how some investors are turning around sport franchises to score big profits. (Source: Bloomberg)
Read more

Decisions taken by the government on the traffic light travel list were not unlawful, judges rule.
Read more

The 51-year-old super-producer revealed on Monday that he changed his middle name from his maiden “John,” for which Combs launched his famed Sean John clothing line in 1998 and later sold a majority stake to Global Brands Group in 2016 – to “Love,” which he h…
Read more

"People are gathering with others," Milwaukee Health Commissioner Kirsten Johnson said. "And that is going to cause a spread."
Read more

Texas hospital system first to require all employees get...

A Texas hospital system is the first in the nation to issue a COVID-19 vaccine mandate for staff, according to ...
Read more

The petition has reached nearly 40,000 signatures while the token has fallen in price over the past two weeks.
Read more

Waze app could help you find a parking spot

The popular navigation app Waze is rolling out a feature that could help you find an available parking spot. CNET senior editor Ashley Esqueda joins CBSN with details.
Read more

Tony Mumford, who had a repair shop in Twickenham called Toe-Knees, died a week after crashing.
Read more

How non-binary TikTok creators are helping a generation find...