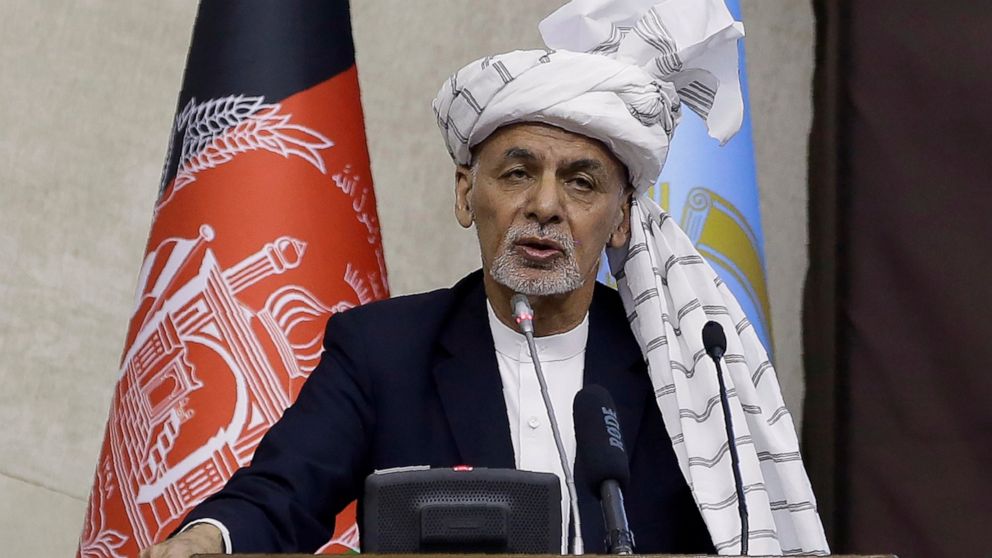 In May 2020, Ghani and political rival Abdullah signed a power-sharing agreement, two months after both declared themselves the winner of the September 2019 presidential election. Under the deal, Ghani remained president of the war-torn nation while Abdullah was named head of the country’s National Reconciliation Council, which has the authority to handle and approve all affairs related to Afghanistans peace process. Abdullah would also be able to appoint half of Ghanis Cabinet and issue executive orders.

On Friday, the National Security Council issued decrees on behalf of Ghani in which he dismissed Interior Minister Masoud Andarabi and appointed Hayatullah Hayat as caretaker minister. In recent years, Hayat has served as governor of southern Kandahar province.

There was little explanation for the changes, but the moves angered Abdullah. This decision is against the interests of the country in the current situation and is unacceptable, he said in a statement released Saturday.

The changes come as a May 1 deadline nears for the withdrawal of U.S. troops and America has increased pressure on both the national government and the Taliban to end decades-old fighting.

The Cabinet changes could be a sign that Ghani is pushing back against the U.S. and oppositions increasing support for an interim administration. Ghanis critics have accused him of clinging to power. He says he will leave office only through elections.

The statement from Abdullahs office said the decision to remove Andarabi came without consultation, without justifiable reason or reasons, was hastily (made) and in opposition to a political agreement between the two parties.

The new appointments come as Afghanistan experiences a nationwide spike in bombings, targeted killings and other violence as peace negotiations in Qatar between Taliban insurgents and the Afghan government stall.

On Thursday, Russia hosted the first of three international conferences aimed at jump-starting the peace process ahead of the May 1 deadline for the final withdrawal of U.S. and NATO troops from the country.

The Taliban warned Washington on Friday against defying the deadline, promising a reaction if it does, which could mean increased attacks by the insurgent group.

The talks in Qatar between the Afghan government and the Taliban have stalled, but Russia voiced hope that the talks in Moscow could help reinvigorate them. Jennifer Johnson lied about a sweatshirt - it was a key piece of evidence in Russell Bishop's trial.
Read more

State-run refiners in India are looking to buy less crude from Saudi Arabia as demand in the Asian nation is poised to dip amid a resurgence of Covid-19, and relations between the two countries sour over prices.
Read more

What I saw in Afghanistan: It’s time to go

President Biden’s announcement of the withdrawal of American military personnel from Afghanistan by Sept. 11 will create uncertainties after this longest of American wars. But it is time to go. The U.S. has met the original objectives in Afghanistan, and the …
Read more

Shaw Held Talks With Another Bidder Months Before Rogers...

The coronavirus pandemic put international adoptions on hold, putting families that were expecting to adopt from countries like China in limbo since early 2020.
Read more

Weary of mounting accusations of financial misconduct against Prime Minister Andrej Babis, Czech voters could oust the billionaire businessman from power in the two-day parliamentary election that starts on Friday.
Read more

Championship side London Broncos are to go part time for the 2022 season onwards, as they anticipate reduced RFL funding.
Read more

Mexico has so many criminals to deal with that critics are openly wondering why the government has sought to lock up 31 academics, professors and researchers in the country's top maximum security prison
Read more

House Speaker Nancy Pelosi has not yet said whether she will veto the Republican nominees to the January 6 Select Committee. House Minority Leader Kevin McCarthy selected five GOP congressional members to join the commission, which will investigate the deadly…
Read more

New Alienware m15 gaming laptop has been crippling its...

Here are all the retailers offering the iPhone 13...

The iPhone 13 series is now here and these are the retailers with the quickest deliveries on their deals.
Read more

Australia to Resume Repatriation Flights From India on May...

USA's Sydney McLaughlin sets a new world record of 51.46 to beat Dalilah Muhammad to win the 400m hurdles at the Olympic Stadium in Tokyo.
Read more

Policybazaar IPO stacks up in a price comparison –...

A price comparison exercise just about stacks up for Policybazaar. The online supermarket for insurance and loans is the latest Indian technology company to file to go public in recent weeks. The money-losing SoftBank-backed Read more

Covid-19: Rate of Indian variant spread, and the future...

This week: Democrats eye next step after coronavirus relief...

Democrats are hunting for their next big legislative agenda item, after President Biden signed a sweeping coronavirus bill last week giving the party their first win after taking back the Senate and the White House....
Read more

Apple AirTags are only a month old, but the company is already issuing some software updates.
Read more

New York just legalized weed. So what’s next with...

New York is the fourth state to legalize recreational use of marijuana.
Read more

China's rubber-stamp parliament on Thursday overwhelmingly endorsed a proposal on "improving the electoral system" of Hong Kong, further restricting the ability of people in the city to freely elect their leaders.
Read more

Some frozen food products have been recalled after a number of customers found glass in the box; Caitlyn Jenner signs deal with an H&M sports advertising campaign. Those headlines and more from CBS MoneyWatch's Hena Daniels at the New York Stock Exchange.
Read more

EXPLAINER: How is ‘reasonableness’ key to Chauvin’s defense?

Chris Higgins was diagnosed with dementia in lockdown after his wife noticed a change in his behaviour.
Read more

Austin, Texas, police are now asking the public to use 311 instead of 911 to report non-emergencies, authorities said.
Read more

Canadian pastor Artur Pawlowski went on "The Ingraham Angle" Wednesday to discuss his most recent arrest in Canada for violating the country's COVID mandates.
Read more

The former prime minister has been criticised for lobbying on behalf of Greensill Capital.
Read more

Squid Game Halloween costumes are going to be big...

Fans of a certain TV show don’t have to worry about their Halloween costumes this year.
Read more

Tucker Carlson: Media will never admit there was no...

Sir Kenneth Branagh: The Browning Version cancelled due to...

The Terrence Rattigan play was due to open in west London next month, with proceeds going to Rada.
Read more

Nearly all businesses are expecting to face a cyberattack...

Without a body, and without direct DNA evidence, J. Warner Wallace has solved cold case murder cases that were decades old. His expertise in cracking some of the most baffling crimes, made him one of the most sought-after detectives. But then this one-time at…
Read more

A former Royal Marine who runs an animal charity in Afghanistan says he, his Afghan staff and dozens of dogs and cats are stuck outside Kabul's airport as they try to get a flight out of the country
Read more

‘The Falcon and the Winter Soldier’ finale completes its...

While more conventional than "WandaVision," Marvel's "The Falcon and the Winter Soldier" explored a bracingly provocative theme over its six-episode run -- namely, can a Black man in good conscience take up the mantle of Captain America?
Read more

The growing market wagers about the most aggressive interest-rate tightening in India of any nation in Asia are wrong, according to Aditya Birla Sun Life AMC.
Read more

Biden warns he’ll tell Putin ‘what I want him...

President Joe Biden told a hangar of US troops on Wednesday he was in Europe to defend the very concept of democracy, setting high stakes for his first presidential trip abroad and warning Russian President Vladimir Putin he planned to raise touchy issues dur…
Read more

More than 3,000 miles away from the action in Baku, fans in Wales react to the result.
Read more

Tanzanian President Samia Hassan publicly admitted for the first time the presence of the Covid-19 pandemic in the East African country, in a departure from the denialism of her predecessor.
Read more

Rumors have been swirling for a while that a new iPad (2021) could be announced at Apple's next event, and it looks like even the Apple Store is teasing a launch.
Read more

A man was found with a fatal head injury in Tower Hamlets Cemetery Park on Monday morning.
Read more

Could higher temperatures cause more snow?

Egypt has received a batch of more than 1.7 million doses of the AstraZeneca (AZN.L) vaccine through the COVAX initiative, the health ministry said on Thursday.
Read more

The online grocer says the blaze was caused by a collision between robots at one of its warehouses.
Read more

The space agency will send a rover to look for water-ice near a crater at the Moon's South Pole.
Read more

Olympic champions Great Britain fight back from conceding an early goal to beat Ireland 2-1 in the opening game of the three-match series in Belfast.
Read more

The menthol ban would be one of FDA’s most aggressive tobacco reform efforts since the agency first began regulating the industry in 2009.
Read more

'It Feels Good To Be Back': This Is The First Look At The Challenge: All Starsmtv.com
Read more

Trapped in the woods: Belarus accused of using migrants...

South Africa's high rate of unemployment has cast a pall over Youth Day, the holiday honoring the 45th anniversary of the Soweto student protests which played a key role in ending apartheid, the previous regime of racist, minority rule
Read more

British officials on Wednesday launched a national coronavirus "booster" shot trial to study the effects of a third shot in extending protection against COVID-19.Under the trial, seven coronavirus shots, including...
Read more

Fifty-six years ago, Irene Garza's body was found floating in an irrigation canal. On March 14, 2016, former priest John Feit was charged with her murder.
Read more

Thousands of Indian farmers are blocking major roads and railway tracks outside the capital of New Delhi, marking one year of protests against agricultural laws that they say will shatter their livelihoods
Read more

Any stay-local rules brought in are likely to vary depending on area, the health minister says.
Read more

A New Direction on Drugs

Jasslyn Yeo on the Markets (Radio)

A derelict plot on the banks of the Danube River in Budapest may seem an unusual epicenter for a political earthquake.
Read more

A man who died Sunday marked the first fatality in a mass shooting over the weekend in Austin, Texas, that left more than a dozen people wounded.
Read more