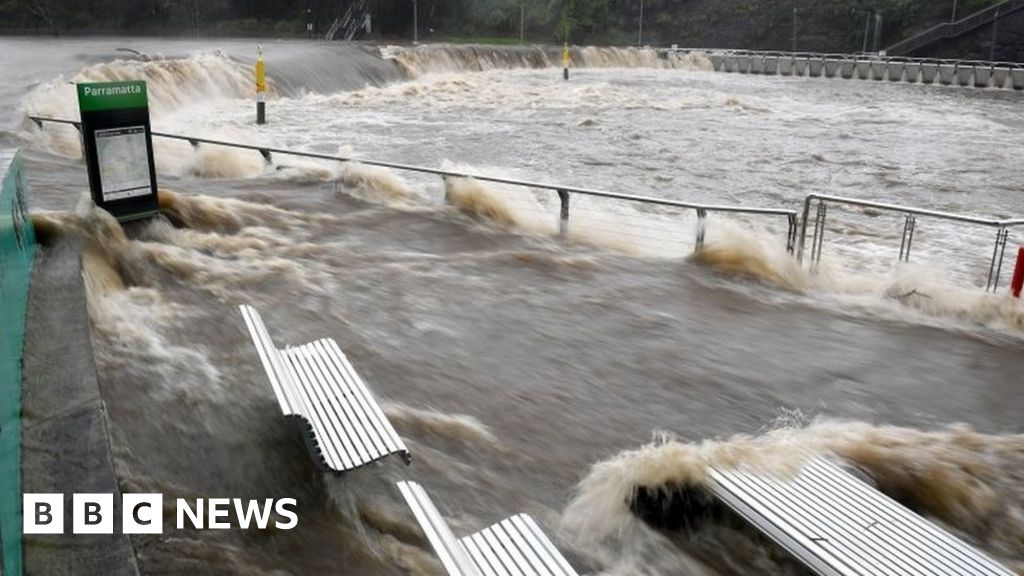 Dozens of people have been rescued from floodwaters, and residents in many low-lying communities of New South Wales have been ordered to leave their homes.

Police say hundreds of people have flocked to evacuation centres in areas north of the city of Sydney.

Major roads have been shut. Footage has emerged of a house being swept away.

Dams around Sydney are expected to overflow over the weekend, WaterNSW warns.

Up to 100mm (four inches) of rain is forecast for Sydney, and as much as 300mm for the lower Blue Mountains, west of the city.

Agata Imielska from the Bureau of Meteorology warned of localised intense rainfall and damaging winds, saying the public should be aware of “dangerous conditions” that can change quite quickly.

More storms are forecast in the coming days, and parts of eastern Australia could receive up to a metre of rain in the space of just a week, the BBC’s Phil Mercer in Sydney reports. Qatar Petroleum plans to issue up to $10 billion of bonds as soon as this quarter to fund a massive natural-gas project, according...
Read more

Caris LeVert scored 28 points and the Indiana Pacers snapped a six-game home losing streak with a 116-111 victory over the Detroit Pistons on Wednesday.
Read more

Black, Bennett, Hanson: America and a tale of two...

President Biden is needlessly gambling with the survival of any non-Taliban regime in Afghanistan. The three of us agree on that.
Read more

Biden told allies in June US would ensure Kabul’s...

President Biden told allies in the Group of Seven back in June the U.S. would ensure Kabul’s stability after withdrawing from Afghanistan, a British diplomatic memo obtained by Bloomberg showed.
Read more

Boris Johnson’s aide-turned-nemesis may be about to take his...

As political dramas go, this has the potential to be a box office hit: On Wednesday Boris Johnson's top aide-turned-nemesis, Dominic Cummings, is expected to reveal everything he knows about the UK government's far from flawless handling of Covid-19.
Read more

New coronavirus infections in the United Arab Emirates are mostly from more infectious variants leading to an increase in the number of virus-linked deaths, a federal authority has said.
Read more

Millions in the West are still under heat warnings...

More than 4 million people remain under heat warnings in parts of the Pacific Northwest as drought conditions could be exacerbated by record high temperatures through the holiday weekend.
Read more

People coming to the country without a visa or immigration status will need a permit, the government says.
Read more

France: Man who threw egg at Macron in psychiatric...

And Andrew Cuomo gives his first interview since saying he would resign.
Read more

The Stakes of a Nuclear Missile Monopoly

The consolidation of the defense industry hurts American innovation and resilience. The post The Stakes of a Nuclear Missile Monopoly appeared first on The American Conservative.
Read more

Lawyers for Myanmar's deposed leader, Aung San Suu Kyi, say the military junta will start presenting its case against her in court next Monday
Read more

Former President Trump and the House Oversight Committee are both appealing a judge's decision this week ordering his accounting firm to turn over some of his personal and corporate financial records to House D...
Read more

Newspaper headlines: Jab hope to save summer and pensions...

St Vincent volcano: ‘We don’t know if we can...

White House press secretary Jen Psaki said during a press conference Friday that the president is "worried" about this initiate to curtail voting rights.
Read more

Presented by Equinor Where in the world Eric Adams? We see himeveryday on thecampaign trail, but its a bit of a mystery where the...
Read more

Ohio Gov. John Kasich served in Congress during a government shutdown in 1995. He was the last Republican standing against Donald Trump in the Republican primary race in 2016, where he delivered a speech during his campaign called "Two Paths" to differentiate…
Read more

Phishing, malware and DDoS attacks are just a few of the ways hackers can try and take over your website.
Read more

House Republicans could vote as early as today to replace Rep. Liz Cheney as GOP conference chair over her opposition to former President Trump. Follow here for the latest.
Read more

Taliban fighters captured Kunduz, one of Afghanistan’s main cities, on Sunday as the militants seized on the withdrawal of U.S. forces to sweep into provincial capitals.
Read more

The White House and U.S. State Department are holding up charter planes at an airport in Afghanistan’s Mazar-i-Sharif that would transport 19 Americans and 40 SIV holders to Albania, David Rohde, the executive editor at NewYorker.com said in an interview Mond…
Read more

Adam Peaty remains on course to become the first British swimmer to retain an Olympic title as he breezed into the 100m breaststroke final.
Read more

Jerusalem: Third night of violence ahead of planned Jewish...

Hundreds of Palestinians and more than 20 Israeli police officers have been injured in the protests.
Read more

Bayer’s $62B bid for Monsanto, and other MoneyWatch headlines

Tottenham striker Harry Kane says he "would never and have never refused to train" and is planning to return to the club on Saturday.
Read more

We must resist the latest COVID-era power grab: the...

I say enough. I urge everyone to get the vaccine if you think you need or want it. And then I urge everyone in America to throw away their masks, demand their schools be open, and live your lives free of more government mandates and interference.
Read more

"We have the responsibility and the resources to secure safe passage for them now, without bureaucratic delay," the former president said.
Read more

Devine: Hunter Biden has a lot of ‘chutzpah’ for...

Police in Arizona released a trove of evidence in the murder of Charles Vallow, the first husband of Lori Vallow. Among those seen in interview videos is Tylee Ryan, whom Lori Vallow is accused of killing just months later. Nikki Battiste reports.
Read more

Pentagon officials confirmed Sunday that the ongoing stoppage of traffic caused by a grounded container ship in the Suez Canal would affect the movement of U.S. military vessels, but stressed that the Defense Department had alternative means of...
Read more

The rise in US Covid-19 hospitalizations is a self-inflicted...

Health experts blame the recent surges in Covid-19 cases on the low rate of vaccinations, and now the accelerating Delta variant is threatening to increase hospitalizations and deaths as well, an expert said.
Read more

Pope Francis is offering prayers for the victims of Italy's cable car disaster, and for “little Eitan,” the lone survivor
Read more

Mitski Makes A Powerful Return (In A Cowboy Hat)...

Mitski returns with a powerfully emotive new video for 'Working for the Knife' and announces new 2022 tour dates.
Read more

Serrana, a city in southeastern Brazilian state of Sao Paulo, has seen a 95% drop in COVID-19 deaths after it concluded vaccination of almost all adults, TV Globo reported on Sunday.
Read more

N Ireland leaders call for calm after night of...

Rioters set a hijacked bus on fire and hurled gasoline bombs at police in Belfast in the fourth night of violence in a week in Northern Ireland, where Brexit has unsettled an uneasy political balance
Read more

LeBron James and the Los Angeles Lakers were eliminated by the Phoenix Suns in the first round of the NBA playoffs last month. Now, the four-time NBA MVP is spending time at his son’s prep basketball games, where he caused a scene during a game on Saturday.
Read more

GOP congressman who voted to impeach Trump will not...

Anthony Gonzalez is the first congressman who voted to impeach former President Trump to not run for another term.
Read more

Grace makes landfall as a category 3 hurricane in...

Grace, a category 3 hurricane, made landfall south of Tuxpan on the eastern coast of Mexico early Saturday, as the president urged residents in its path to seek refuge in shelters or on higher ground.
Read more

The Switch OLED is a controversial system, but it’s hard to deny that some games will look gorgeous on that updated handheld screen.
Read more

Donald Trump has some *deep* thoughts on Medina Spirit

The big news in the sporting world over the weekend was that Medina Spirit, the surprise winner of the Kentucky Derby, had tested positive for an anti-inflammatory drug that is often used to mask injury or ease joint pain in thoroughbred racehorses.
Read more

Moss said Sunday night on the air that she would expose "discrimination" at her Detroit station.
Read more

Jason Riley: The Congressional Black Caucus does not represent...

Republican freshman Rep. Byron Donalds, one of two Black Republicans in the House, says he has not received an invite to join the Congressional Black Caucus despite voicing interest to multiple members.
Read more

Firefighters are scrambling to control an inferno in southeastern Oregon that's spreading up to 4 miles a day in windy conditions as wildfires across the U.S. West strain firefighting resources
Read more

Interest in cryptocurrencies has surged over the past year, and policymakers are scrambling to catch up. Investors have rushed into major digital currencies such as bitcoin and a growing industry of financial products tie...
Read more

North Korea on Wednesday said that it has successfully tested a new hypersonic missile in the latest weapons demonstration from the rogue nation. Korean Central News Agency, the country's state m...
Read more

The rally will include appearances by civil rights attorney Ben Crump and the family of George Floyd.
Read more

The Treasury Department released a detailed rebuttal of Republican criticism of support for an increase in International Monetary Fund reserve assets, saying that it will help support the global and U.S. economic recovery.
Read more

The fate of the legislation remained unsettled midday as a key vote stayed open for more than three hours while Republicans weighed whether to block it.
Read more

Ex-Facebook recruiter speaks out about ‘a problematic system’ that...

A former Facebook recruiter is speaking out against the tech giant's hiring system and workplace culture, which he says fail to reach the company's diversity goals and alienates people of color. ...
Read more

More than 100 staff members at Houston Methodist Health are facing termination if they do not get the COVID-19 vaccine by midnight on June 7. They're suing their employer over the policy, falsely claiming the vaccines are not fully tested nor proven safe. Jan…
Read more

Wratten on Travel; Tata on RTO; Taylor on Football...

These Bose 700 deals are dropping to record low...

Bose 700 headphone deals can save you $50 this weekend, with some record low prices on the Triple Black model.
Read more

Rep. Brendan Boyle (D-Pa.) announced on Friday that he will forgo a bid for an open and highly-contested Pennsylvania Senate seat.The Philadelphia-area congressman had been mulling a potential bid for months to fil...
Read more

China to Curb Massive Foreign Flows as It Opens Up: CSRC's Yi

Critics of Brazil's president being targeted by security law