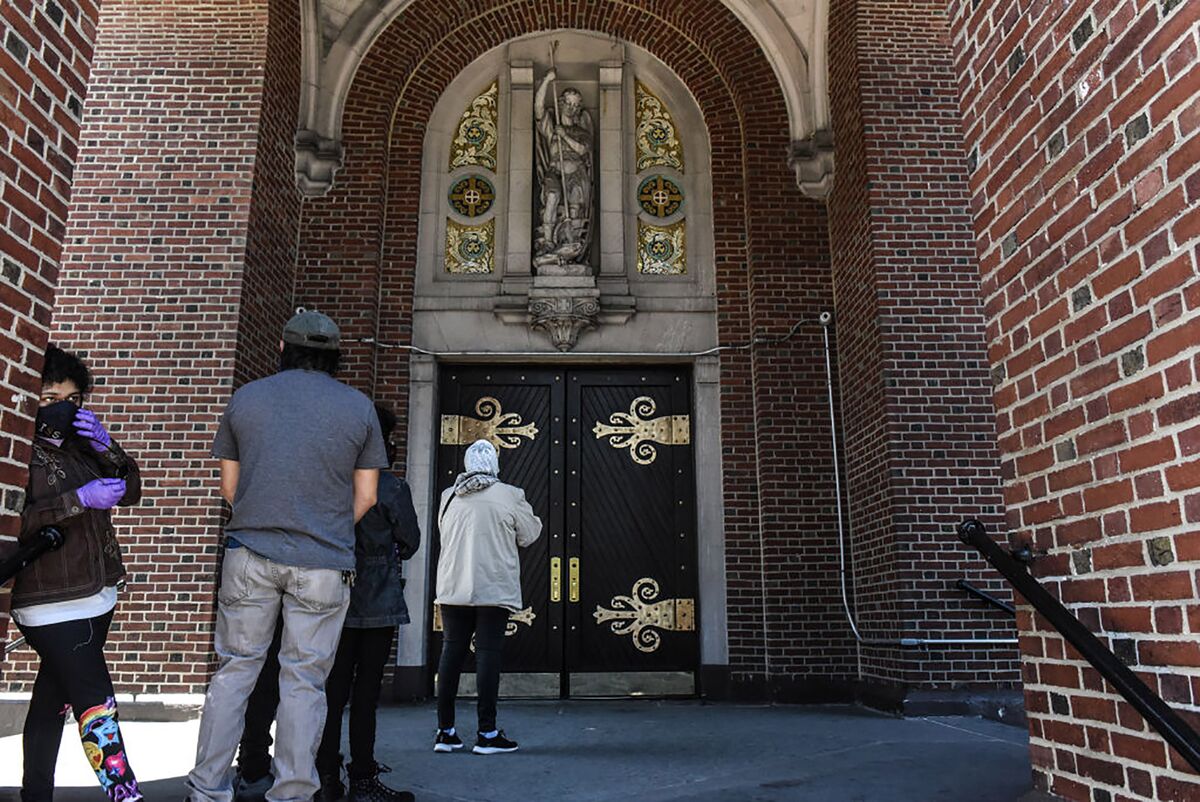 Sign up here for our daily coronavirus newsletter on what you need to know, and

subscribe to our Covid-19 podcast for the latest news and analysis.

Places of worship are slowly reopening across the U.S., but generally more quickly in southwestern states.

Large cities that were hit hard by the virus and stay-at-home orders are showing more tepid religious-property usage in early March, according to data from Brivo, which records the time and location of tens of millions of commercial-building access events from doors connected to its platform.

Data for New York City show fewer than one-third and in San Francisco less than half of religious buildings have reopened. Meanwhile, more than 83% in Salt Lake City are open.

Reopenings of religious buildings are generally higher in southwest

Note: Assumes that in February 2020, before the widespread pandemic induced shut downs, institutions were operating at 100%

Overall, Brivo data shows that Americas commercial buildings are 58% reopened as of March 12, compared with the pre-pandemic daily average in February 2020. Religious buildings remain 26.5% below the normal access rates.

Last year, less than half of Americans identified as being a member of a church or synagogue, the first time the figure has fallen below 50% since Gallup started

And for the second year in a row, less than half of the U.S. population deems religion as very important in life.

surveys have found people in the Southeast and Southwest more religious than those in New England and the Pacific, and the

importance people assign to places of worship may be reflected in the reopening data. Sign up here for our daily coronavirus newsletter on what you need to know South Korea reversed a decision to relax mask rules in...
Read more

Craft the Enchanted Storybook Castle at Home with Disney...

Parents with learning disabilities in Wales ‘set up to...

A charity says vulnerable parents are not being given a chance to keep their children out of care.
Read more

Arkansas Gov. Asa Hutchinson (R) on Thursday signed a law that will ban transgender girls and women from participating in K-12 and collegiate level sports that align with their gender identity.
Read more

The 40-year-old was taken ill while being transported to a custody suite, Lincolnshire Police say.
Read more

Will critical race theory be the new debate issue...

Manchester City: Pep Guardiola will not apologise for asking...

Pep Guardiola has said he will not apologise for calling on more Manchester City fans to attend their Premier League game with Southampton.
Read more

"Saturday Night Live" in this weekend’s cold open found one thing that could unite both Democratic and Republican senators  – they’re all too old to understand Facebook.
Read more

The body of a U.S. Army soldier stationed at Fort Campbell, Kentucky, was recovered Wednesday, one day after he did not resurface during a diver training exercise, according to reports.
Read more

Windows 10 just got an awesome new feature for...

Streaming console games to a Windows 10 PC just became a reality with a new update for the Xbox App.
Read more

US calls talks with Taliban ‘candid and professional’ following...

The US State Department said Sunday that this weekend's talks with representatives of the Taliban in Doha, Qatar -- the first such gathering since the US withdrawal from Afghanistan at the end of August -- were "candid and professional" while emphasizing that…
Read more

Dems punch back over GOP hold up of Biden...

The White House and congressional Democrats are punching back at GOP senators for blocking President Biden's nominee for deputy administrator of the Small Business Administration, who if confirmed would be the highe...
Read more

The Georgia Republican accused the Democratic Party of hating "our freedom" and "the Veterans who died defending it."
Read more

The former prime minister will be asked about his messages to ministers on behalf of the finance firm.
Read more

Demonstrators gather at Georgia Capitol to demand justice in...

Demonstrators gathered in Georgia to demand justice for the victims of the Atlanta shootings that left eight people dead, six of whom were Asian. Large...
Read more

Former President Donald Trump will visit the U.S.-Mexico border later this month as Republicans seek to cast a spotlight on the Biden administration's handling of immigration.Trump in a statement said he would join...
Read more

Global stocks higher after Wall St gain ahead of...

The attorney general has ordered a temporary halt to the DOJ advocating any scheduling of further executions of federal inmates, a DOJ official told ABC News.
Read more

The family of murdered New Orleans native and former U.S. Marine veteran Catherine Serou is attempting to retrieve her body from Russia after her alleged killer was identified and arraigned on Sunday.
Read more

How One Australian Coal Giant Turned China’s Ban Into...

China’s ban on Australian coal imports has proved a boon for Sydney-listed Coronado Global Resources Inc., one of the world’s top producers of the metallurgical variety that’s key to steelmaking.
Read more

Biden Is Holding as Many Immigrants in Private Prisons...

The American Civil Liberties Union published an op-ed in support of vaccine mandates taking the position that the mandates actually “further civil liberties” despite having publicly opposed such mandates before the coronavirus pandemic.
Read more

A new Fifa report says the Qatar 2022 World Cup is anticipated to produce up to 3.6 million tonnes of carbon dioxide.
Read more

Brazil in talks with US for extra coronavirus vaccine...

Brazil said Saturday it is in talks with the U.S. to potentially receive excess doses of coronavirus vaccines.Brazils' foreign ministry said that the talks began on March 13, though the U.S. has given no public ind...
Read more

The 10-time Grammy winner recorded more than three dozen studio albums. Some of his hits include "Like A Rolling Stone," "The Times They Are A-Changin’" and "Blowing in the Wind."
Read more

Texas Gov. Greg Abbott (R) and state Attorney General Ken Paxton (R) are asking an appeals court to strike down an order issued by Dallas County that would require residents to wear masks in schools and businesses....
Read more

Sinckler called up as Lions replacement for injured Porter

England prop Kyle Sinckler is called up to the British and Irish Lions squad for the tour of South Africa after an injury to Ireland's Andrew Porter.
Read more

Britain and Australia have announced the broad outlines of a free trade deal, eliminating tariffs on a wide range of goods as the U.K. seeks to expand links around the world following its exit from the European Union
Read more

House GOP prays Trump can kick his habit of...

As Republicans strategize with Donald Trump on how to retake the House in 2022, they worry his focus on false claims about the 2020 election will create an uncomfortable litmus test.
Read more

The prime minister of Hungary has brought his anti-immigration views to the Czech Republic, where a fellow leader has made migration a major campaign topic before the country’s general election next week
Read more

Biden challenges UN to act together on pandemic, climate...

The decision comes hours after the League announced it would postpone the five matches scheduled for this weekend in light of the allegations.
Read more

In an unusual North Korean parade that showcased military animals and virus workers in hazmat suits in place of ballistic missiles, leader Kim Jong Un still managed to seize the spotlight by looking thinner and more energetic than he has in years
Read more

The U.K. is calling on the European Union to show pragmatism and “common sense,” as the two sides meet to resolve differences over the implementation of their post-Brexit trade deal in Northern Ireland
Read more

An international conservation organization announced on Saturday that near...
Read more

After an unprecedented year that saw record numbers of women leaving the workforce, tech employees and advocates are urging the industry to continue its tradition as innovators and rethink workplace models to offer the fl...
Read more

The SNP calls the UK-Australia trade deal "disastrous" and claims it will see Scottish farmers and crofters "thrown under the Brexit bus".
Read more

The event should see the moon turn a coppery red color as it passes behind the Earth's shadow for a moment.
Read more

Will Tesla’s low-cost Model 3 be ready by Friday?

It comes days after an eruption killed 32 people and destroyed hundreds of homes around Goma.
Read more

Missing cat found after an extensive 6-year search by...

A lost cat has been reunited with its owner after six years.
Read more

A mom has warned parents to check their baby's toes and fingers after a strand of hair got wrapped around her son's digit, ending in surgery.
Read more

AstraZeneca Plc agreed to supply the U.S. with as many as half a million more doses of its Covid-19 antibody cocktail for $205 million.
Read more

Shaw Held Talks With Another Bidder Months Before Rogers...

Judge Sharon Gleason wrote that the exclusion of foreign greenhouse gas emissions in an alternatives analysis was "arbitrary and capricious."
Read more

Cavendish and Hayter in GB squad for Worlds

Rangers are linked with Dijon centre-half Senou Coulibaly as AC Milan prepare to offer Diego Laxalt to Celtic as part of a bid for Odsonne Edouard.
Read more

Qatar's public prosecution has charged a Kenyan man who has written about migrant rights in the Gulf Arab state with receiving payment to spread disinformation, the government's communication office (GCO) said on Saturday.
Read more

image caption About sharing Police had expected to find a cannabis farm but instead discovered about 100 computer units "mining" the cryptocurrency. A suspected Bitcoin "mining" operation illegally stealing electricity has been found by police who were searc…
Read more

Colonial Pipeline announced Tuesday that its internal servers were experiencing "intermittent disruptions," but stressed the problem was separate from the devastating ransomware attack that disrupted operations earl...
Read more

Roaring Kitty Has More in Common With Warren Buffett Than Reddit