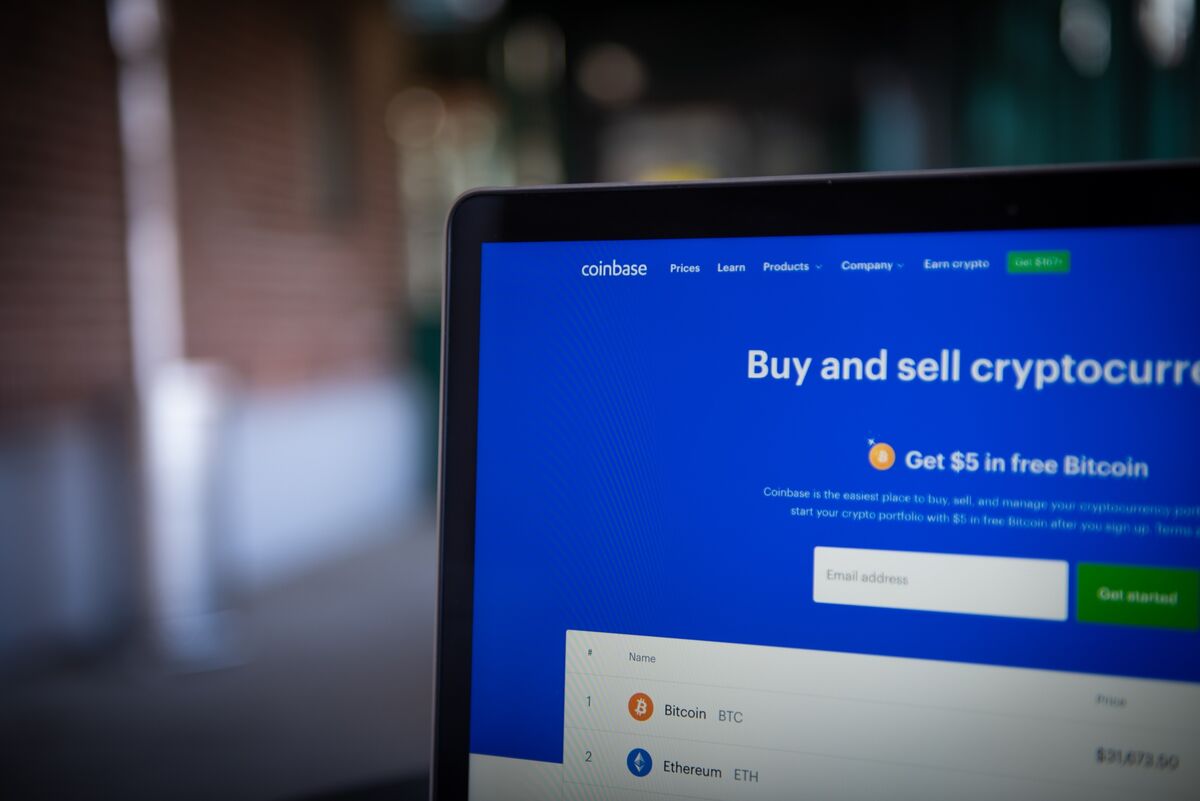 Coinbase Global Inc., the biggest U.S. cryptocurrency exchange, is now aiming to go public in April after its plans for a direct listing this month have slipped, according to people familiar with the matter who asked not to be identified because it was private.

The U.S. Securities and Exchange Commission has been reviewing the companys plans for a direct listing, an alternative to a traditional initial public offering.

This week, Coinbases backers registered for as many as 114.9 million shares to trade when the stock lists. In a direct listing, investors can begin selling their holdings as soon as a company starts trading rather than waiting for the expiration of a lockup period — typically up to six months in an IPO.

Investment firms including Andreessen Horowitz and

Union Square Ventures are among those whose shares could trade, according to a regulatory filing Wednesday. Chief Executive Officer Brian Armstrong and Coinbase co-founder Fred Ehrsam have also registered stock.

Coinbase shares have changed hands at $200 to $375.01 in private transactions this year, the filing shows. The volume-weighted average price per share for transactions from January through March 15 was $343.58, which would give Coinbase a public market valuation of about $67.6 billion, based on the total number of shares outstanding as of Monday. The fully diluted value — including employee incentive plans and restricted stock units — would be significantly higher.

The debut will be the first major direct listing to take place on the Nasdaq. All such previous listings were on the New York Stock Exchange, including those by Spotify Technology SA, Slack Technologies Inc., Asana Inc., Palantir Technologies Inc. and Roblox Corp., which listed this month.

Coinbases latest financial statements revealed that the company is making money, setting it apart from many other startups when they make their public debuts. Coinbase swung from a loss to a profit of $322 million last year on net revenue that more than doubled to $1.14 billion. Kate, 39, is "hugely grateful" after getting the jab at the Science Museum on Friday.
Read more

Amazon is launching an Apple Fitness Plus rival but...

Amazon Fitness undercuts Peloton and Apple on price, but its workout classes may not be unique enough.
Read more

A Closer Look At Markets, Focus On The Fed...

Securing the next phase: the Everywhere Workplace

The Everywhere Workplace is here to stay, but how will we secure it?
Read more

Sen. Maria Cantwell, a key senator overseeing the aviation industry, is pushing six US airlines to explain worker shortages, flight cancellations and delays after the government supplied billions in federal aid to the airline industry amid the Covid-19 pandem…
Read more

European diplomats say the latest round of talks over Iran’s nuclear program has made progress, expressing hope that agreement can be reached next week
Read more

“Covid-19 has shown a bright light on our own society’s failings,” he said during a commencement address.
Read more

Welcome to Friday's Overnight Energy & Environment, your source for the latest news focused on energy, the environment and beyond. Subscribe here:...
Read more

The UK economy grew just 0.1% in July as the last Covid restrictions were lifted in England.
Read more

GOP legislators don’t seem to be too concerned about what’s happening to their colleagues in the Grand Canyon State. But they should be.
Read more

India man jailed for killing wife with cobra in...

Sooraj Kumar let a cobra onto the bed where his wife was sleeping - she died from the snakebite.
Read more

Per a TMZ report on Wednesday, law enforcement and emergency responders received a call of a suicidal person at Scott’s home in Michigan on July 30. When they arrived, she allegedly became combative with personnel who were checking her vital signs and reporte…
Read more

The Philippines has approved the emergency use of Russia's Sputnik Light COVID-19 vaccine, the country's vaccine procurement chief said on Monday, making it among the first countries in Asia to approve the single-dose vaccine.
Read more

‘To get out there with a guide dog is...

Mel Griffiths and her dog Elsa took part in a walking challenge to raise money for charity.
Read more

Google could launch a new Chromecast this year

A mysterious new wireless streaming device from Google has appeared via an FCC listing, and could be an updated Chromecast model.
Read more

The announcement, which applies to vaccinated as well as unvaccinated people, will mark a sharp change in policy for the nation’s leading health agency.
Read more

New Mexico Seen Running Out of Legal Cannabis Once...

House progressives continue to threaten to sink the bill unless there's an agreement on the other, much larger package that expands the social safety net.
Read more

Who Is Pufferfish From ‘The Masked Singer’? All the...

The quirky guessing game is back with a new host of celebrity contestants desperately keeping their identity a secret to win "The Masked Singer."
Read more

Sen. James Lankford, R-Oklahoma, a member of the Senate Intelligence Committee, discusses the questions he has about the deadly raid in Niger that killed four American service members.
Read more

Samsung has announced an offer giving £200 worth of app access to new TV customers.
Read more

Airline pilot speaks out against vaccine mandate: ‘Choice is...

Commercial airline pilot Shawn Walker is standing up against his employer's vaccine mandate that he considers an "ultimatum." He could lose his job in November if he is not vaccinated, but he believes his career is a small sacrifice to maintain freedom over p…
Read more

SMBs are being held back by unwillingness to talk...

Many small business owners think they come off as rude if they remind clients and customers of late payments.
Read more

Back 4 Blood beta kicks off with Nvidia DLSS...

Another high-profile release gets the benefit of DLSS, with closing on 60 games now supported.
Read more

An ex-royal court chief and a minor royal are jailed for 15 years after being convicted of sedition.
Read more

Morocco trapped in Guinea as qualifier postponed by apparent...

Guinea's match against Morocco - whose squad are still in Conakry - is postponed, as Namibia beat Togo and Kenya hold Rwanda.
Read more

Sunderland win at Wembley for the first time in almost 50 years as they beat Tranmere Rovers to claim their first-ever EFL Trophy.
Read more

Live bats at Wuhan lab ‘not a conspiracy’ but...

The U.S. Navy on Monday was forced to fire warning shots several times after a group of 13 Iranian ships harassed the American vessels in the Strait of Hormuz, the largest such encounter in more than a year, according to...
Read more

Who benefits? US debates fairest way to share spare...

India’s Lenskart, an online retailer for eyewear, raised $220 million from investors including Temasek Holdings Pte and Falcon Edge Capital, in another sign of booming interest in the country’s technology startups.
Read more

I did all I could, says Spieth, after Open...

Jordan Spieth said he had done everything he could to end his long wait for a fourth major after falling just short in a thrilling final day of the British Open on Sunday.
Read more

Iolo Search and Recover may appear to be outdated, but this data recovery program still gets the job done.
Read more

California Democratic challenger says he was barred from entering...

A California Democrat vying to unseat Gov. Gavin Newsom says he was barred from entering a campaign event that portrayed the recall effort as a Republican stunt.
Read more

John McGregor, 44, died in hospital two days after he was shot in the Milton area of the city last month.
Read more

US gymnast Simone Biles says she is still struggling with the 'twisties', raising doubts about whether she will compete in the apparatus finals.
Read more

Confiscatory tax policies make citizens worse off overall in the name of redistributing resources from the wealthy to the poor.
Read more

Illinois Senator Mark Kirk is apologizing after an open mic caught an off-color comment about Senator Lindsey Graham's luck with the ladies. CBSN's Jeff Glor has the controversy.
Read more

Biden’s toughest test on economic inequality will be reinvigorating...

Xbox Series S is now a real threat to...

Microsoft’s Xbox Series S could become a lot more popular in the near future, and might even put pressure on the PS5.
Read more

Obama lays Memorial Day wreath on Tomb of the...

Hurricane watch in effect for New Orleans as Ida...

"By Saturday evening, everyone should be in the location where they intend to ride out the storm," said Louisiana's governor.
Read more

A Shift Just Happened in the Ethereum-Bitcoin Ratio

Mayors from the biggest English cities up and down the country urged U.K. Prime Minister Boris Johnson to stop people on public transport from traveling without a face masks.
Read more

Will Rogers threw for 408 yards and three touchdowns and Nathan Pickering sacked Zach Calzada in the end zone late for a safety in Mississippi State's 26-22 victory over No. 15 Texas A&M on Saturday night.
Read more

Turn up the grill: Weber off to a hot...

Walt Disney Co. said it has taken in $125 million in online revenue from Black Widow and said the picture, which prompted a...
Read more

FBI vs. Clinton rattles markets, and other MoneyWatch headlines

Halo comes to your car with Master Chief as...

Microsoft has partnered with Google to bring a variety of Halo-themed features to navigation app Waze.
Read more

So far, top Republicans are staying quiet about the Sept. 18 protest on the Hill in defense of some Capitol riot defendants.
Read more

Aramco Likely to Partner With China on Blue Hydrogen,...

Saudi Aramco plans to “expand and intensify” its cooperation with China on research in areas including hydrogen and ammonia production from natural gas, according to the company’s President and Chief Executive Amin Nasser.
Read more

Pentagon: US troops must get their COVID-19 vaccines ASAP

Super Group is to combine with Sports Entertainment Acquisition Corp. to create a New York Stock Exchange-listed global gaming company, according to a...
Read more

The airline tells staff the ending of the government scheme will be "bad news" for its costs.
Read more

Ukrainian troops struggle to take back control from pro-Russia separatists