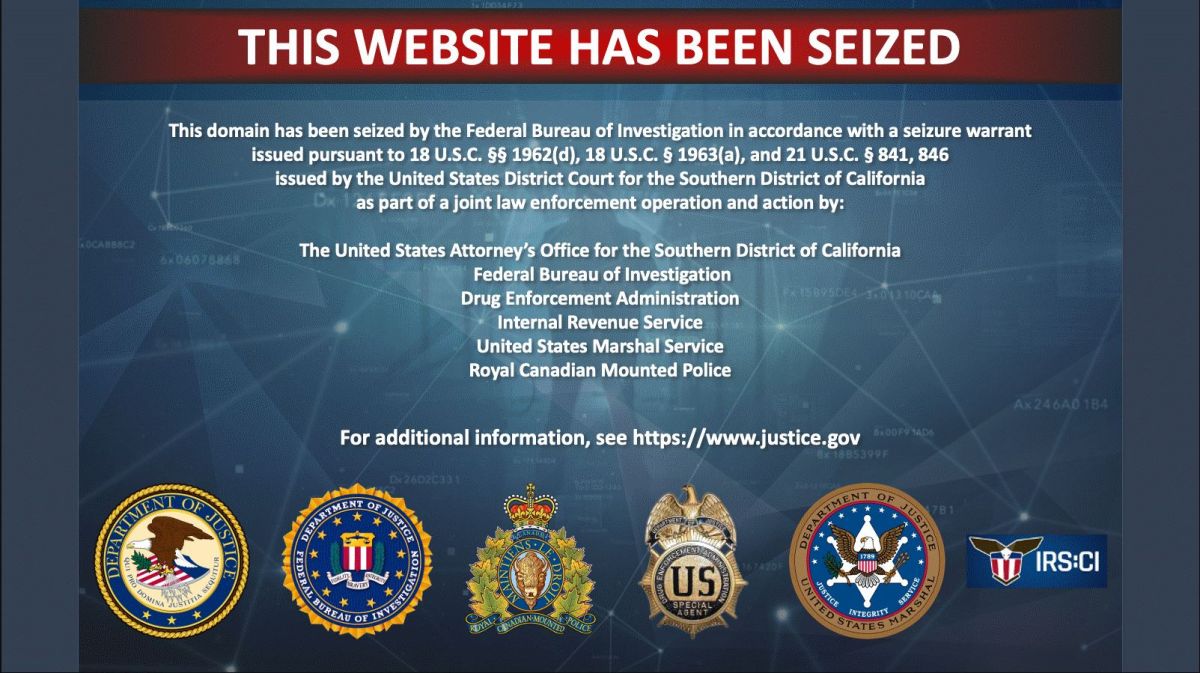 The encrypted phone service Sky Global has shut down its operations after BlackBerry cut off the firm’s access to its United Endpoint Manager services.

The shut down comes after Sky Global’s CEO Jean-Francois EAP was recently indicted by the Department of Justice alongside a former distributor of encrypted smartphones for selling devices to international drug traffickers to help them avoid being detected by law enforcement.

“Sky Global’s devices are specifically designed to prevent law enforcement from actively monitoring the communications between members of transnational criminal organizations involved in drug trafficking and money laundering. As part of its services, Sky Global guarantees that messages stored on its devices can and will be remotely deleted by the company if the device is seized by law enforcement or otherwise compromised.”

Just like with the subscription-based phone system EncroChat that was shut down last year, Sky Global provided criminals with modified Nokia, Google, Apple and BlackBerry smartphones that had their cameras, microphones and GPS capabilities removed to make them harder to track.

Once a criminal purchased one of the company’s modified devices, they would then sign up for its end-to-end encrypted messaging software Sky ECC that came preinstalled on its smartphones.

As first reported by MotherBoard, Sky Global’s website has been seized by US and Canadian authorities and it now displays an official government banner complete with the logos of the FBI, DEA, US Marshals Service and the Royal Canadian Mounted Police.

However, before Sky Global’s operations and site were shut down, a final message went out to the company’s customers warning them that their communications could soon be intercepted by law enforcement.

While Sky Global is no more, another encrypted phone service will likely rise up in its place due to how profitable supplying criminals with untraceable phones can be. For a third time, the Supreme Court rejected a Republican challenge to kill the Affordable Care Act. Jan Crawford has more.
Read more

A Danish firm says its plans for 10 floating turbines off the Caithness coast would be the world's largest.
Read more

Lava flow from Spanish island volcano likened to a...

Biden to outline efforts to combat crime, with focus...

President Biden on Wednesday will lay out his administration's agenda to cut down on crime, with a particular focus on addressing gun violence as action in Congress remains elusive.The president will deliver remark...
Read more

Here’s when NASCAR is probably switching to hybrids

NASCAR could ad an electrified powertrain to its Cup Series cars in 2024, according to series President Steve Phelps. The hybrid system would combine an electric motor with the car's V8.
Read more

Bangkok closed down its remaining open public spaces on Friday after coronavirus infections began to surge in the region.According to The Associated Press, public spaces including parks, hair salons, and barbershops were officially closed....
Read more

The International Energy Agency said in a report Tuesday that even as carbon dioxide emissions are set to hit a record high in 2023, international governments are set to only put 2 percent of their COVID-19 recovery spend...
Read more

Democratic Texas state legislators were slammed on social media for a photo showing them maskless and smiling on a flight to Washington, D.C., in an effort to block a Republican voting bill.
Read more

A fairy tale in Denmark: How an unforgettable night...

How an emotional night in Copenhagen unfolded as Denmark reached the last 16 of Euro 2020.
Read more

Arrest made in connection with LA wildfire

One person is in custody and is reportedly being treated for smoke inhalation in connection with a wildfire in California's Napa County, authorities said at a press conference Monday....
Read more

Do You Say Happy Memorial Day? The Debate Over...

Some feel pairing "happy" with "Memorial Day" misses the point of the holiday, but others see it as an acknowledgment of what servicemembers gave their lives for.
Read more

Younger fans can attend games at Madison Square Garden, but if they have no proof of vaccination, they must wear masks while they aren't eating or drinking.
Read more

The driver, who was 17 at the time, failed to stop after hitting a father-of-two in Dundee in 2018.
Read more

The clinic, which authorities have since shut down, was not authorized to perform any surgical procedures.
Read more

Malaysian authorities took to steamrolling just over 1,000 illegal crypto mining rigs to prove a point that it is illegal to siphon off critical electricity to make fake internet money.
Read more

"Where the military goes, the civilian world often follows," says one influential player helping to shape the policy.
Read more

Headphones deal: save £110 on these excellent noise-cancelling cans

You can save big on these stellar noise-cancelling headphones from Jabra in Amazon's Spring Sale.
Read more

The sister of journalist Lyra McKee has spoken of her grief on the second anniversary of her death.
Read more

Every day, CNN Underscored strives to bring you a smattering of the best deals to shop on the internet, from discounted tech to home goods to fashion — not to mention our 24/7 coverage of the biggest days in shopping, like Amazon Prime Day and Black Friday.
Read more

Why some employees are facing difficulties in obtaining medical...

As more U.S. businesses require employees to be vaccinated, many Americans are now seeking medical exemptions. CBS News' Megan Cerullo joins Lana Zak on CBSN to discuss what kind of health condition could excuse an individual from getting the COVID-19 vaccine.
Read more

Houston police are searching for a man, who is out on bond in a murder case, after his pet tiger was seen prowling a front yard. Mola Lenghi reports.
Read more

Cardona says civil rights probes may be launched over...

Education Secretary Miguel Cardona on Sunday said he is "prepared to launch investigations" with the department's Office for Civil Rights in response to states that have implemented bans on mask mandates for student...
Read more

Andretti entering F1 would be a logical move, says...

U.S.-based Andretti Autosport would be a great addition to Formula One if reported takeover talks with Sauber come to fruition, according to Aston Martin's billionaire Canadian owner Lawrence Stroll.
Read more

U.K.’s Johnson to Urge Caution as Covid Restrictions Are...

Refugees in fear as sentiment turns against them in...

The second one-day international between Australia and West Indies has been called off after the toss because of a positive Covid-19 case.
Read more

Nassau Coliseum was roaring with energy Wednesday night as fans in attendance belted out the National Anthem before the New York Islanders Game 6 victory over the Boston Bruins in a viral moment that is sure to give anyone chills.
Read more

Next expects post-lockdown sales surge to be short-lived

The fashion chain raises its profit forecast but says the recent rebound in sales may not last.
Read more

Cavers descend into Yemen’s ‘Well of Hell’ for first...

The 112m-deep pit has long been shunned by many local people, who believe it harbours genies.
Read more

His name is Rembrandt van Rijn, the most famous 17th century Dutch painter and one of the great artists of all time. And you can see him in all his glory in a stunning new exhibition at the Museum of Fine Arts in Boston. It is called "Rembrandt's Journey: Pai…
Read more

Biden’s gambling on another death tax to fund his...

The rout for the largest cryptocurrency continued on Wednesday, with Bitcoin erasing all of its gains since Tesla Inc.’s Feb. 8 announcement that it would use corporate cash to buy the asset and accept it as a form of payment for its vehicles -- only for foun…
Read more

President Biden has been briefed on a plan which would end the expulsions of migrant families at the border by July 31, ...
Read more

As two Canadians mark 1,000 days in separate Chinese prisons, their supporters are marching Ottawa to push for their freedom
Read more

Welcome to the Hyperdrive daily briefing, decoding the revolution reshaping the auto world, from EVs to self-driving cars and beyond. Click here to subscribe.
Read more

The majority of Republicans and Democrats agree that health care aides and nurses are underpaid, according to a new study by the University of Chicago Harris School of Public Policy and The Associated Press-NORC Center fo...
Read more

Despite a fall, borrowing was still the second-highest on record for July as Covid spending continues.
Read more

President Joe Biden said in an interview aired Tuesday that Democratic New York Gov. Andrew Cuomo should resign if an investigation confirms the allegations of sexual harassment against him.
Read more

Mosul landmark mosque to be rebuilt by Egyptian architects

"Vile and unacceptable" online abuse received by Yannick Bolasie is condemned by Middlesbrough and his parent club Everton.
Read more

Taiwan has reported a record number of incursions by Chinese warplanes into its air defense identification zone (ADIZ) for the second day in a row, Taiwan's Ministry of National Defense said on Saturday night.
Read more

The move marks a reversal of the administration’s original plans to share 60 million doses of AstraZeneca’s vaccine, which has not yet been cleared for use in the U.S.
Read more

President Biden on Thursday said negotiating the assault weapons ban of 1994 was more difficult than current deliberations for the bipartisan infrastructure bill and reconciliation package, as the White House and Capitol Hill near the end of months-long negot…
Read more

Maddie Durdant-Hollamby's parents says they will never learn why she was murdered by her partner.
Read more

Startup Hopin Said to Seek Funds at More Than...

Hopin Ltd. is seeking fresh funding that values it at more than $7 billion, according to people familiar with the matter.
Read more

Lewis, who was charged as an adult, pleaded guilty in September to to second-degree murder and first-degree robbery.
Read more

Sgt. Darren Moss Jr., with the Pierce County Sheriff's Department in Washington state, said on Sunday that officers have been “unclear on whether they’re going to be OK to use force” in certain situations given the new police reform law and have been advised …
Read more

Amazon settles with employees who were found to be...

Amazon has settled with two employees who were found to be illegally fired by the company, The Washington Post reported.Earlier this year, the National Labor Relations Board found that the two employees — Emily Cunningham and Maren Costa — had been...
Read more

The Prospect union announces a 29 July strike over Hial's plans to control air traffic from a central hub in Inverness.
Read more

Republican Gov. Mike DeWine has announced the end of coronavirus health orders in Ohio as of June 2
Read more

The campaign is in response to the death of a 17-year-old girl at Leeds in 2019.
Read more

‘We’re in a sprint here’: The Space Force struggles...

As it approaches its third year, the newest military branch works to get out of the Air Force's shadow.
Read more

India legend Sachin Tendulkar is released from hospital a week after he was admitted with Covid-19.
Read more

Don't Think Fed Will Let Inflation Get Out of Control: Krugman