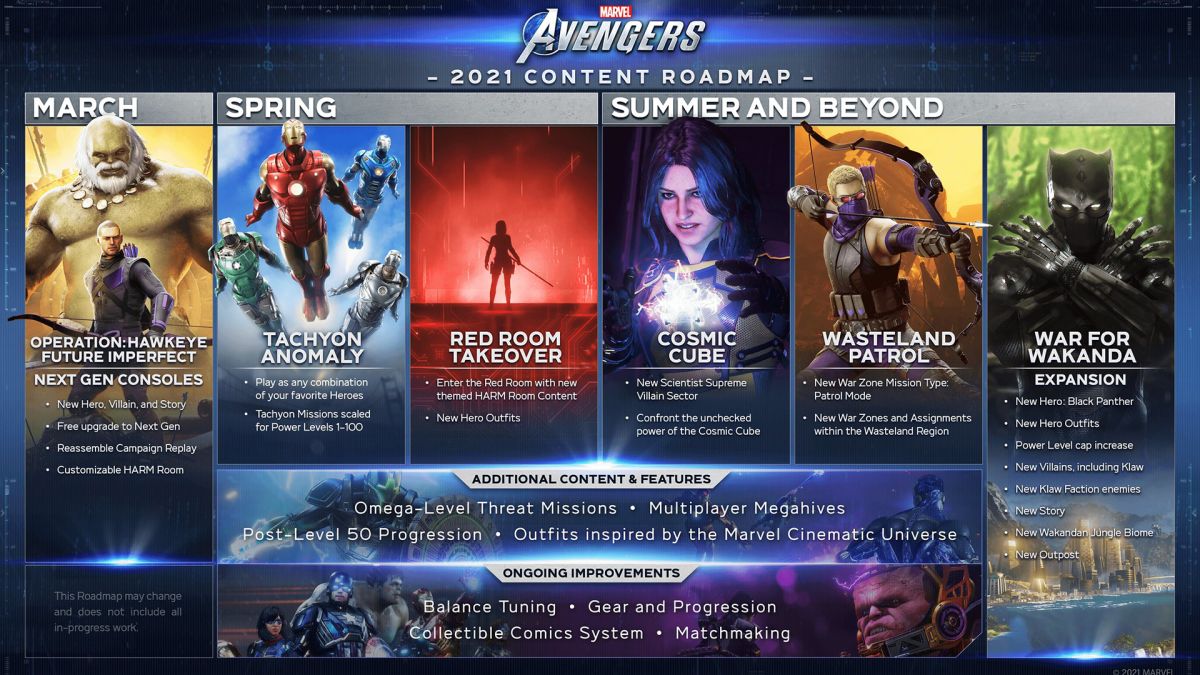 Crystal Dynamics has shared in a blog a host of things that are coming this year in the roadmap for Marvel’s Avengers. This includes new heroes, costumes, storyline, and villains.

To start off, the new operation called Operation: Future Imperfect is introducing Hawkeye who joins as a playable character. His story will take players to a new biome called the Wasteland, which is infested with enemies including a new one called Cargo Runner Synthoid. A new villain called Maestro will also join them. Maestro is a twisted Hulk from an alternate timeline who has “Bruces wits and the Hulks power.”

Marvels Avengers also supports the PlayStation 5 consoles improved 3D audio technology. And with compatible headphones, players can hear the fight all around them with the PS5 consoles Tempest 3D AudioTech.

As for the things that are coming to the game in the future, players will see the inclusion of new Villain Sectors like a battle against Monica, mission types, events, and Black Panther and the War for Wakanda expansion. This expansion will bring Black Panther as a new hero, with new hero outfits, along with an increase in the current power cap.

A new villain will be joining the cast with this expansion in the future called Klaw, whose voice can be heard in the trailer. There will be new Klaw faction enemies, new storyline, as well as a new biome for the Wakandan Jungle, which can be accessed from a new outpost. Burnley manager Sean Dyche acknowledges the difference in spending power between his side and opponents Newcastle United after their 2-1 loss.
Read more

In many places, GOP strategists and party mandarins find themselves in the unenviable position of having to root out the candidates who are merely mimicking the former president's style and positions to win votes to earn an endorsement.
Read more

"CBS This Morning" takes a look at today's headlines from around the globe.
Read more

The publication of the studies comes a week after the agency released its first three reports on vaccine efficacy.
Read more

A Fort Hood solider assigned to the 1st Cavalry Division was found dead behind his barracks over the weekend.
Read more

The case of two Vermillion, South Dakota girls who disappeared in 1971 finally came to a close after their car was found submerged in a creek. KMEG's Joe Bisaccia reports authorities revealed the disappearance was the result of an accident - not foul play.
Read more

The appeal says the judge was biased because he attended the church Tarrio took a Black Lives Matter sign from before burning it.
Read more

As the first full FDA approval is granted to a Covid-19 vaccine, Dr. Anthony Fauci urged the public to take part, saying if the "overwhelming majority" of the population gets vaccinated, the US could have the pandemic under control by spring of 2022.
Read more

Fake streaming sites were the biggest threat of the...

Cybercriminals targeted users trying to stream the Olympics online to infect them with malware and steal their credentials.
Read more

Ross MacDougall and Dawn Smith were jailed for 23 and 20 years but appeal judges found the terms excessive.
Read more

Watch as Mikel Oyarzabal scores the winning penalty to help Spain advance to the semi-finals of Euro 2020 defeating Switzerland 3-1 on penalties.
Read more

"The targets were selected because these facilities are utilized by Iran-backed militias that are engaged ... against U.S. personnel and facilities in Iraq," the Pentagon stated.
Read more

The plan contains money for a smorgasbord of interests, from roads to the power grid.
Read more

Arsenal winger Beth Mead says she is using the disappointment of missing out on the Olympics as motivation for performances this season.
Read more

Jeremy Stephens and Drakkar Klose's UFC Fight Night co-main event was called off on Saturday after Klose says he suffered a neck injury after being pushed by Stephens during the weigh-in.
Read more

An Ohio man pleaded guilty on Wednesday to a conspiracy in which federal prosecutors say he laundered more than $300 million of Bitcoins generated through drug trafficking and other illicit activities.
Read more

Add Worker Shortage to a Long List of Food...

Milkshakes are missing from U.K.’s McDonald’s branches, tomatoes are rotting on Italian farms, and soldiers mingle with farmers on Vietnam’s rice paddies. All because of shortage of staff.
Read more

Gary Allen, who killed Samantha Class in 1997 and Alena Grlakova in 2018, must serve at least 37 years.
Read more

New York City high schools reopened on Monday for the first time since November for thousands of students who opted for in-person learning. The U.S.'s largest school district was expected to welc...
Read more

Boxer Youness Baalla attempts to bite his opponent David Nyika during their last-16 fight at the Tokyo Olympics.
Read more

The Gender Pay Gap Is Just as Wide as...

The Gender Pay Gap Is Just as Wide as Ever in Pandemic Year that Crushed Womenbloomberg.com
Read more

Thousands of recipients of the Deferred Action for Childhood Arrivals program (DACA) are reportedly trying to keep or renew their permits to remain in the U.S., but the process has stalled because of a backlog of ap...
Read more

The search for a new Ambassador has remained a long-standing tradition for Disney Resorts ever since it was introduced by Walt Disney himself back in 1965. As the 2022-23 selection process continues around the world, the six finalists here at Hong Kong Disney…
Read more

4 people are killed in a plane crash near...

A single-engine plane crashed and caught fire on Friday during takeoff at an airport just northeast of Atlanta, according to the Federal Aviation Administration.
Read more

Mexican Open: Cameron Norrie and Jamie Murray both through...

Inside the FBI cellphone scheme that took down gangs...

A "couple of beers" between U.S. and Australian law enforcement officials morphed into a sprawling, sophisticated international criminal underworld takedown that thwarted dozens of murders, netted a mountain of drugs and led to more than 800 arrests, authorit…
Read more

A group of police officers filed a lawsuit against a Californian city over a mural that they said contained anti-police images.According to ...
Read more

The department's civil rights office will examine whether bans in Iowa, Oklahoma, South Carolina, Tennessee and Utah violate the rights of students with disabilities.
Read more

One of Skyrim’s weirdest, oldest mysteries has been solved

Harvard University has said that it will return a tomahawk that belonged to Chief Standing Bear to the Ponca tribe of Nebraska, ...
Read more

Covid-19: Happy clubbers as rules end in Wales, and...

The Producer Price Index, a measure of how much producers have to pay for their materials, rose a seasonally adjusted 0.6 percent in April, roughly double the amount that economists had expected.Compared to last Ap...
Read more

Hyperdrive Daily: Xiaomi and the Ghost of EVs Past

Welcome to the Hyperdrive daily briefing, decoding the revolution reshaping the auto world, from EVs to self-driving cars and beyond. Click here to subscribe
Read more

Vice President Kamala Harris should consult members of Congress as she continues discussions with Mexican and Central American officials on the "root causes" of migration, a Republican lawmaker urged this week.
Read more

Jeff Sims was really upset for a few days. Then he pulled himself together and waited for another chance.
Read more

After saying ‘I’m Going to Disney World,’ Brady did...

After facing off against the Kansas City Chiefs’ defense, Tampa Bay Buccaneers quarterback Tom Brady had no problem taking a lightsaber to Star Wars’ Kylo Ren and a unit of storm troopers
Read more

The Mavericks were led by Tim Hardaway Jr., who scored 21 of his 30 points in the first half. Jalen Brunson, starting for Doncic, added 24 points.
Read more

The Economy Is Shrinking for Women. That’s Why We...

This month's jobs data is a timely reminder that there is no economic recovery without women.
Read more

Feds provide $7.4B for public health; school nurses in...

Convicted murderer Robert Durst has COVID, is on ventilator...

Real estate heir Robert Durst, who was sentenced this week to life in prison for murdering a friend in 2000, has COVID and is on a ventilator, his lawyer told the Los Angeles Times.
Read more

The two moderates may try to slash down their party's ambitions. But as one Republican put it: "What’s down? $100 million? $1 trillion?”
Read more

A leak suggests that Samsung has two wearables landing shortly, and has revealed the likely sizes.
Read more

The European Union’s top court has ruled that Germany “systematically and persistently” exceeded limits on nitrogen dioxide, a harmful gas produced by diesel engines, in many regions between 2010 and 2016
Read more

"No one has worked harder to deal with the violence by individuals using weapons than I have,” Biden said.
Read more

Here’s the latest news from the global pandemic:
Read more

Nicaraguan police arrested opposition candidate Felix Maradiaga on Tuesday, the third opponent of President Daniel Ortega to be detained in the last week as the nation prepares to hold an election in November.
Read more

A party-line vote was expected to be the best vote Colin Kahl could achieve with GOP resistance to his nomination.
Read more

Covid in Scotland: ‘I’ve never really had the chance...

The past year has been difficult for young people going out into the world during a pandemic.
Read more

The author of the bestseller "A Gentleman in Moscow" returns with a period story of four youngsters who embark on an epic journey from Nebraska to New York City.
Read more

Cambodia: The autistic teenager jailed over a Telegram post

OnePlus phones to switch to Oppo’s ColorOS – in...

OnePlus is closing down development for HydrogenOS and is going to switch all the current and future phones to Oppo's ColorOS.
Read more

Search in Mexico hill collapse slowed by fears of...

Fears of new landslides are slowing the search for more victims from the collapse of a hillside that brought tons of boulders down on a neighborhood outside Mexico City, killing at least one person
Read more

iPad exclusive: My dad, my hero

Robert Cline's 14 year-old son, Eric, shares personal family photos with "48 Hours" correspondent Peter Van Sant and talks about what life has been like since his father's death.
Read more

Psaki grilled on whether Biden created vaccine hesitancy with...

Gwen Berry on if she would protest on Olympic...

Olympic athlete Gwen Berry made headlines by protesting during the national anthem last month after qualifying for the games. As to whether she would do the same if she made it to the Olympic podium, Berry said only time will tell.
Read more

The United States has surpassed 35 million recorded COVID-19 cases, according to a Johns Hopkins University tracker, as the delta variant spurs a new rise in ca...
Read more

Vice President Harris said that issues of human rights and political dissent were discussed with government officials during her visit to Vietnam, adding that the U.S. will not shy away from difficult conversations with t...
Read more

Officers are trying to identify the person who was found in Bathgate, West Lothian, early on Thursday.
Read more

Custard to be reinstated in Aberdeenshire after school petition

Aberdeenshire pupils took action to reinstate their favourite puddings, described as the "best in the world".
Read more

Micromax In 1 with 48MP triple-camera launched in India