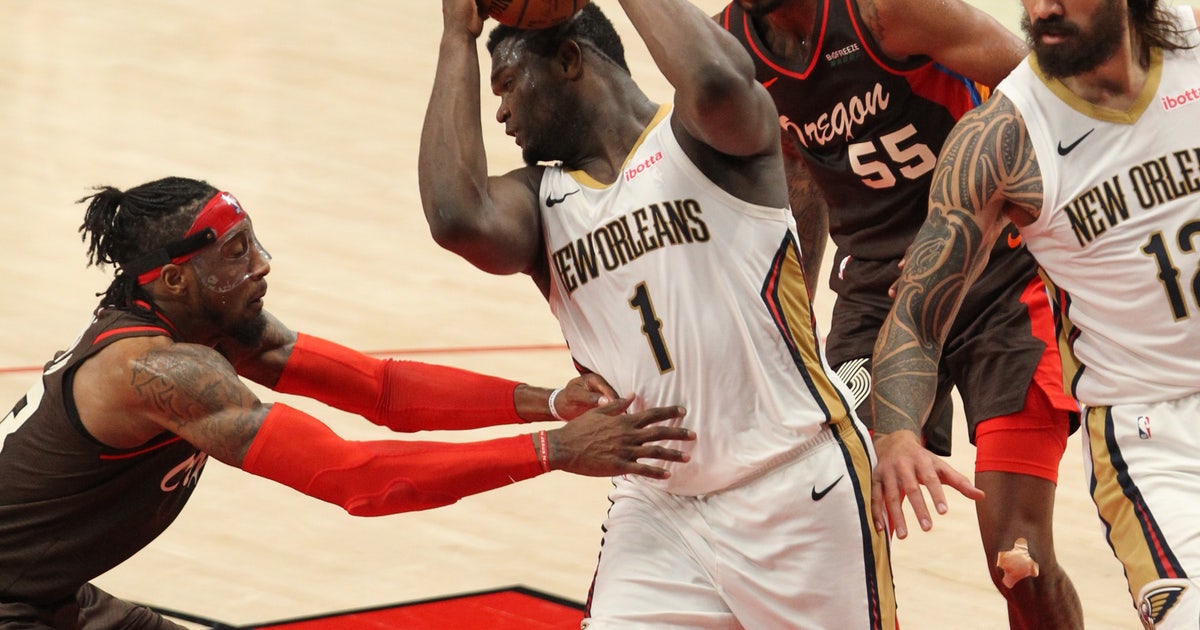 Carmelo Anthony added 15 points for the Blazers, who also edged the Pelicans 125-124 on Tuesday night. Enes Kanter finished with 16 points and 13 rebounds.

Zion Williamson had 26 points and 10 rebounds for his 10th double-double of the season for New Orleans.

Anthony’s 3-pointer gave the Blazers an 86-72 lead early in the fourth quarter for their biggest advantage of the game to that point.

Lonzo Ball’s floater pulled the Pelicans within 88-83 with 4:13 left. Robert Covington answered with a 3-pointer for the Blazers.

Williamson’s dunk with 1:20 to go narrowed it again to 94-89 but the Pelicans couldn’t catch up in the end.

On Tuesday, Portland trailed New Orleans by 17 points midway through the fourth quarter, but made up the deficit and won it on Lillard’s free throws with 1.2 seconds to go. Lillard finished with a season-high 50 points and 10 assists, and was 18 for 18 from the line.

On Thursday he picked up where he left off, with 15 of the Blazers’ first 20 points. He had five of his six 3-pointers in the opening quarter as Portland built a 31-23 lead.

CJ McCollum, who returned Tuesday from a fractured left foot, had back-to-back 3-pointers to put Portland up 42-33. The Blazers led 57-48 at the half.

Williamson’s dunk got the Pelicans within 59-53 early in the third but Lillard’s floater pushed Portland’s lead to 75-62.

Portland has won six of its last eight games and completed a sweep of the three-game season series.

Trail Blazers: Lillard has more than 16,000 points, joining Kevin Durant and LeBron James as the only players with as many points in their first nine NBA seasons. … Terry Stotts is two wins away from his 500th career victory.

Trail Blazers: Host the Dallas Mavericks for a pair of games on Friday and Sunday. "I don't know any tech company that sets out to build products that make people angry or depressed," Zuckerberg said.
Read more

Jorge Sampaio, former president of Portugal, died on Friday at age 81.Sampaio was admitted to the hospital in late August for breathing difficulties, Reuters ...
Read more

Resident Evil movies ranked – which is the best...

The Resident Evil movies are incredibly campy, action-packed and just plain fun, and I went ahead and ranked all of them after watching them all in a single day. This is my story.
Read more

Canoeist dies in accident on River Tweed near Kelso

Emergency services were called out to reports of someone getting into difficulties near Kelso.
Read more

A Dallas man pleaded guilty to a federal hate crime charge for targeting gay men on dating apps, according to a statement from the Justice Department.
Read more

Norway’s Karsten Warholm ripped his shirt in celebration as he broke his own world record in the 400-meter hurdles on Tuesday at the Tokyo Olympics.
Read more

Cuba’s president admits to shortcomings; takes some blame for...

Cuban President Miguel Díaz-Canel, who days ago called on revolutionaries to counter anti-government protesters in the streets, acknowledged government shortcomings in the lead-up to protests that broke out across the country.
Read more

Democrats go down to the wire with Manchin

Democrats are scrambling to lock down Sen. Joe Manchin (D-W.Va.) ahead of a Tuesday vote on one of the party's top priorities: A sweeping election reform bill.Democrats want to be able to put up 50 votes to advance...
Read more

Yellen Appeals to Wall Street CEOs for Help With...

Treasury Secretary Janet Yellen called the leaders of Wall Street’s largest financial firms in recent days to enlist their help in her campaign to pressure Republicans to support raising or suspending the debt ceiling, according to people familiar with the ma…
Read more

A Miami condo has been deemed unsafe and its residents have been ordered to evacuate the building.Officials posted an evacuation notice on the eight-story building Monday forcing hundreds of resi...
Read more

Netflix requiring US casts, crews to be vaccinated

Netflix on Wednesday became the first major Hollywood studio to announce a requirement for all casts and crews of U.S projects to be vaccinated against COVID-19 as the highly transmissible delta variant has fueled n...
Read more

President Trump's comments on the resignation of former National Security Adviser Gen. Michael Flynn seemed to confirm he and the intelligence community are still at odds. Republicans and Democrats are calling for investigations into Flynn's firing, but they …
Read more

Scott Gottlieb, former head of the Food and Drug Administration (FDA), said Monday that there is growing circumstantial evidence suggesting that COVID-19 may have originated in a lab and not in nature....
Read more

The SNP leader wants trade to flow freely between Scotland and England if an independent Scotland re-joins the EU.
Read more

A Russian actor and a film director making the first move film in space returned to Earth on Sunday after spending 12 days on the International Space Station (ISS).
Read more

A social enterprise has opened up shop in Glasgow to encourage communities to repair and reuse their possessions.
Read more

Reporters weigh in on field of Republican candidates

This new cheap Nokia phone has 5G and an...

The Nokia G50 seems designed for fans of streaming services; it has 5G, a giant screen and a low price.
Read more

12 Hong Kong activists, including a former party leader and the former head of the city’s biggest protest group, have pleaded guilty to charges related to a vigil last year to commemorate the Tiananmen Square crackdown. Bloomberg's Chloe Lo has the latest (So…
Read more

The American Academy of Pediatrics is recommending that children above the age of two wear masks when they return to school, even those who are vaccinated. This is causing public confusion as the CDC has said that vaccinated students do not need to wear masks…
Read more

It’s Halloween Time at the Disneyland Resort, and the Downtown Disney District is a bubbling cauldron of exciting seasonal things to do, sights to see, shopping to explore and treats to discover! Make no bones about it, you’ll want to carve out time to join u…
Read more

Google wants to make sure you never forget a...

The measure was sent to Florida Governor Ron DeSantis, a Republican, as new protests erupted this week in a Minneapolis suburb after another fatal police shooting of a Black man.
Read more

Everyone Loves the $100M Deli

Detectives are investigating whether the shooting was linked to a fight on Leyton High Road.
Read more

The best photos from the 2021 Tony Awards

The Tony Awards are taking place in New York on Sunday night, more than two years after the last award ceremony. The show, which honors the best on Broadway, was postponed last year because of the Covid-19 pandemic.
Read more

When Chris Therien lost his sister in 2006, Luke Richardson was one of the first people there for support. Therien repaid that in 2010 when Richardson's daughter Daron died by suicide at the age of 14.
Read more

As William Shatner prepares to be beamed up at age 90 for his first real-life space flight, he’s bringing out the awe in people around a rural Texas spaceport
Read more

The New England Aquarium last week agreed to let in a visitor who presented a ticket that was 38 years old but which specified that it allowed for a return visit "at anytime in the future."Rachel Carle's great-aunt...
Read more

EXPLAINER: Why and how the UK is experiencing a...

The U.K. is experiencing its fifth day of fuel shortages, with supply hobbled by a shortage of truck drivers
Read more

Anheuser-Busch will buy you a beer if U.S. reaches...

The largest beer company in the United States is offering all American adults a drink – if more than 70% get at least partially vaccinated.
Read more

Weisselberg spotted going back to work at Trump Tower

Trump Organization chief financial officer Allen Weisselberg was spotted going back to work at Trump Tower on Tuesday after being indicted by New York prosecutors on over a dozen tax-related ch...
Read more

The Zika virus continues to spread in South Florida. Five cases of the virus have been reported in Miami Beach. CBS News correspondent David Begnaud joins CBSN on the phone to discuss.
Read more

A soccer match between Germany and Netherlands has been called off in Hannover, Germany, due to security concerns. CBSN's Vladimir Duthiers reports.
Read more

Bryson DeChambeau and Brooks Koepka, who have had a recent feud, are kept apart for the first two rounds of the US Open at Torrey Pines.
Read more

Crews battle through fire and smoke as Surfside, Florida,...

A fire burning in the wreckage of the deadly building collapse in Surfside, Florida, was hampering search efforts for survivors. Part of the 12-story building collapsed early on Thursday morning. Rescuers have found only a few survivors since the residential …
Read more

Connah's Quay Nomads retain the Cymru Premier title with a 2-0 victory at Penybont on the final day of the regular season.
Read more

The CEO said that the company paid the ransom to prevent any negative impacts on restaurants, grocery stores and farmers.
Read more

London (AP) -- The NFL selected the cities Düsseldorf, Frankfurt and Munich on Tuesday to enter a final bidding stage to host a regular-season game in Germany.
Read more

More Than Half of N.Y. Adults Have at Least...

More than 50% of New Yorkers who are 18 years and older have received at least one dose of the Covid vaccine, Governor Andrew Cuomo said Thursday, in a statement.
Read more

Alan Hutton: Rangers’ Nathan Patterson should go to the...

Nathan Patterson can be the first-choice right-back for both Rangers and Scotland for years to come - but his time for international football is now.
Read more

Seats, Schleswig and an ex-spy: here are some of the sidelights from Sunday's vote.
Read more

The U.S. Department of Homeland Security (DHS) on Sunday announced it has been directed by President Biden to take the lead in resettling refugees who have been evacuated out of Afghanistan to escape the Taliban.DH...
Read more

Afghanistan: The Sandhurst sisterhood trying to save Afghans

Desperate Afghans have been messaging British veterans they used to work with asking for help.
Read more

Consumers will drive the next wave of payments tech

How and why consumers are going to drive the next wave of payments tech.
Read more

The U.K. reported the most new coronavirus infections since the end of February, fueling rising concern that the resurgent pandemic could delay plans to ease restrictions.
Read more

Democrats claim to care about truth — until it’s...

Democrats can't claim to be for truth only when they're calling out Trump’s lies. Not admitting error amid new evidence debases the truth they claim to revere.
Read more

Valve has always been a supporter of Linux gaming, but the Steam Deck could really kick things into gear.
Read more

The health authority says it expects payments to reach £3.4m after a culture of bullying was exposed.
Read more

Afghanistan: Person on no-fly list flown to UK during...

However they are not deemed a person of interest to security agencies or police after an investigation.
Read more

Apparently even Samsung doesn’t know if the Galaxy S21...

Apparently, Samsung has said that it's canceled the rumored October Galaxy S21 FE launch, and is reviewing the phone.
Read more

"That was back before we knew how bad Google really was," says Internet Accountability Project leader Mike Davis, who pitched his PR services to lawyers for the Silicon Valley search titan in 2019.
Read more

The Taliban is advancing towards Afghanistan’s capital, Kabul, as foreign forces prepare to fully withdraw from the country. Thousands of people are being displaced and many more are fearful about what lies ahead. Reporting the news in the country can result …
Read more