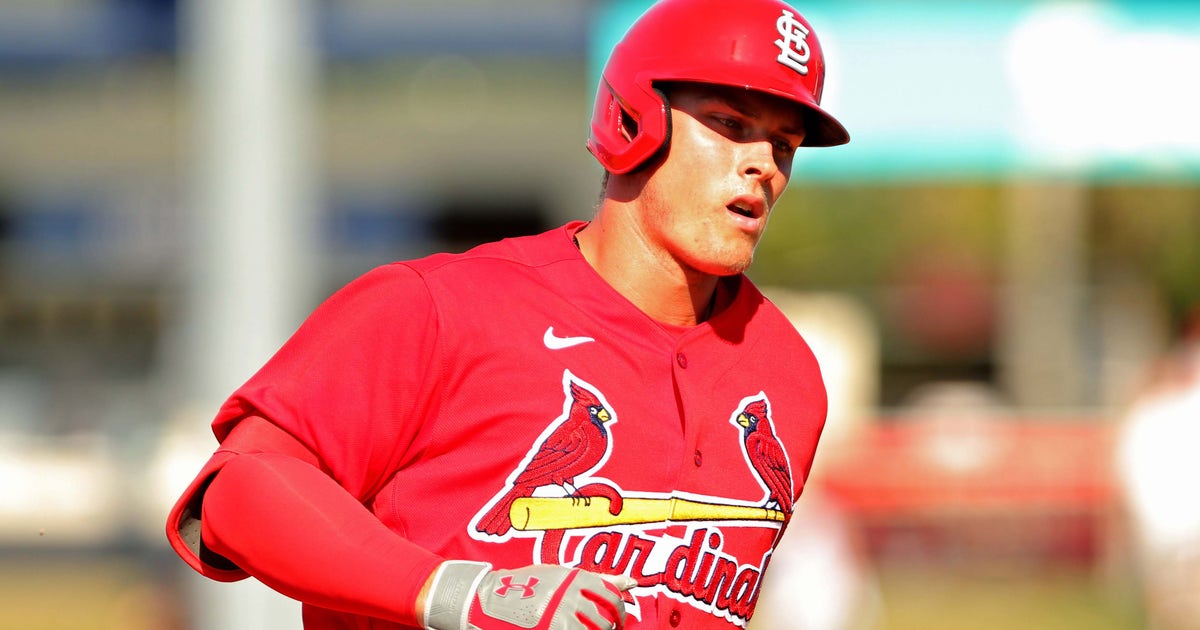 With the 7-5 victory at Roger Dean Stadium, the Cardinals notched their sixth win in the Grapefruit League.

In the first inning, Paul DeJong recorded his first big knock of the spring, slugging a two-run shot to give the Cardinals the early lead.

Daniel Ponce de Leon made his second start of the spring. The righty was effective against the majority of the lineup, but Adam Duvall gave Ponce de Leon fits during his five innings of work. Duvall slugged a solo homer in the second inning and followed up with a two-run triple in the third.

The Cardinals cut into the Marlins’ lead in the fourth as Austin Dean singled to score DeJong, making it a 4-3 game.

Tyler Webb and Genesis Cabrera combined for a pair of scoreless innings out of the bullpen, but Alex Reyes ran into trouble. Reyes allowed one run on a double and two walks before he was pulled after recording just two outs, both via strikeouts.

The Cardinals started an eighth-inning rally with a Tyler Heineman single and a pair of back-to-back walks. Jose Rondon then drew a walk to push a run across and make it a 5-4 ballgame. Then with the bases loaded, Nolan Gorman drove them all in with a double to right field.

With the tying run on first, Zack Thompson held the Marlins in check to close the ninth and give the Cardinals the 7-5 victory.

Up next, the Cardinals travel to Port St. Lucie to play the Mets at 12:10 pm on Friday afternoon. Why Scotland should be excited about the T20 World Cup

What you need to know about the Paris climate...

President Trump is expected to withdraw from the Paris Agreement. Here's what that could mean for future efforts to combat climate change.
Read more

Major open source vendor has expressed its displeasure by voting with its wallet.
Read more

The head of Tunisia's biggest party, the moderate Islamist Ennahda, on Saturday postponed a meeting of its highest council after senior members called for his resignation over his handling of the political crisis, party sources said.
Read more

Federal health officials and medical experts are expected to recommend that most Americans who are eligible for Covid-19 vaccines should get a booster shot eight months after their second dose to help inoculate them against the disease, according to two sourc…
Read more

Preview followed by live coverage of Monday's European Championship game between North Macedonia and the Netherlands in Amsterdam.
Read more

Kenyan policeman wakes up from coma to find he...

Neither his family nor the police force could locate Reuben Kimutai Lel, who was actually in hospital.
Read more

Frantisek "Frankie" Morris, 18, was last seen near the Vaynol Arms, Pentir, Gwynedd, on 2 May.
Read more

‘Multiple victims’ in shooting at FedEx facility in Indianapolis:...

Several people were shot at a FedEx facility in Indianapolis Thursday night, the Indianapolis Metropolitan Police Department said, according to reports.
Read more

China Tells Companies to Follow the ‘Rule of Law’

Job vacancies have risen by 35% compared to pre-pandemic levels because of a shortage of skilled workers.
Read more

‘Tot Mom’ Casey Anthony is back in the news after a bar altercation reportedly led to her getting a drink thrown on her. Anthony didn't hesitate to involve police in the matter.
Read more

Lee Cowan reviews some of the stories making news this weekend, including a devastating 7.2-mag earthquake in Haiti.
Read more

Is the Razer Project Hazel Chroma facemask coming too...

Razer has given us more details about the Project Hazel facemask at E3 2021 - but is its Q4 release date too late to be relevant?
Read more

President Biden’s decision to pull all U.S. troops out of Afghanistan by September would be a historic achievement closing a 20-year chapter of U.S. history that saw more than 2,300 troops killed and cost upward of $1 trillion.But big questions...
Read more

Malaysia made use of its emergency powers on Thursday, bypassing parliament to impose new laws on fake news two years after the act was scrapped by the previous government.
Read more

Apple event live stream: how to watch the iPhone...

Singers welcome G7 leaders to Cornwall with shanties by...

Strolling down the Prince of Wales pier in Falmouth in southwest England, local sea shanty group Bryher's Boys belt out a rendition of the traditional Cornish song "Lamorna" to the delight of onlookers.
Read more

Redcar rescue: Man in his 80s rescued after falling...

The RNLI says a team found the man clinging to a mooring chain after hearing "a weak cry for help".
Read more

A majority of the members in the state Assembly now support an end to Cuomo’s tenure.
Read more

Jeremiah Johnson, an Evangelical Christian who predicted that former President Trump would win reelection in 2020 is ending his ministry.Johnson said that he did not take the decision lightly, wr...
Read more

Cantlay starts with lead and keeps his distance at...

Patrick Cantlay met his goal in the first round of the Tour Championship on Thursday, and it had nothing to do with the score on his card or the size of his lead.
Read more

Joe Biden to Americans in Afghanistan: ‘We will get...

Mr Biden has come under intense criticism amid the chaotic withdrawal of US troops from Afghanistan.
Read more

Rates of Covid-19 hospitalizations for children and adults under...

The pace of Covid-19 hospitalizations is surging across the US, with the rates for children and adults under 50 hitting their highest levels yet, according to data from the US Centers for Disease Control and Prevention.
Read more

American officials have a new draft peace deal, but Afghans worry it could make the violence worse.
Read more

Supporters say pesticides damage the environment, but farmers warn they could lose their livelihoods.
Read more

The long-awaited opt-out laws will go ahead after talks between Paul Givan and Robin Swann.
Read more

Amazon.com Inc. has secured rockets from United Launch Alliance as part of the company’s effort to launch 3,236 satellites and provide low-cost broadband internet access to remote parts of the world.The Atlas V rockets will be used for nine launches, the comp…
Read more

Walmart on Friday announced that fully vaccinated employees and customers no longer have to wear masks, following CDC guidance change on the issue.
Read more

PM ‘needs to be honest’ about vaccine passports

Would you let a robot lawyer defend you?

Why artificial intelligence is increasingly being used by the legal profession.
Read more

BeenVerified enables you to search for someone using a wide range of data points, but the quality of the results is inconsistent at best.
Read more

"It's better than your best friend," Robbie Stouffer reportedly said. "I can't really really explain the security and the feeling that someone's there."
Read more

Colin Powell, the first Black US secretary of state whose leadership in several Republican administrations helped shape American foreign policy in the last years of the 20th century and the early years of the 21st, has died from complications from Covid-19, h…
Read more

Bombardier Inc. is selling its stake in Alstom SA in a deal that would generate proceeds of more than $630 million at current market prices.
Read more

Rebound therapy: The zero-gravity exercise that gets children screaming...

Trampolines can be fun, but for those with physical and learning difficulties they can also offer a gravity-free way to exercise.
Read more

Google Chrome 89 should be a huge RAM saver,...

Google has gone into detail on the performance upgrades delivered with Chrome 89.
Read more

NASA on Monday announced that its space helicopter Ingenuity had made history by becoming "the first craft to achieve controlled, powered flight on a planet beyond Earth.""Perseverance got us to ...
Read more

Supporters call Laurel Hubbard's selection to the Olympic Games a breakthrough for the transgender community. Others say it's unfair for an athlete who used to compete with men to participate in women's sports. Imtiaz Tyab has the story.
Read more

The Springer Spaniel was winched to safety after landing on a small ledge at the Grey Mares Tail near Moffat.
Read more

Plaid and Lib Dems have raised concerns, but Labour said "prizes could be won" by their introduction.
Read more

Finance Minister Olaf Scholz, the frontrunner in Germany’s upcoming election, faces questions from lawmakers over an investigation of a unit of the country’s customs service that resulted in a recent police search at his ministry
Read more

Sydney Lockdown Extended by One Week as Delta Outbreak...

A two-week lockdown of Sydney will be extended for at least another seven days as authorities race to stamp out an outbreak of the delta variant that’s grown to more than 350 cases since mid-June and has spread to an aged-care facility.
Read more

Europe’s energy-intensive industries at the core of the continent’s manufacturing prowess are feeling the squeeze from higher gas prices.
Read more

A jury in Virginia has awarded half a million dollars to a patient who secretly recorded his doctor insulting him during a colonoscopy. CBSN's Jeff Glor has details.
Read more

Google Pixel 6 with 5 years of support is...

Android phone makers have for years got away with barely supporting their devices, and that needs to change.
Read more

The Biden administration is planning to speed up deportations for some migrant families who cross the US-Mexico border, the Department of Homeland Security said Monday.
Read more

Many of today’s protesters lack the earlier generations’ loyalty to the revolutionary project — and increasingly have no one but the government to blame for their woes.
Read more

Colonial Pipeline CEO to testify before Congress next month

Here are the major retailers that have updated their...

In response to the Centers for Disease Control and Prevention (CDC) updating its guidance to say vaccinated individuals can go indoors without masks, major retailers across the country are deliberating their mask policy.There are some major...
Read more

Ontario to limit outdoor gatherings amid wave of infections

Democratic U.S. congressional members sent a letter on Wednesday to the Environmental Protection Agency, urging the administration to reject any action that would exempt oil refiners from mandates to blend biofuels into the nation's fuel mix.
Read more

As strikes continue in Israel and Gaza, Sunday was...

Rundown rural hospitals are struggling to cope with a Covid crisis they were never equipped for.
Read more

Andrew Freris on the Markets (Radio)