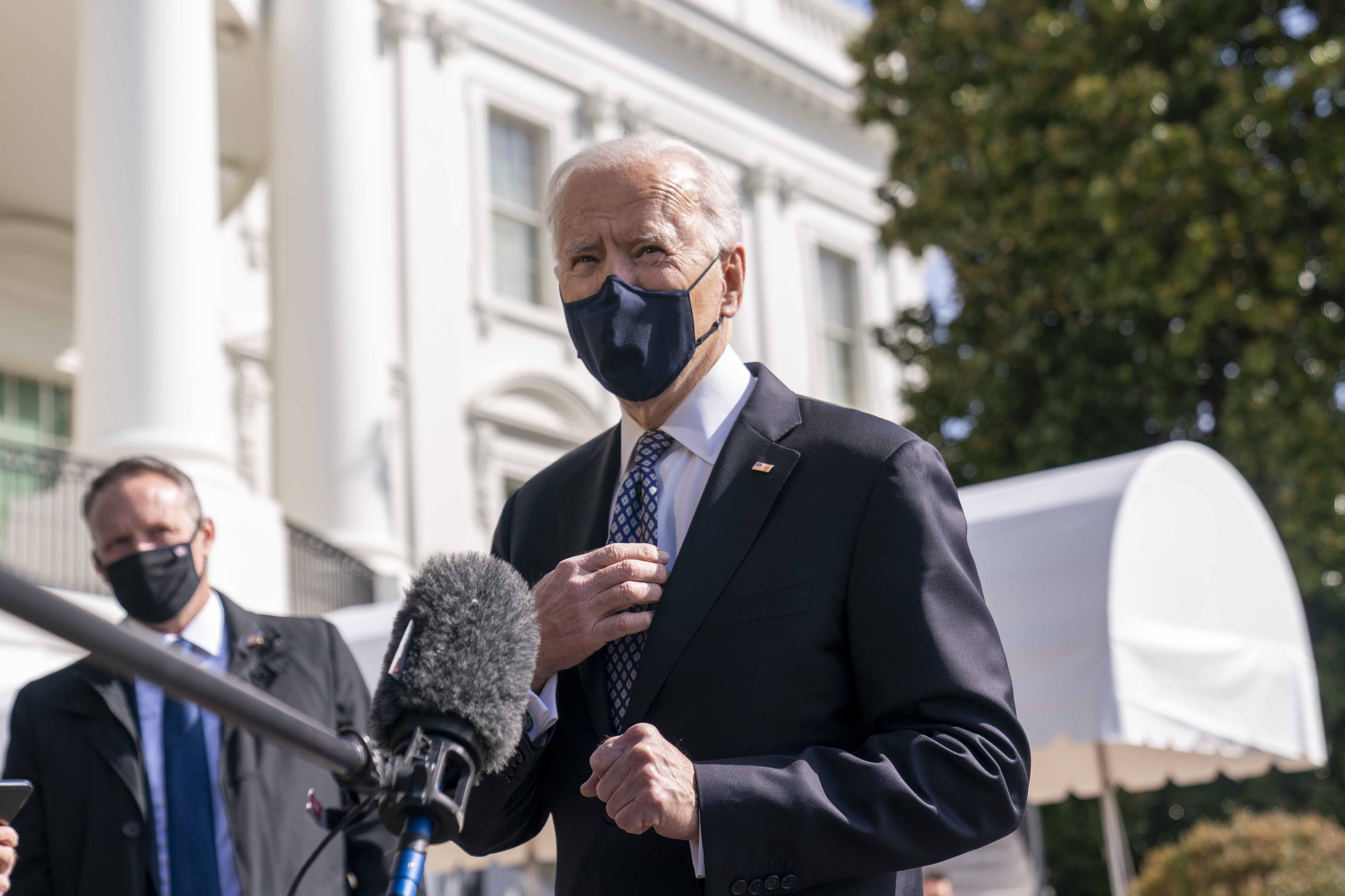 On Thursday Biden touted the mass vaccination campaigns progress and promised to unveil a new goal sometime next week.

“These milestones are significant accomplishments, but we have much more to do, he said in an address from the White House. This is a time for optimism, but its not a time for relaxation.

At the onset of his tenure, Biden frequently defended the ambitiousness of the 100-million-dose milestone and criticized the media for trying to have it both ways after his goal was met by skepticism in some corners when it was first announced.

Including shots administered during the tail end of former President Donald Trumps tenure, roughly 116 million doses have gone out to people across the country, according to data from the Centers for Disease Control and Prevention. Nearly 30 percent of all adults have received at least one dose.

The country is now administering nearly 2.5 million doses per day, according to recent federal data. That figure is expected to continue to increase as a third vaccine, a one-dose version manufactured by Johnson & Johnson, becomes more widely available.

The federal government has placed orders for roughly 800 million doses, split between Pfizer, Moderna and Johnson & Johnson. Enough doses to inoculate every American adult are expected to arrive by the end of May, though it will take additional time to get those shots into peoples arms.

Biden on Thursday said theyre looking to July 4 as a date when a sense of normalcy could arrive if vaccinations continue apace and Americans continue to practice social distancing and mask wearing.

Critical indicators, including the rate of new cases, hospitalizations and deaths, have dropped after a surge earlier this winter. However, health officials remain concerned about new outbreaks in a number of states that have begun lifting restrictions put in place to combat the virus spread.

Fourteen more victims were found in the rubble from the Surfside, Florida building collapse, bringing the death toll to 78 people with another 62 still missing. CBSN's Tanya Rivero spoke with Bill Sklar, the chair of a new task force that will review and make…
Read more

The International Monetary Fund began a virtual mission to Ukraine as the government seeks to resume a $5 billion loan that’s been frozen for months because its terms weren’t met.
Read more

Samsung Galaxy A82 leaked images make it look like...

Purported images of the Samsung Galaxy A82 reveal a phone with a conventional rear camera suite, making it look like it could be a Samsung Galaxy S21 FE.
Read more

Thousands of young Tunisians have been demanding change as they strive to live in and shape the post-revolution dream.
Read more

BP Plc abandoned three oil projects in Kazakhstan after it changed strategy to concentrate on renewable energy and its existing ventures.
Read more

Los Angeles Angels star Shohei Ohtani was hit by a pitch as he batted during a game Thursday night. Now two members of the Chicago White Sox are paying the price.
Read more

Vigil held for slain US Marine in her home...

A U.S. Marine who was among 13 killed in a suicide bombing in Afghanistan was honored Tuesday evening in her hometown
Read more

25 years after the release of the first Resident Evil game, the survival horror franchise only continues to grow stronger.
Read more

Bring the Afghans to America

President Biden should use his immigration powers to parole for Afghans who want to flee from the Taliban's rule and help them evacuate while the government is still operating flights out of Kabul.
Read more

'Humble' Gareth Southgate is well-loved by people who live and work near his North Yorkshire home.
Read more

More than half of voters in a new poll support Congress's bipartisan infrastructure bill as Democrats scrounge for the votes needed for the legislation to pass the House.In a new ...
Read more

Breivik survivors keep fighting for their vision of Norway

On the 10th anniversary of Norway’s worst peacetime slaughter, survivors of Anders Behring Breivik’s assault worry that the racism which nurtured the anti-Islamic mass murderer is re-emerging
Read more

Manchester International Festival to go ahead with Covid looming...

The Manchester International Festival will go ahead with events in streets and shopping centres.
Read more

Biden and Harris to go on the road to...

It's a different approach than what former President Obama took in 2009.
Read more

The end of Texas’s mask mandate and business-capacity restrictions in March had no impact on economic activity or coronavirus case counts, according to a new study.
Read more

Manchin won’t commit to voting for an infrastructure bill...

Sen. Joe Manchin, a key Democratic swing vote, would not commit on Wednesday to backing an infrastructure package along straight party lines, rebuffing a demand made by liberals who want to ensure he will be on board with a broader bill passed without Republi…
Read more

Former British Cycling and Team Sky chief doctor Richard Freeman is found guilty of ordering banned testosterone in 2011 "knowing or believing" it was to help dope a rider.
Read more

Rash of mass shootings stirs US fears heading into...

Watchdog: Penalties meatpackers paid for price-fixing to blame for...

The left-leaning watchdog group Accountable.US released a report this month blaming the multimillion-dollar fines that the meat processing has paid for the rising cost of meat.According to a review conducted by Accountable.US, the largest meat...
Read more

A Colorado woman who was reported missing by her family earlier this month was found dead last weekend in a hidden grave in a remote area of the state, according to authorities.
Read more

Watch all the 2020 Olympics action you can handle...

Colonial Pipeline Co. paid nearly $5 million to Eastern European hackers on Friday, contradicting reports earlier this week that the company had no intention of paying an extortion fee to help restore the country’s largest fuel pipeline, according to two peop…
Read more

It’s the clearest sign of how he wants to establish himself as one of the most consequential presidents ever.
Read more

Will critical race theory be the new debate issue...

Anti-Olympic petition attracts tens of thousands of signatures in...

The Water Cube—the aquatics center for the 2008 Beijing Summer Olympics—is now the “Ice Cube,” ready to host curling in the 2022 Winter Olympics next February.
Read more

Michael Nader dead: Dynasty and All My Children actor...

His other credits included All My Children and As the World Turns.
Read more

Way back in January, Samsung launched the Galaxy S21 with a host of pre-order features, the iPhone 13 is offering a lot less.
Read more

Singapore to Donate Vaccines Via Covax, Urges Others to...

England vs Canada live stream: how to watch rugby...

Cannucks face off against England at Twickenham - here's how to get an England vs Canada live stream to watch the rugby international online wherever you are - and for free!
Read more

Clarence Williams III, who played the cool undercover cop Linc Hayes on the counterculture series "The Mod Squad" and Prince's father in "Purple Rain," has died at age 81. Williams died Friday at his home in Los Angeles after a battle with colon cancer. CBSN'…
Read more

A container ship crashed into a crane at a port in Taiwan on Thursday, damaging a second crane, sending heavy cargo containers tumbling onto a dock and prompting workers to run for safety, a video shows.
Read more

Delia Fiallo, a native of Cuba who was considered the mother of Latin America’s telenovelas and wrote dozens of the popular television soap operas, has died at her home in Coral Gables, Florida
Read more

Biden to keep Trump-era land mine policy in place...

The Pentagon said it will keep in place a Trump-era policy allowing the use of certain antipersonnel land mines that were restricted under former President Obama while it conducts a review.The announcement comes as...
Read more

Palestinian officials say soldiers shot the 12-year-old as he travelled in a car in the West Bank.
Read more

A Surge in Ethical Finance Is Making ESG a...

Banks are on a hiring spree to compete for market share in sustainable debt, one of the fastest-growing parts of finance.
Read more

With the group stages getting under way this week, BBC Sport sets the scene for this season's intriguing Champions League.
Read more

President Biden will tour wildfire damage in Idaho and Northern California and then campaign for Governor Gavin Newsom in Southern California.
Read more

New York Governor Andrew Cuomo said concert venues and baseball games will resume this spring, ushering in what he called a rebirth of the state as Covid-19 rates drop and vaccinations increase across the state.
Read more

Liz Chicaje, who fought for the creation of Yaguas National Park, has been awarded the Goldman prize.
Read more

Dan Bongino rips liberals and media over support for...

Fox News host and former NYPD officer Dan Bongino ripped into the media and liberals on Monday for supporting the defund the police movement amidst rising crime in major U.S. cities.
Read more

A flood emergency order is in effect in Houston, as the city is expected to receive a year's worth of rain from Harvey, now downgraded to a tropical storm but bringing torrential rain for the next few days. Mark Strassmann reports.
Read more

DOJ to investigate threats against teachers, school board members...

Taiwan has submitted an application to join a Pacific trade deal, just days after China sent its own request to become a member of the agreement which was once pushed by the U.S. as a way to isolate Beijing and solidify American dominance in the region.
Read more

Many pro-Trump Republicans have expressed reluctance to take up the offer of a Covid-19 jab.
Read more

These true wireless earbuds bring you a 'whisper mode' for call privacy and a Plug & Wireless feature to pair up with any device.
Read more

PROGRAMMING NOTE: Massachusetts Playbook is taking a previously scheduled end-of-summer hiatus next week. Ill be back in your inboxes on Tuesday, Sept. 7....
Read more

NFL to investigate claim Chung told he was ‘not...

The NFL will launch an investigation after assistant coach Eugene Chung said he was told he was "not the right minority" during a job interview with a team.
Read more

Statehood for D.C.: Washingtonians’ cry for freedom to vote

For the colonists who declared independence 245 years ago, "No taxation without representation" was a rallying cry. For residents of our nation's capital, it still is. Correspondent Mo Rocca looks at the issue of statehood for Washington, D.C., and of the pol…
Read more

Venezuela says IMF has not delivered COVID-19 funds amid...

Venezuelan Vice President Delcy Rodriguez said on Wednesday that the International Monetary Fund (IMF) has not yet delivered funds under a program to help countries battle the COVID-19 pandemic, amid a dispute over the government's legitimacy.
Read more

A 22-year-old British man was arrested Wednesday in Spain on charges related to last year’s hack of Twitter that led to the brief takeover of more than 130 accounts, including those belonging to Joe Biden, Bill Gates and Kim Kardashian, the Wall Street Journa…
Read more

Biden’s team tightens grip on state use of Covid...

Latitude Festival in Suffolk will run at 'full capacity'