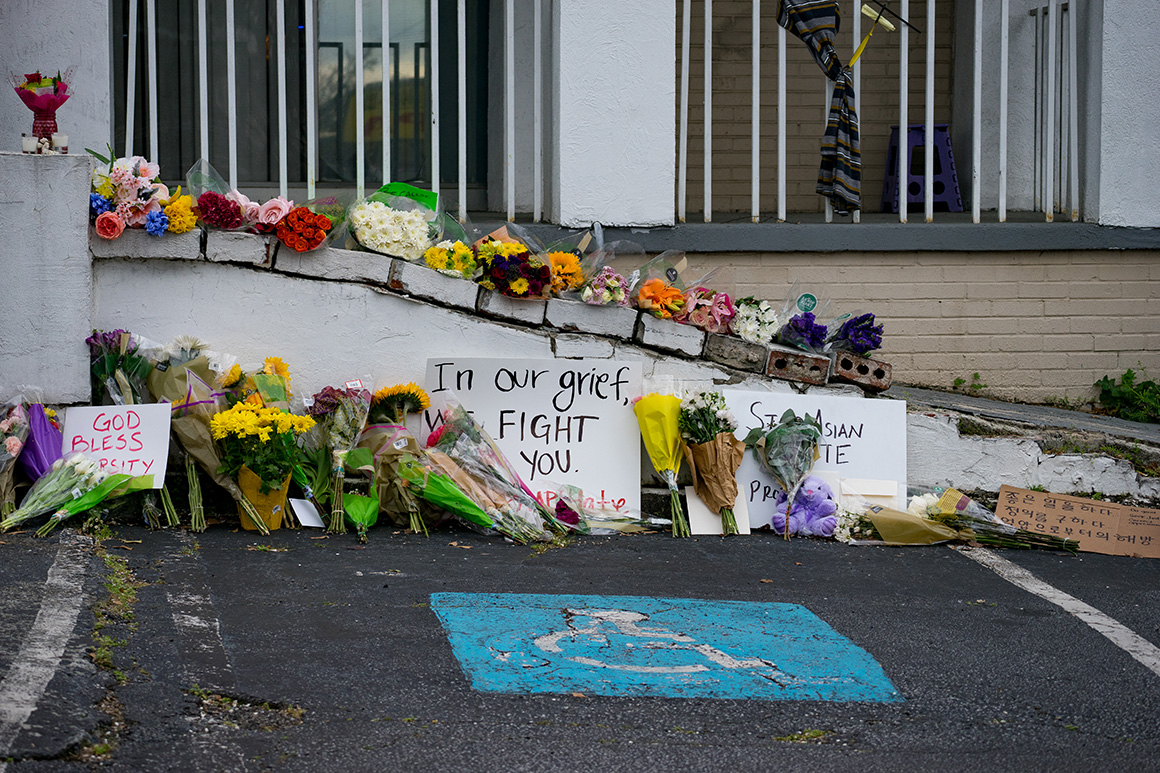 The attacks Tuesday on Youngs Asian Massage Parlor, Aromatherapy Spa and Gold Spa represented the most violent episode of a year marked by anti-Asian discrimination and attacks.

The string of shootings launched a contentious national debate over what drove the suspects motivation. Nguyen, however, was unequivocal in describing the spate of shootings as the result of racial and gender animus, citing the text of Georgias hate crime law passed last summer after Ahmaud Arbery, a Black man who was jogging in Brunswick, Ga., was shot and killed by a white man who pursued him.

We have the facts. We know that he targeted three Asian-owned businesses, Nguyen told CNN of the suspect, a 21-year-old white man. He drove 40 minutes between those businesses, and along the way and we know this area well there are other adult entertainment businesses that are Black and white.

But the suspect chose not to go to any of them, Nguyen said. He specifically chose these… businesses. And, as a result, six Asian women are dead. Under the hate crimes law, both from a racial and a gender perspective, I believe it is a hate crime.

Asked whether the White House should refer to the shootings as such, Nguyen said: I believe they ought to investigate it as a hate crime. And they ought to listen to the Asian people living in Georgia and to the community as a whole, because we are the ones asking this to be considered a hate crime and to be investigated as one. Why Scotland should be excited about the T20 World Cup

White House officials on Friday held a virtual listening session with a group criminal justice advocates who were previously incarcerated to receive input on how to advance prison reform through policy.
Read more

An attorney for Dr. Kornfeld, a nationally recognized addiction treatment specialist, says his client received a call from a member of Prince's inner circle the day before he died. The person described Prince as suffering from a grave medical condition. Jamie…
Read more

Nvidia RTX 3080 Ti Founders Edition will be identical to the RTX 3080 card, at least if this leak is correct.
Read more

On Monday, Kristine Levine, from Bristol, Connecticut caught the black bear taking the package off her porch and leaving her driveway via surveillance video.
Read more

ACLU calls on DOJ to enact permanent protections for...

The American Civil Liberties Union (ACLU) is calling on the Justice Department (DOJ) to enact permanent protections for journalists and legal observers at protests, including preventing federal agents from arresting or using physical force against these indiv…
Read more

The Fuchsia OS has been built from scratch and supports a wide range of products including laptops, phones and smart home devices.
Read more

India has recorded another 368,147 infections and 3,400 deaths as a catastrophic surge ripples through the country
Read more

Rep. Jason Crow (D-Colo.) on Sunday said Republicans' fear of former President Donald Trump, and their desire for power, is "overriding" their patriotism "to do what's necessary for the good of the country."When as...
Read more

Nicholas Wade on The Coronavirus Escaping From A Lab...

Nicholas Wade, journalist and author, spoke to Brian Kilmeade about the two origin scenarios for the coronavirus, naturally emerging or escaping from a lab in Wuhan. Wade says based on the emerging facts, the lab escape looks like the more plausible scenario.…
Read more

‘Jury Still Out’ on Impact of Stimulus, Snap-on CEO...

Officials with the Department of Housing and Urban Development's (HUD) Office of the Inspector General are blaming the Office of Management and Budget (OMB) under former President Trump for delays that held up desperately...
Read more

Here’s what Biden can do on his own about...

President Joe Biden on Tuesday laid out his most comprehensive plan yet for shrinking the nation's longstanding racial wealth gap, the latest step in his promise to infuse more equity in government policies and in the rebuilding of the economy after the coron…
Read more

Confusion and controversy surround the CDC's updated guidelines that allow people fully vaccinated against COVID-19 to shed masks in most indoor settings. Also, the crisis in the Middle East continues to escalate. All that and all that matters in today's Eye …
Read more

Florida has more new Covid cases than ever before

Florida reported nearly 21,700 new Covid cases, which is its highest one-day total since the start of the pandemic, according to federal health data released Saturday.
Read more

Former officer Derek Chauvin to be sentenced for murder...

Former Minneapolis police officer Derek Chauvin will be sentenced Friday for the murder of George Floyd. The prosecution is asking for 30 years, while Chauvin's defense is asking for probation with time served. Some members of the community are looking for th…
Read more

Newly-elected MSPs to be sworn in at Holyrood

News anchor Nancy Grace will host a weekly program on the Fox Nation streaming service that is tied to the return of “America’s Most Wanted.”
Read more

With just three weeks to go, Governor Phil Murphy and challenger Jack Ciattarelli took the stage for the final gubernatorial debate before the election. Brent Johnson, politics reporter for The Star-Ledger and NJ.com, joins "CBSN AM" to discuss the highlights.
Read more

Will Rogers threw for 408 yards and three touchdowns and Nathan Pickering sacked Zach Calzada in the end zone late for a safety in Mississippi State's 26-22 victory over No. 15 Texas A&M on Saturday night.
Read more

India reported 114,460 new coronavirus infections on Sunday, the lowest in two months, while the death toll increased by 2,677, as parts of the country prepared to ease movement restrictions.
Read more

Ford Motor Co. is boosting spending on electric vehicles by at least 36% to $30 billion over the next four years and said that by the end of the decade, four out of 10 models it sells will be battery-powered.
Read more

Plenty of companies are out have fun with their customers, so you may need to watch your back if you don't want to get pranked. CBSN's DeMarco Morgan has more on the best jokes and biggest flops this April Fools' Day.
Read more

Her vow to keep wearing this wedding dress sparked...

Samantha Mathew vowed to get as much wear as possible out of her wedding gown. So far, it has traveled to 13 countries and plays a big role in an anniversary tradition she and her husband share.
Read more

Air India said the scrapped, deregistered plane had been sold off.
Read more

Here, we run down how to get F1 TV on Roku so you can catch all the thrills and spills form the comfort of your sofa.
Read more

Why 26 Korean words have been added to Oxford...

The new additions include references to food, fashion and entertainment.
Read more

A U.S. Navy nuclear engineer with access to military secrets has been charged with trying to pass information to someone he thought worked for a foreign government, but who turned out to be an FBI agent. Senior investigative correspondent Catherine Herridge r…
Read more

Alicia and Herman Lopez remember how much their son Hunter loved all things Star Wars, even telling his parents before he deployed that he wanted to be buried with the lightsaber he built at Disneyland park in November 2019. Less than two years later, 22-year…
Read more

Opposition politicians want a rethink on the planned closure of the vaccination hub at the Hydro in Glasgow.
Read more

One of Europe’s busiest airports is hitting the bond market on Monday to shore up its finances in the face of a second tourist season lost to the coronavirus pandemic.
Read more

British and Irish Lions: Pick your Lions XV for...

Stick or twist? What changes, if any, should Lions coach Warren Gatland make as he attempts to close out a series victory over South Africa?
Read more

Leeds and Reading Festival boss Melvin Benn says he is confident both will go ahead this summer.
Read more

A top White House economic adviser on Friday disputed the suggestion that President Biden's declaration of a deal on infrastructure alongside a bipartisan group of senators was merely a photo opportunity, after the deal r...
Read more

Tour de France fans under scrutiny after one spectator...

Tour de France spectators came under scrutiny over the weekend after a woman holding up a cardboard sign started a massive chain-reaction crash that caused some injuries to the competitors.
Read more

Florida deputy gets 8-hour suspension after video of Black...

A Florida teenager said he is outraged by the "slap on the wrist" sentence a deputy received for throwing the handcuffed teen against a wall and claiming he had no First Amendment right.Palm B...
Read more

What's the best goal ever scored at a European Championship? The Match of the Day: Top 10 podcast team - Gary Lineker, Alan Shearer and Micah Richards - rank their favourites.
Read more

Xiaomi Mi 11 Ultra to have the largest camera...

The Xiaomi Mi 11 Ultra will be unveiled on March 29 with the Samsung ISOCELL GN2 image sensor which is 1/1.12-inches in size.
Read more

Marvel’s What If…? first reactions: here’s what the critics...

Marvel's What If...? on Disney Plus arrives on August 11 – and early reactions for the animated series are positive.
Read more

Officials: Many Haitian migrants are being released in U.S.

Many have been released with notices to appear at an immigration office within 60 days.
Read more

Dutch caretaker Prime Minister Mark Rutte’s conservative party has powered to a fourth consecutive election victory, in a vote held during a nationwide lockdown and dominated by the COVID-19 pandemic
Read more

Florida fugitive Brian Laundrie allegedly purchased a burner phone from an AT&T store in his hometown of North Port the day his parents claimed to have last seen him, according to a report.
Read more

"It's great we're getting so many tourists," said one business owner of an event that generates up to $800 million in sales.
Read more

Our Cypherix Secure IT review outlines the pros and cons of this file encryption program, explaining why it’s one of our top choices.
Read more

Protestors clash in LA over transgender woman disrobing in...

Tensions rose Saturday between protestors and counter-protestors in Los Angeles over a spa incident involving a transgender woman.Last week, a cisgender woman complained to staff at Wi Spa in Koreatown after a tran...
Read more

The contaminated spray was sold at about 55 Walmart stores.
Read more

A fuel crisis sparked by a shortage of lorry drivers continues to dominate the front pages in Scotland.
Read more

The Red Sox Are Making Lynchie Buy Some Tickets...

This leaked Snapdragon chipset could power the best Android...

The successor to the Snapdragon 888 has leaked, and it looks like it could be an even bigger upgrade than expected.
Read more

Shirley-Anne Somerville says she will not blame anyone else if the 2021 awards system is not successful.
Read more

The Texas Legislature on Sunday moved closer to approving a sweeping bill that curtails voting opportunities in the country's second most-populous state, as Republicans fast-tracked the measure before the legislative session closes.
Read more

Biden nominates ambassadors to Sweden, Belgium and the Dominican...

Students need only 3-feet of space in the classroom with masks, CDC...