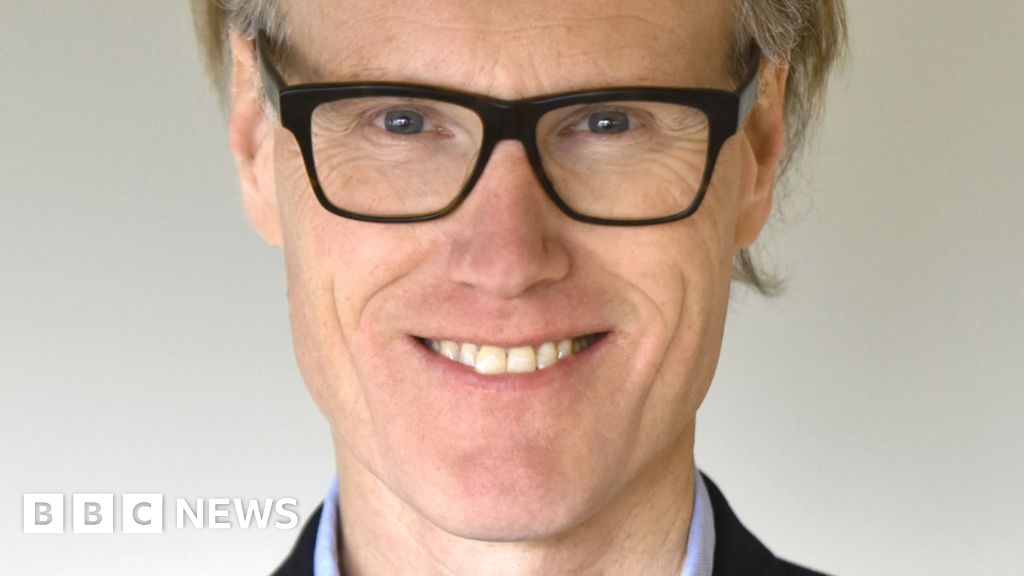 The BBC’s arts editor Will Gompertz is to leave the role after 11 years to join the Barbican Centre in London.

Gompertz said he was “delighted” to be taking up the venue’s new role of director of arts and learning.

“The arts in general, and the Barbican in particular, have a vital role in helping shape our future,” he said.

During his time at the BBC, he has interviewed figures ranging from Sir David Hockney and Sir Elton John to Spike Lee and Ai Weiwei.

He has also written a weekly review for the BBC News website since 2017.

The Barbican said he would “lead the creation and delivery of the next phase” of the artistic vision of the venue, which will mark its 40th anniversary and start a “major renewal” project next year.

Barbican managing director Nicholas Kenyon said Gompertz would “reinvent the Barbican’s commitment to ‘arts without boundaries’ in the radically changed environment after the pandemic”.

Gompertz said it was a “hugely significant time for both the institution and the broad audiences it serves”.

He said: “As we all adjust to the major cultural, ecological, scientific, technological and political changes that are defining the early decades of the 21st Century, the arts in general, and the Barbican in particular, have a vital role in helping shape our future, providing an inclusive platform for discovery and discussion, and a diverse environment for ideas and exchange.

“I am greatly looking forward to playing a part in the next chapter of the Barbican’s life as one of the world’s leading arts centres.”

The Barbican hosts dance, film, music, theatre and visual arts, and will remain home to the London Symphony Orchestra following the recent decision not to build a new concert hall in the capital.

BBC director of news Fran Unsworth said Gompertz would “be greatly missed” and had “brought character, flair and a great depth of knowledge to his role at the BBC”.

Recent reviews by Will Gompertz: Donte DiVincenzo’s season is over, after tests showed Friday that the Milwaukee guard tore a ligament in his left ankle during Game 3 of the Bucks’ playoff series against the Miami Heat.
Read more

Pandemic spurs boom in virtual offerings for US schools

School systems across the U.S. are setting up their own virtual academies in growing numbers to accommodate families who feel remote instruction works best for their children, regardless of the rise or fall of COVID-19 infection rates
Read more

Taliban says they are committed to Afghanistan peace talks

The Taliban on Sunday said they are committed to peace talks, and want a "genuine Islamic system" in Afghanistan."We understand that the world and Afghans have queries and questions about the form of the system to...
Read more

On The Money: Democrats closing in on massive infrastructure...

Happy Monday and welcome back to On The Money, where we're wondering what a financial version of a home run derby would be. I'm Sylvan Lane, and here's your nightly guide to everything affecting you...
Read more

For some Native Hawaiians, surfing’s Olympic debut is both a celebration of a cultural touchstone invented by their ancestors, and an extension of the racial indignities seared into the history of the game and their homeland
Read more

Despite their fiery rhetoric, Republicans continue to default to the D.C. consensus on international affairs. The post The GOP is Enabling Biden’s Worst Foreign Policy Impulses appeared first on The American Conservative.
Read more

As China Evergrande Group tries to quell concerns about its financial health, the property giant has gone to great lengths to publicize its shrinking debt load.
Read more

DNC tops RNC as both see record May fundraising

A Los Angeles County judge on Friday authorized the City of Burbank to cut off electricity to a restaurant that has stayed open in defiance of a court order.
Read more

Florida Man Told to Abandon His Shoes After Dozens...

Bug enthusiasts identified the creatures as scarlet and bumblebee millipedes, which have exoskeletons.
Read more

Antoine Griezmann rescues a point for France and denies Hungary one of the big Euros shocks in front of a raucous 60,000 crowd in Budapest.
Read more

"What hypocrisy," tweeted the progressive independent senator from Vermont on Sunday.
Read more

A TikTok user flips through the pages of a retro catalog to show ""what Sears sold to women in 1905."
Read more

PS5 deals are discounting big releases in this weekend’s...

Here are nine questions Biden may face at his...

President Biden will hold his first formal press conference on Thursday, more than 60 days after taking office.The presser comes as Biden faces a burgeoning crisis at the southern border, mass shootings that have r...
Read more

About 1,000 Californians were peacefully celebrating Juneteenth in the area, when gunfire broke out.
Read more

“We’re not going to let a few people stop it from happening,” AFL-CIO President Richard Trumka said. “Its time has come. Its time is long past due to be enacted. And we’ll do it."
Read more

Philippines President Rodrigo Duterte said on Saturday that he would be retiring from politics after his current term and signaled that his daughter would run for president in 2022.ABS-CBN News ...
Read more

Paul Van Doren, who co-founded Vans shoes in 1966, has died at age 90. He took control of the company in the '80s and helped it become a California icon.
Read more

"We've done a wonderful job of telling people what we don't like and we actually have quite a few good ideas, and we want a seat at the table," Curtis says.
Read more

A federal judge is set to hear arguments on whether Virginia prosecutors can bring manslaughter charges against two U.S. Park Police officers accused of fatally shooting an unarmed motorist in 2017
Read more

Covid: Return to normality won’t be a light switch...

Dr Anthony Fauci, the top Covid adviser in the US, says a return to normality will be gradual.
Read more

“American Idol” crowned its Season 19 winner on Sunday, bringing an end to a year of impressive talent, behind-the-scenes shakeups and conditions marred by the coronavirus.
Read more

Roidmi S1E – should I buy one&quest;

Is the Roidmi S1E vacuum any good? Here we find out
Read more

Apex Legends and Titanfall developer is working on a...

How Long Will The U.K. Fuel Crisis Last? Here...

U.K. drivers are queuing for fuel in scenes that are reminiscent of the 1970s, creating a national crisis out of something that what was initially a relatively minor logistics problem.
Read more

The Texas state Senate has passed legislation that would repeal requirements to teach the history of white supremacy and the ways "in which it is morally wrong," among other lessons pertaining to prominent people of color...
Read more

Florida's Department of Economic Opportunity has announced that they plan to end weekly pandemic unemployment benefits on June 26.The DEO ...
Read more

Biden administration shifts to new priorities after success on...

With the bipartisan infrastructure deal nearly finalized, the Biden administration is shifting its focus to other items on the president's agenda. This includes passing new legislation to protect voting rights and possibly extending pandemic safety nets such …
Read more

School districts across the country have an important decision to make before fall classes begin: Will students be required to wear masks
Read more

Harris to address migration as she meets Guatemalan leader

3 Key Things In The Markets

Redfield tells CNN he believes origin of the coronavirus...

Former Centers for Disease Control and Prevention Director Robert Redfield told CNN in an interview that aired Friday he thinks coronavirus originated from a lab in China."It's not unusual for respiratory pathogens...
Read more

Children under 12 could be able to receive the...

The COVID-19 vaccine could be approved for emergency use authorization for children under 12 years old as soon as early to midwinter, NBC News ...
Read more

Drought is the West’s ‘new normal’

The Western U.S. faces its driest era in 1,200 years. Will states like Arizona, Nevada, New Mexico and Utah adapt to the prolonged drought?
Read more

W.Va. Gov. frustrated over vaccination rate: ‘We just are...

West Virginia Gov. Jim Justice (R) expressed frustration with his state's vaccination rate, warning constituents that people are either going to get inoculated against COVID-19, or "we're going...
Read more

President Joe Biden formally kicked off a victory tour to celebrate his $1.9 trillion stimulus, stamping his mark on a law he says will help deliver Americans relief from the pandemic and its economic devastation.
Read more

The meeting comes after White House officials met with a bipartisan group of senators on Tuesday.
Read more

The Complex Truth About ‘Junk DNA’

Genomes hold immense quantities of noncoding DNA. Some of it is essential for life, some seems useless, and some has its own agenda.
Read more

Android app devs will now be required to verify...

Monogamy and domesticity aren't for everyone. Jut ask these couples.
Read more

Around 200 indigenous Peruvians have taken over the facilities of a pipeline station of Petroperu, the state-owned company said on Tuesday, as part of a protest by Amazon native groups demanding better economic and social support in the area.
Read more

BTS Thanks The ‘Best People In The World,’ Their...

Mexico and Brazil do not plan on limiting access to AstraZeneca's COVID-19 vaccine after the United Kingdom's drug regulator recommended doing so amid a potential risk of blood clots. ...
Read more

Walmart blows past expectations for the first quarter

Walmart blew past Wall Street projections in the first quarter with U.S. stimulus payments to Americans helping to boost sales and the company raised its expectations for the year
Read more

Data is as valuable as currency today, and every business needs to protect it.
Read more

Ten Iranian nationals were charged in the U.S. with using shell companies to disguise transactions, including the purchase of two $25 million oil tankers, in an effort to dodge American sanctions on the mideast nation.The charges, originally filed in October,…
Read more

A watchdog says they broke House of Lords rules by not taking the mandatory training by 1 April.
Read more

A consumer advocacy group is suing Smithfield Foods Inc. for allegedly fueling fears of a meat shortage during the pandemic to boost demand and prices for its products.
Read more

It’s a strange time for the relationship between Republicans and big business.Important figures in a party that usually toes the pro-business line are instead throwing jabs at the corporate world. The critics include several potential 2024...
Read more

Wraith: The Oblivion – Afterlife puts you into a...

Wraith: The Oblivion - Afterlife is VR game that knows how to deliver a delightfully frightening horror experience.
Read more

"When I read this, it didn't seem like their usual script, which is typically of poor academic quality," the school staff member who uncovered the deception wrote in an email to the superintendent.
Read more