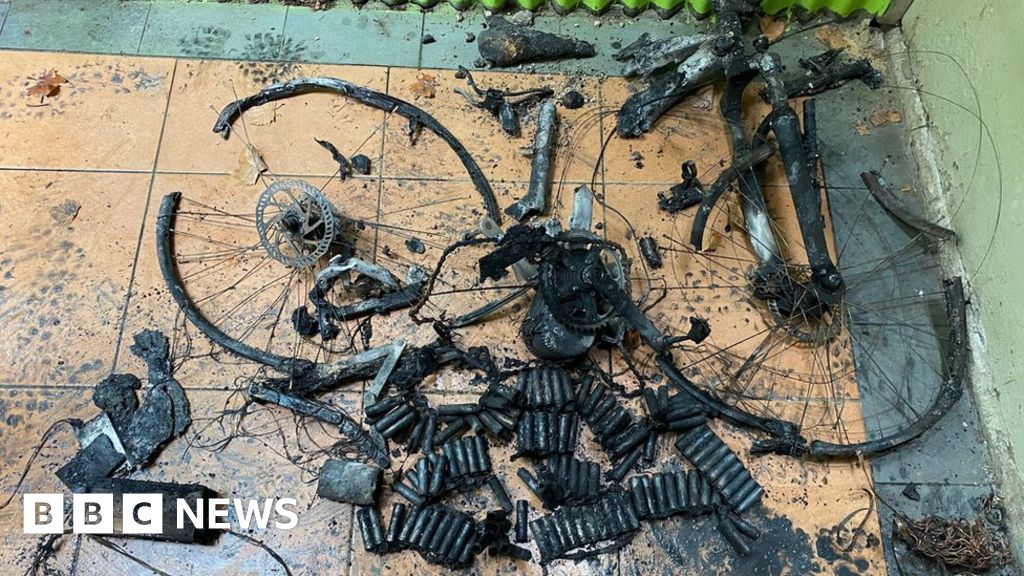 An e-bike left on charge overnight is the suspected cause of a huge house fire in Australia, firefighters say.

The three-level house in Sydney became engulfed in flames and more than 20 firefighters were called to the scene.

All seven people in the house managed to escape the blaze.

New South Wales Fire and Rescue said four of them left the building safely, two others took refuge on a balcony and one stayed inside the home. Firefighters were able to rescue them.

The fire department reminded people to only charge e-bikes with the genuine manufacturer’s charger, to do so away from where people sleep, and to ensure damaged battery packs are fixed by an authorised repairer.

“Thankfully the occupants had a working smoke alarm which alerted them to the fire,” it added.

media captionHow to upgrade your bike into an electric bicycle The investigation covers all Tesla cars since 2014, focusing on crashes with emergency vehicles.
Read more

As of Friday, there were a total 134 confirmed cases of COVID-19 across more than 50 K-12 schools in the district and over 1,000 students have been sent home due to exposure.
Read more

Has HMD-led Nokia missed the trick by delaying software updates? The Android 11 update on Nokia 5.3 arrives right before the announcement of Android 12.
Read more

A 96-year-old woman is on trial outside Hamburg, Germany, accused of being an accessory to the murder of thousands of people at a Nazi concentration camp. This could be the last trial of its kind. Charlie D’Agata reports.
Read more

India captain Virat Kohli says his side "love being written off" after the tourists recovered from finishing 191 all out in the first innings to seal a "special" 157-run victory over England in the fourth Test at the Oval.
Read more

China ready for ‘friendly’ relations with Afghanistan after Taliban...

China on Monday said it is ready to pursue "friendly and cooperative" relations with the Taliban after the insurgent group took control of Afghanistan's capital city of Kabul and brought about the fall of the country's go...
Read more

First Inverse Bitcoin ETF to Debut for Betting on...

Canada is once again beating the U.S. in a Bitcoin milestone, as the first inverse Bitcoin exchange-traded fund will debut Thursday on the Toronto Stock Exchange.
Read more

Alex Orchin expects to take up to three weeks to complete his journey in a Peel P50.
Read more

Nation’s most restrictive abortion ban goes into effect in...

As CBS News' Ben Tracy reports, a controversial Texas law banning abortions after six weeks of pregnancy went into effect Wednesday, after the U.S. Supreme Court didn't act on a request from pro-abortion rights groups to block it. Then, Jacqueline Ayers, the …
Read more

A man held for killing five people was a convert to Islam who had shown signs of radicalisation, police say.
Read more

Two weeks ago, I wrote that GameStop Corp.’s “fourth-quarter earnings are going to be the financial event of the season.” Well, it’s all happening today after the market closes. There will be an investor conference call at 5 p.m. New York time. That should b…
Read more

President Biden on Wednesday evening urged Congress to pass gun legislation, calling on Senate Republicans to support House-passed bills on the matter.During a speech made to a joint session of Congress in the Hous...
Read more

Royal Caribbean International on Friday announced a change in its policy, saying vaccinations against the coronavirus will be optional for cruise ship passengers.
Read more

Just days before his brother started selling billions of dollars worth of Tesla shares, Kimbal Musk, a Tesla board member, sold $108 million worth of his own stock in the company.
Read more

iPhone 13 notch: will Apple switch to an under-display...

Apple, Google and Samsung are all (allegedly) developing in-display cameras. But will the iPhone 13 (or iPhone 14) have one?
Read more

Watch Belgium's best goals from Euro 2020 qualifying which saw them win all 10 of their games.
Read more

Hispanic-owned businesses across the country are getting a much-needed boost after some were shut out from government programs aimed at helping them recover from the pandemic. CBS News correspondent Elise Preston reports from New York.
Read more

Arrests are made as protesters demand the release of the opposition leader, who is on hunger strike.
Read more

Biden says expanding Medicare to include hearing, dental and...

President Biden said Thursday that expanding Medicare to include hearing, dental and vision benefits would be a "reach" amid ongoing negotiations with Democrats over his sweeping economic agenda.
Read more

Progressives, Republicans, and anti-sexual harassment advocates have spent recent days arguing that members should continue with their plans.
Read more

Data show the company is booming, with room to grow.
Read more

The U.S. intelligence community has launched a new panel of experts to investigate the "anomalous health incidents" affecting dozens of U.S. personnel around the world.
Read more

More than 7 million Americans are set to lose their unemployment aid immediately after Labor Day, even as the delta variant poses new challenges to the economic recovery.Gig workers and other unemploye...
Read more

The 15 Best Weekend Deals on Games, Storage, and...

Whether you want to save time on grocery runs or need a new phone, there’s a discount here for you.
Read more

‘Building Back Better’ means a different kind of disaster...

While we wait for the inevitable next disaster, those of us not directly impacted can prepare to help, and we can respond differently than we did 16 years ago.
Read more

With the U.S. closing in on President Joe Biden's goal of injecting 100 million coronavirus vaccinations weeks ahead of his target date, officials say the nation is now in position to help supply neighbors Canada and Mexico with shots
Read more

Twenty-three people were shot, including two fatally, in the Sunday shooting at the El Mula Banquet Hall.
Read more

Myanmar: The woman who jumped to her death while...

Wai Wai Myint was among five people who jumped out of a building while fleeing a police raid in Myanmar.
Read more

Do You Have Enough Goods To Survive In The...

The panel discusses how long they each think they could be alone in the woods without knowing how to start a fire and what they would do if they were faced by a bear.
Read more

Former Argentine President Mauricio Macri has been charged with illegally spying on relatives of sailors whose submarine sank in 2017, a loss that was one of the most embarrassing incidents of his presidency
Read more

Authorities confirmed Friday that a 9-year-old girl died in an apparent drowning last week after attempting to cross over the Rio Grande into the United States.
Read more

Greece erects fence at Turkey border amid warnings of...

A 40km (25-mile) barrier is placed at the land border amid warnings of a surge of Afghan migrants.
Read more

The match had to be abandoned as fireworks from a nearby display fell on to the Pitsea pitch.
Read more

House Republicans' removal this week of Rep. Liz Cheney (R-Wyo.) as their conference chair and an updated Centers for Disease Control and Prevention (CDC) guidance on vaccinated individuals are expected to dominate ...
Read more

How the Justice Department swept up records of two...

The subpoena that swept up the records of two Democratic congressmen, their staff and family members in 2018 appears to have been the result of a leak investigation that initially included scrutinizing a senior aide on the House Intelligence Committee, and no…
Read more

Graham: Biden has been ‘very destabilizing’ in first 100...

Sen. Lindsey Graham (R-S.C.) accused President Biden of taking "destabilizing" actions during his first months in the Oval Office, arguing during a "Fox News Sunday" appearance that the president's foreign policy has been...
Read more

The 22-month-old Russian girl was found alive by a search party, four days after she wandered off.
Read more

The PM's wife, who is expecting a baby, says she is "feeling great" after having her second vaccine.
Read more

Follow comprehensive live coverage of Wimbledon on BBC TV, Red Button and BBC Radio, plus watch up to 18 courts on the BBC Sport website and app.
Read more

Russian and Chinese warships held their first joint patrols in the Western part of the Pacific ocean on October 17-23, Russia's defence ministry said in a statement on Saturday.
Read more

Syrian family reunited, against the odds, in Greece

Torn apart in the deadly chaos of an air raid, a Syrian family of seven has been reunited, against the odds, three years later at a refugee shelter in Greece’s second city of Thessaloniki
Read more

Scott Colyer on the Markets (Radio)

Congress is under new pressure to keep millions of Americans in their homes after the Supreme Court blocked the ...
Read more

The incident comes weeks after a gas leak caused a fire on the ocean's surface near another platform.
Read more

Every person is assigned a gender at birth, male or female. But when you don't feel like you identify with being a man or a woman, it can be a long journey to understanding what your gender identity is.
Read more

Bryan Webb, 90, says he carried on working with Vauxhall in Gloucester because it kept him young.
Read more

Having to Choose Between a Shot and Work

Phones launched in May 2021 in India

As many as 7% of French firms could be in financial trouble when the government rolls back the blanket support it has provided during the pandemic, according to research by Bank of France economists.
Read more

CBS Radio News correspondent Steve Dorsey is by the White House, where protesters have climbed a crane and appear to be unraveling a sign.
Read more

Seattle Seahawks' wide receiver DK Metcalf's speed went viral last season when he ran the full length of the pitch to catch an opponent during an NFL game, but he isn't quite quick enough for the Tokyo Olympics.
Read more

To Mask or Not on the London Underground

The Los Angeles Police Department (LAPD) said Tuesday that a woman has accused R&B singer Chris Brown, who has faced multiple past allegations of abuse and assault, of hitting her, ...
Read more

Reality has no bearing at a Disney theme park -- which is part of the parks' appeal to many LGBTQ fans. The parks provide a candy-coated alternate world where no one questions whether they belong.
Read more

Granholm defends US emissions targets: ‘If we don’t take...

Energy Secretary Jennifer Granholm defended U.S. carbon-neutrality targets in testimony before the Senate Appropriations Committee on Wednesday, saying the U.S. has no choice but to take action regardless of Chinese efforts to reduce their own emissions.
Read more

Unusual Corn Cargo Is About to Hit U.S. Shores