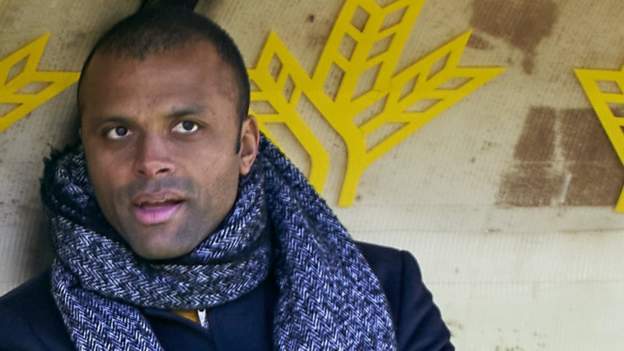 Maheta Molango left his job at Real Mallorca in February 2020

Ex-England defender Gary Neville has defended the choice of Maheta Molango as the next chief executive of the Professional Footballers’ Association.

Neville was one of four independent non-executive directors to recommend Molango should succeed Gordon Taylor.

The players’ board has approved the appointment, but it is not yet formal.

Neville says criticism of the Swiss, 38, has been “disparaging” and claimed there were “elements of xenophobia” around some of the reporting.

Neville said: “It’s clear that football is resisting this appointment through feeding journalists with negative information about the candidate, what he can’t do, why he shouldn’t be there and the process is wrong.

“It’s actually the first time that there has probably been a truly independent process within English football around the appointment of a CEO from four independent non-executives.”

A statement from the players’ union has said that the PFA “will now look to finalise terms” with Molango, who qualified to be a lawyer in Spain after retiring from playing.

“This candidate has the skill set, he’s representative of the membership and, before he even gets in seat, it’s almost as if it’s been determined whether he’s good enough or not,” added Neville.

“It is critical that everyone is facing in the right direction. If not, there will be difficult times ahead. I wish the new candidate all the best. I hope the members validate and accept his appointment.”

Analysis – Who is Maheta Molango?

Brighton fans might remember Molango as the young striker – signed by Mark McGhee when the club was skint – who scored 12 seconds into his debut and not much more after that.

But those who got to know Molango more closely have not been surprised at how his career has developed.

He speaks five languages and had an eye on the future when he arrived in England as he took a law degree that eventually led to his relocation to Washington DC.

The impression Molango made when he moved to Spain was positive enough to get him head-hunted for the chief executive’s job at Real Mallorca by owner Robert Sarvar.

He spent just over four years in charge of Real Mallorca, guiding the club back to La Liga following successive promotions, before losing his job in early 2020.

Those who know Molango describe him as ‘amenable, friendly and sociable’, someone who doesn’t forget his friends but is also intelligent and articulate.

“If you look at his background, I would have thought he offers a unique set of credentials,” said one source. Your Weekend Reading: Crypto Fans Should Prepare for Stricter...

Sainsbury’s: Cost of Covid has been high

While full-year sales jumped 8% the supermarket giant made a loss due to pandemic costs.
Read more

Lee Elder: First black golfer to compete in the...

Lee Elder, the first black golfer to compete in the Masters, joins Jack Nicklaus and Gary Player for the honorary start to this year's event.
Read more

Optus’ new SubHub lets you bundle your subscriptions together...

Optus SubHub brings subscriptions into one place, with Amazon Prime available at launch and other big streamers to follow.
Read more

Our current ransomware deterrent strategy is “simply not working”,...

President Biden says he will "deliver" a message to Russian President Putin over the massive global ransomware attack, believed to have originated in Russia. Maurice Turner, a cybersecurity fellow at the Alliance for Securing Democracy, joins CBSN's Lana Zak …
Read more

Two people have reportedly been arrested after President Macron was slapped as he toured France.
Read more

Biden is stuck in the 1950s, sure that private corporations are the enemy and Big Labor is the solution.
Read more

Sen. Ron Johnson, R-Wis., has been suspended from uploading videos to YouTube for seven days and had a video of a speech talking about early treatments to COVID-19 removed by the video-sharing giant.
Read more

A company's core values are the most important part of its culture and ethos. As a leader, it's your job to enforce and live those values every day.
Read more

The NYPD is looking for the suspect in the brazen killing.
Read more

FAA Fines for Unruly Passengers This Year Surge Past...

The wave of air rage as U.S. airlines attempt to return to normalcy while the pandemic subsides has reached unprecedented levels, according to data released Tuesday.
Read more

Between hard hitting, fast skating, a torrid pace, spectacular goaltending — Game 1 of the first-round series between the Minnesota Wild and Vegas Golden Knights on Sunday had everything but a goal in regulation.
Read more

Audit Scotland said progress on narrowing the gap between the richest and poorest pupils has been limited.
Read more

Residents were evacuated after the building in East Kilbride suffered extensive damage in the incident.
Read more

Adobe Premiere Rush has been given native support for Apple M1 computers, while Premiere Pro gets a speed boost on Windows.
Read more

Scotland: Declan Gallagher on his road to redemption from...

Scotland centre-half Declan Gallagher opens up on his life journey to the European Championships with Scotland.
Read more

What Happened to Evergrande and China’s Real Estate Market?

A deep dive into the mechanics of the world's most indebted real estate company.
Read more

One in seven bookings failing to show up at...

A report looking into the issue of no-shows says the hospitality sector loses £17bn a year from it.
Read more

Former President George W Bush is speaking out on the government's collapse in Afghanistan, expressing his sadness over the Taliban's swift takeover of the country.Bush and former first lady Laura Bush said in a jo...
Read more

The political action committee founded by former Georgia House Minority Leader Stacey Abrams (D) has raised more than $100 million since it was founded just over two years ago, putting it among the top raising polit...
Read more

Tucker Carlson tells Americans they should not be shamed into not asking questions about the coronavirus vaccine, as bureaucrats worry about a "pandemic of the unvaccinated."
Read more

‘Crisis of trust’: France bristles at US submarine deal

Ubisoft India Studios has appointed Syed Abbas as its new managing director. He has worked his way up from the role of a producer.
Read more

The Ragnarok ransomware group has shut down its operations without notice though a master key is now available on its leak site.
Read more

The coronavirus pandemic was the most important issue among California voters in Tuesday's failed recall election against Gov. Gavin Newsom (D), according to exit polling.Roughly one-third of Cal...
Read more

‘I would do it again’: Suspect accused of pummeling...

The Brooklyn man accused of beating a Jewish man in a hate attack in Midtown proclaimed from his jail cell that he would “do it again,” prosecutors said on Saturday.
Read more

The verses are thought to have been written by Jewish rebels hiding in the cave from Romans.
Read more

At least eight people have been killed and 34 were wounded in shootings across Chicago this weekend, reports said.
Read more

Will tech be entangled with the Capitol riot probe?...

This venerable security vulnerability has exposed millions of routers...

The Bill and Melinda Gates Foundation has spent tens of billions of dollars to fund improvements in global public health. Melinda Gates sits down with Jane Pauley to discuss her long-held commitment to science and data, and how it is vital to combating hunger…
Read more

The history-making Democrat will take the role after Andrew Cuomo resigned over harassment claims.
Read more

Why vaccine incentives weren’t the best answer to hesitancy:...

After two months of cash offers and other incentives, states across the country are still struggling to get their vaccine doses up.
Read more

Fitbit Labs is launching a blood pressure study to potentially measure Pulse Arrival Time (PAT), or the “time it takes for a pulse of blood to reach your wrist after your heart beats.” It wants to explore the potential link to tracking blood pressure and need…
Read more

Fox News contributor Tom Homan said there is no need for Vice President Kamala Harris to go to Guatemala to try to end the migrant surge because President Biden's policies are the root cause of the issue.
Read more

The Phoenix Suns took a two-game series lead in the NBA Finals on Thursday night with a victory over the Milwaukee Bucks, 118-108.
Read more

US home prices soar at record pace in June

U.S. home prices jumped by a record amount in June as homebuyers competed for a limited supply of available houses, the latest evidence that the housing market remains red-hot
Read more

The Cost of American Inequality

Fed’s Powell to Give Virtual Remarks at Jackson Hole...

Left-wing activists and relatives of people killed in Philippine President Rodrigo Duterte’s anti-drug campaign have marked the start of his last year in office with a noisy protest and a “countdown toward achieving justice.”
Read more

Rep. Matt Gaetz (R-Fla.), who is currently the subject of an FBI probe, had a chance Thursday to question the man leading the agency responsible for investigating him.Gaetz came face-to-face with FBI Director Chris...
Read more

White supremacy, with a tan

White people are projected to become a minority in the US by 2045, but that by itself won't make the country more racially tolerant. Never underestimate White supremacy's ability to adapt.
Read more

The discovery could have implications for Earth's magnetic field, a scientist involved in the study has said.
Read more

Realme GT Neo 2 to launch in India on...

The successor to the Realme X7 Max in India will be launched next week.
Read more

Former President Carter honored his former Vice President Walter Mondale after Mondale died on Monday at the age of 93."Today I mourn the passing of my dear friend Walter Mondale, who I consider the best vice presi...
Read more

A Kenyan sprinter was suspended from the Olympics after he received a positive steroid test.
Read more

Mars helicopter gets extra month of flying as rover’s...

The businessman, politician and sports club owner was one of France's most recognisable figures.
Read more

Goldman Sachs mandates vaccines for US staff and visitors

Staff, clients and visitors will all need to be double jabbed to enter to investment bank's offices.
Read more

Covid-19 vaccine boosters are now authorized for some. Here’s...

Vaccine makers are preparing for a next possible phase of the Covid-19 vaccine rollout: booster doses.
Read more

A North Carolina-based hospital system has fired 175 employees for failing to comply with its COVID-19 vaccine mandate.Novant Health had said last week that approximately 375 of its 35,000-member workforce was non-compliant with the...
Read more

Armani shows off scar from arm fracture in recent...

Coronavirus: Israel to give third jab to people aged...

It will be the first country to offer such a Covid booster amid a recent surge in infections.
Read more

China to Tighten Rules on Data, Overseas Listings After...