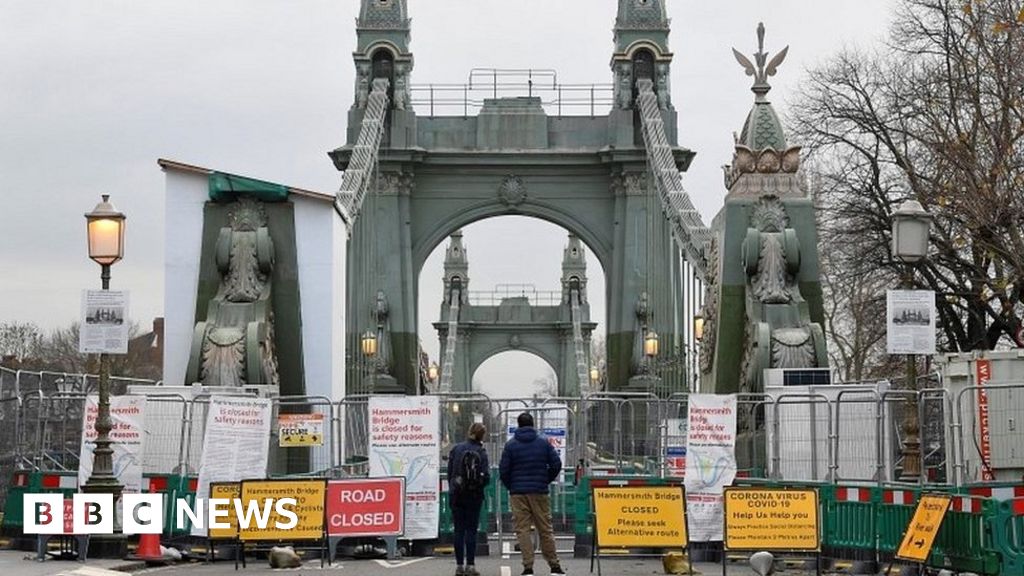 Motorists could be charged to cross London’s Hammersmith Bridge in order to pay for its repair.

The 134-year-old crossing was entirely closed last year when cracks in the pedestals worsened during a heat wave.

Hammersmith and Fulham Council has suggested that motorists pay to use a temporary double-decker structure which would be put in place while the original bridge is mended.

It could be ready for traffic from the summer of 2022, the council said.

The plan for a double-decker structure, which would be installed within the existing crossing, was proposed following a feasibility study carried out by architects Foster and Partners and bridge engineers COWI.

An upper level would carry cars and buses, while pedestrians and cyclists would use the lower level.

Repairs to the original bridge could then take place around them.

The council, which owns Hammersmith Bridge, said the plan would help reduce restoration costs to “around £100m” and allow traffic to use it from the middle of 2022.

The full restoration of the bridge could then be completed by 2023. It had previously been suggested the crossing would not fully re-open until 2027.

To help pay for the repairs, motorists would be charged a toll using the same automatic number plate recognition technology put in place for the congestion charge.

“Early assessments” indicated they would pay “an average of £3” to cross, the council said.

The council has also suggested the ownership of the bridge should be transferred into a charitable trust.

Council leader Stephen Cowan said: “Hammersmith Bridge is one of the oldest suspension bridges in the world and the most expensive in Britain to repair.

“We’re determined to put in place the necessary governance and long-term funding arrangements that will make sure it is properly maintained well into the next century.”

The plans will be discussed at the upcoming Hammersmith Bridge Taskforce meeting, which is set to take place next week. Celebrating commercial flops at the Museum of Failure

The Museum of Failure in Los Angeles celebrates ideas that failed to get off the ground for some of the biggest companies in the U.S. CBS News correspondent Jamie Yuccas gives us an inside look.
Read more

Pet tiger seen on the loose in Houston moved...

A pet tiger named India that was seen on the loose in a Houston neighborhood earlier this month has been turned over and moved to an animal sanctuary.
Read more

Police in Washington, D.C. say that a woman has been killed after being shot in the head while sitting in a gym parking lot and the suspect is on the loose.
Read more

Public schools in the state will no longer be barred from mandating face masks — for now.
Read more

EXPLAINER: What is behind the latest unrest in N...

Young people have hurled bricks, fireworks and gasoline  bombs at police and set hijacked cars on fire during a week of violence on the streets of Northern Ireland
Read more

Banks are encouraged to scrap Libor for pricing derivatives contracts from mid-June, Britain's financial regulators said on Thursday, piling pressure on markets to speed up the long-anticipated demise of the tarnished interest rate benchmark.
Read more

The U.S. Supreme Court rejected a New Hampshire challenge to Massachusetts’ practice of taxing people who once worked in that state but started telecommuting from elsewhere during the pandemic.
Read more

Two people were killed and several injured when a gunman opened fire on Tucson EMT crewmembers and then-- in a separate shooting-- firefighters arriving at the scene of a burning home, a report said.
Read more

Watch the best plays of the season from the NBA, including shots from LeBron James, Luka Doncic and a flashy Brooklyn Nets' play finished by Kevin Durant.
Read more

Climate change: Israel to cut 85% of emissions by...

Formal start of final phase of Afghan pullout by...

Thousands of National Guard troops were dispatched to the Capitol grounds in the wake of a Jan. 6 insurrection by a mob supporting former President Donald Trump that sought to delay the certification of the presidential election.
Read more

Luxury brand Coach announced that it will no longer destroy damaged or "unsaleable" goods returned to its stores, after a viral TikTok video claimed the label intentionally "slashed" unwanted items for tax purposes.
Read more

Presented by Our Health California THE BUZZ A bipartisan effort to break up Big Tech is also fracturing Californians from other members. Its not every...
Read more

President Biden teased incentives to push Americans to get the coronavirus vaccine. He set a goal of having 70% of U.S. adults at least partially vaccinated by July 4. Nancy Cordes reports.
Read more

A federal judge ruled on Friday that the National Archives and Records Administration (NARA) has to ensure that Immigration and Customs Enforcement (ICE) keeps records about sexual assault and detainee deaths....
Read more

Biden to highlight jobs and families plan ahead of...

President Biden on Wednesday will highlight the need for investments in human infrastructure and clean energy, which are elements of a massive jobs and families plan that Democrats expect to pass through reconciliation....
Read more

Warm Christmas breaks records in parts of the U.S.

Oklahoma slipped by Missouri to win 72-68 in the first round of the NCAA Tournament.
Read more

7 new streaming movies and TV shows you can...

Our top Aussie streaming picks this weekend include The Witcher: Nightmare of the Wolf and The Walking Dead.
Read more

Loki was supposed to die in the worst MCU...

Loki on Disney Plus may not have happened if Marvel Studios had stuck to its initial plan for the God of Mischief – here's why.
Read more

Secretary of State Antony Blinken on Tuesday announced that he has invited the United Nations' envoys on racism and minority issues to visit the U.S., a move that immediately drew criticism.
Read more

A massive cyberattack is spreading through Europe, affecting computer systems of government institutions, banks, airports and businesses. Ukraine was hit particularly hard, with officials calling this the worst such attack in the country's history. Cybersecur…
Read more

For a second straight month, U.S. job growth proved to be bitterly disappointing in September, coming in more than 300,0…
Read more

The US president and his aides wish to avoid being drawn into this graveyard of US-led peace initiatives.
Read more

Volcanic activity has raised fears of a rare eruption at Lake Kivu in the country's east.
Read more

Hyperdrive Daily: Elon Musk and the Art of Exposure

The White House is reportedly reconsidering raising the refugee cap after abandoning earlier plans for an increase, ...
Read more

Covid-19: Oxford-AstraZeneca jab ‘not linked to clots’ and hairdressers...

The software developer is changing – and so is...

The software developer is changing – and so is their workflowtechradar.com
Read more

Leylah Fernandez and Emma Raducanu will battle in the U.S. Open final on Saturday.
Read more

In World War II John Billings flew more than 50 combat missions, including missions for the U.S. Office of Strategic Services, the forerunner to the CIA
Read more

Uma Thurman details getting an abortion at 15 in...

Uma Thurman says she's revealing her "darkest secret," detailing getting an abortion when she was 15 to illustrate her opposition to Texas's controversial new abortion law."I have followed the course of Texas's rad...
Read more

An Oklahoma man who took part in the Jan. 6 U.S. Capitol insurrection and took a beer from a refrigerator in the building has pleaded guilty to a misdemeanor
Read more

Football Focus discusses the Newcastle United takeover story, what it means for the city, the club and the current manager Steve Bruce.
Read more

Ex-Wales captain and coach Rob Howley tells BBC Scrum V about his long road back after his nine-month ban from rugby.
Read more

After Carl Nassib comes out, this Hall of Famer...

The Houston Astros shook off the hitting woes that plagued them for most of the last week, slugging four home runs in a rout of the Seattle Mariners.
Read more

Antitrust Bills Have Some Democrats Asking Pelosi to Slow...

A group of centrist Democrats have asked House leaders to slow down consideration of a half-dozen antitrust proposals virulently opposed by the big tech companies the bills target.
Read more

Dafydd Thomas was found dead in Minffordd, near Penrhyndeudraeth in Gwynedd, on Thursday.
Read more

Hiroshi Sasaki had proposed that plus-size entertainer Naomi Watanabe appear at the opening ceremony as a pig.
Read more

Singapore said it is closely watching the supply of vaccines, as the city-state remains committed to inoculating its adult population by year-end amid snags in rollouts around the world.
Read more

Hon Hai Precision Industry Co. warned that the global supply crunch that has hit the consumer electronics and automaking industries will worsen this quarter, after it weathered component shortages to post better-than-expected quarterly profits.
Read more

Programming note: Money Stuff will be off tomorrow, back on Wednesday.
Read more

What to know about DACA being ruled illegal

A federal judge in Texas on Friday ruled that the Deferred Action for Childhood Arrivals program is unlawful. The decision, by US District Judge Andrew Hanen of the Southern District of Texas, injected uncertainty into the lives of hundreds of thousands of yo…
Read more

Binance Holdings Ltd., the largest cryptocurrency exchange, is being investigated by the Commodity Futures Trading Commission over concerns that it allowed Americans to place wagers that violated U.S. rules, according to people familiar with the matter.
Read more

Welcome to The Hill's Morning Report. It is Friday! TGIF! We get you up to speed on the most important developments in politics and policy, plus trends to watch. Alexis Simendinger ...
Read more

Syrians vote in election certain to give Assad new...

Fox News Media Tuesday filed a motion to dismiss a lawsuit filed against it by Dominion Voting Systems over the network's coverage of claims it faced of election irregularities during the 2020 presidential race.The...
Read more

The 2022 Tour of Britain will depart from Aberdeen, 12 months on from the city hosting the final stage of this year's event.
Read more

Washington's peace envoy says a Qatar Airways flight has taken more Americans out of Afghanistan, the third such airlift by the Mideast carrier since the Taliban takeover and the U.S. troop pullout from the country
Read more

As Covid-19 worsens in India, Amazon helps fly in...

Abortion law move in NI will have 'serious consequences'