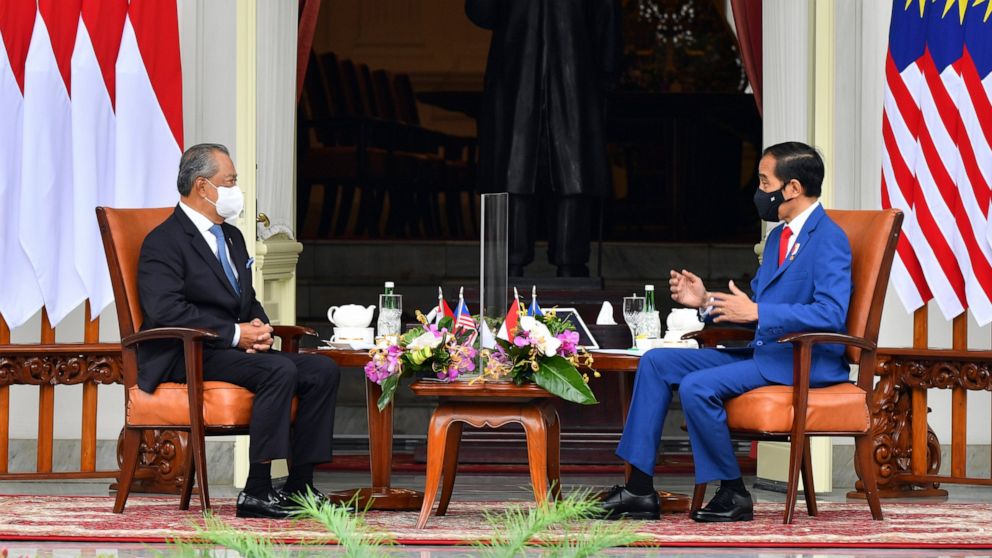 JAKARTA, Indonesia — Indonesian President Joko Widodo on Friday urged a halt to violence in Myanmar and asked the fellow leaders of Southeast Asia countries to hold a summit on the crisis.

Indonesia urges that the use of violence in Myanmar be stopped immediately to avoid more victims, Widodo told a televised address, offering his condolences to the victims and their families.

More than 200 people have been killed by security forces since the Feb. 1 coup, according to credible tallies. Nearly 2,000 have been jailed.

Widodo, the leader of Southeast Asias largest economy, said that he will immediately contact the sultan of Brunei, which holds the rotating presidency of the 10-member Association of Southeast Asian Nations, to set up an ASEAN summit to address Myanmars turmoil.

Brunei issued its own chairmans statement after the ministers apparently failed to agree on a declaration in the meeting where Myanmars top diplomat briefed them during a video conference. It said the ministers called on all parties in Myanmar to refrain from instigating further violence and start talks on a peaceful solution. Business owners and residents of an Atlanta neighborhood say they are being terrorized by a “Machete Man” who wields weapons in public and is accused of squatting in the neighborhood following an eviction moratorium stemming from the pandemic.
Read more

Unboxed: Oil rig in lido to form part of...

The decommissioned North Sea platform will relocate to Weston-super-Mare as part of 2022's Unboxed.
Read more

Bitcoin is hanging tough amid a slew of negative headlines, extending its rally for the third day and lifting the spirit of battered bulls.
Read more

Harry Wilson misses a penalty as a depleted Wales side are held to a goalless friendly draw by Finland in Helsinki.
Read more

The University of North Carolina-Chapel Hill did not approve tenure for New York Times Magazine journalist and ...
Read more

Lawmakers say they were in the dark on U.S....

Asked whether he was informed by Pentagon officials about the U.S. troop presence, Rep. Ami Bera said, “not particularly this deployment.”
Read more

Rwandan prosecutors have requested a life sentence for the man who inspired the film “Hotel Rwanda” as he faces terrorism charges, while his family asserts that he faces mistreatment and an unfair trial
Read more

The Taliban's advance into the capitol of Afghanistan dominated the Sunday morning talk shows, with multiple guests discussing the apparent imminent fall of the government.Secretary of State Antony Blinken argued t...
Read more

The baby elephant was separated from its herd when it fell into a pit.
Read more

Stop Doomscrolling and Grab a Game Controller Instead

Before you think this is about trading one unhealthy habit for another, it’s not like that. Here’s why.
Read more

Republican Lt. Gov. Geoff Duncan of Georgia, a vocal critic of former President Trump, on Monday announced that he won’t seek a second term in office in next year’s elections.
Read more

A player named Beckham was back on the football pitch on Sunday - but it wasn't David who was drawing in the crowds in the US, it was his son, Romeo.
Read more

Fox News host Tucker Carlson claimed that "the standards that big news organizations use to cover shootings depend entirely on the political views of the people who get shot" on Wednesday.
Read more

Swamy, who had tested positive for Covid in May, died of a cardiac arrest.
Read more

Social media videos show hundreds of people gathered on the steps outside the Senedd.
Read more

Real Madrid failed in their attempt to sign France striker Kylian Mbappe this summer, but Paris St-Germain face losing him for nothing next year.
Read more

In celebration of our 50th anniversary, I am deeply humbled to share that Disney is granting a total of $3 million to six amazing nonprofit organizations in Central Florida, helping to support important causes and inspire a world of difference for children an…
Read more

Want the lowdown on European markets? In your inbox before the open, every day. Sign up here. LG Electronics Inc. may shutter its mobile...
Read more

The road to permanent remote working

Permanent remote-working is inescapable now. Here's how SMBs can overcome the challenges that await.
Read more

Renault Group is working with Google and Qualcomm Technologies to design what it hopes will be a “rich and immersive” in-vehicle experience for the new E-TECH Electric range of the Renault Megane.
Read more

Meme Stock AMC Is Offering Its Investors Popcorn. How...

There could be no better gift to shareholders than the alluring kernels of puffed-up nothingness.
Read more

Belita Ong on the Markets (Podcast)

Makers of the Mexican spirit mezcal have had a tough lockdown, but hope to see sales rise again.
Read more

Yellen: “Global race to the bottom” in corporate tax

The US Treasury Secretary is working with other countries as the US eyes tax hikes.
Read more

A French court convicted 11 people of cyberbullying a teen who criticized Islam on her social media accounts on Wednesday, according to ...
Read more

India opener Smriti Mandhana makes her highest score in Tests, but the first day of the one-off day-night Test against Australia is heavily affected by rain in Carrara.
Read more

Wireless charging on smartphones: what could the next 10...

Wingate fire: Ex-marine’s home destroyed ‘after standing up to...

Sean Ivey believes he was targeted after standing up to anti-social behaviour in his village.
Read more

The Sony HT-X8500 may be the best value soundbar you can buy.
Read more

Next deal keeps Gap brand alive in the UK

Deal means Gap will still have a UK high street presence within Next's stores despite closing its own.
Read more

Houston Methodist Hospital in Texas confirmed its first case of the lambda variant Monday as COVID-19 cases climb in the state.
Read more

The Reserve Bank of India's monetary policy committee kept interest rates steady at record lows on Friday, as widely expected, but traders are awaiting comments about inflation and liquidity normalisation for further clues on the outlook.
Read more

The Google Nest Cam (battery) is the brand’s latest home security camera, offering facial recognition smarts and flexibility in where it can be mounted.
Read more

Why Don’t We: US boy band accuse manager of...

US group Why Don't We claim they were made "hostages in our own home" and had their food restricted.
Read more

Actress Melissa Joan Hart on Wednesday revealed that she contracted the coronavirus, despite having been fully vaccinated.The star best known for her role in "Sabrina the Teenage Witch," shared a video to Instagram...
Read more

The men accused of plotting to kidnap and kill Michigan Gov. Gretchen Whitmer (D) on Tuesday asked a court to subpoena Twitter over a troll account. In...
Read more

Chrome is getting a powerful screenshot and sharing tool

England fast bowler Mark Wood has recovered from the shoulder injury that kept him out of the innings victory at Headingley.
Read more

An Iowa man on Wednesday pleaded guilty to shooting into a car with four Black teenage girls inside who had been arguing with Trump supporters, seriously injuring one of the girls.Michael McKinney, 26, pleaded guil...
Read more

Chicago police union president is telling members to not...

The Chicago police union is just days away from the city's deadline for a vaccine mandate, but many may not comply
Read more

The Treasury Department on Monday launched the process of distributing $350 billion in aid for state and local governments allocated through the COVID-19 relief bill signed by President Biden in March. ...
Read more

Glasgow Warriors complete their Pro14 campaign and finish fourth in Conference A by seeing off Benetton at Scotstoun.
Read more

Plenty of high-income Americans say they’re having trouble paying the bills during the pandemic, according to new data from the Census Bureau.
Read more

Internet videos of pets and animals are more than just fun; they can also inspire. Correspondent David Pogue looks at the evolution of animal videos. (This story originally aired November 27, 2020.)
Read more

Lululemon to Seek New CEO for Mirror Unit as...

Lululemon Athletica Inc. is looking for a new chief executive officer for its Mirror unit as its leader steps down just over a year after the at-home fitness company was acquired.
Read more

A 10-month-old baby briefly left unattended by her father at their North Carolina home was killed Tuesday night by a pair of family Rottweilers, according to the Johnston County Sheriff's Office.
Read more

Here’s why you should invest in a Dell Latitude...

Dell’s Latitude laptops are one of the best laptops that you can buy if you’re in need of a capable and reliable business laptop. Here’s why.
Read more

Cardinals first baseman Paul Goldschmidt was not in the starting lineup against Milwaukee on Thursday because of lower back tightness.
Read more

Though Huawei and Honor are no longer officially connected, the Honor 50 and Huawei P50 might look pretty similar.
Read more

A new report revealing that Google and the USAID-funded Wuhan scientist Peter Daszak’s virus experiments for over a decade unearthed what could be considered one of the "biggest scandals" of our time, Steve Hilton said Monday.
Read more

The Memo: ‘Hillbilly Elegy’ author binds himself to Trump...

J.D. Vance, the best-selling author, was once a stern critic of former President Trump.Now, as a candidate for the Republican Senate nomination in Ohio, he is a big Trump fan....
Read more

Former football star Herschel Walker’s entrance into the nascent Senate contest in Georgia is injecting a new air of uncertainty into one of the closest-watched races of the 2022 midterm cycle. At the outset of his campaign, Walker has some key...
Read more

Planning my ‘big Greek wedding’ in a pandemic

Restrictions on wedding guest numbers are due to be lifted on 21 June, but couples are still anxious.
Read more

The candidate of a leftist-green coalition has easily won election as mayor of Croatia’s capital, Zagreb, marking a major blow to the governing conservatives in the European Union country
Read more

One of the best air fryers changed my life…and...

Looking to up your game when cooking fries or chicken wings? Then this air fryer Prime Day deal is too good to be missed.
Read more

Fights over the filibuster. Tensions over Israel. Bickering over police funding. And grumbling over immigration policy. As Congress heads into a hot summer in Washington, discord among Democrats has begun to bubble...
Read more

The 60-year-old, from Belfast, has absconded from HMP Maghaberry a number of times.
Read more

International Friendship Day is here and Disney is honored to reveal the first winners of the Disney Magic Makers contest! Marla Zwinggi, of Chagrin Falls, OH, and Stacey Bene, of Medina, OH, built a friendship that changed the lives of thousands of families …
Read more

'Who knows what's going on inside?' Why mental health in football matters