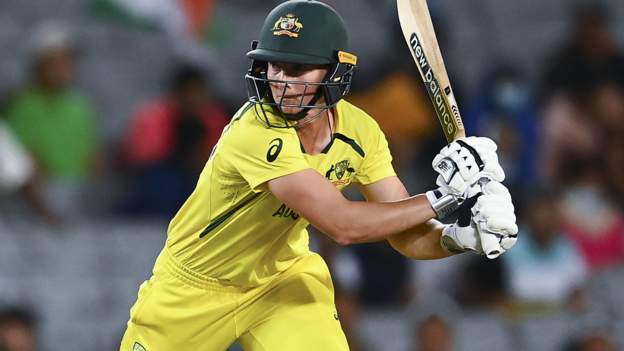 On a superb pitch, India reached 277-7 after half-centuries by Yastika Bhatia, Harmanpreet Kaur and Mithali Raj.

Australia looked to be cantering before captain Meg Lanning was out for 97 in the penultimate over.

Amid rising tension in Auckland, Australia needed eight from the final over, only for Beth Mooney to seal the six-wicket win with three balls left.

It meant Australia bettered the 258 they overhauled against Sri Lanka at the 2017 World Cup, while also posting the third-best chase in all women’s one-day internationals.

Their fifth win of the tournament takes them two points clear of South Africa at the top of the table and guarantees a place in the last four.

India will likely need to win their last two matches, against Bangladesh and South Africa, to have a chance of progressing.

Asked to bat at Eden Park, the 2017 runners-up looked to be pressurising tournament favourites Australia in front of a noisy and partisan crowd.

The true surface and rectangular dimensions of the ground posed problems for bowlers and fielding captains, with Raj, who made 68, and Yastika, 59, taking advantage in a partnership of 130.

And when India stalled, finding themselves 213-6 at the beginning of the 43rd over, Harmanpreet plundered 57 from 47 balls, adding 64 with Pooja Vastrakar in a riotous stand for the seventh wicket.

Any momentum that gained for India was stolen by the intent of Alyssa Healy, whose 72 came from only 65 balls as she and opening partner Rachael Haynes rattled along at seven an over.

Even though Australia lost two wickets for two runs, Lanning and Ellyse Perry were in complete command during their partnership of 103, manoeuvring the ball and hurrying between the wickets.

Australia’s progress was checked by a rain delay, after which Perry slapped a Vastrakar full toss to Raj at cover.

The required rate briefly drifted out to more than a run-a-ball, but Lanning found a willing ally in left-hander Mooney.

Lanning had peppered the region behind square on the off side and looked to be reaching her 15th one-day century with yet another cut, only to find the hands of Vastrakar at point.

With the India fans believing again and veteran seamer Jhulan Goswami, in her 200th ODI, bowling the final over, Mooney retained her composure.

She heaved over mid-wicket for four, took advantage of a mis-field to pinch two, then hit Goswami back over her head for the winning boundary. PwC Set to Announce Departure From Russia Over Ukraine...

U. Michigan study to help those with autism improve...

Uvalde mayor disputes that police had shot at gunman...

Cedella Marley on “Marley and the Family Band”

Heatwave: Delays on Underground as London prepares for hottest...

After Thor: Love and Thunder, Read These 5 Comics

James Harden Applauded For Turning Down $47m—’Put Some Respect...

Q&A: Trevorrow on the mauling metaphors of ‘Jurassic World’

New Microsoft 365 feature could save you from an...

Police rule out foul play after boy lost in...

Defiant Pakistani PM calls for street rallies in his...

On The Money — Breaking down the January job...

Cast Take a Wild Ride to Creativity During The...

The Elections Across Asia-Pacific Set to Impact Markets in...

Venezuela government and opposition to renew talks amid humanitarian...

Jin Yuejue on the Markets (Radio)