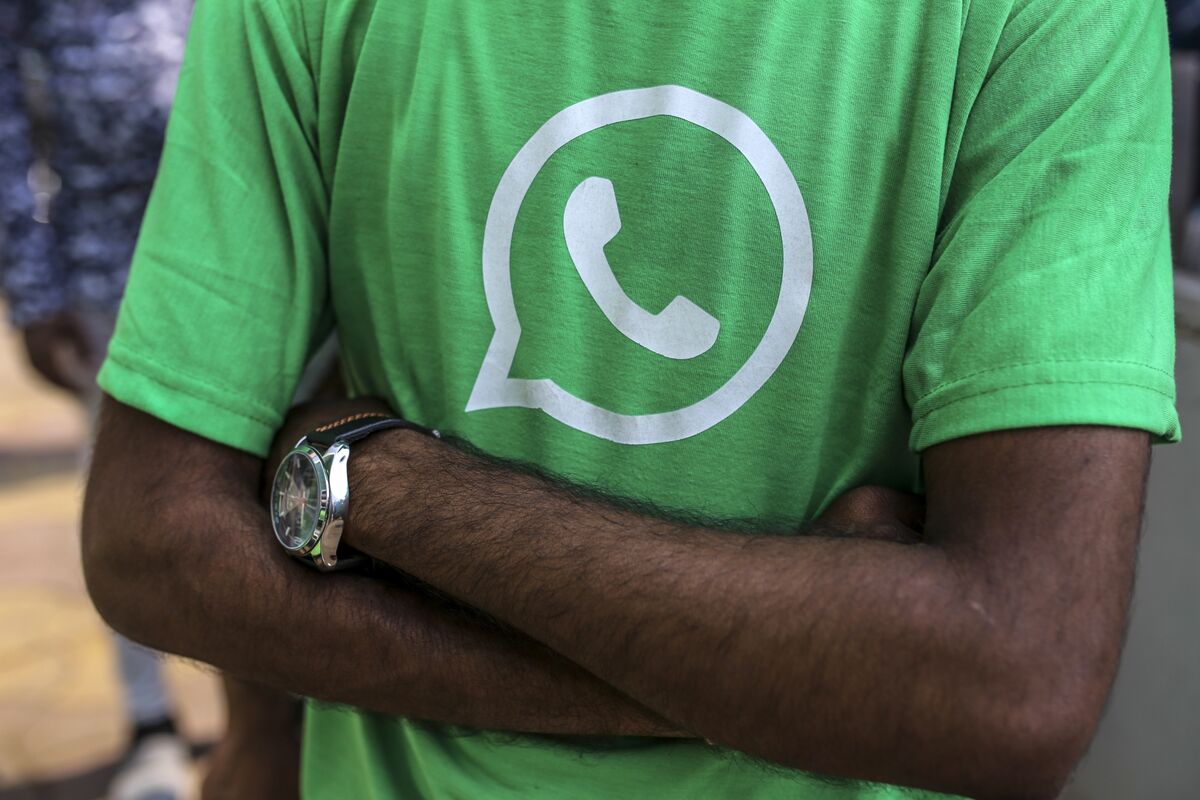 Indias federal government has urged a Delhi court to restrain

The court filing underscores the growing tussle between WhatsApp and the government of its most important market. The company is already facing challenges over the countrywide rollout of its payment service and has to contend with new guidelines that could require it to break its encryption to identify originators of unlawful messages on its platform.

Indias Ministry of Electronics and Information Technology had earlier expressed concern over the altered privacy policy and in an email asked WhatsApp to withdraw the changes that have implications for Indian users freedom of choice.

WhatsApps privacy policy violates the countrys information technology laws as it fails to specify the nature of user data being collected or notify users about it, according to the filing. It also does not guarantee that third parties getting user data will maintain confidentiality.

The court will next hear the case on April 28, Meghan said.

With assistance by Saritha Rai The billionaire dynasty behind Selfridges & Co. is considering a 4 billion-pound ($5.66 billion) sale of the British department store group following an approach from a potential buyer.
Read more

Jennifer Lopez wears what appears to be Ben Affleck’s...

“Jenny From the Block” singer Jennifer Lopez was seen wearing a shirt that “Justice League” star Ben Affleck has previously been photographed in.
Read more

The historical TV drama series is to get a second full-length feature outing later this year.
Read more

At least 7 dead in multi-vehicle pileup in Utah...

At least ten others were hurt, several of them critically, authorities said. Five of the dead were kids.
Read more

With the Adobe Creative Cloud Photography plan you can get access to image editing software along with cloud storage.
Read more

Secretary of State Antony Blinken to travel to Qatar...

Blinken also said the State Department is "constant contact" with Americans in Afghanistan who may wish to leave.
Read more

Biden to announce vaccine mandate for all federal employees:...

President Joe Biden told ABC News on Tuesday that a mandate to require all federal employees to be vaccinated from COVID-19 was "under consideration."
Read more

Philips Hue vs Lifx: which smart lights are right...

Philips Hue and LIFX are big names when it comes to smart lighting, but which you should choose?
Read more

In its first year, the initiative will enable access to computer science learning and career opportunities for more than 1 lakh students from 900 government and aided schools across 7 States.
Read more

Soon-to-be newlyweds lined up out the door of the marriage license office in Las Vegas ahead of a unique date to tie the knot: 4/3/21
Read more

Republican George Santos on Thursday announced his candidacy for Congress in a mostly suburban district on New York’s Long Island that the GOP is eyeing.
Read more

FutureLearn is a good platform for those looking to earn certificates online but the lack of smartphone apps is a major downside.
Read more

Scottish election 2021: How will pupils catch up on...

How well are schools bouncing back from Covid and how are pupils catching up with lost education?
Read more

The death of a high school student has exposed...

"Truth! Truth! Truth," shouted the dozens of people gathered outside a Chinese high school on Tuesday in a video widely circulated online. Holding white flowers, they demanded to know why a 17-year-old boy had suddenly fallen to his death on campus that weeke…
Read more

Meghan Markle told Oprah that ‘everyone has a basic...

Meghan Markle, Duchess of Sussex, told Oprah Winfrey that "everyone has a basic right to privacy" following news of several legal battles over her own privacy during her sit-down interview with Prince Harry
Read more

Get 1% cashback and a range of unique perks from AMEX’s new credit card.
Read more

What handcuffing a Black realtor tells us

Issac Bailey writes that had the Michigan incident happened in a place without the United States' racial history -- or present -- or the gulf of distrust between police and many of the Black residents they've sworn to protect, someone could dismiss it as just…
Read more

A Tuesday meeting on the topic is set to include the eight Democratic caucus members who opposed Sen. Bernie Sanders’ (I-Vt.) $15 hourly wage plan.
Read more

A firearms officer says he was desperate to get more help in to treat the Manchester attack victims.
Read more

Even some Trump hotels requiring masks as COVID spreads

The former president has shunned face coverings, but guests at several of his properties still need to wear them.
Read more

Kentucky Gov. Andy Beshear says there are lessons to be drawn from the COVID-19 pandemic
Read more

Germany's gymnasts wear full-body suits in women's qualification at the Olympics as they continue their stand against the sexualisation of their sport.
Read more

California's two largest school systems are facing legal challenges over their coronavirus vaccine mandates.The San Diego Unified School District, which serves over 121,000 students, is facing a lawsuit from the an...
Read more

Why China’s bitcoin miners are moving to Texas

The coronavirus pandemic could end in a year as the pace of vaccine production has increased global supply, according to Moderna CEO Stéphane Bancel.Bancel told the Swiss newspaper Neue Zuercher...
Read more

Real Madrid win 4-1 away at Granada to move within two points of city rivals Atletico with two games to go in La Liga.
Read more

Amazon's camera operation, Ring, announced Thursday that it is planning to make public any police requests for users' videos.Public safety agencies will have to use a new post category on Ring's...
Read more

"[Biden] just destroyed the image of America, of our great country, of our incredible warriors," Trump said.
Read more

Crime: Thieves, robbers and burglars to be fitted with...

Police will be able to cross-reference data with crime reports to see if offenders were in the area.
Read more

European shares fell on Wednesday as worries about rising inflation and the Delta variant of the coronavirus hit economically sensitive sectors, even as technology stocks tracked an overnight surge in U.S. tech stocks to record highs.
Read more

The U.S. Department of Education has announced it will open an investigation into Florida's ban on mask mandates for schools.
Read more

Reading striker Natasha Dowie says she had "a need to come back" to the Women's Super League.
Read more

Movement Health monitors the way you move using your phone's camera and puts together a fitness program.
Read more

The actress says a report about what she said on the Black Panther 2 set is "completely untrue".
Read more

West Ham to go all out in Lingard pursuit...

Chamise may not look (or smell) like much, but it's actually a kind of crystal ball for understanding how badly California might burn.
Read more

In an interview on "Tucker Carlson Tonight," Hungarian President Viktor Orban fired back at U.S. President Joe Biden for linking Orban with autocratic strongmen during the 2020 presidential campaign.
Read more

Six months after Art Acevedo resigned as Houston's police chief to take the top job at the Miami Police Department, his future with the agency is on thin ice after city commissioners called for his ouster during two contentious meetings.
Read more

Learn how to show that you like someone’s idea.
Read more

Alexander Zverev eased past Jannik Sinner 6-4 6-4 7-6(7) and into the quarter-finals of the U.S. Open on Monday as the fourth-seeded German extended his winning run to 15 matches.
Read more

A survivor deals with the trauma after her stepbrother is convicted of killing her family in order to go to the prom. CBS News chief investigative and senior national correspondent Jim Axelrod reports for "48 Hours."
Read more

It has been impossible to ignore the recent wave of ransomware attacks – but what can organizations do to address this rising risk?
Read more

World’s most expensive cities for expats in 2021 revealed

Hong Kong is no longer the world's priciest city for overseas workers, according to the results of Mercer's 2021 Cost of Living survey. Find out which city is the most expensive and why the results have been impacted by the pandemic and other factors.
Read more

A woman with a history of stowing away on airliners has been arrested for attempting to sneak onto a flight at Chicago’s O’Hare International Airport, auth
Read more

Lockdown easing: ‘There is no perfect time’

There are now no limits on how many people can meet or attend events across the country.
Read more

After Thursday night's Republican debate at University of Miami, Major Garrett asked front-runner Donald Trump about how the debate could affect the campaigning for Tuesday's primaries.
Read more

From Hollywood blockbusters to Wong Kar-wai movies, neon signs have been an iconic representation of Hong Kong.
Read more

Pollster Frank Luntz: ‘I would bet on’ Trump being...

Veteran GOP pollster Frank Luntz says that former President Trump "could never win" the 2024 general election, but that he "would bet on" T...
Read more

The Latest: New Zealand vows to react fast if...

Sources tells CBS Los Angeles it may be the worst security breach at a U.S. airport in a decade.
Read more

Sen. Sherrod Brown (D-Ohio) on Wednesday expressed outrage at the killing of a teenage girl by police on Tuesday in Columbus."While the verdict was being read in the Derek Chauvin trial, Columbus police shot and ki...
Read more

A Fort Hood solider assigned to the 1st Cavalry Division was found dead behind his barracks over the weekend.
Read more

WhatsApp has become a hotbed for scams

Burrow returns for Bengals as Dolphins rally for win

Nine months after tearing both the ACL and MCL in his left knee, Bengals quarterback Joe Burrow took his first snaps Sunday against the Miami Dolphins, who rallied to win 29-26 in a wild preseason finale for both teams.
Read more

Christian Yelich hit a grand slam in the Milwaukee Brewers 9-8 loss to the Colorado Rockies on Wednesday.
Read more

England boss Gareth Southgate knows his side cannot become complacent as they look to maintain their 100% record in World Cup qualifying when they face Poland on Wednesday.
Read more

U.S.-China Talks in Alaska Get Off to Rough Start