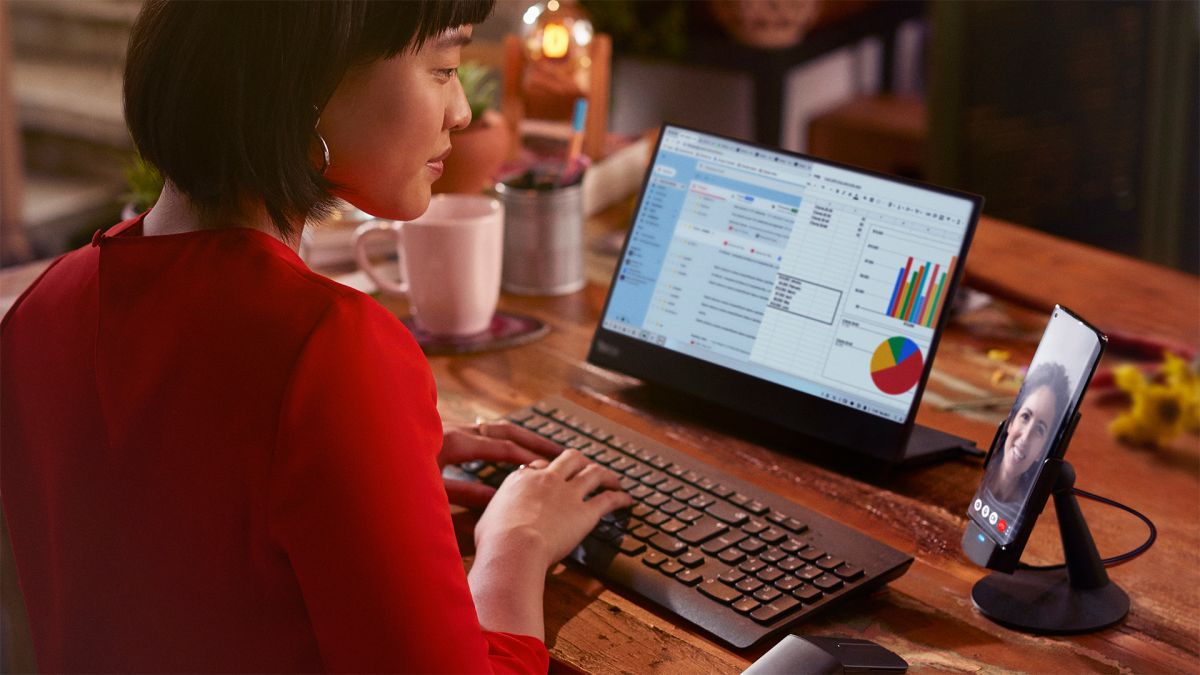 Taking inspiration from Samsung’s DeX and Huawei’s Easy Projection, Motorola has rolled out its own desktop-style interface for smartphones called Ready For, which is available now for US Verizon customers using the company’s flagship Motorola Edge Plus.

Motorola’s Ready For feature allows eligible users to connect their Motorola Edge Plus handset to an external monitor or television screen for use as a desktop-style computer or media center.

Ready For mode will launch immediately when a Motorola Edge Plus is connected to a larger display via USB-C cable or USB-C-to-HDMI adaptor (a dedicated Ready For dock is also planned for release). Users may then connect a Bluetooth mouse and keyboard to their handset to complete the desktop experience.

In addition to a desktop-style interface, Motorola’s Ready For mode takes full advantage of the Edge Plus’ impressive camera setup, meaning the handset’s 108MP main lens can be used for ultra-high resolution video conferences, along with its 16MP ultra-wide sensor.

Additionally, users can also pair a Bluetooth game controller to the Edge Plus, allowing for a console-like gaming experience when connected to a television. A built-in Media Launcher app also makes it easy to display the content on your phone on a larger screen.

At present, Motorola’s Ready For mode is dependant on your network’s rollout of the Android 11 update for Motorola Edge Plus handsets, which is why the feature is currently only available for Verizon customers in the US. That said, we imagine the update will be rolled out by more providers in the coming weeks. China reported 33 new coronavirus cases on the mainland for June 7, up from 19 cases a day earlier, the health authority said in a statement on Tuesday.
Read more

GOP opposition is hardening over a massive infrastructure plan and a revamp of policing laws, scrambling the prospects of two of President Joe Biden's top domestic priorities at a crucial juncture on Capitol Hill.
Read more

Prince Charles: ‘Young feel nothing is ever happening’ on...

Ahead of COP26, Prince Charles speaks to the BBC about his personal action and decades of campaigning.
Read more

Google is finally rolling out 4K streaming for YouTube TV with content from NBC, ESPN, FX, Discovery Networks and more – but it’s not a free upgrade.
Read more

Biden’s 2022 problem: Even some liberals are starting to...

When Congress is up for grabs, midterm elections historically are a referendum on a president's first two years in office.
Read more

The regulator shut down an alleged fraud by Joy and Brent Kovar, who raised more than $12 million from at least 277 investors.
Read more

Covid pandemic: Biden to order all US adults be...

The president is set to announce the move during a speech on Thursday evening.
Read more

Calmac says some passengers are ignoring advice to wear masks as Covid outbreaks on ferries cause disruption.
Read more

Biden world fears many vaccine skeptics may be unreachable....

A new effort to sell the jab is focusing on a few things: financial hurdles, conservative media and not speaking down to those who are hesitant.
Read more

U.S. Secretary of State Antony Blinken will travel to Berlin, Paris, Rome and the Vatican, as well as the Italian cities of Bari and Matera for a G20 summit, from June 22-29, the State Department said on Friday.
Read more

What will James Comey’s testimony to Congress reveal?

Former FBI Director James Comey is expected to appear before the Senate Intelligence Committee next month. Benjamin Wittes of Brookings Institution offers insights into the Russia investigation and the former FBI Director ahead of his testimony.
Read more

The White House on Thursday released its annual staff report to Congress, revealing the salaries of scores of West Wing employees.In an accompanying fact sheet, the White House said that a maj...
Read more

A day after it recorded the most new daily cases since the start of the pandemic, Florida on Sunday broke a previous record for current hospitalizations set more than a year ago before vaccines were available
Read more

Hogan lifting COVID-19 state of emergency in Maryland on...

It is the third time this week that the country has set a new record for positive tests.
Read more

U.S. officials and senior Taliban representatives met in Qatar over the weekend, and the State Department described the talks as "candid and professional." CBS News intelligence and national security reporter Olivia Gazis joins CBSN to discuss the issues at …
Read more

Mommy Time-Out and Other Ways To Deal With Stay-at-Home...

“We’re Momming Today” with Rosalind Wiseman, mom of two teen boys, co-founder of Cultures of Dignity, and parenting educator, about dealing with coronavirus anxieties in the household. What if your kids (and you) are having temper tantrums?  What if your chil…
Read more

Teen Becomes Fourth Person to Die From COVID in...

Where Are America’s Missing Workers?

Hello. Today we examine America’s missing workers, cost pressures from China, the rising value of U.S. stocks — and what happens if they drop.
Read more

Mohsin Hussain, 26, said he wanted to carry on his father's legacy.
Read more

Netflix’s top 10 most-watched movies ever are a weird...

Netflix has updated its list of the top 10 most-popular original movies on the service, and there are some strange choices.
Read more

And states consider copycat laws on the heels of the Texas abortion ban.
Read more

Ella Bruning is the only girl competing in the 2021 Little League World Series, and she became a part of history on Friday night.
Read more

Jennifer Lopez and Ben Affleck were seen out-and-about in Los Angeles with a few of their respective children.
Read more

US birth rate falls 4% to its lowest point...

The rate drops for mothers of every measured race and ethnicity, and in nearly every age group.
Read more

Crews worked overnight on Friday to tackle a fire at the former Hilden Mill site off Bridge Street.
Read more

The 60 Minutes correspondent said of his report, “It was among the most extraordinary things I'd experienced on a shoot.”
Read more

Jailed Kremlin critic Alexei Navalny is requesting that prison staff end their hourly nighttime checks on him, pushing back on authorities' argument that the opposition leader is a flight risk. ...
Read more

Cuba's embassy in Paris was attacked by gasoline bombs, according to Cuban Foreign Minister Bruno Rodriguez, who blamed U.S. government for "continuous campaigns against our country that encourage these behaviors an...
Read more

These 7 states are under air quality alerts as...

Seven western states are under air quality alerts due to raging wildfires, which have forced thousands to evacuate and destroyed hundreds of homes.
Read more

As ideological divisions wracked the Southern Baptist Convention this year ahead of a pivotal national meeting, one of the leading candidates for its presidency embraced a role as the man best equipped to build bridges
Read more

For President Joe Biden to reach his goal of cutting U.S. greenhouse gas emissions in half by 2030, big pollution reductions will have to come from someplace other than automotive tailpipes
Read more

Cesar Millan weighs in on Champ and Major’s behavior...

Cesar Millan says he feels for the Bidens' dogs Champ and Major after the German Shepherds were removed from the White House following a reported biting incident."It's a new environment. It's new people. And this p...
Read more

The Delta variant’s quick dominance over other COVID-19 strains in the U.K. is sparking concerns that the U.S. could be hit with a similar wave of new cases in the coming months.Public health experts are projecting that the highly transmissible...
Read more

Vizio’s M-Series Quantum Is Our Favorite TV for Under...

Next play: Brees joins NBC Sports after retiring from...

A panel under Iran's supreme leader's watch disqualified several of Raisi's moderate challengers ahead of the election.
Read more

Our Moto G10 Power review explains why it is a good option for anyone looking for good battery life and stock Android under Rs 10,000.
Read more

Laura Muir is into the 1500m semi-finals while Scotland's hopes of sailing medals have been thwarted - temporarily by calm conditions - as the Olympics rolls into its final week in Tokyo.
Read more

Fox News host Steve Hilton on Sunday claimed Anthony Fauci lied to Congress about the origins of the coronavirus and called for him to be prosecuted, part of a pattern of conservative attacks on the nation's top inf...
Read more

Protestors in France on Saturday continued to fight back against new measures that would require citizens to have COVID-19 passes to go to restaurants and others events.
Read more

Frustrations are building among congressional Democrats as the party's priorities pile up in the Senate.Legislation granting statehood to Washington, D.C., approved by the House on Thursday, is just the latest big...
Read more

Venice was able to avoid being placed on the United Nation's world heritage sites in danger list after it banned cruise ships from the area.The United Nations Educational, Scientific and Cultural...
Read more

The ex-health secretary says there is a risk of young people spreading coronavirus to older groups.
Read more

The Biden administration is poised to take action against Russian individuals and entities in retaliation for alleged misconduct including the SolarWinds hack and efforts to disrupt the U.S. election, according to people familiar with the matter.
Read more

U.S. Producer Prices Increased by More Than Forecast in...

Captain Manuela Furlan scores a hat-trick as Italy cruised to victory over Scotland in their Women's Six Nations clash in Glasgow.
Read more

The European Union’s top court has ruled that Germany “systematically and persistently” exceeded limits on nitrogen dioxide, a harmful gas produced by diesel engines, in many regions between 2010 and 2016
Read more

The former Olympic gymnast settled with USA Gymnastics in December of 2016 for $1.25 million to resolve claims that she was sexually abused by Nassar for seven years.
Read more

AIDEA had hoped to move forward with fieldwork for seismic data acquisition, a key step in determining the area’s oil and gas resource potential.
Read more

Centralizing power is something dictators do, and we will fight tooth and nail against any power grab that attempts to change our government in such a militant manner.
Read more

The party describes Holyrood as a glorified local authority that should be abolished to save money.
Read more

Video shows the moment a twin-engine Cessna fell from the sky and burst into flames in a residential neighborhood near San Diego.
Read more

Bally Sports North looks around for the top tweets and Instagram posts from the past week.
Read more

Selfridges has created a wedding suite on the fourth floor of its London department store.
Read more

Obama dispenses with suspense for SOTU

For the last two weeks, President Obama has been detailing what he intends to announce in his upcoming State of the Union address. Major Garrett reports on what the president has planned and how the GOP is responding.
Read more

States making up the SEC have low vaccination rates,...

College football kicks off this weekend with stadiums filled with thousands of excited fans, but there's been no coordinated effort on how to handle fans as the Covid-19 Delta variant continues to spread.
Read more