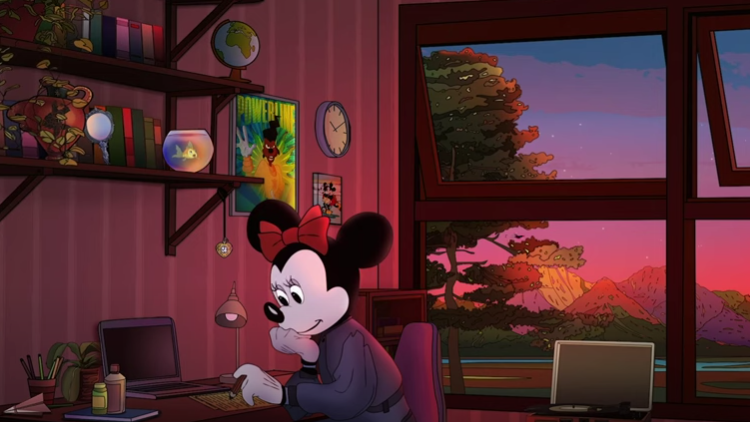 Minnie Mouse has released a lofi hip hop album – and it’s an absolute bop. Yes, you read that correctly.

Walt Disney Records has launched a new album of classic Disney songs reimagined in a chill-out beats style, in a bid to appeal to the legions of lofi music fans that use the genre to study, work, and relax.

Lofi Minnie: Focus is heavily influenced by the ever-popular Lofi Girl YouTube channel, which livestreams a playlist of chilled out hip hop beats accompanied by a video of an animated girl studying in her cozy-looking room.

You can get a similar thing from the Disney Music Vevo channel on YouTube, with Minnie relaxing in her room to the reimagined hits (fans of 1995’s A Goofy Movie will immediately notice the large Powerline poster hanging on the wall). The album is also available to play on all the major music streaming services, including Spotify, Apple Music, Deezer, and Tidal.

Using a selection of Minnie Mouse’s favorite songs (that’s everything from The Lion King’s Hakuna Matata to The Little Mermaid’s Under the Sea), the reworked songs sound as nostalgic and familiar as we’d hope – and it works wonderfully for the genre.

Lofi is a genre of music with hip hop, house, and jazz influences, and it’s designed to match the human heart rate with tempos of 70-90 beats per minute – it has a similar vibe to elevator music, with relaxing beats, simple melodies, and nostalgic pops and cracks to evoke the warm sound of a record player or cassette tape. Popularity exploded during the Covid-19 pandemic, reaching Internet meme status as people sought out music to help them unwind and concentrate from their bedrooms.

That nostalgic feel is one of the cornerstones of lofi music, and there’s a veritable rabbit hole of microgenres to get lost in (usually ending in the -wave suffix). Delve into a lofi playlist, and you’ll soon find yourself dipping into vaporwave, which takes influence from 80s and 90s lounge music, consumer capitalism, and glitchy early web design. Dig a little deeper, and you might discover Simpsonwave, a YouTube phenomenon that takes almost hallucinatory soundbites from early Simpsons episodes and lays them over chopped and screwed beats.

Disney, therefore, is the perfect candidate for a lofi makeover, and while the music doesn’t veer too far into the darker, trippier side of the genre, tracks like Hercules’ Go The Distance are transformed by swapping out the Broadway-style vocal for soft keys, synths, and tinny electronic drums.

The standout track from Disney’s Encanto is nowhere to be found on the Lofi Minnie album. (Image credit: Disney/Pixar)

While the tracklisting spans the last 30 years of Disney movies, we were surprised to find that We Don’t Talk About Bruno from Encanto was missing. It’s the first Disney song to reach number one in the charts since Aladdin’s A Whole New World, and the tune has become something of a viral sensation following the film’s release in late 2021.

Perhaps the album makers felt the snappy salsa beats wouldn’t translate well enough into the lofi genre, but it does seem like a missed opportunity.

We’d also like to have seen some songs from Disney’s Golden Age reworked into lofi beats. Sure, lofi music generally takes inspiration from the music of the 80s, 90s, and early noughties, but can you imagine a warbling Snow White vocal laid over some distorted beats and shimmering synths?

If that sounds up your street, you should definitely check out Australian musician Pogo’s YouTube channel. His electronic remixes take stems from Alice In Wonderland, Up, The Little Mermaid, and more. They’re a dream to listen to – and they prove that music makers have been taking inspiration from the Disney catalog long before Minnie jumped on the trend. Ghislaine Maxwell to be sentenced for sex trafficking minor...

Irish beat Bristol to move clear of bottom side

Biden claims a win with the Inflation Reduction Act

How much should you pay for pet insurance?

US Dollar Dominance Stealthily Eroded by Other Currencies Like...

You can now text Michelle Obama. Here’s what happens...

Banxico’s Esquivel Has Fair Chance of Keeping His Central...

Twitter seems to be working on end-to-end encryption for...

BIDEN: UP TO PEOPLE TO DECIDE…

U.S. to double and accelerate order of Pfizer antiviral...

Apple Could Reinvent Money Management, Take on PayPal and...

Breonna Taylor’s mom storms out of courtroom after ex-cop’s...

ChatGPT Is an OK Law Student. Can It Be...

Opinion: 5 things you need to know about Biden’s...

Hundreds of Russian Orthodox clergy urge to ‘stop the...

Citi is ordering its low-performing remote workers back to...

Should you still buy a gaming headset in 2022?

Ireland Baldwin opens up about rape, having two abortions:...