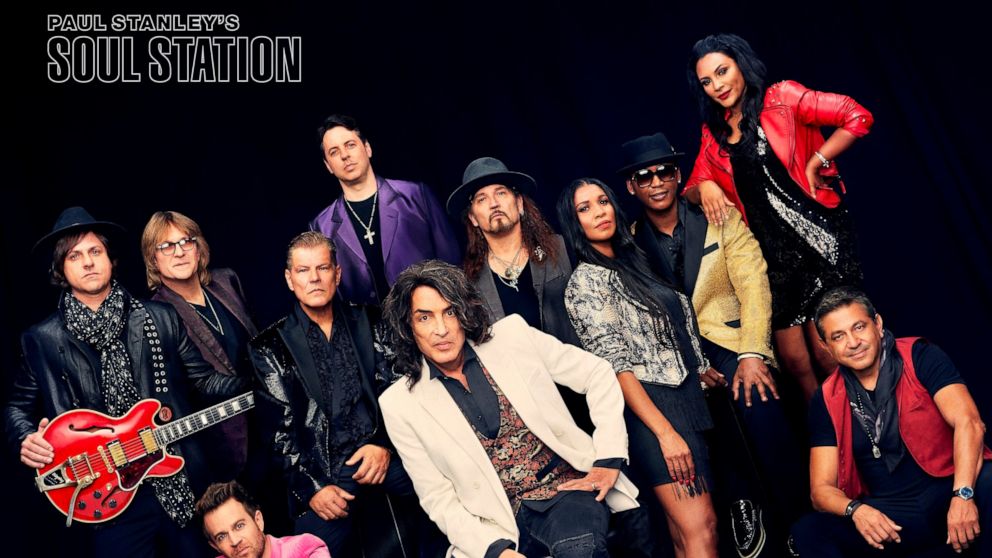 The love guns have all been unloaded and securely holstered, and Detroit is soul city, not rock city this time out as Paul Stanley, ringleader of the four-ring circus known as Kiss, pays homage to classic soul on a new solo album.

The starry-eyed singer and guitarist covers some of the greatest soul songs ever written, and writes five new tracks very much in that spirit.

It may surprise, if not shock, many Kiss fans. But then, they embraced Peter Criss’s orchestral ballad Beth, and didn’t mind (much) when Gene Simmons covered the Disney classic When You Wish Upon a Star.”

Theres no arena rock to be found here. Crooning and falsetto abounds on The Spinners Could It Be I’m Falling In Love;” The Temptations’ Just My Imagination; and Smokey Robinson’s The Tracks of My Tears. He even retains the electric sitar on You Are Everything by The Stylistics.

And not since Barack Obama crooned a few bars of it has there been a more unexpected cover of Al Green’s Let’s Stay Together.

Some of Stanley’s originals are quite good as well, and would have had a decent chance of being AM radio hits in the ’70s, including Save Me and Whenever You’re Ready.

Current Kiss drummer Eric Singer is part of the 11-member band of top-notch musicians and singers Stanley has assembled.

Armed, pro-Russian separatists have appointed their own mayor, a former soldier in the Soviet army who denied Russian operatives helped seize the town. Ukraine's government says it has identified many of the militants as Russian agents. Holly Williams reports.
Read more

HHS unveils office to treat climate change as a...

“The climate crisis is here, and the Department of Health and Human Services is rising to meet the challenge,” HHS Secretary Xavier Becerra said.
Read more

Amtrak seeks $75B in federal funds to expand rail...

Japanese students sent a message in a bottle. 37...

A glass bottle containing a message from 1984 has washed up in Hawaii and been discovered by a 9-year-old girl -- 37 years after high school students in Japan dropped it into the ocean as part of an experiment.
Read more

Prizes and giveaways appear to offer diminishing returns as the number of persuadable adults gets smaller.
Read more

Four of the victims were members of Indianapolis’ Sikh community.
Read more

Coronavirus-related deaths worldwide passed a grim milestone of 4 million on Thursday, according to a Reuters tally, as many countries struggle to procure enough vaccines to inoculate their populations.
Read more

It has already taken 17 years, four American presidents and tariffs on $11.5 billion worth of transatlantic trade for the U.S. and the European Union to reach a ceasefire in their bitter feud over aircraft subsidies.
Read more

Plenty of power and a collapsible design makes the Furo X e-bike suitable for a variety of cycling needs.
Read more

Windows 11 SE could take cues from the worst...

Microsoft may be sticking with an S mode experience for Windows 11, the rumor mill reckons.
Read more

Community rallies behind 7-year-old in need of heart transplant

The 7-year-old from Johnston, South Carolina, didn't just receive an outpouring of support from his local community. Within days, donations all around the country started to roll in to make sure he would be in line for a new heart when there was a match waiti…
Read more

Listen To The Full Interview Below: Chris Wallace, Anchor of Fox News Sunday joined Fox News Radio’s Guy Benson Show to discuss his new book Countdown Bin Laden The Untold Story of the 247 Day Hunt to Bring the Mastermind of 9/11 to Justice. Wallace had this …
Read more

The Epson EH-TW9400 is a superb home cinema projector that delivers a winning combination of performance and high-end specs.
Read more

No, Google isn’t changing the way your Fitbit charges

An early render of the Fitbit Luxe suggested it would charge via USB-C, but the company says that's not the case.
Read more

Jio has partnered with video game producer Sega and its classic games like Sonic Hedgehog 2 and Streets of Rage 3 are set to come to JioGames on Android devices and Jio TV.
Read more

Polish bank PKO BP (PKO.WA) wants to return to regular dividend payments and will stick to its plan to offer Swiss-franc mortgage holders settlements, its new chief executive told the Parkiet daily in an interview published on Monday.
Read more

The Welsh government says live performances can return "across all settings".
Read more

The prospects for President Joe Biden’s economic agenda could be enhanced by a ruling from the Senate parliamentarian that opens the door to passing multiple additional bills this year without any Republican support.
Read more

Surfside collapsed condo site gets bid of up to...

A private bidder has put in an offer of up to $120 million for the plot of land where the collapsed Champlain Towers South condominium building stood in Surfside, Fla....
Read more

Winter viruses are flourishing as more people mix, and a doctor's chief says A&Es are struggling to cope.
Read more

Newsom: Recall effort ‘appears to have the requisite signatures’

California Gov. Gavin Newsom (D) on Tuesday recognized that the recall effort aimed at ousting him from office will likely have enough signatures to spark a special election this year.
Read more

The U.S. Supreme Court will hear oral arguments Monday in a case that will determine who is eligible for more than $530 million in federal virus relief funding set aside for tribes last year
Read more

SSD prices could rise thanks to new cryptocurrency Chia

If you’re mulling an SSD purchase, it might be wise to buy soon
Read more

Caitlyn Jenner denies reports campaign has been paused amid...

His art is worth millions but George Condo is...

More than four decades into one of American art's most enduring and successful careers, George Condo is reinventing himself.
Read more

As many as 150 people are reportedly injured, with the worst-hit areas looking like a war zone.
Read more

The "problem that has no name" comes from the national, not the female, character. The post Feminism and American Restlessness appeared first on The American Conservative.
Read more

Biden may get an earful from G-7 allies over...

Long suspected of murder, she confessed but avoided prison

The desperate messages sent by Afghan politician Shukria Barakzai to a UK MP. as the Taliban tried to hunt her down.
Read more

New York Times columnist Maureen Dowd’s comparisons of former President Barack Obama to "The Great Gatsby" and Marie Antoinette were apparently too extreme for many liberal fans of the ex-commander-in-chief on Twitter this weekend.
Read more

Two asylum seekers and their children had been detained on Christmas Island for the past two years.
Read more

Lancashire are in command against Somerset after bowling them out for 90 and then taking further late wickets.
Read more

Iran’s New President Has a Track Record of Antisemitism...

The devastation wrought by dictators from Hitler to Stalin to Khomeini brandishing The Protocols should compel all of us to take seriously the threat represented by an Iranian regime bent on acquiring nuclear weapons and sponsoring terrorism across the region.
Read more

The justices ruled 6-3 that defendants convicted by split juries and whose appeals have been fully exhausted don't automatically get to challenge their trials.
Read more

When a robber demands cash, a bank teller can stick a dye pack into the bag of stolen money so that it bursts shortly afterwards.
Read more

Microsoft Teams update will prevent you getting crushed by...

Microsoft is giving users greater control over how and when they receive Teams notifications.
Read more

Why is Bill Gates Buying So Much Land?

The billionaire philanthropist has been quietly buying up farmland all over the country. Should we be concerned? The post Why is Bill Gates Buying So Much Land? appeared first on The American Conservative.
Read more

Yui Inoue has been charged with two counts of first-degree murder after officers found her children's bodies at Arizona apartment.
Read more

What are the Delta variant symptoms?

The Delta variant of Covid-19, first identified in India, has changed how the virus is spreading.
Read more

Angel Cabrera, a former professional golfer who won the Masters and the U.S. Open, was sentenced to two years in prison Wednesday on assault charges against his former partner.
Read more

Redcar rescue: Man in his 80s rescued after falling...

The RNLI says a team found the man clinging to a mooring chain after hearing "a weak cry for help".
Read more

BBC football expert Pat Nevin examines the reasons why Premier League teams have struggled at home since matches went behind closed doors due to the Covid 19 pandemic.
Read more

Dawid Malan is brilliantly caught and bowled by Pakistan's Shaheen Afridi as England begin their chase of 233 against Pakistan in the first Twenty20 at Trent Bridge.
Read more

Captain Andy Robertson has urged Scotland to make sure their battling goalless draw with England is not a "pointless result" as they bid to make history at Euro 2020.
Read more

The dating app will detect abusive messages before they are sent and ask the writer to pause.
Read more

Rick Bowness: ‘The issue is getting that puck in...

Rick Bowness: 'The issue is getting that puck in the net'
Read more

Like Prithviraj's previous release, Kuruthi too is a straight-on-the-OTT release. As a matter of fact, it seems the Malayalam movie industry seems to have made peace itself with OTT releases better than other language movie industries whose stars still seem m…
Read more

The International Brotherhood of Teamsters will vote Thursday on a resolution recognizing unionizing Amazon as one of the organization's top priorities.As part of an initiative called "The Amazon Project," the Team...
Read more

Dolphins’ Tua Tagovailoa carted off the field with rib...

Miami Dolphins quarterback Tua Tagovailoa was carted off the field in the first quarter of Sunday's game against the Buffalo Bills and is questionable to return.
Read more

Ana Uglow, 17, was on a trip to New York and Washington DC when she fell ill with sepsis.
Read more

Londoners are cleaning up after torrential rain left homes, roads and several subway stations flooded, the second unseasonal inundation in as many weeks
Read more

Not a single Republican in the House or Senate voted for the $1.9 trillion COVID-19 relief package now awaiting President Biden's signature, marking the first measure to address the pandemic that made its way through Cong...
Read more

The World Trade Organization has urged member states to start negotiations in earnest on proposals to temporarily waive international patent protections for coronavirus vaccines. We hear from its Director-General, Ngozi Okonjo-Iweala. Also on the programme:…
Read more

Biden on track to pass 100 million vaccinations, with time to spare

Is the Tax Code Racist?