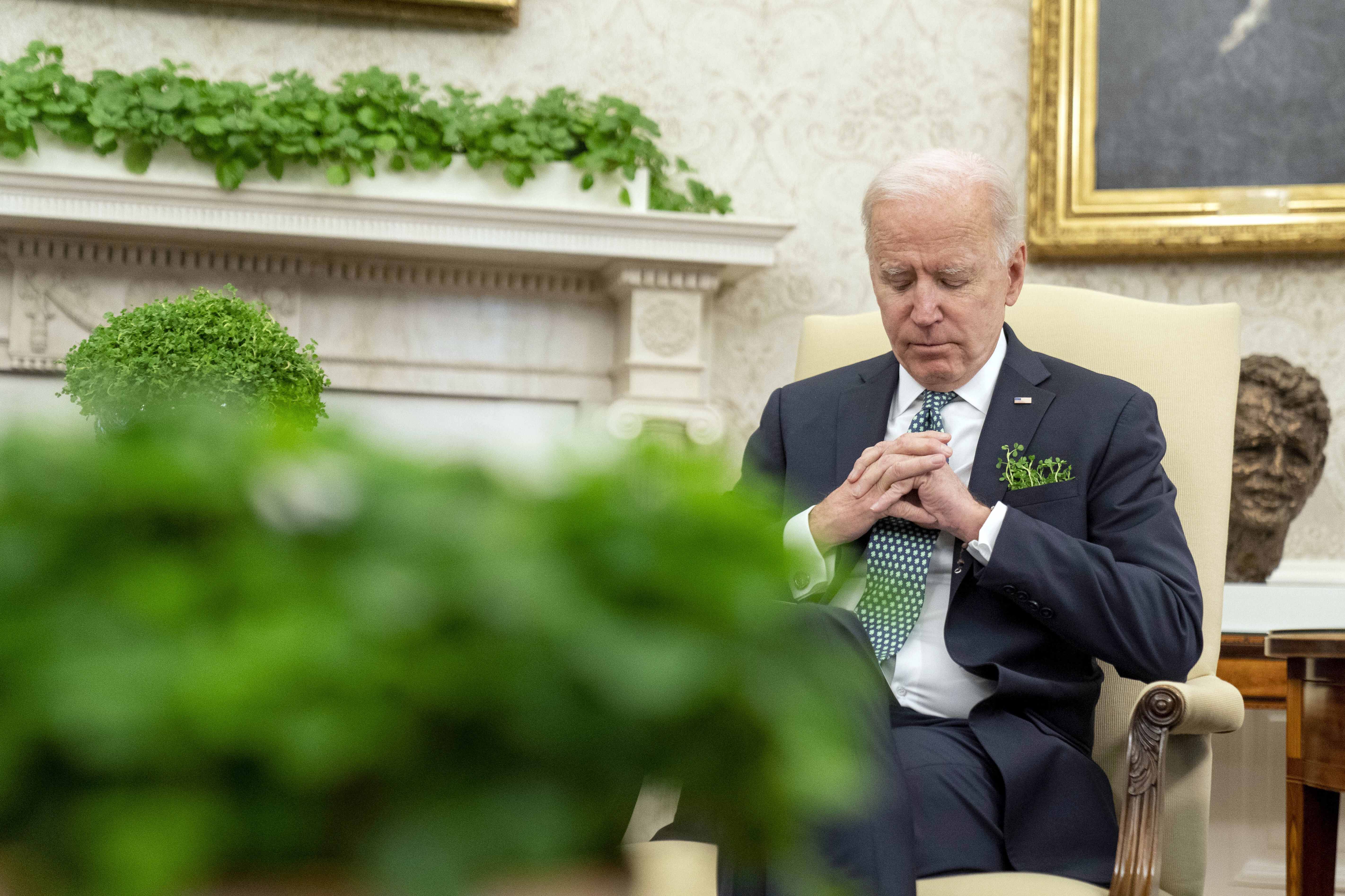 On Thursday, Biden also ordered that American flags be flown at half-staff on federal grounds to honor those killed in the three attacks on Atlanta-area spas. Eight people died in the attacks, among them seven women and six women of Asian descent.

Georgia law enforcement officials have received widespread criticism after suggesting the suspect, a white man, may not have been “racially motivated” in the killings. Capt. Jay Baker of the Cherokee County, Ga., sheriffs office said the suspect claimed to suffer from a sex addiction and saw the spas as a “temptation … to eliminate.”

Biden said Wednesday that the the question of motivation is still to be determined but called said the attacks were troublesome.

Whatever the motivation here, I know that Asian Americans are very concerned because, as you know, Ive been speaking about the brutality against Asian Americans for the last couple months, and I think its very, very troublesome, Biden said.

Biden has rolled out an aggressive strategy to sell his relief plan over the pas week, traveling himself and sending other administration emissaries to battleground states to broadcast to the plans benefits. Inside the Waldorf Astoria’s $1 billion makeover

The luxury hotel in Manhattan is 90 years old this month, and it is currently undergoing a years-long renovation that will include opulent private residences.
Read more

Analysis: Why neither party has a sustainable political majority

Let me tell you a little story. Nine years ago, Barack Obama won a second term in office, and there was talk of an emerging Democratic majority in presidential elections. Then came Donald Trump, the least liked major party nominee of all time, who won the 201…
Read more

Sen. John Kennedy (R-La.) has announced his reelection campaign for the Senate and received former President Trump's endorsement for it.
Read more

Businesses jumping into vaccination effort see it as win-win

Businesses are getting more involved with the fight against the coronavirus by offering incentives for people to get vaccinated in a move they see as helping both public health and their bottom line.The promotions range from on-site vaccinations to...
Read more

The United States Air Force is sending more than two dozen F-22 stealth fighters to an exercise in the western Pacific this month, an unusually large deployment of the powerful jets that analysts say sends a strong message to a possible adversary in China.
Read more

AP PHOTOS: In Sri Lanka, a dangerous climb for...

Getting online school lessons for residents of this remote Sri Lankan village requires a trek through dense bushes sometimes visited by leopards and elephants. The teachers and some 45 schoolchildren in Bohitiwaya then climb more than 3 kilometers (2 miles) …
Read more

The number of Americans applying for unemployment benefits dropped last week, a sign that layoffs declined and the job market is improving
Read more

Chanting, "USA! USA!" hundreds gathered at the Oklahoma Statehouse in Oklahoma City on Saturday to protest coronavirus mask and vaccine mandates and fight for their "freedom" to make their own choice.
Read more

Brighton & Hove City Council says it may bring in a third party to help resolve the dispute.
Read more

Twitter says it is now more selective in verifying...

Twitter is going back to the drawing board once again to ensure that the coveted blue tick program doesn't have loopholes.
Read more

Inspector who missed major crack in I-40 bridge twice...

Span linking Arkansas and Tennessee was closed for emergency repairs when the track was finally discovered last week.
Read more

The pop star posts a 21-second clip of a black-and-white video for a song called Easy On Me.
Read more

Judge to re-sentence Scott Peterson in December to life...

A California judge says Wednesday that she plans to resentence Scott Peterson to life in prison Dec. 8 while she separately considers whether he deserves a new trial in the 2002 murders of his pregnant wife and unborn son
Read more

Bloomberg Westminster: You Can’t Have it Both Ways On...

DeSantis knocks Fried one day after campaign launch: ‘She...

Buttigieg walks back claim that infrastructure plan will create...

The number should have been 2.7 million, he acknowledged.
Read more

Families of the victims of the catastrophe react angrily after the investigating judge is taken off.
Read more

Samsung’s New Galaxy A52 5G Is a Reliable Droid

The new $500 handset does everything a phone needs to do, though it's plagued by the same flaws as its predecessor.
Read more

Midfielder Danielle van de Donk joins French side Lyon after reaching the end of her contract with Arsenal.
Read more

Austin's public health department said the region is experiencing the lowest staffed ICU bed capacity since the beginning of the pandemic.
Read more

What is Putin looking for from summit with Biden?

The summit between President Biden and Vladimir Putin is the Russian leader's fifth meeting with a U.S. commander in chief. Cyberattacks, election meddling and the imprisonment of Americans in Russia are all on the agenda. CBS News senior foreign corresponden…
Read more

Senate Democrats on Monday unveiled a $3.5 trillion budget resolution they aim to pass without Republican support, paving the way for boosting spending in a number of key areas in line with the president’s legislative agenda through a process called...
Read more

Watch highlights as West Ham put five goals past Reading to lift themselves off the bottom spot in the Women's Super League.
Read more

Duncan Scott claims his third title and second British record of the week with victory in the 200m freestyle at the British Olympic trials in London.
Read more

The House on Wednesday unanimously passed legislation intended to help strengthen K-12 institutions against cyber threats, which have ticked up as classes have moved online during the COVID-19 pandemic. The K-12 Cybersecurity Act would require...
Read more

Netflix Staff Raised Concerns About Chappelle Special Before Its...

The company is dealing with an internal outcry unprecedented in its history.
Read more

Yorkshire spinner Dom Bess bowls a career-best 7-43 yet they struggle to build their lead on day two against Northamptonshire.
Read more

Down / Up for something

If there is something you are interested in doing now, we have an expression for you.
Read more

The Australian state of New South Wales recorded its biggest daily rise in Covid-19 infections this year, even as residents in several major cities across the country were released from snap lockdowns on Saturday.
Read more

Firefighters are scrambling to control an inferno in southeastern Oregon that's spreading miles a day in windy conditions as wildfires across the U.S. West strain resources
Read more

Asian Americans experienced the biggest rise in severe online hate and harassment in the past year in comparison to other groups, a new survey released by the Anti-Defama...
Read more

Who Is American Exceptionalism For?

The international establishment believe America should treat other states better than its own citizens. The post Who Is American Exceptionalism For? appeared first on The American Conservative.
Read more

The company responsible apologized and stressed that there's no danger to recipients.
Read more

The Democratic Senatorial Campaign Committee (DSCC) is tapping Sen. Jon Ossoff (D-Ga.) to chair its Blue Green Council, which will work to build support in the energy and clean tech sector for Senate candidates.The...
Read more

How start-up culture is changing the world

Author Brad Stone sits down with Gayle King to talk about Silicon Valley's impact on society and culture. Stone's latest book "The Upstarts: How Uber, Airbnb, and the Killer Companies of the New Silicon Valley Are Changing the World" dives deep into the impac…
Read more

It's the biggest increase in almost 40 years, and it comes as inflation is eating away at seniors' buying power.
Read more

County Championship: Essex bounce back with innings victory against...

Anyone involved in helping a person get an abortion in Texas after a heartbeat is detected could be charged with aiding and abetting under SB 8.
Read more

Managing the monitoring, resilience and complexity of a large IT environment can be a real challenge. Centralized monitoring can help to achieve this.
Read more

NKorea warns US of ‘very grave situation’ over Biden...

Blinken says US will lead world in beating pandemic

Secretary of State Antony Blinken on Monday announced the appointment of a U.S. coordinator for global COVID response and health security while committing the Biden administration to leading the worldwide effort to beat b...
Read more

As bombs rain down on Myanmar’s hotbeds of rural...

In a remote part of Myanmar's far west, where narrow roads zigzag through treacherous mountain passes and villages nestle on precipitous slopes and ridges, lives a centuries-old community of hunters.
Read more

Senate Majority Leader Charles Schumer (D-N.Y.) sparked anger among Senate Republicans after he railed against them just after they helped advance a short-term debt ceiling extension over a key hurdle....
Read more

If the Starliner's valve woes are not quickly resolved, the flight could face a lengthy delay.
Read more

Bank of America Corp. is confident in its ability to retain young talent as Wall Street firms bid up salaries for junior bankers burned out by the pandemic, Chief Executive Officer Brian Moynihan said.
Read more

Gaza: no ceasefire yet

The Israeli Prime Minister says his country won't stop bombing Hamas targets in Gaza, as more rockets are fired into Israel. So when will diplomacy kick in? We hear from the Egyptian and the Israeli ambassadors in London. Also in the programme: the cost of …
Read more

Apple's new iPad mini is capable of connecting to 5G networks, but it doesn't work with mmWave 5G.
Read more

Worcestershire end day two on 152-2 with Daryl Mitchell on 83 as they make a sound response to Warwickshire's 395 all out.
Read more

Haiti prosecutor replaced after calling for PM to be...

A Haitian prosector was removed from his position after asking for current Prime Minister Ariel Henry to be charged in the assassination of President Jovenel Moïse,...
Read more

Infrastructure bill would add $256 billion to deficit over...

The agency released its analysis on the bipartisan infrastructure bill as the Senate continues considering amendments.
Read more

An effort to recall Los Angeles County District Attorney George Gascón appears to be gaining some momentum with at least 17 cities in the county issuing "no confidence" votes over his progressive criminal justice policies, according to a report.
Read more

Watch LA Dodgers Mookie Betts' spectacular diving catch on Tommy Pham's line drive for the final out of the game which sealed the Dodgers' 2-0 win against the San Diego Padres.
Read more

It went from bad to worse for the Kansas City Chiefs on Monday.
Read more

Who Was Helena Modrzejewska? Today’s Google Doodle Celebrates the...

The prolific actress known for her Shakespearean roles was a theater star in America for nearly 30 years.
Read more