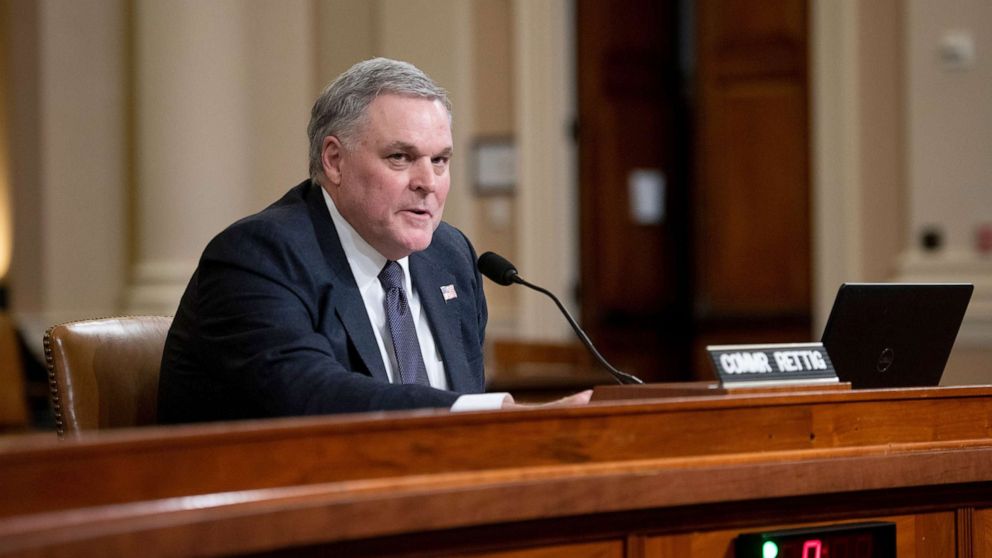 IRS Commissioner Charles Rettig on Thursday said the millions of Americans whose tax returns have been caught in a processing backlog created by the pandemic, which shut down the IRS for a time, should see their refunds in the coming months.

“We would hope to be through this backlog by the summer,” Rettig told House Ways and Means Oversight Subcommittee Chairman Bill Pascrell, who said some 12 million returns are trapped in the IRS logjam, although Rettig says just 2.4 million were returns of individual Americans.

“I will tell you, my employees will work as hard as we can possibly work,” Rettig promised lawmakers, noting that he “sent 80,000 employees home. I shut down 511 facilities in less than two weeks,” because of pandemic concerns.

And while members praised the agency head for extending the April 15 tax filing deadline by a month to May 17, Rettig was reminded repeatedly by lawmakers that the refunds are a lifeline for some Americans devastated by the pandemics economic toll.

“You know the 14-hundred dollars that theyre going be getting from the previous stimulus check payments – that was a big deal. But the backlog that weve seen in the 2019 returns was extremely concerning, and thats because they really depend on that money, Rep. Jimmy Gomez, D-Calif., told the IRS chief.

Rettig, first nominated by President Donald Trump in 2018 and currently serving a five-year term, implored Americans eligible to receive those $1,400 stimulus checks to send in their taxes.

But Americans who may have already filed their returns this year and make under $150,000 in unemployment insurance compensation through August, thereby qualifying them for the $10,200 tax-free income benefit — part of the recently passed $1.9 trillion COVID relief law — do not need to file an amended return, the commissioner said.

A number of members raised concerns that low-income families, while audited at a far higher rate by the agency, do not tend to take advantage of benefits from COVID-19 relief legislation, many asking how that can be remedied.

Rep. Dwight Evans, D-Pa., asked how the IRS plans to reach poorer American families who have “the greatest need for relief” to inform the of the American Recovery Plan Acts up to $3,600 per child tax credit.

Rettig cited low-income tax clinics and other pro-bono work available locally, and again repeated, “These people need to file a tax return. And I get it, you know the normal apprehension. I don’t have income – why do I have to file a return? Unfortunately – the statute triggers off of the filing of a return. So we need to get folks to actually file the returns, and there’s a lot of assistance we can work with.”

“So, basically – with the (child tax credit) and the earned income tax credit, theres an awful lot of money being left on the table, potentially?” Evans asked.

“Its not just money. Its survival. Its childcare. Its elder care,” Rettig replied. Another person has been charged in a shooting outside a bar in Lake Ozark, Mo., that left one man dead and four others wounded.
Read more

Premier League: How to follow your team on the...

The BBC's coverage of your Premier League club is bigger and better than ever before. Here's everything you need to know to make sure you never miss a moment.
Read more

More than 20% of women admitted to intensive care for Covid since May were pregnant, a study finds.
Read more

Meth production surged in Asia as economy faltered due...

Asia's drug cartels adapted quickly to the pandemic in 2020, flooding markets with synthetic narcotics worth tens of billions of dollars even as the global economy ground to a halt, according to a new United Nations report.
Read more

Shelley-Ann Fraser-Pryce will compete in the Olympic 100m and 200m after storming the Jamaican trials.
Read more

The Trump Organization on Monday sued the city of New York after it ended its contract for a golf course at Ferry Point Park in the wake of the attack on the US Capitol on January 6.
Read more

Some 460 anti-Semitic incidents were reported to the Community Security Trust from 8 May to 7 June.
Read more

Oregon’s State Senate on Saturday passed a bill that would make illegal immigrants in the state eligible for Medicaid-funded medical services -- sending the legislation to Democratic Gov. Kate Brown for signature.
Read more

Democrats are opening the door to revamping a sweeping election reform bill, considered a top priority for the party's base, as they try to shore up support within their own ranks.Democrats have vowed to hold a vot...
Read more

Waterfalls Cascade on Uluru After Rain

A Glimpse Into the Crypto ETF Future

London Film Festival welcomes audiences back to the movies

Movies from 77 countries will screen at the 2021 London Film Festival, as Britain’s leading cinema showcase welcomes mass audiences back to movie theaters after a pandemic-disrupted year
Read more

The funeral of Prince Philip is taking place in Windsor, attended by the Queen and other senior royals.
Read more

Black and Latinx arts community still left behind after...

America’s arts and culture sector is one of our shining achievements, and that’s a direct result of diverse experiences and perspectives. American arts and culture would not exist as it is today without the influence and contributions of Black and brown artis…
Read more

Family members share favorite memories of Lizzi and what she loved to do - studying marine biology. In her memory, they have created a scholarship fund in her honor. Learn more
Read more

Renault Is Charged in France With Deceit Related to...

French investigators have charged Renault SA with cheating on emissions in ongoing fallout from the diesel scandal that erupted starting with Germany’s Volkswagen AG.
Read more

An Illinois mother was fatally injured by a stray bullet Sunday night while she was preparing her 7-month-old daughter for bed and reading the baby the Bible.
Read more

South Korean electronics maker LG says it is getting out of its loss-making mobile phone business to focus on electric vehicle components, robotics, artificial intelligence and other products and services
Read more

Voters in Virginia head to the polls next week to decide which Democratic candidate will win the party's nomination in the state's gubernatorial race. CBS News political associate producer Aaron Navarro has been covering the race. He spoke with Anne-Marie Gre…
Read more

Sick of weeds and trash piles, Rome to elect...

After five years in office as Rome’s first populist mayor, Virginia Raggi is running for a second term in the city’s election Sunday and Monday
Read more

Gov. Kathy Hochul, D-N.Y., claimed from a pulpit in Brooklyn on Sunday that citizens should be thankful to God for the COVID-19 vaccines, which she claimed were divinely inspired
Read more

Afghanistan: US commander warns of possible civil war after...

Apple is already facing issues with the iPhone 7

Senate Majority Leader Charles Schumer (D-N.Y.) said on Tuesday that a group of senators working on legislation to end the federal prohibition on marijuana are aiming to have draft legislation "in the near future."...
Read more

A backlash against reports of forced labor and other abuses toward a largely Muslim ethnic group in Xinjiang is taking a toll on China’s cotton industry, but it’s unclear if the pressure will compel the government or companies to change their ways
Read more

Gottlieb calls for “broader view” in assessment of coronavirus...

"We need to have a broader view about the potential risk that this was a lab leak," Gottlieb said Sunday on "Face the Nation."
Read more

Officials have portrayed the program as an alternative to the often dangerous trek migrant children take to reach the U.S. southern border.
Read more

Ammon Bundy, who was to go on trial after being charged with trespassing in the Idaho Statehouse last year, was arrested Monday after he refused to wear a mask in court.
Read more

Man dies after 43 hospitals turned him away in...

Ray DeMonia died in a Mississippi hospital three days before his birthday — about 200 miles away from home.
Read more

A truck filled with 2,000kg of fireworks goes up in flames, injuring at least 17 people in Los Angeles.
Read more

Climate academics from some of the regions worst hit by warming are struggling to be published.
Read more

A new leak has shown off the long rumored rose gold iPhone 13 Pro, but we're not sure it's real.
Read more

Mobile phone networks say they have been told to block access to the social media site.
Read more

Michele Bachmann warns of the dangers of Biden’s door-to-door...

Former Minnesota Congresswoman Michele Bachmann told "Watters’ World" Saturday that the federal government wants Americans to "check our Bill of Rights" at the door when it comes to COVID vaccines.
Read more

North Korea said its latest rocket launch was a successful test of a “hypersonic missile.” It comes as Pyongyang's UN ambassador spoke at the UN General Assembly, and after Kim Jong Un's sister Kim Yo Jong reached out to South Korea (Source: Quicktake)
Read more

"When I arrived and saw this situation it actually sent a shiver down my spine," snake catcher Stuart McKenzie said.
Read more

Microsoft Teams is getting this vital security tool at...

The iconic British supermodel has a good eye for old clunkers—and she doesn’t just let them sit in the garage.
Read more

Police say the mainly Haitian migrants were left by people smugglers paid to take them to the US.
Read more

Officials from Google, Amazon, Apple, Microsoft, IBM and ADP will be at the White House on Wednesday, according to a senior Biden administration official.
Read more

Pupils are finding out their GCSE results, as a second year of bumper grades is predicted.
Read more

The Supreme Court rules in favour of a woman who was injured climbing a snowbank in British Columbia.
Read more

FAA allows use of drone to help search for...

In February 2013, the nation was gripped by the manhunt for cop killer and former LAPD officer Christopher Dorner. Carter Evans has the story of the new, 120-page report on the event from the Washington, D.C.-based Police Foundation.
Read more

Rate the players in the Euro 2020 quarter-final between Ukraine and England.
Read more

California Gov. Gavin Newsom has urged his exhausted state to dream of brighter days ahead during his annual State of the State address
Read more

Brighton: How early WSL leaders are planning to succeed...

Brighton's fine start to the Women's Super League season is being matched by developments off the pitch as the club invests in progress.
Read more

More than a year after Black Lives Matter protests launched a worldwide reckoning about the centuries of racism that Black people continue to face, reparations emerged — unevenly — as a high-profile issue at this year’s largest gathering of world leaders
Read more

Hong Kong authorities again ban a vigil for the anniversary of the 1989 Beijing massacre.
Read more

Inside Reminiscence, the HBO Max thriller movie inspired by...

TechRadar sits down with Reminiscence’s behind-the-scenes team to find out how its flooded world and memory machine were brought to life.
Read more

Daniel Kaluuya jokes on SNL that royal family was...

Actor Daniel Kaluuya took shots at the British royal family in his opening monologue during his first appearance as a host on "Saturday Night Live" this weekend.The jab came shortly after the British-born actor ...
Read more

The tech helping emergency responders save lives in the...

How technology has helped emergency responders save lives during the pandemic.
Read more

Black history lessons to be made mandatory in Welsh schools