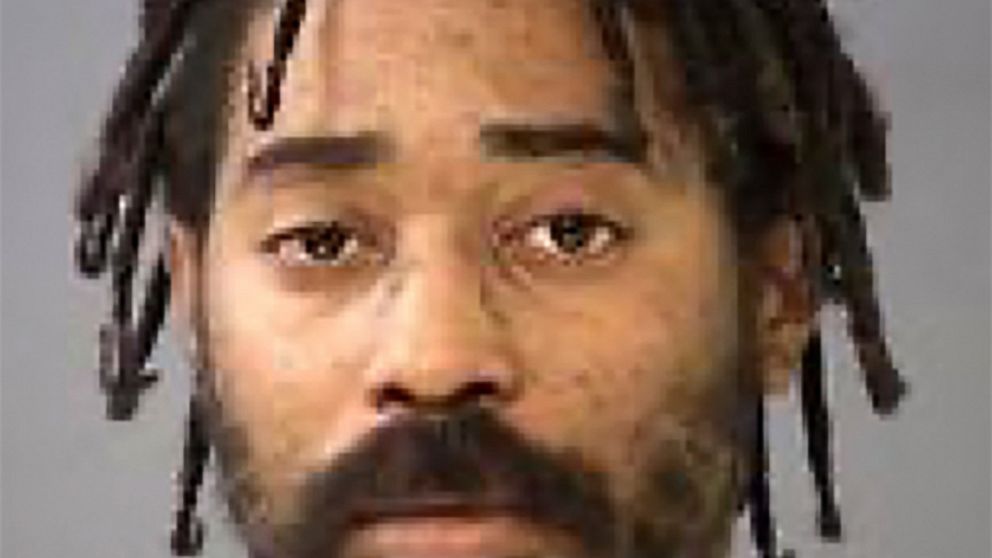 INDIANAPOLIS — An Indianapolis man was formally charged with murder Thursday in the killings of three adults and a child he allegedly shot to death after he and his girlfriend argued because he wanted a share of her federal COVID-19 relief money.

Halfacre allegedly shot his girlfriend, critically wounding her, and fatally shot four others inside a home where officers found the bodies of Anthony Johnson, 35, Dequan Moore, 23, Tomeeka Brown, 44, and 7-year-old Eve Moore.

According to a probable cause affidavit, Halfacre, who was arrested Sunday after being found in the attic of a friends home, admitted to the shootings and told officers that shortly before he opened fire he and his girlfriend were arguing because he wanted some of her stimulus check.

He told officers that after shooting everyone in the home, he took the money, his girlfriends purse and her car, and left the scene with his 6-month-old daughter, according to the affidavit.

The baby was later found unharmed at the home of Halfacres sister, according to the affidavit. Few had more repeated deployments than the Special Operations community after 9/11, another part of the U.S. military transformed by a global war against suicide bombers and a brutal ideology.
Read more

The pandemic has caused many people to feel lonely and isolated. For three women, the isolation is as a result of travelling and having to quarantine in hotels on arrival - Michelle in Australia, Amanda in Indonesia and Charlotte in New Zealand. They tell hos…
Read more

Scotland midfielder John Fleck has tested positive for Covid-19 at the national team's base in Spain.
Read more

New Englanders brace for what could be the first...

Severe weather warnings have been issued across the Northeast as millions of people prepare for what could be the first hurricane to hit New England in 30 years.
Read more

Thousands of industry professionals will attend the International Home + Housewares Show. Vendors want a part of a business that brings in more than $300 billion a year. Anna Werner reports from Chicago on how some companies are using technology to make appli…
Read more

Bradley Walsh will host popular the resurrected game show after the success of a festive special.
Read more

People just want to eat without being pressured.
Read more

Facebook on Wednesday announced that it had taken steps to disrupt efforts of Chinese hacking groups to target and surveil members of the Uyghur community both in China and abroad. Two senior Facebook officials noted in a blog post that a...
Read more

More FBI agents dispatched to Louisville in crackdown on...

More FBI agents are being sent to Louisville, Ky. to assist police in tackling gangs and violent criminals.The additional law enforcement is a part of a larger initiative between the Louisville M...
Read more

Any stay-local rules brought in are likely to vary depending on area, the health minister says.
Read more

Covid: New Aberdeen vaccine base to open on Monday

A new site is to open at the former John Lewis building in the city centre on Monday morning.
Read more

Biden heads to NATO amid friction over Afghanistan withdrawal

European officials say they are frustrated by what they saw as the Biden administration’s failure to sufficiently consult with allies ahead of the announcement.
Read more

Bank governor under fire for role in RBS scandal

Bank of England governor Andrew Bailey is accused of not disclosing a potential conflict of interest.
Read more

Kaley Cuoco ripped a German modern pentathlon coach who came under fire for punching a horse at the Tokyo Olympics.
Read more

Covid: Students call for day of action over fees

The Write Off Right Now campaign says charging full fees for a year of remote learning is unfair.
Read more

Last of U.S. troops have withdrawn from Afghanistan

The U.S. Supreme Court cleared the way for greater compensation for student-athletes in a ruling that may loosen the National Collegiate Athletic Association’s grip over college sports.
Read more

Britney Spears files to remove her father as conservator

In the filings, which ask the court to appoint a neutral professional as the new conservator, Spears' legal team argues that the current situation is "traumatizing, insane, and depressing" for the pop star.
Read more

Even the head of the World Health Organization found its report on the pandemic’s origins insufficient.
Read more

NASA says it has no plans of renaming the James Webb Space Telescope, which was named after a former administrator who permitted the government to discriminate against lesbian and gay employees.Speaking to ...
Read more

Isobel Colnaghi had a severe reaction to the item she was told was safe to eat, a trial hears.
Read more

National security adviser Jake Sullivan on Sunday said the U.S. is preparing to impose additional sanctions on Russia over the poisoning of opposition leader Alexei Navalny.CNN "State of the Unio...
Read more

Children as young as 6 months old now in...

Though children account for a very small portion of COVID-19 deaths in the U.S., experts say children can become infected and transmit to others.
Read more

The Department of Transportation (DOT) is expected to put out a proposal that would require airlines to refund passengers for checked baggage fees if an airline doesn't deliver the bags to passengers soon enough, th...
Read more

Arkansas Gov. Asa Hutchinson (R) signed a hate crimes bill into law this week that advocates have criticized as "a complete overhaul" of another bill that included more specific language cracking down on crimes targeting...
Read more

California’s population dropped for the first time in the...

California's population fell in 2020 for the first time since the state population estimates started being recorded due to Covid-19 deaths, a decline in immigration and a lower birth rate, according to the California Department of Finance.
Read more

Biden on track to pass 100 million vaccinations, with...

The administration will hit its goal well before 100 days, marking an early victory for Biden's pandemic response.
Read more

Trudeau ‘confident’ 2 detained Canadians will be discussed in...

Global Affairs Canada said Thursday that its requests to attend the trial were denied.
Read more

The use of e-cigarettes among teenagers has risen to 2 million and more than 80% of those teens used flavored e-cigs in 2021, study by CDC and FDA says.
Read more

The US apologized for the drone strike that killed...

The Ahmadi family say they are yet to receive any word from the US military, let alone any compensation, one month after a drone strike killed 10 members of their family in Kabul, Afghanistan.
Read more

Administration to release attribution for Microsoft vulnerabilities in ‘coming...

The Biden administration is working to formally attribute the exploitation of vulnerabilities in Microsoft’s Exchange Server application, which left thousands of organizations vulnerable to attack, “in the coming weeks,” a top official said Tuesday...
Read more

Apple to Hold First Product Unveiling of the Year...

Bernie’s not budging and Republicans hope to make hay...

Battlefield 2042 could give the new Call of Duty...

EA DICE has given us our first look at Battlefield 2042 gameplay and we’re seriously impressed. But how will it fare going head-to-head with the new Call of Duty later this year?
Read more

An equity market correction of 5%-10% by the end of the year was the overwhelming consensus in a September market sentiment survey published by Deutsche Bank on Monday.
Read more

A California father is speaking up over an incident involving his son, who he says has autism and ADHD, claiming a police officer punched the 17-year-old in the face, NBC News reports.
Read more

London elections: ‘I don’t feel welcome in this city’

The World Health Organization said coronavirus cases are rising in all regions except Europe, with the largest increase last week seen in Southeast Asia as India battles its biggest wave of infections.
Read more

Ending the death penalty should be part of comprehensive justice reform in the United States and part of our current reckoning with racial inequality. More than half of the states across our nation have abolished the death penalty or halted executions.
Read more

The star brings his three-year-old on stage as he accepts a prize for artist of the decade prize.
Read more

"Heaven does not recognize [Joe Biden] having any scepter nor wearing any crown," the self-described prophet wrote. "From heaven's perspective, there is only the legitimacy of [Trump]."
Read more

Laganja exclusively tells EW: "If anyone is struggling with this, breathe and accept it, because once you do, it’s incredibly empowering!"
Read more

Tech Companies Are (Slowly) Bringing Employees Back to the...

Hi all, it’s Priya. The vaccinations are coming. This week, several counties in and around Silicon Valley—including San Francisco—opened up Covid-19 vaccine eligibility to people over 16. And starting on Thursday, anyone in California who can find an appointm…
Read more

Here’s what VP Kamala Harris has done in the...

A journalist's arrest and a statement from a pro-democracy website show 'chilling' impact on media freedom.
Read more

The woman was caught on CCTV eight days before her body was found in Cresswell Lake, Oxfordshire.
Read more

This weekend's Verizon deals have just dropped a new promotion on the iPhone 12 Mini - here's how to get it for free.
Read more

India receiving $100M in US coronavirus supplies as desperate...

The U.S. announced on Wednesday that it was sending $100 million in coronavirus supplies to India in an effort to provide “urgent relief” as the country grapples with a devastating wave of new infections.
Read more

National Guard members outraged over demands to pay back...

Thousands of California National Guard members might be forced to pay back enlistment bonuses -- at least $15,000 each. The Pentagon moved this week to suspend the efforts to revoke the bonuses. Carter Evans reports.
Read more

A helicopter and nine engines are fighting a grass fire which broke out near a Lake District forest.
Read more

Democrats are riding a wave of newfound confidence heading into Tuesday’s gubernatorial recall election in California as signs show opposition to Gov. Gavin Newsom’s (D) ouster swelling.Tuesday will cap off what for Democrats has been a surprisingly...
Read more

Mets’ deGrom gets clean MRI on shoulder, no plans...

Mets ace Jacob deGrom's shoulder showed no abnormalities, but New York was not yet ready to commit to him taking his next turn in the rotation on Sunday against Washington.
Read more

Props Simon McIntyre and Kieran Brookes are to leave Premiership side Wasps at the end of the season.
Read more

Outflows from Hong Kong’s mandated retirement plan from people leaving the city hit the highest in at least seven years in the three months through June amid China’s tightening grip on the city and strict quarantine measures.
Read more

Miami Beach residents have had enough with spring break partiers taking over their town.
Read more

Residents in Kongsberg react to the bow and arrow attack in their neighbourhood.
Read more

Want to go to space in a balloon? You...

World View is offering the trip of a lifetime -- the opportunity to go to the edge of space. With tickets starting at $50,000, the price-tag is significantly lower than other offerings.
Read more

eBay Tuesdays is delivering over 200 deals for AU$5 or less to Plus subscribers.
Read more

Arizona progressives are looking to fund Senator Kyrsten Sinema's primary challenger as the Democrat holds up President Biden's agenda. Luis Avila, a spokesperson for the the Primary Sinema PAC, and Chuck Rocha, the founder and director of the Nuestro PAC, jo…
Read more