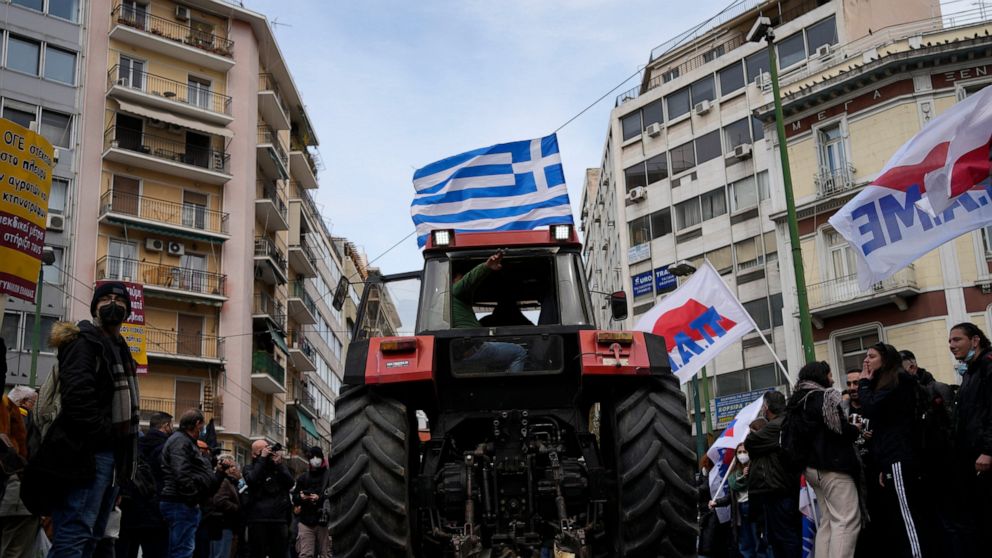 High energy costs are stoking unrest in parts of Europe, with Spain deploying more than 23,000 police officers amid a truckers strike Friday and farmers in France and Greece snarling traffic with their protests.

Russias war in Ukraine has further pushed up costs for oil and natural gas in Europe, driving record inflation and making it ever more expensive for farmers and truckers to fuel their equipment and vehicles, afford fertilizer or keep up with other costs. In Europe, which is dependent on Russian oil and natural gas, the war worsened an energy supply crunch that has driven up costs for households and businesses for months.

A group of mostly self-employed Spanish truckers walked off the job days ago over high fuel prices and other grievances, and it’s devolved into attacks as most drivers continue working. Police in patrol cars and helicopters escorted convoys of trucks along highways and held back picketers Friday, seeking to ensure products like dairy and cement keep moving as some sectors reported supply problems on the fifth day of the strike.

In France, which has seen scattered protests this week against soaring fuel prices, a convoy of about 20 farmers on their tractors in the western Brittany region protested Friday by driving slowly down a highway and blockading a traffic circle, creating tailbacks to draw attention to their plight.

French road haulers and fishing crews have set up temporary barricades in recent days, using their vehicles and burning palettes to block roads.

Meanwhile, hundreds of protesting farmers blocked traffi c in central Athens to demand the government grant them additional concessions to cope with high energy costs. Holding up vegetables and black flags, the protesters, some on tractors, gathered outside the Farm Ministry and planned to head to parliament in the center of the capital.

In Spain, the government repeated its claims that far-right sympathizers are inciting the strike there. Finance Minister María Jesús Montero told reporters that the walkout amounts to extortion, which the far-right is exploiting to prevent produce and food being distributed.

The striking truckers deny far-right links. In a statement late Thursday on their website, they said the government is trying to criminalize and place ideological labels on a sector which only wants to live from its work and which feels excluded and disrespected by the countrys leaders.

The Platform for the Defense of the Road Transport Sector, which called the strike, says it emerged spontaneously in 2008. It was created by six truckers in Spains northwest Galicia region who were disaffected with national trucking associations, its website says.

The group is not affiliated with larger national trucking associations or road haulage companies, and it does not sit at the sectors negotiating table with the government. The group did not immediately respond to a question about how many members it has.

The self-employed truckers are flexing their economic muscle with the strike, however, and are using the walkout to pressure the government to give in to their demands on a range of issues. Businesses in the cement, mining and dairy sectors are among those warning that stocks are running low or that they are having trouble distributing their goods.

The provision of food and basic services is not a trivial matter, Farm Minister Luis Planas said. Its a constitutional issue which has to do with freedom of movement.

The self-employed truckers say what they are being paid to haul loads doesnt cover their costs, which have soared with rising fuel prices. They also claim that large distribution companies engage in unfair competition, forcing down the prices for freight, and demand better working conditions, including retirement at 60.

The Spanish government says it plans to introduce measures against high energy and fuel prices later this month, something that has been done by other governments across Europe as energy prices fuel rising consumer prices.

The unrest comes as the prime ministers of Spain, Portugal, Italy and Greece met Friday to call for an urgent European Union-wide response to the energy crisis to come out of next weeks European Council meeting in Brussels.

Spain’s government said it wants to hold off taking more action on energy prices until seeing what Europe can agree to do. U.S. to ease a few economic sanctions against Venezuela

Its largest lake is so dry, China digs deep...

You can finally play the original Angry Birds on...

Trio of women to host this year’s Oscars: report

John Lennon’s killer tells parole board there was “evil...

England out to emulate Lionesses and Red Roses

Kirk Cousins for MVP? Cowboys in trouble? Plus, who...

Small businesses focus on rising costs ahead of the...

Biden seeks to save what he can from Build...

New data show housing market may be cooling off

Tyson Fury says he will announce his next opponent...

How Border Cities Are Impacted By The Migrant Surge

How Singapore and Hong Kong Stack Up as Financial...

Size, scope of FTX failure gets clearer as users...

Alec Baldwin to turn in cell phone amid ‘Rust’...

How English is becoming a popular option in Algeria

A brief history of activist investors in tech and...

Prince Charles and Camilla arrive in Rwanda for Commonwealth...

US pushes for talks with North Korea after latest...

Femtosense raises capital to power the AI inside of...