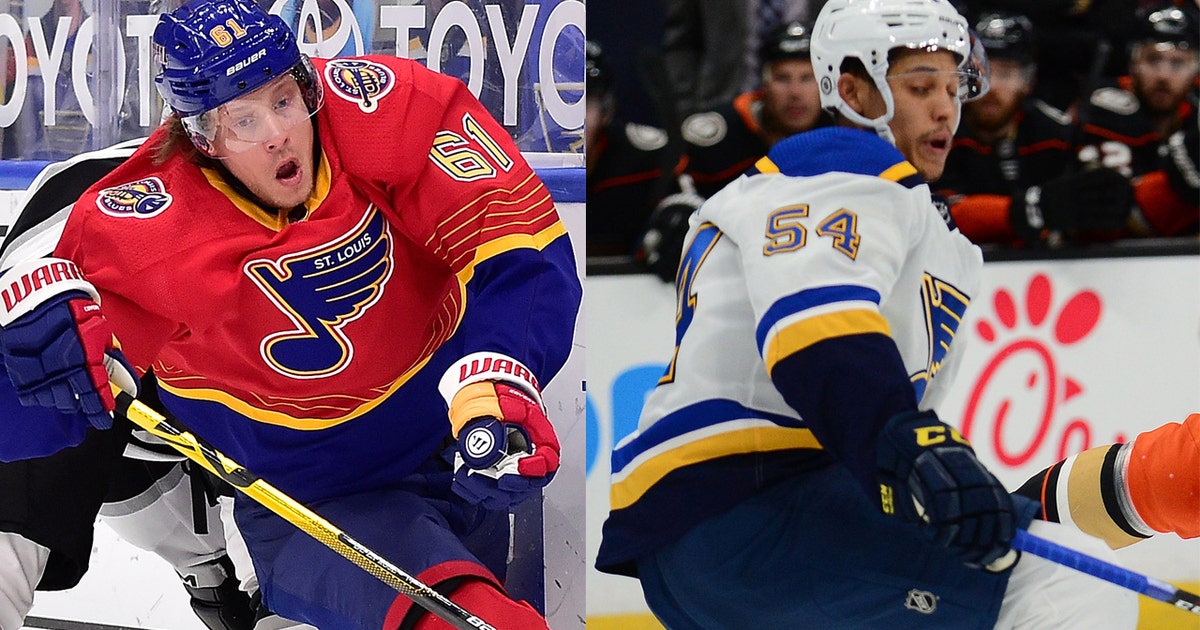 Jacob de la Rose is fully recovered from a lower-body injury and ready to return to the St. Louis Blues‘ lineup if needed.

Unfortunately for the 25-year-old center, his replacement rookie Dakota Joshua has been so impactful that de la Rose will be watching from the press box when the Blues face the Kings on Wednesday night in Los Angeles.

Head coach Craig Berube said Wednesday that he likes what he’s seen from Joshua, who has a goal and a 56.8% faceoff percentage second only to Ryan O’Reilly (59.6%) among Blues centers in seven games this season. He also provided the Blues with a burst of energy on Saturday night when he fought Vegas’ Keegan Kolesar.

Joshua, 24, took over as the Blues’ fourth-line center after de la Rose was injured in the Blues’ Feb. 27 win over the Sharks. de la Rose, who is in his second season with the Blues after being acquired from the Red Wings in exchange for Robby Fabbri in Nov. 2019, has one assist in nine games this season.

Center Tyler Bozak, who has missed all but seven of the Blues’ 28 games with a concussion, will rejoin the lineup on Wednesday night. He’ll fill the void left by Mackenzie MacEachern, who was placed on injured reserve on Sunday with an upper-body injury. One firefighter injured in massive blaze at chemical plant in Passaic, New Jersey

This is the year I conquer the Raspberry Pi

The Ashes: ‘He sent that to the suburbs!’ – Lyon hits three big sixes

The European Union is prepared to have a discussion on waiving international patent protections for coronavirus vaccines after the U.S. declared it would back such a move at the World Trade Organization (WTO).Europ...
Read more

Russian authorities have declared the publisher of an investigative media outlet an “undesirable” organization and listed its journalists as “foreign agents."
Read more

The House committee investigating the Jan. 6 attack on the Capitol is seeking a trove of documents from the prior Trump administration, giving the White House record keepers and other agencies two weeks to turn...
Read more

As a result, some early reservations are already being sold for extortionate prices on eBay.
Read more

Former Las Vegas Raiders head coach Jon Gruden is considering legal options against the NFL and commissioner Roger Goodell after an email scandal revealing racist, homophobic and misogynist remarks earlier this month led to his resignation, according to one r…
Read more

Yadier Molina hit a tiebreaking sacrifice to cap a three-run rally in the sixth inning that sent the St. Louis Cardinals over Miami Marlins 4-2 on Tuesday.
Read more

CNN claims of being unbiased are ‘laughable’: Buck Sexton

Host of the "Clay Travis and Buck Sexton Show" criticized the mainstream network for failing to distinguish between journalists and opinion commentators.
Read more

Abderrahmane Fadil was taken to hospital with "suffocating" Covid symptoms after declining a vaccine.
Read more

Chen Ting is a mother of three and businesswoman who encourages other women to have more children.
Read more

Amazon ‘may have lied to Congress,’ 5 lawmakers say

As Americans try to navigate a return to at least some level of pre-pandemic life, a grocery store in Wisconsin is trying something new to help ease the awkwardness and fear that can come with that.
Read more

Tim Anderson hit a two-run homer on Thursday night to give the Chicago White Sox a 9-8 victory over the New York Yankees.
Read more

The chief of the U.N. refugee agency says the international community and the Taliban will need to find a way to deal with each other for the sake of stabilizing Afghanistan
Read more

Stocks are opening mostly higher on Wall Street, led by gains in airlines and other travel-related companies that would benefit from more reopening of the economy
Read more

A new study finds Americans are losing faith in religion. While nearly eight out of ten Americans called themselves Christians in 2007, fewer do today. Dean Reynolds reports.
Read more

Manchin and Sinema meet with Biden over reconciliation bill...

The president needs all 50 Democrats to vote for his expansion of social spending.
Read more

China could be set for a demographic boom, as the world's most populous country dumps its long-standing one-child policy. The decision by the ruling Communist party opens the door for all Chinese families to have two children. Barry Petersen, who spent more t…
Read more

Scores of people were trapped in a Hong Kong skyscraper on Wednesday after a major fire broke out, authorities said.
Read more

Hundreds of COVID Deaths Still Occurring Each Week in...

A threat actor has published hundreds of thousands of Fortinet VPN credentials to an underground forum.
Read more

Highland Council says interest in campervanning in the region has "intensified" during the Covid pandemic.
Read more

The race for former President Trump’s endorsement in Ohio’s GOP Senate primary is putting several candidates on a collision course that some Republicans fear could hobble the party in the 2022 midterms. Former state Treasurer Josh Mandel touts...
Read more

Hackers behind the breach of cryptocurrency company Poly Network on Wednesday returned almost half of the $600 million in digital tokens they stole following a plea from the company to do so.Poly Network tweeted Wednesday afternoon that $260 million...
Read more

North Korea says it won’t engage in talks with...

North Korea said on Wednesday that it would not be engaging in talks with the United States they believe would not make any progress."We are not considering even the possibility of any contact wi...
Read more

Jack Merritt and Saskia Jones were killed at Fishmongers' Hall, during a terror attack by Usman Khan.
Read more

Polish security forces turned water cannon on migrants who threw rocks from across the Belarusian border, where thousands have gathered in chaotic attempts to cross into the European Union, video footage shared by authorities showed on Tuesday.
Read more

Former President Barack Obama remembered former Sen. Harry Reid, D-Nev., as a dogged fighter who defied the odds to become one of the most powerful and successful politicians in America.
Read more

CT scanning has revealed tantalizing details about the life and death of the pharaoh Amenhotep I for the first time since his mummified remains were discovered in 1881.
Read more

CBO ‘unclear’ when it will have cost estimate of...

The Congressional Budget Office (CBO) said Wednesday that it is "unclear" when it will complete a cost estimate of the entirety of the social-spending package approved by House committees."The legislation being con...
Read more

The former New York mayor and lawyer to Donald Trump is reprimanded over US election allegations.
Read more

What is Bitdefender Central and what can it do&quest;

We examine Bitdefender Central and the benefits it brings to subscribers wanting to manage all their your devices.
Read more

Residents of Carpenters Estate, close to the Olympic Park, voted for thousands more homes to be built.
Read more

Dying to be green: Are mushroom coffins the secret...

Bob Hendrikx, the Dutch inventor of the "Loop" coffin, says it decomposes in weeks instead of years and feeds on the human body.
Read more

Almost seven months into the Biden administration, establishment Democrats are feeling emboldened - and winning races around the country.The trend marks a sharp contrast to just a few years ago, ...
Read more

Bloomberg Markets: China Open is the definitive guide to the markets in Hong Kong and on the mainland. Rishaad Salamat, David Ingles, Tom Mackenzie and Yvonne Man bring you the latest news and analysis to get you ready for the trading day. And powered by more…
Read more

Former President Trump called on President Biden Sunday to have U.S. troops leave Afghanistan before his planned date of Sept. 11, declaring in a statement that the anniversary of the 9/11 terror attacks should remain a d...
Read more

A judge ordered the head of Chicago’s police union to stop urging officers on social media to defy a requirement to report their Covid-19 vaccination status.
Read more

If you love candy, especially during the holiday season, then this Foodie Guide has you covered … in chocolate, caramel, and crushed peppermint candy!
Read more

70 percent of white-collar workers in US still working...

Just over 70 percent of American white-collar workers are still working from home, according to&n...
Read more

Donald Trump’s family-run company reached a deal to sell the rights to its Washington, D.C. hotel for $375 million, after which the property will be branded as Waldorf Astoria, according to people familiar with the matter.
Read more

Sgt Matiu Ratana will be remembered with a minute's silence on Saturday and a service in November.
Read more

The National League will receive an additional £5m of Covid impact funding from the Premier League to assist clubs.
Read more

The justices agreed with a broad range of critics that prosecutors had been misusing the 35-year-old law.
Read more

House Democrats are moving forward with a funding bill to increase the State Department's budget by more than 12 percent for next year, in line with the spending level sought by President Biden.In a voice vote Mond...
Read more

Sniffer dogs trained using smelly socks worn by people infected with the SARS-CoV-2 virus could soon be used at airports or mass gathering venues to pick up the "corona odour" of COVID-19-infected people, British scientists said on Monday.
Read more

Champions Harlequins inflict a first home defeat on Saracens in over three years with a 36-17 bonus-point win in the Premier 15s.
Read more

Welcome to the Brussels Edition, Bloomberg’s daily briefing on what matters most in the heart of the European Union.The EU is watching eagerly to see how the election in its largest economy plays out as Angela Merkel’s tenure draws to a close. Social Democrat…
Read more

Why Google Lens beats its Apple rival and is...

In a fascinating interview about Google's visual search tech, Google Lens guru Lou Wang talks to us about the tech's new Apple rival – and where it's going next.
Read more

The Hill’s Morning Report – Biden: Back to the...

White House: Larry Nassar is a ‘monstrous human being’

Doctors ‘could not have prevented’ man killing friend after...

An inquiry clears doctors of blame after a man killed a friend days after walking out of a psychiatric hospital.
Read more

The FA Cup Final will be among events to only admit fans who get a negative test or prove immunity.
Read more

Paris St-Germain manager Mauricio Pochettino is not fully happy at the club and is open to any approach from Manchester United.
Read more

A new study found that antibody levels were boosted in people who got a shot of the AstraZeneca coronavirus vaccine and then a shot of the Pfizer vaccine, ...
Read more

John Magufuli, Tanzanian Leader Who Scoffed at Covid, Dies at 61