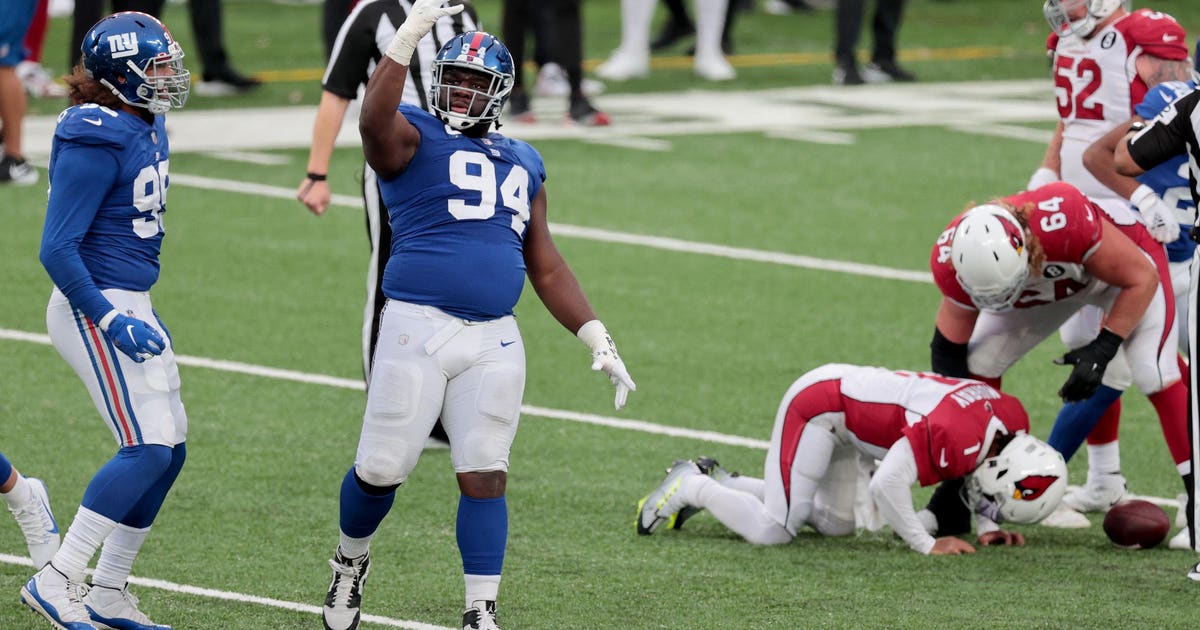 According to NFL agent Mike McCartney, wide receiver Chad Beebe will also be returning to the team in 2021. The Vikings later announced Beebe would be back pending, as with all their deals, a physical.

Selected in the second round of the 2017 draft by the New York Giants, Tomlinson has played all 64 games over the past four seasons. He logged 207 tackles, 21 tackles for loss, five passes defensed and 8.0 sacks for the Giants from 2017-20.

Tomlinson will pair up on the interior defensive line with Michael Pierce, who was last years prized acquisition but opted out of the 2020 campaign due to COVID-19 concerns.

Hill made his NFL debut in 2016 with the Vikings and has spent the past five seasons in Minnesota, playing in 59 games and starting 17. Hes a candidate to fight for the starting left tackle position after the Vikings cut ties with Riley Reiff.

Vigil gives Minnesota more depth at linebacker, a position group that includes Anthony Barr and Eric Kendricks but likely will be without free-agent Eric Wilson. Vigil, a 27-year-old entering his sixth NFL season, racked up 50 tackles and 2.0 sacks last year in 15 games with the Los Angeles Chargers.

Beebe set career bests last season with 20 catches for 201 yards and two touchdowns. Hell be a candidate to take the primary slot receiver role next season. AMD is raising the price of its EPYC CPUs, but favorite customers escape the hike

Nearly three-dozen Texas Democrats on Friday bashed colleagues who returned to the state House floor in Austin this week, a moved that restored quorum to the chamber and likely will allow a GOP elections measure to advanc...
Read more

Christmas 2021: Where in the United States is having...

Here are the parts of the continental United States that are having a white Christmas.
Read more

Los Angeles school board to vote on union COVID...

Los Angeles school board members is expected to vote Tuesday on an agreement approved by the teacher's union on COVID-19 safety protocols for the re-opening of schools in the fall that include the wearing of masks regardless of vaccination status.
Read more

President Joe Biden on Tuesday announced he will nominate Jessica Rosenworcel, the acting leader of the Federal Communications Commission, to become the first woman to serve as permanent chair of the agency.
Read more

Newsom touts California reopening with Minions and a Troll

Starting Tuesday, restaurants, bars and retailers are allowed to operate again at full capacity and without social distancing restrictions, while patrons can go unmasked if they are vaccinated.
Read more

China said Monday it had ordered domestic banks and Ant Group Co. payment platform Alipay not to provide services linked to trading of virtual currencies, tightening the reins on the cryptocurrency industry yet again.
Read more

Elon Musk’s Starlink satellite internet service is under the...

‘Corner starting to be turned’ in Covid battle

The first minister says there are signs a corner is starting to be turned in the current phase of the pandemic.
Read more

A group of virus deniers and anti-vaccination protesters have broken into the building of Slovenia’s public broadcaster, triggering a police intervention
Read more

Nick Kyrgios and Venus Williams' blockbuster mixed doubles partnership gets off to a winning start with a three-set victory over US duo Austin Krajicek and Sabrina Santamaria.
Read more

The bottle was one of 400 miniatures auctioned off by whisky collector Sukhinder Singh. The collection sold for a grand total of nearly $80,000.
Read more

Covid: Restaurants get creative in bid to plug staff...

Gift cards and bonuses are being used to fill vacancies as the hospitality sector emerges from lockdown.
Read more

Former Kentucky state Rep. Charles Booker is jumping into the 2022 Senate race in Kentucky.Booker, a progressive who came within striking distance of the Democratic Senate nomination in 2020, announced his latest c...
Read more

Marco Asensio scores a superb hat-trick as Real Madrid reclaim top spot in La Liga with an emphatic victory over Mallorca at the Bernabeu.
Read more

Watch highlights as all four results remain possible on the final day of the World Test Championship final, after an engrossing fifth day between India and New Zealand.
Read more

Wuhan Scientist Hits Back at Call for New COVID...

In a letter, 18 scientists from around the world have said that more clarity is needed over the origin of COVID-19.
Read more

Ruling could complicate hundreds of prosecutions over storming of Congress on Jan. 6
Read more

Monty the labradoodle, suffering with leukaemia, was "so at peace in Wales", his owner says.
Read more

An 18-year-old college student has been charged with arson over a fire at a synagogue in Austin, Texas, officials said. KEYE’s Ricardo Lewis reports.
Read more

A Marine was relieved of duty on Friday afternoon following a video he posted to Facebook criticizing senior military officials and demanding accountability following a bombing in Kabul, Afghanistan, that killed 13 ...
Read more

Powell, Yellen Weigh in on State of Economy

On November 2, 2020, Jack Ma's Ant Group was gearing up for the biggest initial public offering in history.
Read more

Moldova has made history by buying gas from somewhere other than Russia. How will the Kremlin react?
Read more

Record Store Day offers a sign of hope for...

June 12 marks the first of two Record Store Days being held this year and it offers a signal of hope for independent businesses trying to recover from some of the darkest days they have seen during the Covid-19 pandemic.
Read more

Harris to 2021 grads: Pandemic prepared you for ‘pretty...

Vice President Harris delivered an address to high school graduates on Sunday, telling them the challenges brought on by the COVID-19 pandemic had changed America's graduating class of 2021 for the better."History...
Read more

Did you know the Treasury can legally mint a $1 trillion coin, use it to buy back bonds from the Federal Reserve and reduce the outstanding stock of total national debt, giving the U.S. breathing room under the debt ceiling. Joe Weisenthal explains on Quickta…
Read more

Kneeling Olympians will be shown in highlights, social media,...

The International Olympic Committee (IOC) said that protesting athletes who kneel will be shown in highlights and on social media, ...
Read more

Texas Attorney General Ken Paxton (R) has unblocked critics on his Twitter account and agreed to not block anyone in the future, ending a First Amendment lawsuit against him.The agreement was...
Read more

Accounting firm PwC told Reuters in an interview on Thursday that thousands of its U.S. employees will be able to work remotely indefinitely.The firm will allow 40,000 client services employees based in the United States to be able to live and work...
Read more

Facebook is offering creators more options to make money from their audiences. One method it’s testing is a way to make bank from Stories. Some creators will be able to plug ads that look similar to stickers into their Stories and they'll get a c...
Read more

COVID antiviral pills could be game changer—if you can...

Supplies of antiviral pills from Pfizer initially will be scarce, with some states getting only 100 courses of treatment.
Read more

Why Democrats opposing Biden’s tax plan have it wrong

Wealthy folks like us don't need another handout, but millions of families throughout our nation do need a fully funded, fully functioning government.
Read more

Scottish Premiership clubs will continue to offer pay-per-view matches next season, while discussions continue on a return to grounds for fans.
Read more

‘Sex and the City’ sequel creator looking for ‘slow...

Since entering the NFL in 2016, linebacker Jaylon Smith has worn the No. 54 while anchoring the heart of the Dallas Cowboys defense.
Read more

In the late 1980s and early ‘90s, few American filmmakers were as restless as Oliver Stone.
Read more

Frontline service workers left out of the vaccine mandate...

Requiring vaccines is more complicated in sectors like retail and agriculture, where employers risk losing workers in a tight labor market and vaccine enforcement could be expensive.
Read more

An elderly Asian American man was robbed and assaulted in Oakland, Calif., in what residents are saying is the latest example of violence and discrimination against the community amid the COVID-19 pandemic.Oakland...
Read more

The first U.S. cruise in 15 months sets off Saturday as the industry hopes to make a comeback. Florida law blocked the ship from requiring proof of vaccination.
Read more

Emergent Cited by Panel for Failing to Fix Vaccine...

A probe by the U.S. Congress into Emergent BioSolutions Inc. found that the contract manufacturer failed to address deficiencies in vaccine production at its facilities despite warnings following a series of inspections in 2020.
Read more

A Democrat Hunts for Votes in Trump Country

Lucas Kunce, 38, running for Senate in Missouri, hopes to break the Democratic mold. The post A Democrat Hunts for Votes in Trump Country appeared first on The American Conservative.
Read more

Asian shares are mostly lower, dragged down by a decline in technology stocks on Wall Street
Read more

"We could come and smell the plant, and see the chiles growing. So it's really been a nice morale boost, as well as an interesting science project," said an astronaut.
Read more

President Biden this week will host the first-ever Summit for Democracy, which will focus on strengthening democracy, defending against authoritarianism, fighting corruption and promoting human rights.Biden will de...
Read more

It’s never too late to get your first tattoo.
Read more

US must support Lebanon as it faces economic and...

On the anniversary of one of the largest explosions we have witnessed in recent memory, the Lebanese people deserve steadfast support in their resilient effort towards recovery, while facing one of the most challenging humanitarian and economic crises in a ge…
Read more

Dana White, the president of the Ultimate Fighting Championship, addressed the RNC in Cleveland on Tuesday saying "Trump is a fighter." Watch his full remarks here.
Read more

Houston (AP) -- David Culley spent 43 years as a college and NFL assistant before finally getting his first head coaching job with the Houston Texans.
Read more

The creators have used the flags of competing nations as inspiration to design Japanese warriors.
Read more

Facebook to launch a slew of ‘social audio’ products...

There is perhaps no other social media company so intent on surpassing Clubhouse than Facebook, and the tech giant is set to announce a Clubhouse competitor along with a few other products that put audio in front and everywhere.
Read more

Foreign lobbyists gave more than $33.5 million in political donations during the 2020 election, according to a Thursday report from campaign finance watchdog OpenSecrets.Lobbyists representing foreign clients donated about $125,000 to President...
Read more

As Democrats indicate that they want to tax polluter imports, two lawmakers are laying out a potential roadmap.New legislation from Sen. Chris Coons (D-Del.) and Rep. Scott Peters (D-Calif.), would lev...
Read more

The Red Cross says Indonesia needs to urgently increase medical care, testing and vaccinations as the number of new infections in the country has rapidly increased and left it "on the edge of a COVID-19 catastrophe."
Read more

Roku Sells You TV Dongles. So Why Is It...

The National Republican Congressional Committee (NRCC) will begin soliciting cryptocurrency donations, it announced on Thursday, making it the first national party committee to do so."The NRCC is proud to lead the...
Read more

NASA delays moon landing to ‘no earlier than 2025’

Fed to sell off assets from an emergency loan...

The consultant Dr Michael Watt is at the centre of Northern Ireland's biggest ever patient recall.
Read more

The pope has often spoken out against domestic violence, but Sunday's remarks are his strongest yet.
Read more