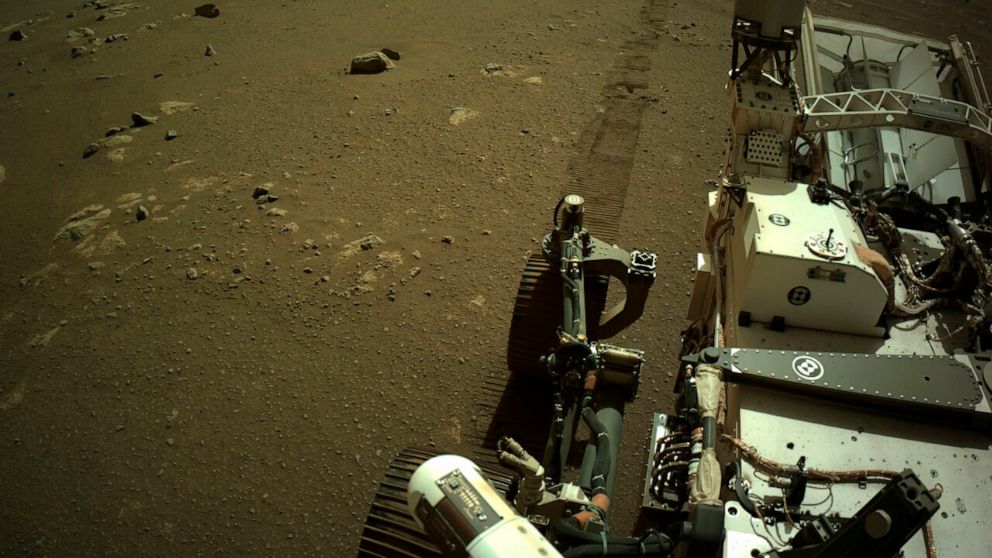 CAPE CANAVERAL, Fla. — NASAs newest Mars rover has sent back the first-ever sounds of driving on the red planet a grinding, clanking, banging affair that by Earth standards would be pretty worrisome.

The noises made by Perseverance’s six metal wheels and suspension on the first test drive two weeks ago are part of a 16-minute raw audio feed released Wednesday by Jet Propulsion Laboratory in Pasadena, California.

If I heard these sounds driving my car, Id pull over and call for a tow, Dave Gruel, an engineer on the rover team, said in a written NASA statement. But if you take a minute to consider what youre hearing and where it was recorded, it makes perfect sense.

Perseverance the biggest, most advanced rover ever sent to Mars landed near an ancient river delta on Feb. 18 to search for signs of past life. Samples will be taken from the most promising rocks for eventual return to Earth.

The rover carries two microphones. One already has captured the sounds of wind and rock-zapping lasers, the other was meant to record the descent and landing. This second mike didn’t pick up any sounds of the rover’s arrival at Mars, but managed to record the first test drive March 4.

The driving audio contains a unexpected high-pitched scratching noise, according to NASA. Engineers are trying to figure it out.

Before it starts drilling into rocks for core samples, Perseverance will drop off an experimental tag-along helicopter, named Ingenuity. The helicopter will attempt the first powered, controlled flight on another planet sometime next month. Stuck on a world tour serving soup in Lahore

A German couple crossed 11 countries before the pandemic halted them en route to India.
Read more

‘MeatEater’ audiobook will be a collection of close calls

Nothing like a terrifying encounter with a brown bear on the island of Afognak, Alaska, to inspire an audiobook project featuring “MeatEater” host Steven Rinella
Read more

August turns into a month of crises as Biden...

Suns vs Lakers live stream: how to watch NBA...

Phoenix are desperate to make a big impression on its return to the postseason. Here's how to watch the Suns vs Lakers series and live stream NBA playoffs action from anywhere.
Read more

Death toll rises to over 700 in Haiti earthquake

Former President Trump on Friday urged the public to buy Missouri Sen. Josh Hawley's (R) new book, in which the GOP lawmaker rails against the influence of large tech corporations like Facebook and Google. ...
Read more

All Rise drops creator and co-showrunner amid accusations of...

The creator and co-showrunner of the CBS legal drama has lost his job amid allegations of inappropriate and racist language in the writers room.
Read more

In 2011, former NSA senior executive Tom Drake appeared in his first television interview. He had been indicted for espionage after leaking to the media allegations that the nation's largest intelligence organization had committed fraud, waste and abuse.
Read more

A bitter family row between the chairman of WH Group Ltd. and his son over succession and management issues has wiped out more than $2 billion of market value in the world’s largest pork processor.
Read more

'Tucker Carlson Tonight' host asks if Anthony Fauci is under criminal investigation after the release of emails that show what the NIAID director knew about the origins of COVID.
Read more

COP26: Tens of thousands of people expected for Glasgow...

An estimated 50,000 protestors are expected in Glasgow to demand action on tackling climate change.
Read more

Toyota planning January return to US headquarters in Texas...

Toyota is planning to return to its US headquarters in Plano, Texas, in January without a COVID-19 vaccine mandate, ...
Read more

Manchester United climb into the top six of the Premier League after an entertaining victory over Burnley at Old Trafford.
Read more

Rumored redesigned MacBook Pros due later in 2021 will use the M1X refresh, with the M2 reserved for the Air next year.
Read more

American Express Co. again delayed its plans for returning U.S. workers to the office, citing the spread of the highly contagious delta variant in setting a new target of Jan. 24 at the earliest.
Read more

Authorities hope to clear the backlog of vessels waiting to use the vital trade route within days.
Read more

Eliud Kipchoge wins the NN Mission Marathon in his final race before he defends his title at the postponed Tokyo 2020 Olympics.
Read more

These three broadband deals from BT, Vodafone and Virgin...

If you're looking for fibre broadband deals this weekend, these three providers will be the way to go.
Read more

The British government says it won’t introduce any new coronavirus restrictions until after Christmas, and called early studies on the severity of the omicron variant encouraging
Read more

An engineering student and a man who was trying...

A mechanical engineering technology student from Illinois and a man who was trying to save his fiancée are among the eight people who died at the Astroworld Festival in Houston Friday night, authorities said.
Read more

A Fargo man returning home from a four-day trip discovered 175 pounds of nuts that had been stashed in the engine bay of his Chevrolet Avalanche by a squirrel. The man had to remove body parts to remove all of the black walnuts.
Read more

McCarthy zeroes in on his 5 GOP picks for...

The list is led by Rep. Jim Banks, chair of the Republican Study Committee, as the ranking member.
Read more

Denise Coates has hit the jackpot yet again.
Read more

A baby cheetah heals with the help of a...

Ruuxa the Cheetah is back on his feet after surgery, and his puppy companion, Raina, is at his side at the San Diego Zoo. They’re best friends - through thick and thin. Shannon Handy reports.
Read more

Glasgow Warriors head coach Danny Wilson says he would be "amazed" if Rory Darge and Rufus McLean were not in Scotland's Autumn Test squad.
Read more

Israel has recorded a steep drop in the efficacy rate of the Pfizer Inc.-BioNTech SE in preventing coronavirus infections, due to the spread of the delta variant and the easing of government restrictions, Ynet news website reported, citing Health Ministry dat…
Read more

In at least one case a child was kept on a coach for four days, waiting to join his family.
Read more

Which type of vacuum should I buy&quest;

Here’s everything you need to know about what different types of vacuums do and are they really any different?
Read more

Attacking fires by air often does no good, expert...

More than three-quarters of air attacks on wildfires are ineffective, according to internal data from the fire command in the autonomous Spanish region of Catalonia, whose head researcher is calling for major changes in how the warming world battles...
Read more

Heather Mac Donald, the author of "The War on Cops," says police departments across the US are having recruitment issues and the situation will likely not improve
Read more

Deutsche Bank AG said it will allow its U.S. interns to decide if they want to work from home or be in the office this summer.
Read more

Biden gets set to meet with Putin in Geneva...

President Biden is set to meet with his Russian counterpart Wednesday, as election meddling and cyberattacks have caused a major rift between Washington and Moscow. Nancy Cordes reports from Brussels.
Read more

U.K. inflation slowed unexpectedly in February as clothing and footwear prices fell at their sharpest pace for the month in more than 30 years.
Read more

SoFi Sued by SEC Over Conflicts in Proprietary ETFs

Rio Tinto Ltd (RIO.AX) is trialing new technology that would use biomass in place of coking coal in the steelmaking process, the company said on Thursday, adding it could be a cost-effecti…
Read more

Why there’s fear that the Bosnian War could reignite

Sinovac says its vaccine is safe for children as...

Sinovac says its COVID-19 vaccine is safe in children ages 3-17, based on preliminary data, and it has submitted the data to Chinese drug regulators
Read more

It is important to continue our efforts to increase mental health services and access for all Americans, but it is especially important to ensure our nation's children are among the first in line.
Read more

While homelessness plagues the city of Seattle, one Christian group that looks to help those in need is fighting for the ability to hire those who share its faith and message.
Read more

Biden and Putin hold “positive” summit in Geneva despite...

President Biden finished the first European tour of his presidency with a face-to-face meeting with Russian President Vladimir Putin on Wednesday. Both leaders described the talks as "positive" and "constructive" despite ongoing divisions over Russia's human …
Read more

Asian stocks slumped to their lowest levels this year and the dollar hit 10-month highs on Thursday as a double-whammy of worries about global growth and an end to central bank support drove nervous investors toward safety.
Read more

Netflix wants to build a film set for its hit series near ancient woodland on Crown Estate land.
Read more

Misty Copeland on How Race Informs Her Art, and...

The dancer sits down for a Q&A as part of Bloomberg’s new “Black in Focus” series.
Read more

Abdul Qadeer Khan, the man known as the father of Pakistan's nuclear weapons program, has died in the Pakistani capital Islamabad, according to the country's Ministry of Information. He was 85 years old.
Read more

The Scottish Liberal Democrats pledge to prioritise the recovery from the Covid pandemic in the next session of the Scottish Parliament.
Read more

iPhone 13 Pro looks to have a much bigger...

An image of an iPhone 12 Pro in an iPhone 13 Pro case suggests the camera bump is getting bigger.
Read more

‘Friends: The Reunion’ delivers the one with a lot...

Chelsea Clinton is calling on Facebook to ban Fox News host Tucker Carlson from the platform following a surge in online engagement with a post that included the conservative television personality's speculation on ...
Read more

At least one mill in Western Canada has been forced to curtail production because of plunging lumber prices and soaring log costs.
Read more

The state is expected to begin the process of removing the pedestal on Monday, according to a statement from Gov. Ralph Northam.
Read more

Star Wars experience and more revealed on the new...

When the summer of 2022 arrives, so will the debut of Disney Cruise Line's latest addition to its fleet: the Disney Wish.
Read more

It's looking increasingly unlikely that the Florida Republican-controlled Senate will pass a bill that would ban transgender females from participating in girls' and women's sports teams.
Read more

Pupils will learn how social media can make an impact, by studying the player's campaign work.
Read more

Millionaires urge Democrats to include billionaire tax in spending...

A group of about 250 millionaires on Monday urged top Democrats to include a proposal to tax billionaires' investment gains annually in their social-spending package, after the proposal was left out of a framework the Whi...
Read more

Biden to meet with 6 GOP senators next week

President Biden will hold a meeting next week with six Republican senators as he looks to pass his sprawling infrastructure plan through Congress.
Read more

Singapore to no longer offer free COVID-19 treatment to...

Singapore announced on Monday that it will stop covering the medical bills of its citizens infected by COVID-19 if they are "unvaccinated by choice" starting next month.The government has been footing the medical b...
Read more