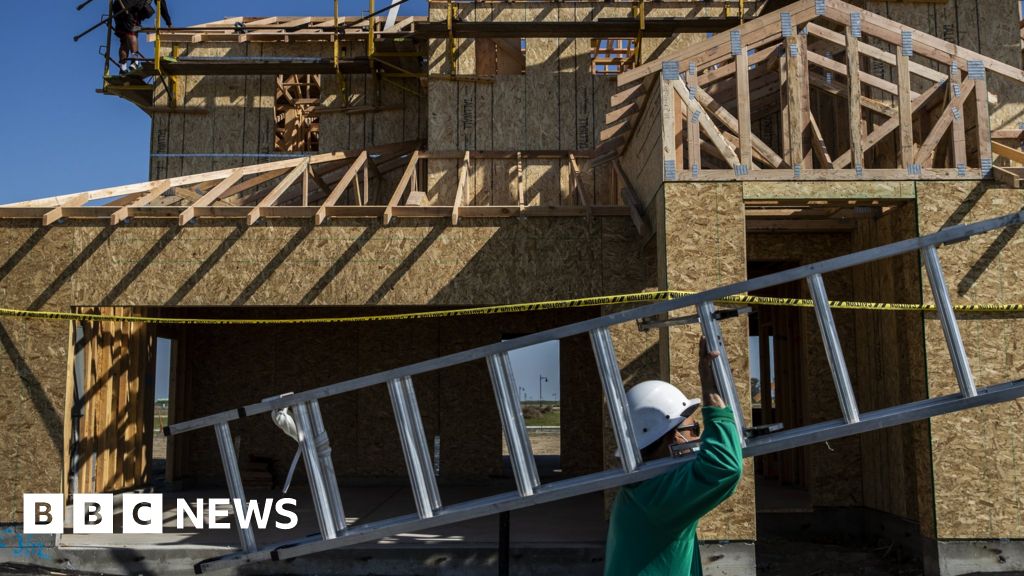 The US central bank expects much stronger growth this year than previously forecast, as vaccination rates rise and government relief funds start flowing into the economy.

The Federal Reserve forecast average growth of 6.5% this year – up from 4.2% officials predicted in December.

The outlook for recovery in the jobs markets has also brightened, the Fed said.

Despite the upgrade, officials did not move to raise interest rates.

And most members expect to keep borrowing costs near zero until after 2023, according to the projections released by the Fed after its regular meeting.

“Following a moderation in the pace of the recovery, indicators of economic activity and employment have turned up,” the Fed said.

Share prices on Wall Street jumped after the announcement. Scotland’s papers: PM in ‘peril’ and Scots return to the office

Flyers with anti-Semitic language distributed in neighborhoods across South Florida; also reported in 5 other states

A Reckoning Looms for Poland and Hungary

Aaron Rodgers broke his silence about his decision not to get vaccinated. Mola Lenghi explains why he is now losing support from sponsors as well as the football and medical communities.
Read more

Time’s Up fires staff after its CEO, chair admitted...

Time’s Up announced a “major reset” Friday, claiming the women's rights organization would be “rebuilt from the ground up."
Read more

Ghana Surprises With Rate Cut as Inflation Is Seen...

Ghana Surprises With Rate Cut as Inflation Is Seen in Targetbloomberg.com
Read more

China’s Old Growth Drivers are Here to Stay in...

After fueling its V-shaped recovery by boosting spending on housing and infrastructure, China appears in no rush to drop its investment-led growth model despite international calls for it to “rebalance” its economy.
Read more

The signatories of the historic normalization agreements want the coalition to strengthen cooperation but also to ease Palestinian tensions and champion the two-state solution.
Read more

Glaxo R&D Chief to Step Down as Company Prepares...

GlaxoSmithKline Plc’s research and development chief is set to step down from the role this year after the company splits in two, becoming chief executive of a Silicon Valley startup.
Read more

New cannabis coalition wants to influence how — not...

The group includes representatives from the alcohol, tobacco and insurance industries.
Read more

New Orleans residents are ushering in Carnival season, hoping the annual weekslong celebration can be held safely amid a surge of COVID-19 infections
Read more

"On the morning of September 6, I provided an abortion to a woman who, though still in her first trimester, was beyond the state's new limit," the doctor wrote.
Read more

Newly obtained high school yearbook photos give a glimpse of Gabby Petito and Brian Laundrie as teenagers, years before their ill-fated cross-country road trip as a travel-blogging couple.
Read more

Maybe it’s the sinking poll numbers or the rising prices, but the White House is already confronted with questions about the President’s plans for 2024. And after just ten months in office, spokesman Jen Psaki has already tried to reassure the press, and his …
Read more

Anthony Mackie gets the last laugh after Tom Holland’s...

Jordan Strauss on the Markets (Radio)

France rallies EU as trust in US, UK and...

Sen. Marsha Blackburn Swipes Back At Dr. Fauci After...

Listen To The Full Interview Below: Senator Marsha Blackburn (R-TN) joined Fox News Radio’s Guy Benson Show to talk about comments made by Dr. Fauci after the doctor accused her of ‘attacking science. Senator Blackburn responded by saying , “Oh, my goodness. …
Read more

The high cost of treatment for an addict

CBS News has been following the story of Jason Amaral, a Boston man struggling to break free from the grips of heroin addiction. Correspondent DeMarco Morgan and producer Jonathan Blakely continue their series with a look at the high cost of addiction -- and …
Read more

How to connect PS5 controller to your iPhone or...

Investor doubts over China Evergrande Group intensified on Monday as a creditor’s successful demand to freeze some assets underscored concern that the embattled developer may struggle to raise funds.
Read more

UK inflation more than doubles to 1.5% in April...

British consumer price inflation more than doubled in April to stand at 1.5%, up from 0.7% in March, official figures showed on Wednesday.
Read more

Senior medical correspondent Dr. Tara Narula sat down with three nurse managers at Mount Sinai in New York City to talk about a groundbreaking program made to help health care workers fighting on the front lines build resiliency and help them heal in the wake…
Read more

Families of Beirut blast victims back judge amid pressure

The primary transponder on board Malaysia Airlines Flight 370 was turned off, making it difficult for air traffic controllers to detect the plane. Now, 12 days into the search, Jeff Pegues reports on the questions as to why these systems can be switched off a…
Read more

Under pressure, Democrats cut back spending

Democratic lawmakers are swiftly cutting back their spending on the Build Back Better agenda after President Biden made clear to progressive lawmakers that the package will spend far less than they had hoped on key priori...
Read more

Behind the First Mutual Fund-to-ETF Conversion

The partnership is looking to fill 7,000 temporary roles across its shops, department stores and warehouses.
Read more

Manchester United manager Ole Gunnar Solskjaer signs a new deal with the club until 2024, with an option for a further year.
Read more

A move by Texas Gov. Greg Abbott to shutter dozens of shelters housing about 4,000 migrant children is threatening to disrupt a national program offering care for minors who cross the U.S.-Mexico border
Read more

Wimbledon, England (AP) -- Ash Barty got off to a perfect start in the Wimbledon final by collecting the first 14 points, then...
Read more

There were at least 9 mass shootings across the...

A gunman opened fire at a family birthday party in Colorado Springs leaving six people dead and a community in mourning. It was one of nine mass shootings across the US since Friday night.
Read more

Arch Manning says this college has a ‘home feel’

Five-star recruit Arch Manning certainly has one college on his radar.
Read more

Guinea coup: What has been the regional reaction to...

Ecowas has condemned the coup in Guinea threatening with sanctions unless the president is released.
Read more

The hack that changed the world

In 2009, someone broke into the Climatic Research Unit of the University of East Anglia in the UK and stole emails. The material was distributed online - mainly on blogs linked to climate change sceptics. It was used to make the case that scientists were surr…
Read more

We romanticize the possibility of visitors from above to distract us from our failures to love our neighbors here below. The post Against UFOs appeared first on The American Conservative.
Read more

Ukrainian President to accomplish years-long quest for a White...

Ukrainian President Volodymyr Zelensky is set to meet with President Joe Biden in Washington on Wednesday, the culmination of a years-long struggle to get a White House visit locked up that -- at one point -- saw him at the center of US politics.
Read more

Spain’s Suarez Navarro gets Olympics ticket in bid to...

Carla Suarez Navarro is one among eight Spaniards selected to compete at the Olympic Games in Tokyo next month, the Royal Spanish Tennis Federation has said, giving the veteran player a fitting farewell before her retirement.
Read more

Conservative conference: Johnson on Thatcher and tax and NHS

Azeem Rafiq says he is "incredibly disappointed" that England captain Joe Root said he could not recall ever witnessing racism at Yorkshire.
Read more

Stefan Liesche at IBM explains how Confidential computing is revolutionizing a wide range of digital relationships - from healthcare to personal finances.
Read more

The move comes as tensions grow between the US and China over the status of Taiwan and trade issues.
Read more

‘Master of None’ offers a radical new take on...

'Moments of Love,' the third season of 'Master of None' starring Lena Waite Naomi Ackie, is a radical portrayal of Black queer love and longing that defies stereotype while pushing the envelope on representation at a crucial time in American life and art, say…
Read more

The emergency services were alerted to the diver at about 17:35 on Sunday.
Read more

Regulators in Beijing are planning rule changes that would allow them to block a Chinese company from listing overseas even if the unit selling shares is incorporated outside China, closing a loophole long-used by the country’s technology giants, according to…
Read more

A judge throws out some of Coleen Rooney's defence in the latest stage of the libel battle.
Read more

Powell: Fed ‘not at all sure’ inflation will fade...

Chair Jerome Powell said Wednesday that the Federal Reserve can’t be sure that inflation will fade in the second half of next year, as many economists expect, a fresh sign of the Fed’s growing concern about rising prices
Read more

The bribery trial of Paul Manafort’s banker could hinge on a debate about the value of top federal jobs.
Read more

Switzerland is set to allow same-sex couples to marry, 20 years after the Netherlands became the first country to do so, according to a trend projection for Sunday’s ballot by the national broadcaster.
Read more

Google Messages will auto-delete OTPs and categorise like Gmail...

Google has rolled out a new update for its default SMS client on Android, Google Messages. The update finally adds the ability to categorise messages and the app will use machine learning to sort your SMS texts.
Read more

Afghanistan: The pledge binding al-Qaeda to the Taliban

The history of the complex relationship between the two groups.
Read more

India has asked Tesla Inc. to ramp up local procurement and share detailed manufacturing plans before the carmaker’s demands for lower taxes on electric vehicles are considered, a person with the knowledge of the matter said.
Read more

Android app makers suing to stop Alphabet Inc's (GOOGL.O) Google from siphoning up to 30% of their sales received little reassurance about their chances on Friday as a judge allowed a com…
Read more

Babes in the Wood: Killer’s ex-girlfriend guilty of perjury

The president speaks to "CBS This Morning" co-host Norah O'Donnell about trusting China to push its climate change efforts, and the importance of greater transparency and accountability of countries negotiating a global climate deal in Paris.
Read more

Amazon’s Alexa is coming to smartphones

A year after New Year’s Day passed without a Rose Parade due to the coronavirus pandemic, the floral spectacle celebrating the arrival of 2022 is set to proceed despite a new surge of infections
Read more

He had a hit with his breakout single "Old Town Road," about a horse-loving hip hop cowboy. But for his debut album, "Montero," the multiple-Grammy-nominee wrote songs about his real life as a gay man.
Read more

The 15-year-old died outside his home in Handsworth, Birmingham, after being stabbed and shot.
Read more

The Kansas City Chiefs and the family of Ariel Young have devised a plan to help support the 5-year-old girl who was left critically injured in a crash involving former coach Britt Reid, officials said in a statement.
Read more

McConnell: Schumer 'yielding to the pressure of the hard left' on filibuster