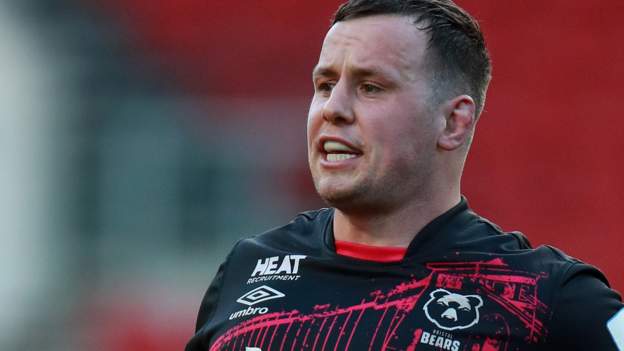 Bryan Byrne previously made 47 appearances for Leinster before joining Bristol

Bristol Bears hooker Bryan Byrne and winger Niyi Adeolokun have agreed to extend their contracts with the current Premiership leaders.

Byrne, 27, initially made the move to Ashton Gate on a short-term loan from Leinster in February 2020 before it became permanent in July.

He has scored twice in the Premiership so far this campaign, at Harlequins in December and against Wasps last Friday.

Byrne has also scored seven tries so far this season in some impressive displays in the Bears’ front row.

“Bristol is a great place to be,” he said. “It’s a club that’s going places with a great group of lads here.” Matthew McConaughey speaks out against mask hesitancy amid rumors...

Matthew McConaughey spoke out against mask hesitancy during an interview about a potential run for office in Texas.
Read more

Suspect arrested in connection with University of Utah player’s...

Investigators said the shooting was not gang related.
Read more

Northern California's Butte County, the site of the state's deadliest and most destructive inferno ever in 2018, is now battling another blaze.
Read more

Rare white wallaby spotted on the hop in Kenilworth...

The marsupial is captured on camera by a farmer working in a field on Tuesday.
Read more

The US defence department is scrapping a cloud computing contract, which sparked a row between Amazon and Microsoft.
Read more

Treasury: $590M paid out by victims of ransomware attacks...

A report released by the Treasury Department Friday found that around $590 million had been paid by victims of ransomware payments to their attackers in the first six months of 2021, as such attacks skyrocketed. ...
Read more

Patrick Grady will relinquish his House of Commons job until an investigation is completed.
Read more

President Joe Biden and first lady Jill Biden had been speaking with children about Santa Claus and what they wanted for Christmas.
Read more

Chapelle called out for ‘hostile transphobia and homophobia’ in...

A Black LGBTQ advocacy organization and GLADD are calling out Dave Chappelle for "ridiculing trans people" and for "hostile transphobia and homophobia" in his latest Netflix special.The button-pushing comedian debu...
Read more

German luxury automaker BMW (BMWG.DE) said on Thursday its factories in China plan to reach carbon emissions neutrality by the end of this year, while its total carbon emissions in its Chinese production chain will fall 80% by 2030.
Read more

How to Set Up Your New Xbox Series X/S

There are a few things you'll need to do before you can jump right into Halo: Infinite
Read more

The council says it was designed to attract people to Driffield, not generate negative publicity.
Read more

Top Indian government officials are debating whether to set a goal to zero out its greenhouse gas emissions by mid-century, an ambitious target that would require overhauling its coal-dependent economy.
Read more

The Paramount Pictures action sequel “Top Gun: Maverick” will be released in November, four months later than expected, as the studio reshuffles its calendar.
Read more

President Biden on Wednesday morning swatted a cicada off his neck ahead of his trip to Europe for the G-7 Summit.
Read more

The Bad News and the Good News

Ordinary Americans are still resoundingly patriotic. The post The Bad News and the Good News appeared first on The American Conservative.
Read more

Getting a booster shot of the single-dose vaccine strengthens people's immune response, according to the drugmaker.
Read more

Journalist covering Portland clashes says she was attacked by...

An independent journalist says she was "attacked by ‘antifascist’ protesters" in Portland, where they damaged her property and shot paintballs at her, during weekend unrest, according to reports and details shared on social media.
Read more

France is preparing to offer an alternative to AstraZeneca Plc’s Covid-19 vaccine for those under the age of 55 who have already had their first jab with the product.
Read more

Most remote workers want their employer to cover home...

Poor internet is one of the main factors preventing employees from staying productive while working from home.
Read more

China’s banking and insurance watchdog is stepping up scrutiny of the nation’s insurance technology platforms, widening a regulatory dragnet that has roiled global investors.
Read more

There’s more than one way to catch a fish.
Read more

The state is not offering a religious exemption to hospital and nursing home workers who risk losing their jobs if they are not vaccinated.
Read more

The Only Path Forward is National Conservatism

We must restore cultural sanity in part by means of the return of God to the public square. The post The Only Path Forward is National Conservatism appeared first on The American Conservative.
Read more

It says alternative provision should be found for the majority of 31 branches being closed.
Read more

John Carlson tied the game late in the second period and then scored Washington's third and final shootout goal to give the Capitals' a 4-3 victory over the Anaheim Ducks on Monday night.
Read more

President Joe Biden is set to unveil a plan to give more Americans coronavirus vaccine booster shots to head off the delta variant, a move that is stoking criticism that the U.S. is hoarding doses while poorer nations continue to languish under the pandemic.
Read more

How Trump’s deal with Moderna hampers the global vaccine...

Operation Warp Speed poured billions into Moderna and agreed not to share its vaccines abroad. Now the company is holding up the race to vaccinate low-income countries.
Read more

Uber reports rides are skyrocketing as people get vaccinated

Uber said Monday that it recorded its highest monthly gross bookings in company history in March from Uber and Uber Eats as more Americans got vaccinated.The company's ride hailing business had its best month since...
Read more

Sen. Marco Rubio (R-Fla.) is calling for the Biden administration to investigate Amazon’s distribution of employee benefits in the wake of new reporting by The New York Times.The newspaper reported this weekend that the e-...
Read more

Hospitals in Australia’s most populous state risk being overwhelmed by Covid cases by the end of the year if the government’s reopening plan is executed, according to modeling from public health body OzSAGE, released Monday.
Read more

This unloved Microsoft Teams feature is getting an upgrade

Microsoft has announced that 35 new features are coming to Teams to make remote learning easier for both teachers and students.
Read more

China says US increasing military activity directed at it

China says activity by U.S. military ships and surveillance planes directed toward it has increased significantly under the Biden administration
Read more

The Arlo Pro 4 offers only an incremental update over the Arlo Pro 3, so just how does it differ from its predecessor?
Read more

Individual in custody after ‘incident’ at Joint Base Andrews

An individual is in custody amid an ongoing security incident at Joint Base Andrews in Maryland, according to officials.The base confirmed to The Hill on Friday evening that "security forces personnel are respondin...
Read more

American Airlines has canceled more than 1,000 flights since Friday, according to the flight-tracking site FlightAware.The flight cancellations have occurred in part due to staffing shortages, according to internal tallies obtained by CNBC....
Read more

Gardeners are being urged to be on alert for the stink bug and other pests predicted to arrive in the UK.
Read more

Hundreds of thousands of Cubans have begun receiving new, locally produced vaccines against COVID-19 in the past few days as the socialist government ramps up an inoculation campaign
Read more

Zimbabwe's justice minister accused the country's judiciary of being "captured" by foreign forces seeking to destabilise the government after the High Court ruled it was illegal to extend the tenure of the chief justice by five more years.
Read more

The head of women's tennis says he is not certain Peng Shuai is free of Chinese censorship or coercion.
Read more

Naz Shah MP says her children were forced to flee the family home after she received death threats.
Read more

Robinhood Markets Inc. said personal information of millions of customers was compromised in a data breach last week and that the culprit demanded a payment.
Read more

Indian Commerce Minister Piyush Goyal has ratcheted up the heat on U.S. ecommerce giants like Amazon and Walmart, accusing them of arrogance and of flouting local laws by indulging in predatory pricing practices.
Read more

Learn where to find N95 masks still in stock, plus how to ensure they aren't counterfeit
Read more

David Kudla on the Markets (Radio)

Latinos on television shows continue to be underrepresented and creative leaders have said there are systemic and cultural issues preventing real change.
Read more

A review of the Black Shark 4 Pro has gone up early, showing us the design of the phone and its audio quality.
Read more

New Zealand opener Devon Conway completes a double century with a six on a brilliant Test debut against England at Lord's.
Read more

The cool temperatures are expected to return to normal by the end of the weekend.
Read more

Shatner pushes back on Prince William over space flight...

Kyle Rittenhouse's defense attorney Mark Richards said Friday that he threw Fox News host Tucker Carlson's crew "out of the room several times" while they were filming footage for a documentary about the teen during...
Read more

Nick Alexander died at a Paris rock gig during the assault by Islamic State (IS) extremists in 2015.
Read more

Rescue Under the Sea: Disney Helps Save Florida’s Coral...

For the past year, a dedicated team of Disney aquatic wildlife experts and conservationists have been working on a special mission to help save Florida’s coral reefs from the rapid spread of stony coral tissue loss disease, which has put 22 coral species at r…
Read more

What to expect from the star-studded Vax Live fundraiser

How Many Children Does Cristiano Ronaldo Have?

Legendary soccer player Cristiano Ronaldo has returned to the English team Manchester United F.C. for the current season, bringing his children with him.
Read more

"This really unlocks one of the secrets of nature," said Thomas Perlmann, secretary-general of the Nobel Committee.
Read more

Are Allbirds Good for Walking, Comfortable and Vegan? And...

Hertz on track to exit bankruptcy protection this month

A bankruptcy court has confirmed Hertz’s reorganization plan, which helps clear the way for the car rental company to emerge from Chapter 11 bankruptcy protection by the end of the month
Read more

Intel continues to take Apple break-up badly with launch of ‘I’m a...