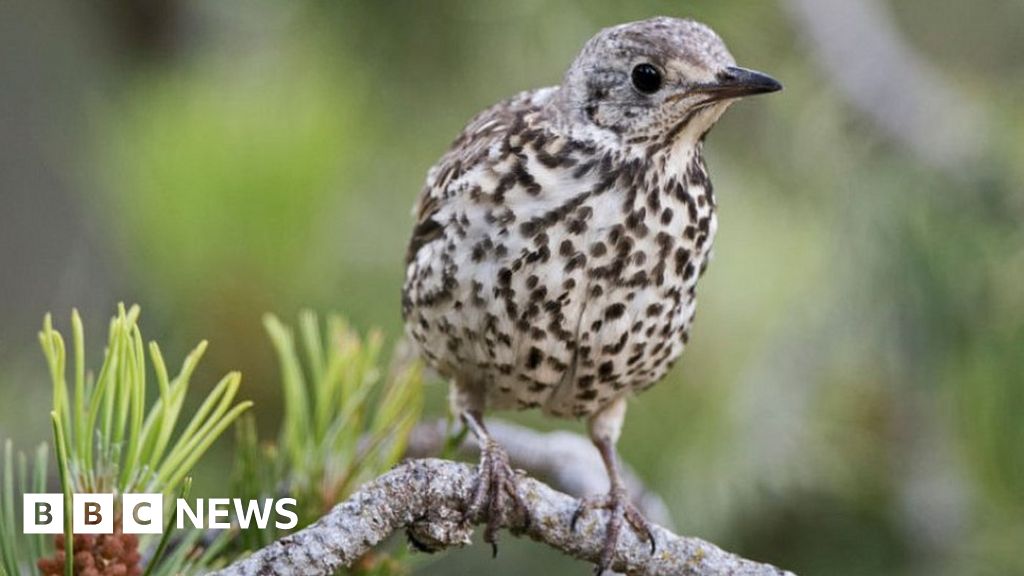 The controversial practice of trapping birds on glue-covered twigs cannot be allowed even as a tradition, the European Court of Justice has ruled.

French hunters were told to suspend glue-trapping last summer when the European Commission warned it could take legal action.

Conservationists have condemned the practice as barbaric.

The Court said the fact that a method of hunting was traditional did not mean another solution should not be used.

Glue-trapping in recent years has been confined to areas of south-eastern France after Spain banned the practice of coating sticks in lime. French hunters argued that it only harmed particular species such as thrushes and songbirds.

France’s League for the Protection of Birds (LPO) then challenged the practice known as “chasse à la glu” at the European Court in Luxembourg, arguing that it harmed not just songbirds but other birds too.

In July 2020 the European Commission warned France that it was not complying with EU law on hunting and capture practices for birds, prompting President Emmanuel Macron to order a halt to glue-trapping the following month pending the ECJ’s final ruling.

In its decision on Wednesday, the Court said no EU country could allow a method of hunting birds that led to unintentional capture of birds (by-catch) “where that by-catch is likely to cause harm other than negligible harm to the species concerned”.

It was highly likely that even if birds were cleaned they would still sustain “irreparable harm” from limes that damaged the feathers of any bird captured.

The LPO hailed the ruling as the culmination of a long fight. Electricity infrastructure in Wester Ross was damaged and part of the roof of a school in Inverness was blown off.
Read more

How China and Evergrande Are Trying to Avoid Disaster

More than a decade after the U.S. subprime crisis sparked the Great Recession, the real estate sector triggers a new calamity.
Read more

Poor website accessibility could be costing your business billions...

Arsenal charged with ‘failing to ensure players conduct themselves...

Arsenal have been charged by the Football Association with failing to ensure players conducted themselves in an orderly fashion during Saturday's home defeat to Manchester City.
Read more

Myanmar's military leader Senior Gen. Min Aung Hlaing declared himself prime minister of the country on Sunday, saying he planned on being in charge for two years during an extended state of emergency before holding an el...
Read more

Asif Islam, of the Dhaka Tribune, calls into CBSN and provides an update on the hostage situation in Bangladesh.
Read more

The remains of an 8-year-old boy were found in a Houston home, left with his abandoned siblings. His mother and her boyfriend were arrested.
Read more

Uttar Pradesh: Why deadly cow attacks are an issue...

Max Scherzer struck out 13 in his hometown and Chris Taylor hit a two-run homer, leading the Los Angeles Dodgers to a 5-1 victory over the St. Louis Cardinals on Monday.
Read more

Why is this French doctor throwing away vaccines?

France has had a low uptake of the AstraZeneca vaccine which is creating stockpiles of the drug.
Read more

He said the Justice Department is examining voting laws to "determine whether they discriminate against Black voters and other voters of color."
Read more

Enbridge Inc. won the latest round in its long-running battle to stop Michigan’s governor from shutting an oil pipeline that crosses the Great Lakes after a judge ruled that the case should remain in Federal court.
Read more

PUBG Mobile is coming back to India as Battlegrounds Mobile India. Here’s how to download it, release date, differences and other information.
Read more

‘Making the Cut’ Season 2 Final: What the Winner...

"Making the Cut" on Amazon Prime is about to crown its second winner—and the prize package that Gary or the two Andreas could win is bigger than ever.
Read more

Biden heads to Florida to comfort those affected by...

The president will visit Surfside, Florida, to offer comfort to those affected by the deadly building collapse as the search and rescue effort continues. CBS News correspondent Christina Ruffini joined CBSN to discuss the president's plans for the trip and wh…
Read more

Around 500 people and 100 elephants die every year in India, as the country's growing population encroaches on wildlife habitats. Finding ways for humans and elephants to co-exist is becoming increasingly urgent.
Read more

The OnePlus Nord 2, which was launched last week was only available for Amazon Prime members during the Prime Day sale, and now the device is available via open sale.
Read more

Trump set to do at least 12 book interviews...

“Donald doesn’t believe in the concept of ‘no comment.’”
Read more

Jonathan Johnson spent weeks on a ventilator battling COVID-19, then decided to get married — in the hospital
Read more

Real Madrid are monitoring Liverpool and England defender Joe Gomez but understand he would not be available to sign in the January transfer window.
Read more

A bill moving through the North Carolina legislature that seeks to limit treatments for transgender people under the age of 21 will not advance after a top state lawmaker said that the proposal will not receive a vote fro...
Read more

In his first primetime address, the president presented himself as a national father to a skeptical nation. The post Here’s the Deal appeared first on The American Conservative.
Read more

Former Fulham midfielder Kevin McDonald is aiming for a return to playing after having a kidney transplant.
Read more

Get vaccinated if you want to play Australian Open,...

Tennis players planning to compete in the Australian Open at Melbourne Park should get vaccinated for COVID-19 to give themselves the best chance of playing the Grand Slam, an Australian government official has said.
Read more

Walmart Inc. said fully vaccinated staff and customers can now leave their masks at home, a decision that could influence how other businesses respond to the latest government guidance.
Read more

A North Carolina-based hospital system has fired 175 employees for failing to comply with its COVID-19 vaccine mandate.Novant Health had said last week that approximately 375 of its 35,000-member workforce was non-compliant with the...
Read more

The Samsung Galaxy Watch 4's virtual bezel left a lot to be desired, but a new firmware update could change its fortunes.
Read more

Fans of late comedy icon Betty White are planning to celebrate what would have been her 100th birthday by organizing mass donations to a cause that was very near and dear to her heart.
Read more

Dame Mary Beard calls for educational disadvantage to be...

The Cambridge professor is funding scholarships for two disadvantaged students as she retires.
Read more

The CEO of the statewide hospital group said the situation is "dire" and the Department of Defense's support is "desperately needed."
Read more

From a Colorado Pilsner Slow Pour that requires over 24 hours to fill its fermenter to a Chinese Double IPA which costs less as the air quality worsens, here's but a small sampling of craft beers from expert Mark Dredge's new book.
Read more

Chinese leaders are preparing a political history that would give President Xi Jinping status beside the ruling Communist Party’s most important figures, setting the stage for Xi to extend his rule next year
Read more

Former President Obama gave his first interview since leaving office to Britain's Prince Harry. It was recorded in Toronto in September and broadcasted on BBC radio. Topics ranged from the dangers of social media to climate change. Barry Petersen reports.
Read more

A California county has prohibited gatherings of over 50 people indoors and over 100 people outdoors in an effort to combat the spread of the COVID-19 omicron variant. In addition to the limits o...
Read more

At least 22 people, including 10 children, died in a popular mountain resort town in Pakistan after being stuck in their vehicles overnight during a heavy snowstorm
Read more

Barbara Comstock: If Trump disappeared there wouldn’t be many...

Former Virginia Republican Rep. Barbara Comstock said on Sunday that if former President Trump went missing, "I don't think you'd have many Republicans in the search party."Comstock made the remark while appearing...
Read more

Attorneys for Ghislaine Maxwell are set to ask a federal judge that prospective jurors for her criminal trial be questioned individually.
Read more

Three people were reportedly killed and 100 wounded after a crackdown on mass protests on Saturday.
Read more

Its $70m takings mean it is the most successful film to be released since the start of the pandemic.
Read more

A Look Back at Fan-Favorite Experiences That Have Returned...

Destination D23 2021 is wrapping up today! As it comes to a close, let’s take a look at all of the fan-favorite experiences that are back at Disney parks and cruise ships, as celebrated during Josh D’Amaro’s presentation yesterday.
Read more

After a huge crash two weeks ago, Microsoft says users are reporting issues with game streaming and purchases on Xbox Live.
Read more

Hales denies ‘any racial connotation’ in naming his dog

Former England international Alex Hales "categorically and absolutely" denies there was "any racial connotation" in naming his dog.
Read more

Hacker claims to have combined a Clubhouse scrape of billions of phone numbers with the user’s Facebook profiles.
Read more

Flashing lights and smashing world records. Is this the...

Flashing lights on the side of the track -- a bit like a disco -- and snazzy "made to fly" Nike spikes played a part in delivering two world records in the space of an hour in Valencia, Spain on Wednesday as track and field fans got a glimpse of what the futu…
Read more

In his first television interview on the subject, Grammy Award-winning artist Ryan Lewis opens up to CBS News Correspondent Ben Tracy about his mother's struggle with HIV and their new initiative to help others with the disease, the 30/30 Project.
Read more

The Thrusters Behind NASA’s Mission to the Asteroid Psyche

Novak Djokovic is the centre of attention as he bids to win an historic 21st Grand Slam men's title at a US Open missing some of the big-name stars.
Read more

The baby, or kit, was born to a pair of Eurasian beavers introduced to Wild Ken Hill last year.
Read more

Holyrood backs legislation extending some emergency powers due to expire in September for an extra six months.
Read more

Sen. Joe Manchin (D-W.Va.) on Wednesday said he will not guarantee he'll support a fast-track process for a sweeping infrastructure package, rejecting a key demand by progressive senators who want such a pledge...
Read more

A Texas bakery was "overwhelmed" with supporters and well-wishers last week after facing backlash for posting a cookie to honor Pride Month in the U.S.The bakery, Confections, located in Lufkin, Texas, shared image...
Read more

A cryptocurrency data network run by some of Wall Street’s biggest players showed a roughly 90% plunge in Bitcoin on Monday, a glitch that didn’t show up on other platforms.
Read more

US, Russia meet for talks amid tensions linked to...

Senior U.S. and Russian officials are formally launching special talks on strategic stability as part of a flurry of diplomatic activity in Europe this week aimed at defusing tensions over a Russian military buildup on the border with Ukraine
Read more

Bloomberg Westminster: Protests Can and Should be Inconvenient